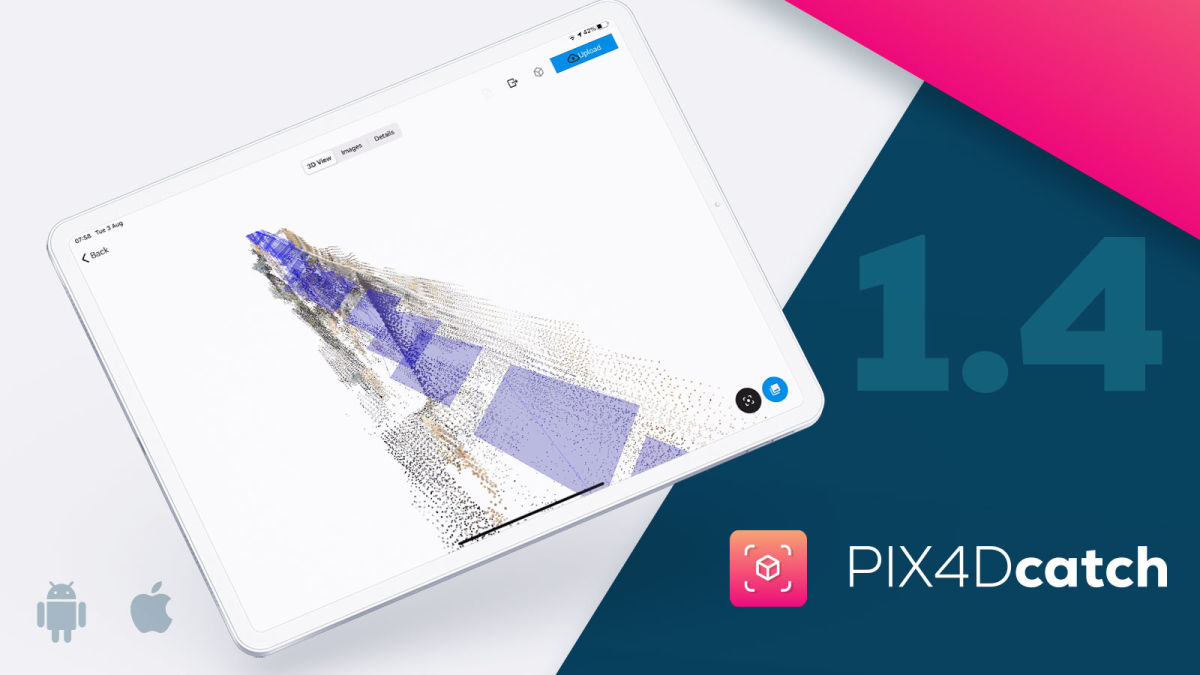 August 10, 2021
The newest releases of PIX4Dcatch have exciting updates for both iOS and Android platforms that can revolutionize your workflows.

PIX4Dcatch empowers users to create accurate and high-quality ground-based 3D models. Now iOS devices can upgrade to version 1.4, and Android devices to 1.2. Data collected with PIX4Dcatch on a mobile device can be processed using Pix4D's processing solutions such as PIX4Dcloud, PIX4Dmapper, PIX4Dmatic, or any other photogrammetry software.

The latest changes to PIX4Dcatch make the application even more user-friendly, with live preview options during and after data capture, and the flexibility to specify the coordinate system of your choosing when using the viDoc RTK rover.

Preview of depth-based point clouds in the app

PIX4Dcatch works by users holding a handheld device and scanning their surroundings with its camera. Before completing a capture, it is beneficial to gain insights on whether sufficient coverage has been achieved. This is what the preview feature now provides.

The preview makes data collection even better, though there are the PIX4Dcatch best practices to guide users scanning terrestrial data. Now, as PIX4Dcatch is used to scan an area of interest, they will get a live preview of their scene along with the camera positions. This feature is coming to both Android and iOS users who have LiDAR or ToF sensors in their devices. During data collection, users can pause and check the coverage by looking at the coarse point cloud or through the positions of the camera. Toggle between top-view and camera view to identify insufficient coverage issues early on. This feedback will prevent problems after processing, saving time as it minimizes the need to return to a site following data capture!

Similar to the live preview, the quick project preview enables a user to visualize the coarse 3D model of the project on both Android and iOS devices after data collection. This coarse 3D model is based on the depth point cloud and is generated in real-time using LiDAR and ToF. It is not a fully processed pointcloud, as shown below when compared to a point cloud in PIX4Dcloud.

The coarse point cloud is like a snapshot of what your project looks like pre-processing in PIX4Dcloud
This coarse point cloud can then be exported as a PLY file to visualize in any third-party visualization tool. Alternatively, the project can be uploaded to PIX4Dcloud and processed based on photogrammetry and LiDAR combined to create high-quality 3D models. With PIX4Dcloud users can process, analyze, and share their data captured with PIX4Dcatch, as in this project. The cloud-based platform can be used to measure volumes, distances, and track changes over time.

The final change is only relevant to users using the viDoc RTK rover with PIX4Dcatch (iOS). The viDoc RTK rover is a handheld device that geotags the images captured in PIX4Dcatch using RTK accuracy of better than 5 cm, thereby creating highly accurate 3D models. It turns a consumer device into a handheld professional surveying tool.

We know how important coordinate reference systems are to geospatial professionals. Hence, in the latest version of PIX4Dcatch tailored for the viDoc RTK rover, we provide users the flexibility to define a coordinate system of their choice before uploading it to PIX4Dcloud for processing.

To receive real-time geolocation data, the viDoc RTK rover needs to be connected to an NTRIP service provider through the internet. There are several of these providers across the world and each of them sets the coordinate reference system with which the GNSS data and real-time corrections will be transmitted.

Select the input coordinate system you want to use

Thus, when trying to establish a connection with the viDoc RTK rover from the PIX4Dcatch app, users can specify the input coordinate system that should be assigned to the geolocation data received by the rover.

Define output coordinate system of your choice before uploading to PIX4Dcloud

Following data capture using PIX4Dcatch with the viDoc RTK rover, the next step is to process the data to create high quality 3D models. Those using the cloud-based solution PIX4Dcloud can now specify the coordinate reference system of their choice before starting the upload process.

This includes the definition of horizontal and vertical reference frames including specifying geoids (check the list of supported geoid models).

PIX4Dcatch is a game changing tool for surveying, taking advantage of the latest features of mobile phones and tablets and using them for creating high quality models spanning diverse applications. The app will continue to evolve to suit the needs of our clients, pushing the limits of what we can achieve with photogrammetry.