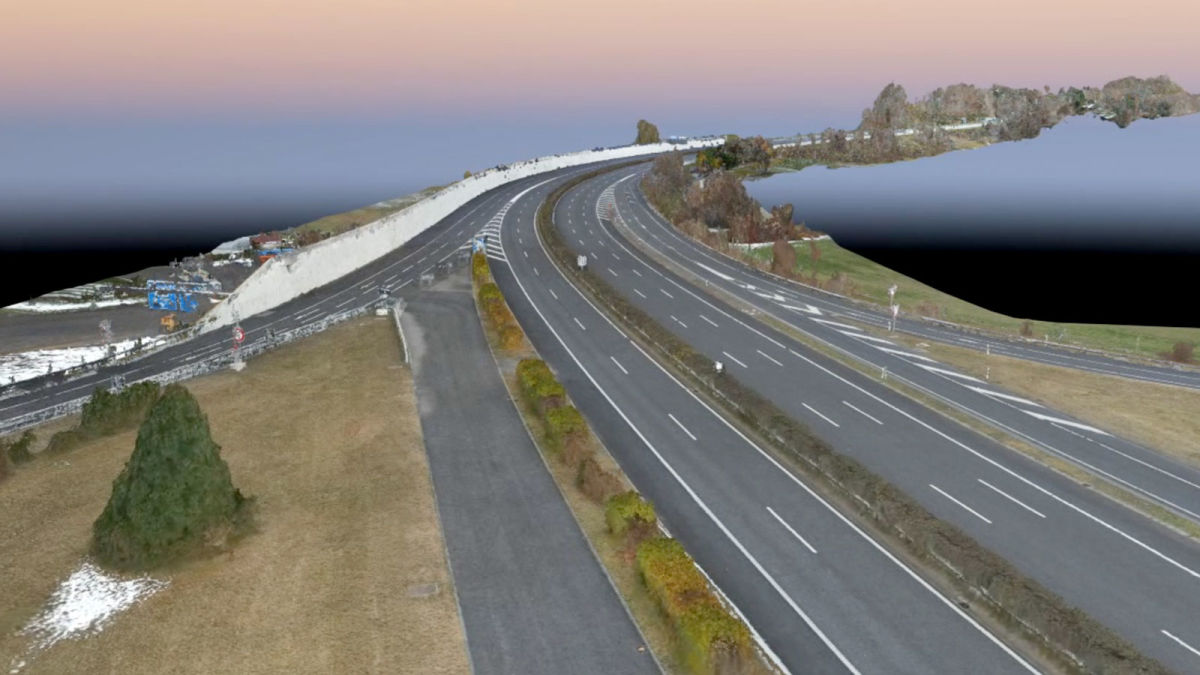 Using drones to survey a motorway without stopping traffic

July 5, 2022
A motorway in Switzerland needed to be inspected - but it was on a viaduct in the mountains. Discover how aerial drone maps helped.

Switzerland has a motorway network of more than 1,400 kilometers. These transport people and goods from the valley plateaus to the highest passes of the Alps. Maintaining those highways keeps the country functioning smoothly. It’s easy to see how important highway maintenance is, but minimizing disruption when fixing roads or identifying faults is the challenge.

Aerial road mapping makes this easier, and surveyors need to identify key elements of the roads - such as manholes, culverts, and plinths. For a successful road survey, these objects need to be identified with accurate coordinates to a degree of accuracy with a maximum error range of 10 centimeters. Due to Switzerland’s mountainous topography, an added challenge is that some of these roads are on bridges or viaducts. Their condition is critical to know, but hard to access. Data collection must be balanced with road survey safety - such as keeping inspectors safe as well as not distracting drivers.This is why aerial data collection with drones is very useful in analyzing road conditions even in difficult-to-access locations. Aerial road surveys can be done quickly, safely, and without compromising on the level of detail required.

A 3D model of a motorway allows for a safe, complete inspection

Studio Calastri uses drones and laser scanners for land and building surveys. They are based in the Italian part of Switzerland in Sementina. They were contracted to do a survey by the Swiss Federal Roads Office, USTRA. They needed to survey existing road features, including the walls or guardrails nearby. Studio Calastri did the survey without temporarily closing the highway to minimize disruption. They chose to use specialized photogrammetry software PIX4Dmapper to process their aerial images, and then PIX4Dsurvey to extract and vectorize the dataset. A faster option could be to use PIX4Dmatic, which is specially designed for large scale and corridor projects, for faster processing prior to export to PIX4Dsurvey. 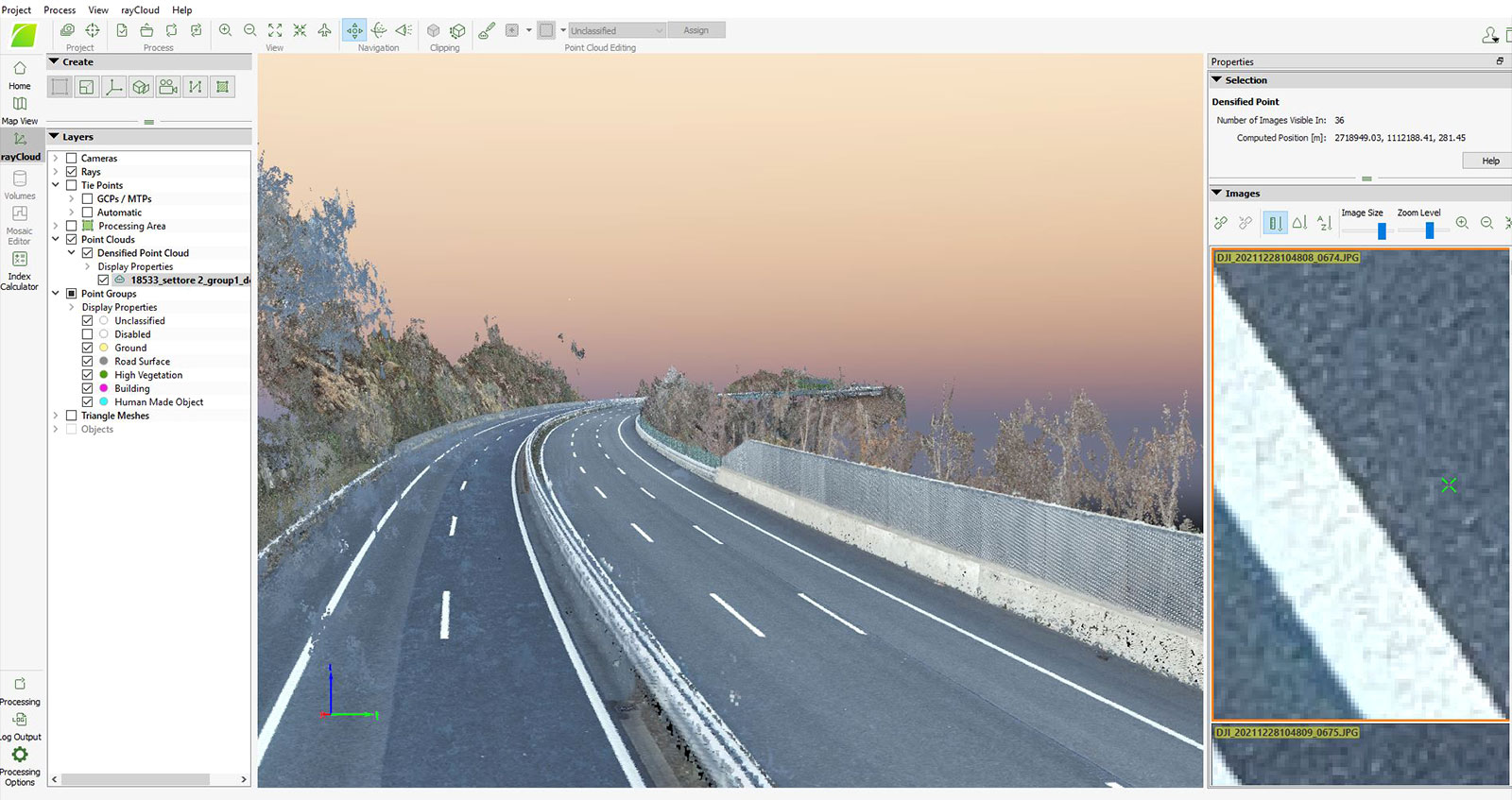 The dataset was initially processed with PIX4Dmapper

How to survey a viaduct in the Alps with drones

The viaduct in question spanned a large distance and had a 250 meter change in altitude across it due to being on a mountainside. This would make it difficult to obtain a unique ground sample distance because flying at a consistent altitude would see changes in the ground sample distance (GSD) after processing. Instead, Studio Calastri wanted to get a dataset that could render a basic digital surface model instead. The survey took place in January 2022, mid-winter in Switzerland, so they planned to take the survey in the morning to minimize distortion caused by shadows moving in changing light.

Studio Calastri used a DJI Matrice 300 RTK drone, with the Zenmuse P1 camera. They completed data collection over 3 mornings, and gathered 4000 images. Although cars were on the road during their surveys, thanks to getting overlap between images and the technology behind PIX4Dsurvey, they knew this would not be an issue when vectorizing and extracting elements. 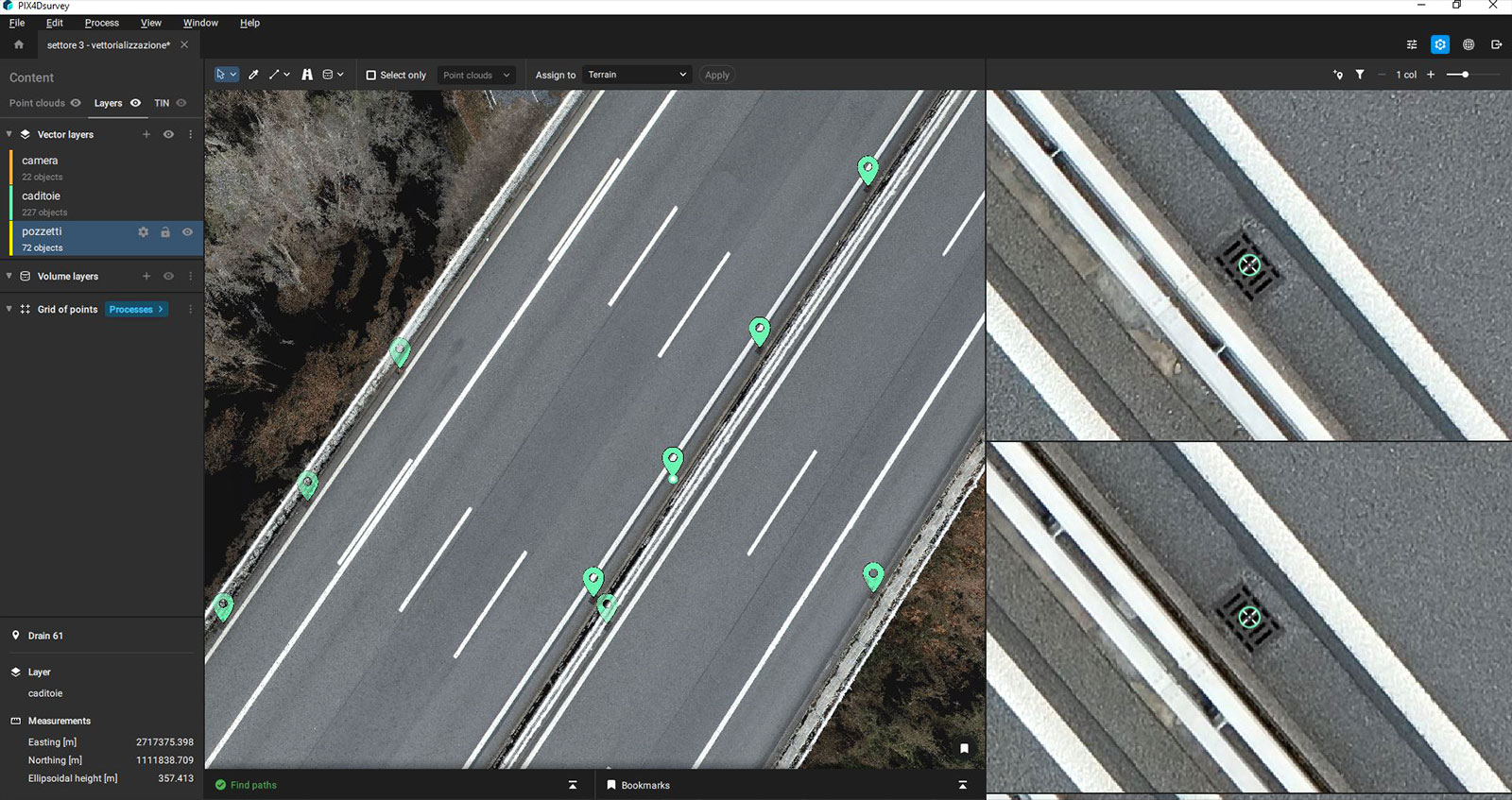 Some road features can be automatically extracted by PIX4Dsurvey

The images were processed with PIX4Dmapper, and thanks to using an RTK drone, the dataset was accurate to within 10 centimeters. This specific accuracy was requested by USTRA. Then the 3D point cloud was exported to PIX4Dsurvey.

PIX4Dsurvey is specialized software for vectorizing and analyzing the terrain from photogrammetry projects or point clouds. It has automatic feature extraction tools and the terrain filter removes non-terrain features like cars from the dataset - meaning that despite collecting imagery when the road was in use, Studio Calastri could see the entirety of the roads. The software automatically identified the manholes and drains. Objects that were close to artifacts (such as the walls and guardrail) were extracted manually from the point cloud or directly from images. 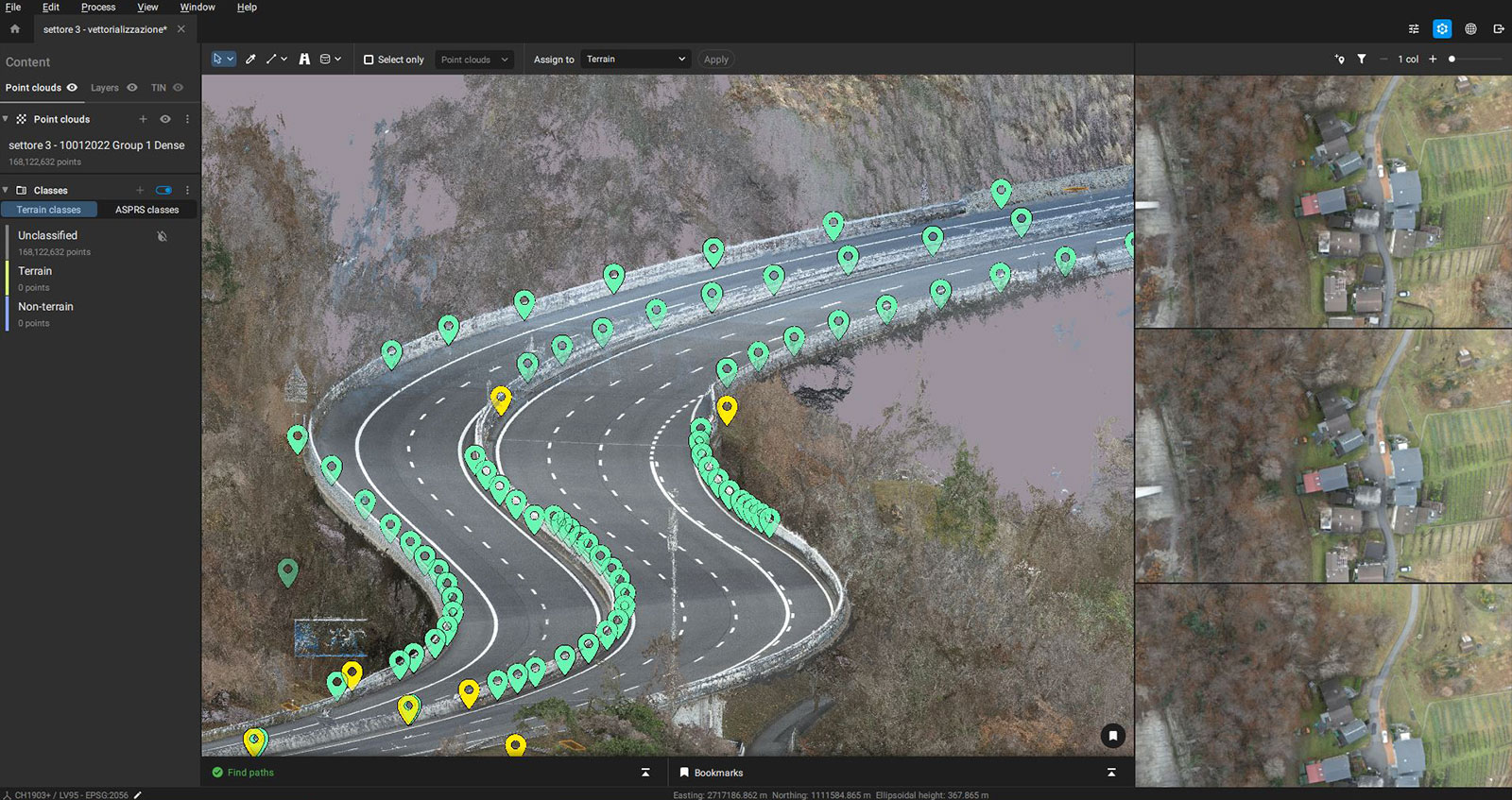 Once the necessary data had been extracted, it was exported to CAD software. PIX4Dsurvey bridges the gap between photogrammetry and CAD which makes the entire workflow from data collection and processing to CAD seamless. Its specialized features for terrain analysis and classification makes it a useful tool for professional surveyors.

The project by Studio Calastri was successfully delivered to USTRA, with an overall GSD of 1.26 cm, giving a high degree of detail over the road conditions. This is ideal for maintenance planning and also updating USTRA’s records.

“Pix4D is the tool you need in the office after a good flight with your drone to deliver results to your customer in the easiest way,” - Giacomo Cariboni, Geomatics Digital Models Department at Studio Calastri

This project can be replicated and expanded by Studio Calastri to other roads in Switzerland and the local region because it is straightforward and minimizes disruption. The Studio is a long-term user of Pix4D software and trusts that the accurate results will be ideal for large scale surveys and creating reliable results.