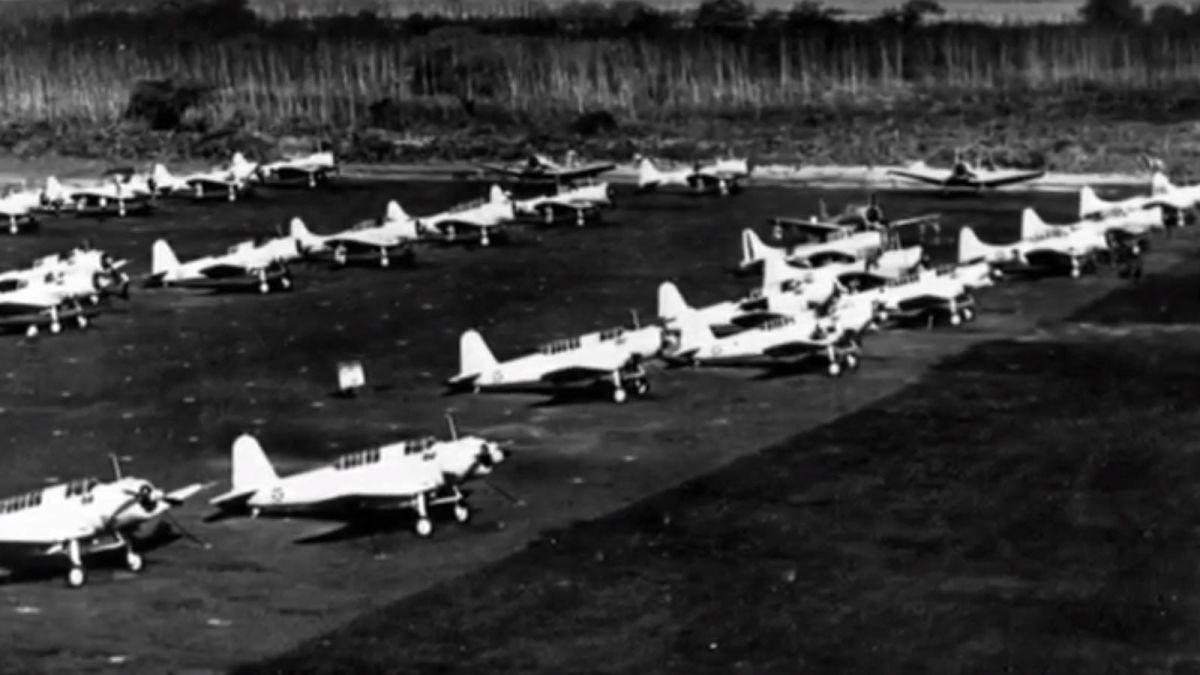 October 9, 2019
“There are few places you can look at where history changed in an instant. This is one of them.”

The series opens in Pearl Harbor, at the site of the infamous attack which claimed more than 2,000 lives and pushed the United States into the global war. 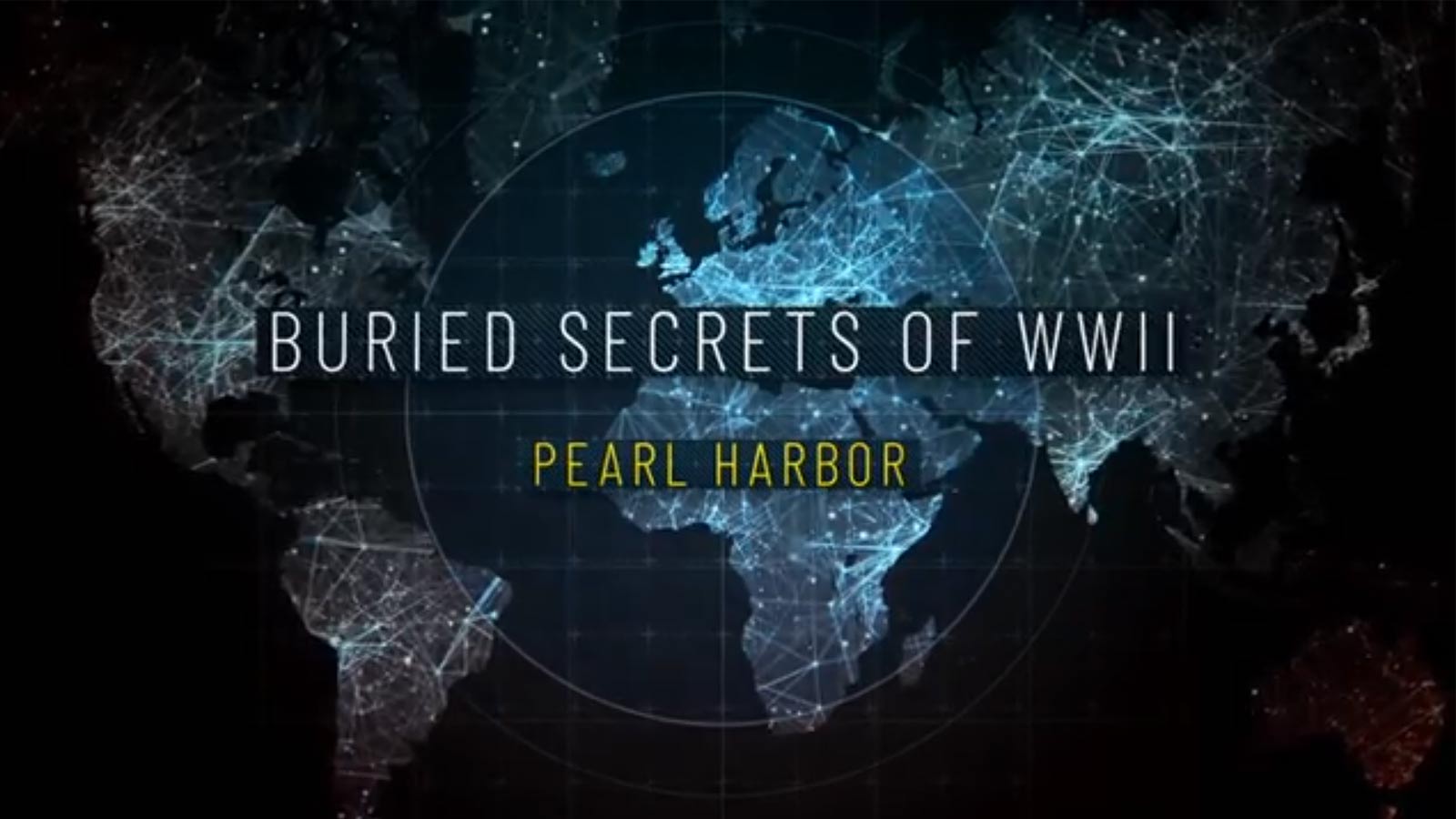 Find out more about the episode

Mapping the beginning of a conflict

Lying 1,200 feet below sea level, and some three miles from Pearl Harbor, is the remains of a Japanese mini submarine (type A KO-Hyoteki). The vessel was sunk by the Destroyer USS Ward mere hours before the December 7, 1941 attack. 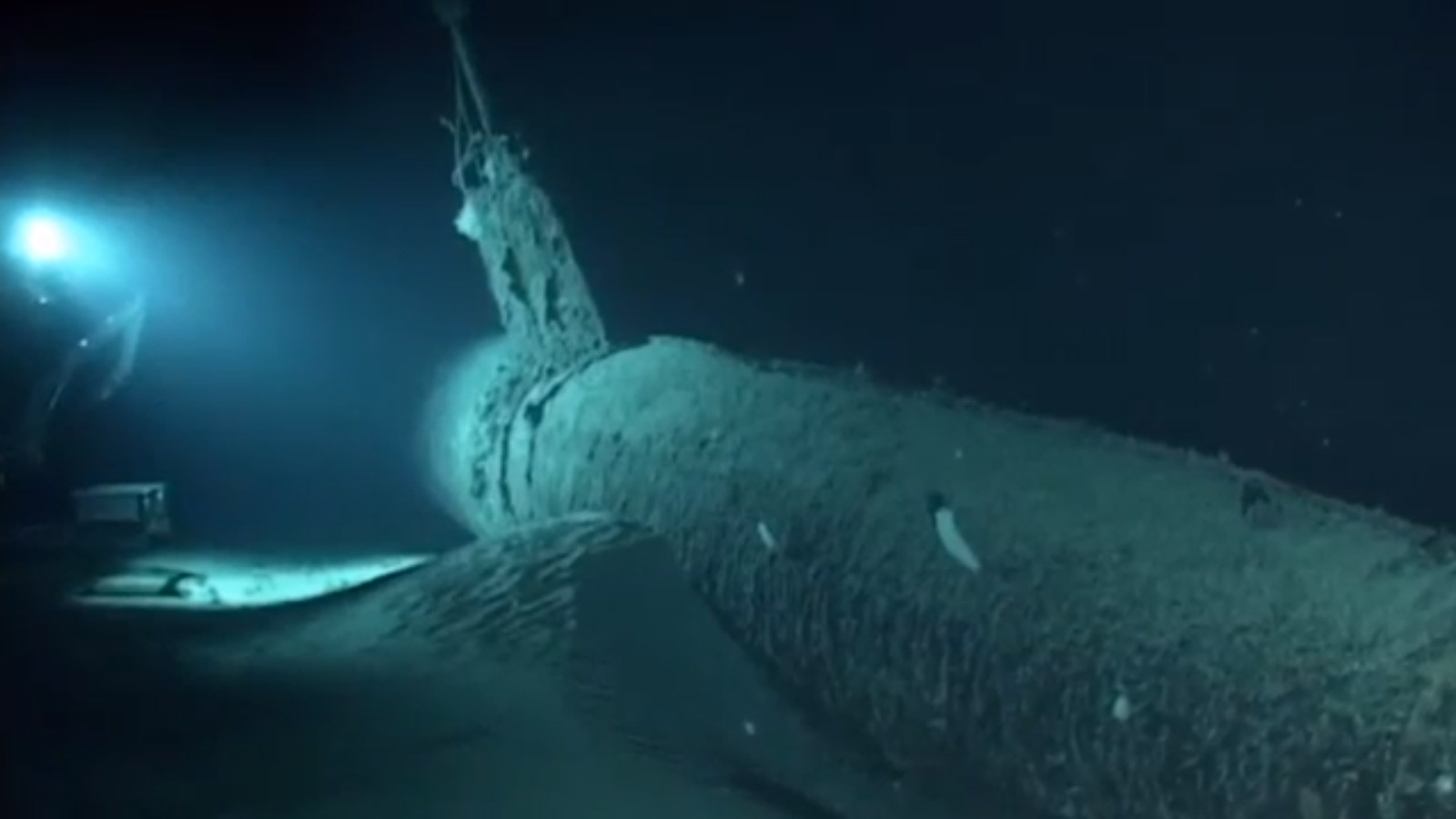 Back on dry land, the images were uploaded into PIX4Dmapper as Kelsey considered why photogrammetry is one of the best tools for examining objects from the past. “PIX4Dmapper looks at every pixel in every image. And I’ve got thousands of them here! It looks for patterns that enables it to actually stitch photographs together - you can see how the software figures out the position where each photograph was taken.” 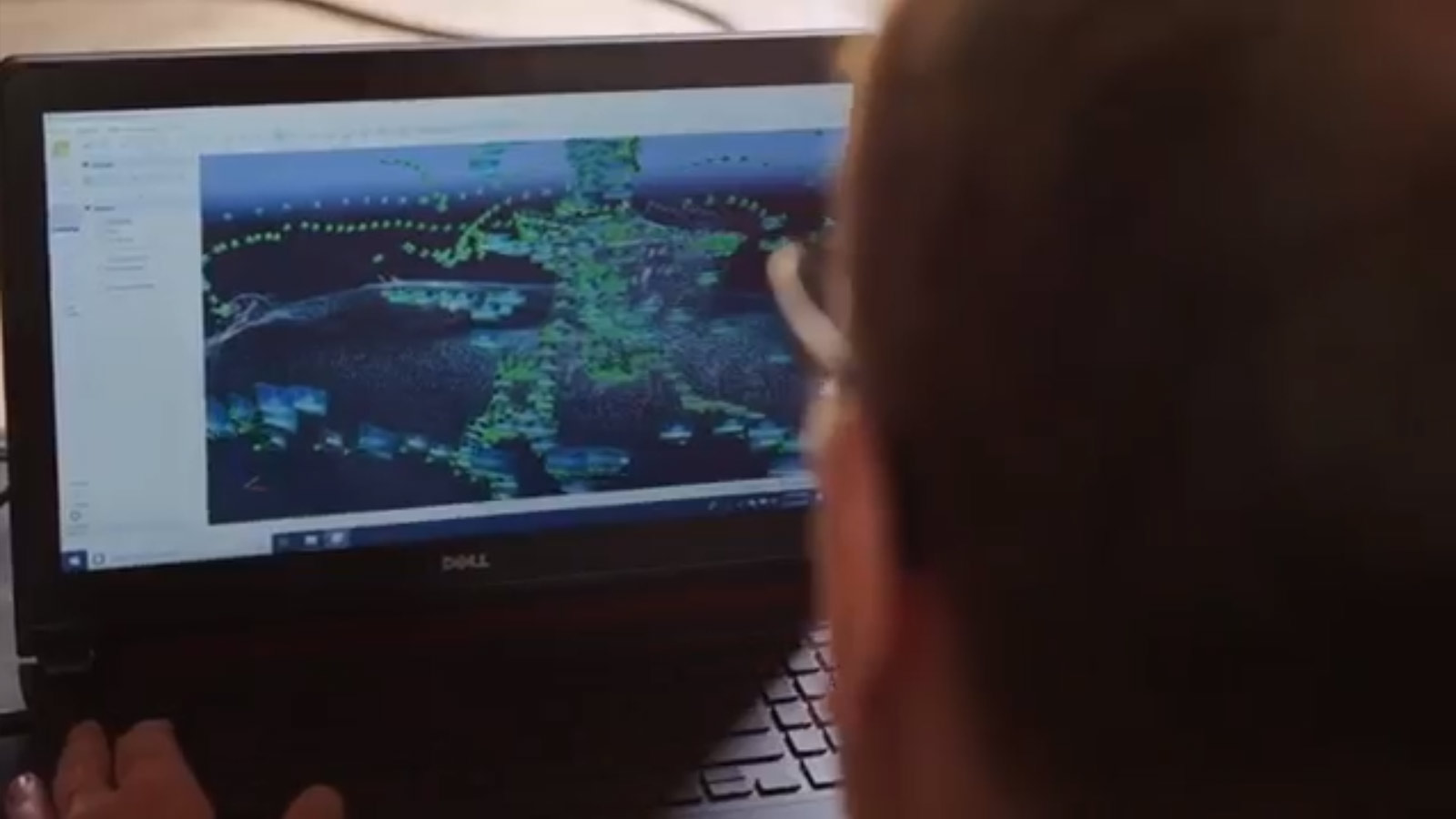 Working with the Pix4D rayCloud™, the team can see how each image is linked to the photogrammetric model

Looking at the second processing step, he continued: “You just begin to see a hint of the model that it’s going to create. And then from there - this is where it gets really, really cool. It actually creates a mesh, or a model of this mini sub. Which is just an amazing piece of history and piece of this story.”

The team examined the model closely, noting that the torpedoes had not been fired, meaning the submarine had been sunk before completing its mission: and was possibly still very dangerous. 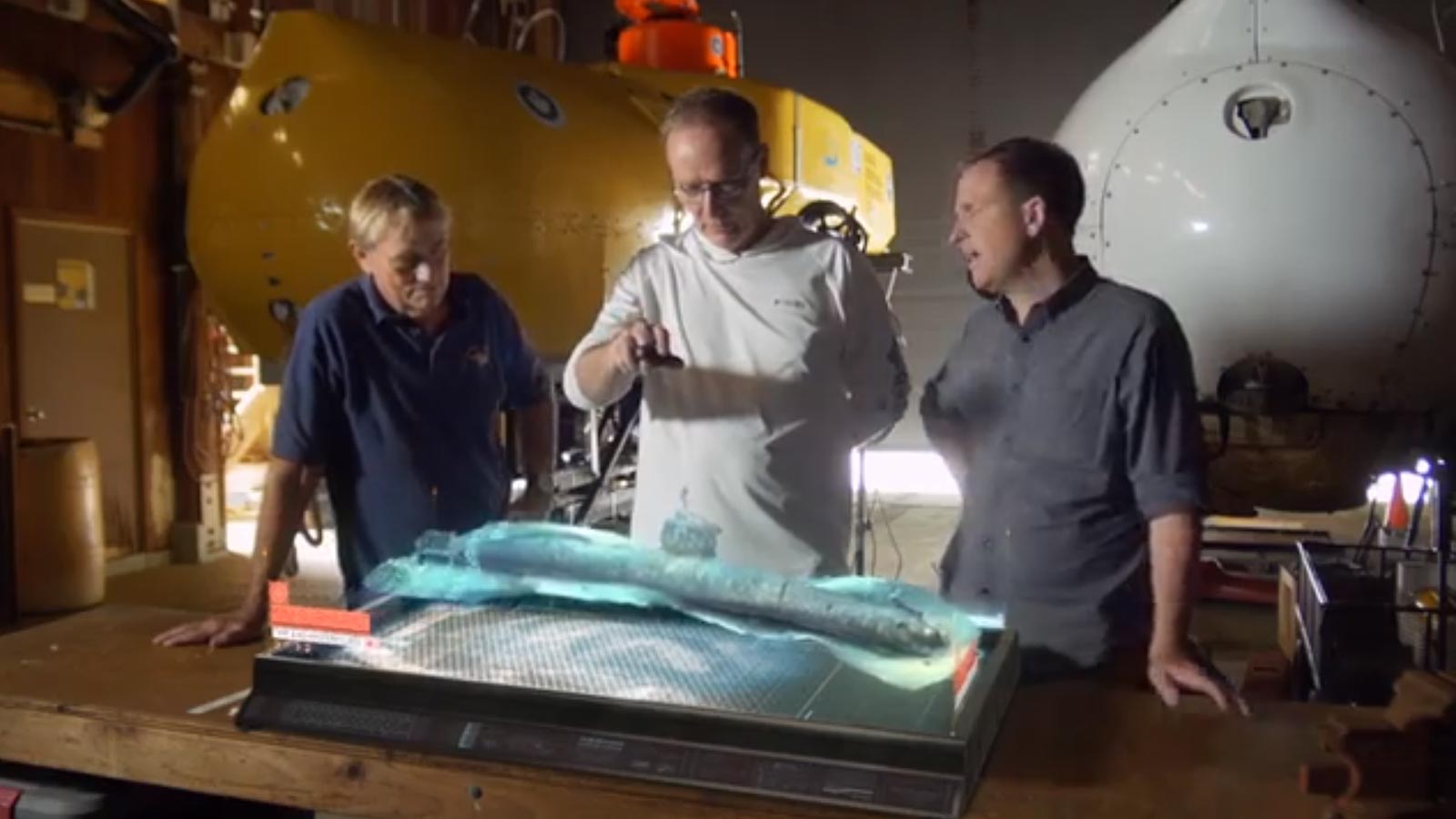 The team examined an interactive 3D model of the wreck

They spotted damage in the conning tower: a relatively small hole which had sunk the vessel. Using PIX4Dmapper’s built-in measuring tools, the team was able to confirm the hole was barely over 4 inches, and therefore was caused by a shot from the USS Ward’s 4-inch 50 calibre guns.

The shot sunk the sub before she could fire her torpedos. It was the very first shot of the Pacific War. Kelsey’s team proved that it ended the lives of two men: it can never be known how many lives that deadly bullet saved.

With an unparalleled range, Catalina seaplanes were used throughout the Pacific Theatre in the Second World War. The aircraft had massive wingspans which allowed them to fly some 2,500 miles (4,000 km) without refueling. They may have helped the American forces drive off the Japanese attack, but many were destroyed on the ground before they could take off. 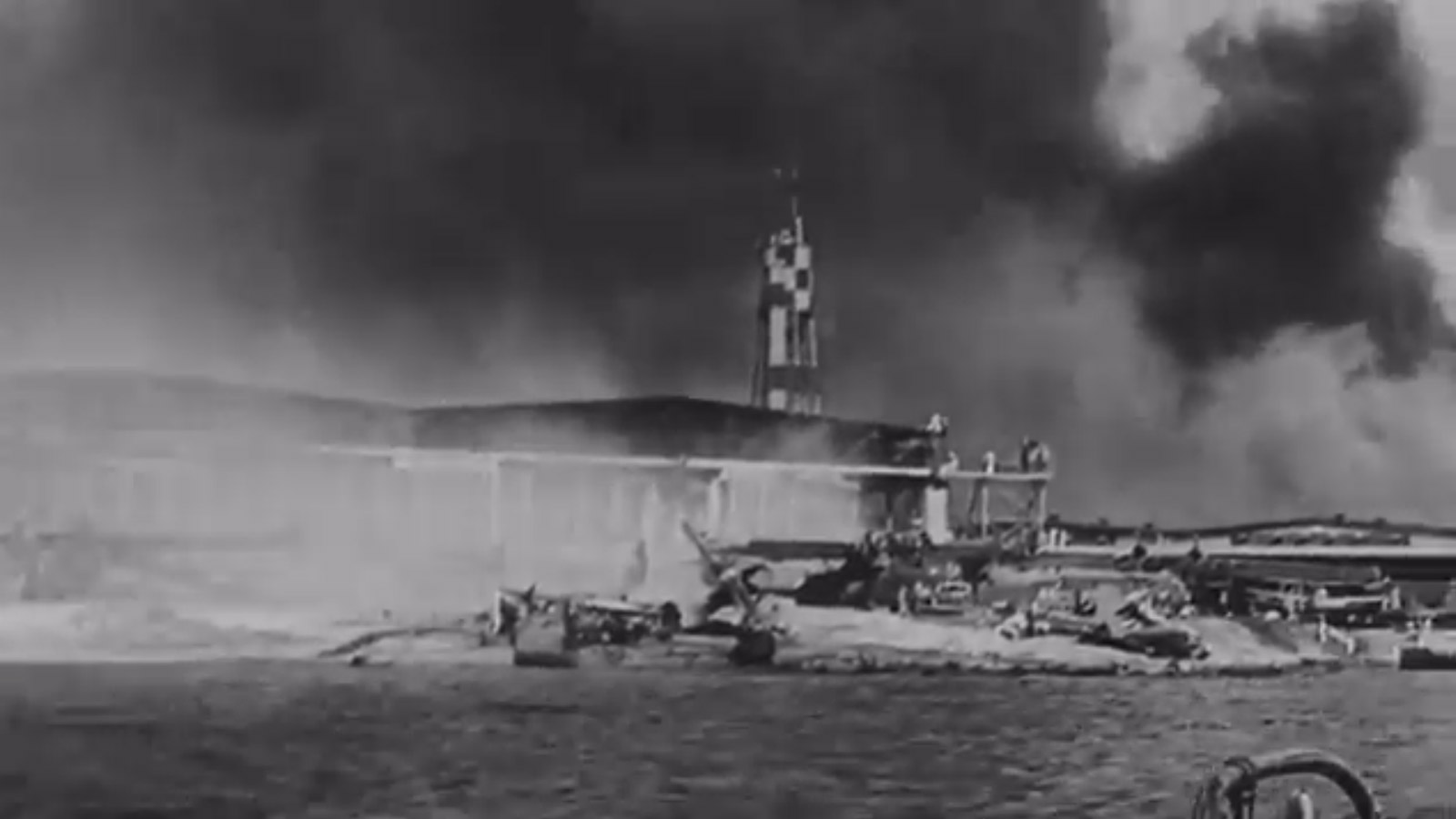 On December 7 1941, 33 Catalinas rested in or around the Kaneohe Bay Naval Air Station. In 2019, there was one beneath the waves. The team’s mission was to model it and discover whether this particular plane had been able to take off and fight back against the attack.

Kaneohe Bay is notorious for its poor visibility. As such, no one had ever seen all of the wrecked Catalina at once, instead viewing her in glimpses from behind silty goggles.

Unable to see more than five feet, the team moved slowly and carefully, to not disturb the silt which had settled over the wreck.

“This is a 3D vision of the aircraft which is impossible to have today. Nobody can see the aircraft like this as it lays on the bottom of the bay.”
They took thousands of photos, all with high overlap to ensure that the model could be reconstructed successfully. The team also placed ground control points to verify the accuracy of the structure.

After 8 hours of processing, the images created the first ever 3D model of the Catalina wreck.

The model clearly shows one wing and the plane’s fuselage.

Dr. Hans Van Tilburg of the National Oceanic and Atmospheric Administration commented: “This is a 3D vision of the aircraft which is impossible to have today. Nobody can see the aircraft like this as it lays on the bottom of the bay.” 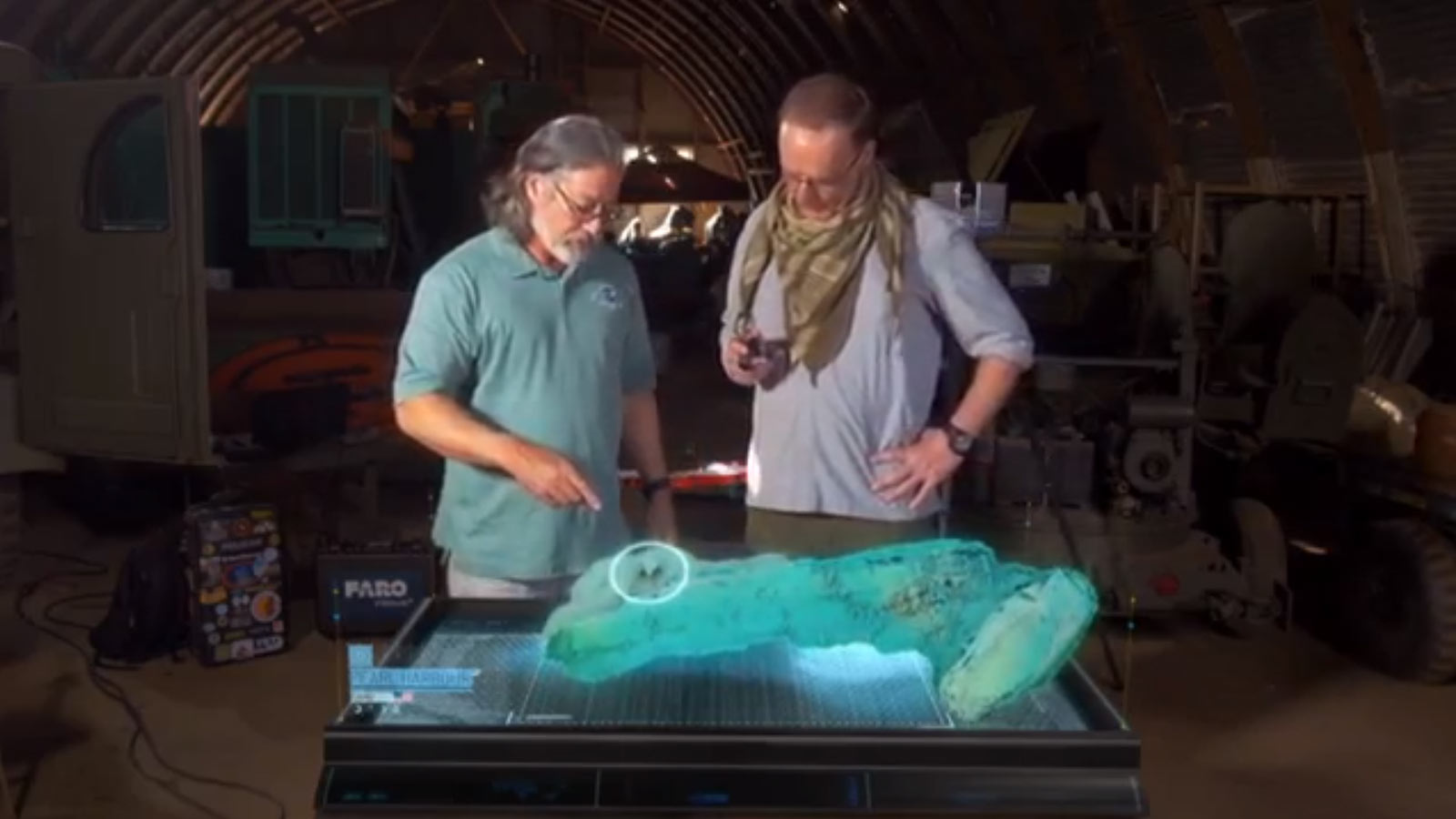 Examining the sunken remains of a seaplane

Looking carefully at the details of the 3D model, Dr Van Tilburg was able to see that the seaplane had sunk on the bay, not in the air, yet her motor had been switched on. The Catalina and her crew had gone to the bottom in a futile attempt to drive off the deadly attack.

The right tools to map the past

Although the attacks on Pearl Harbor were carried out 78 years ago, Oahu still carries the scars of that day.

These marks are in many different locations, and Kelsey had the technology to use the right tools to reconstruct them in different ways.

Inside a mapping toolbox

Marine Corps Base Hawaii is still used by the military. Kelsey found evidence of a filled-in bomb crater, which he was able to map from images taken by a DSLR camera. 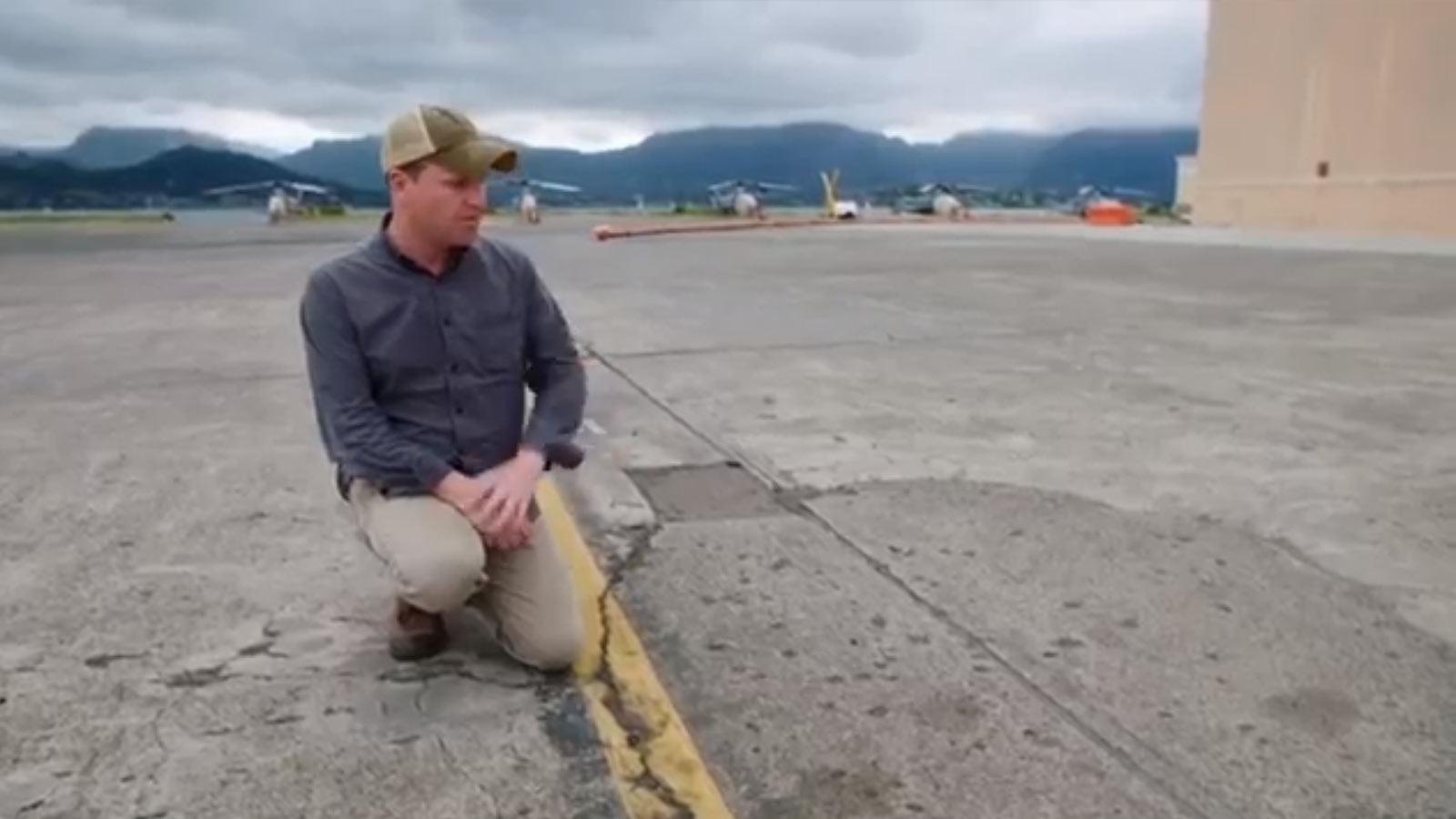 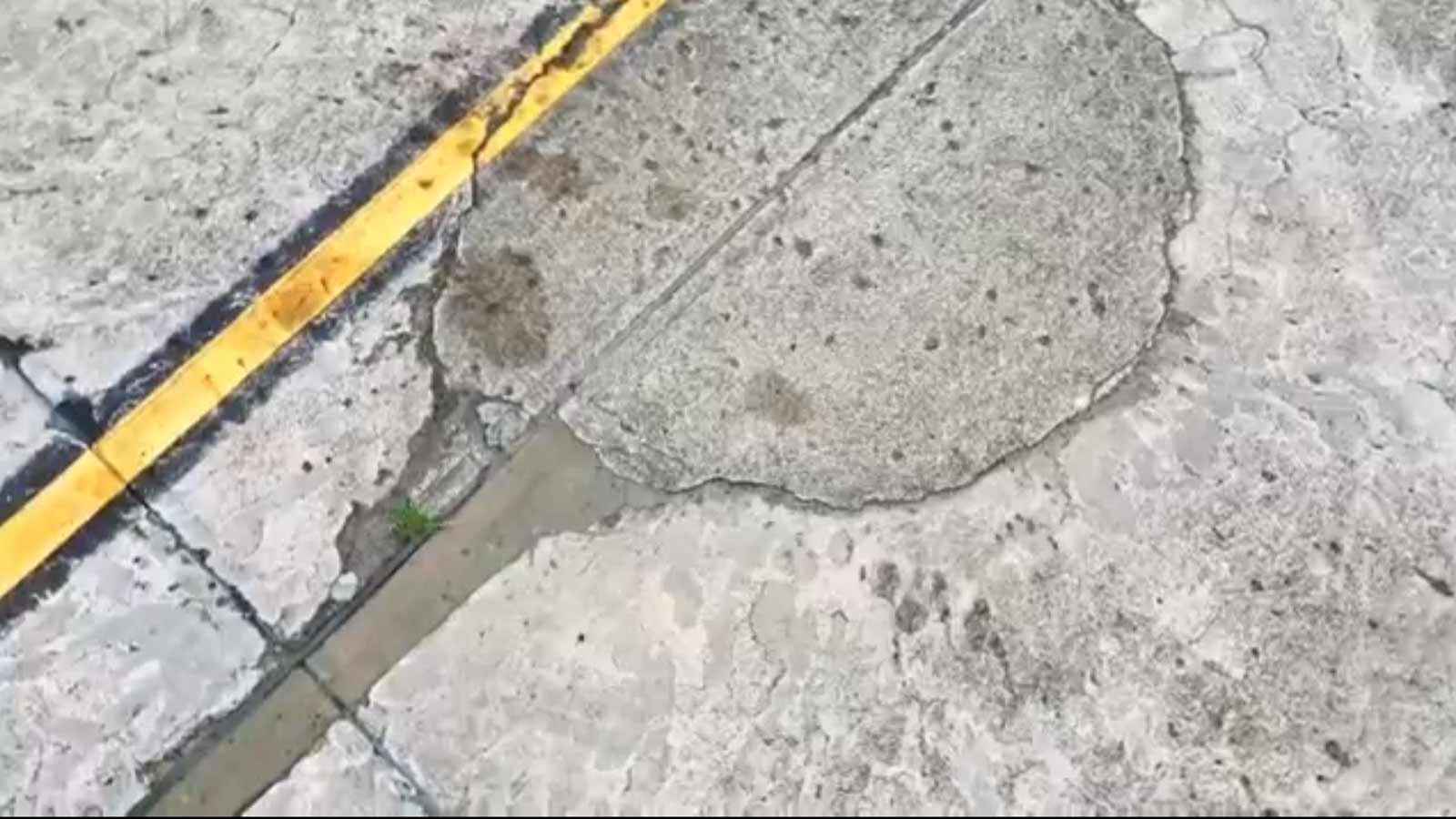 Examining the remains of a bomb crater

Moving indoors, Kelsey investigated damage to the hanger where some Catalinas were stored on that deadly morning.

“Interesting angles in here, but really no problem for the scanner because the laser goes out in all directions… a laser scanner loves interiors,” he commented. Using LiDAR, he mapped a narrow stairwell, discovering bullet holes in the metal staircase. “That sends a chill up your spine. Even indoors you’re not safe. Even in this concrete stairwell, bullets were flying,” he says. 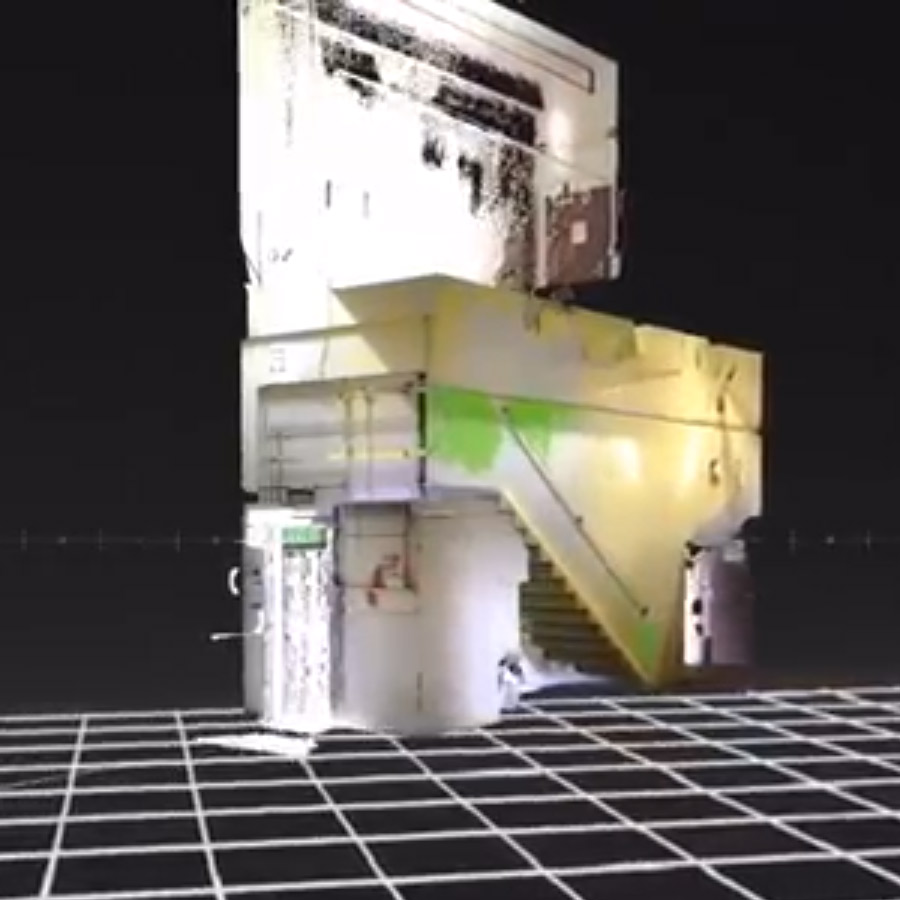 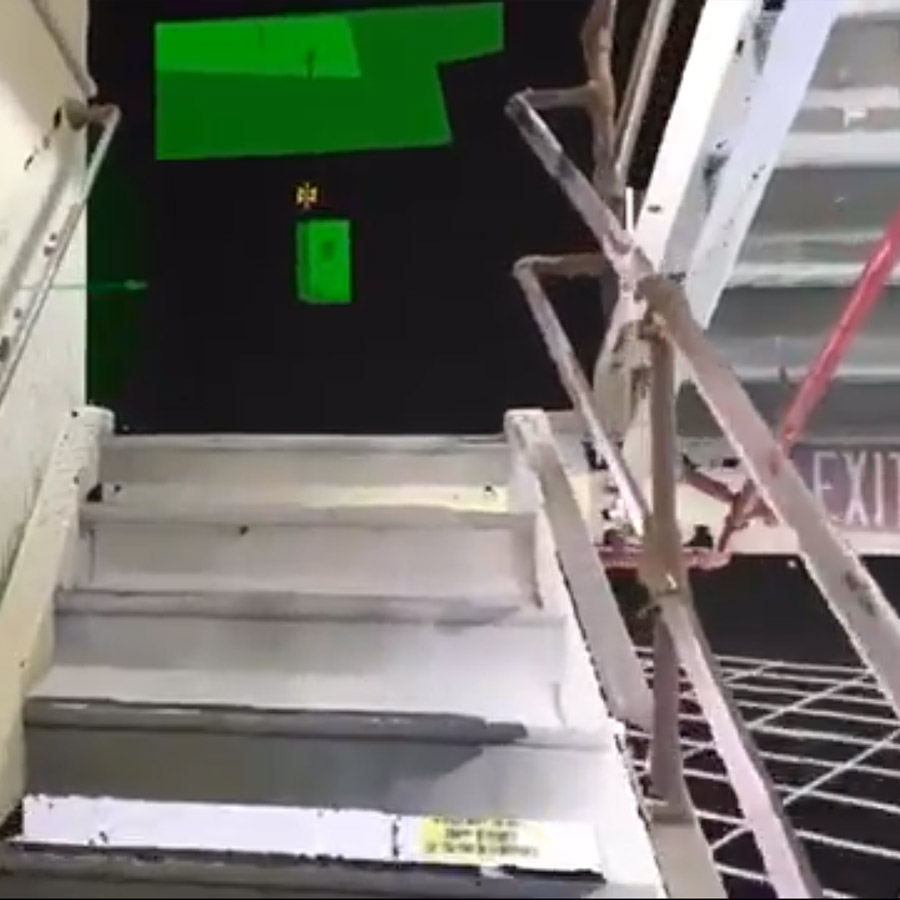 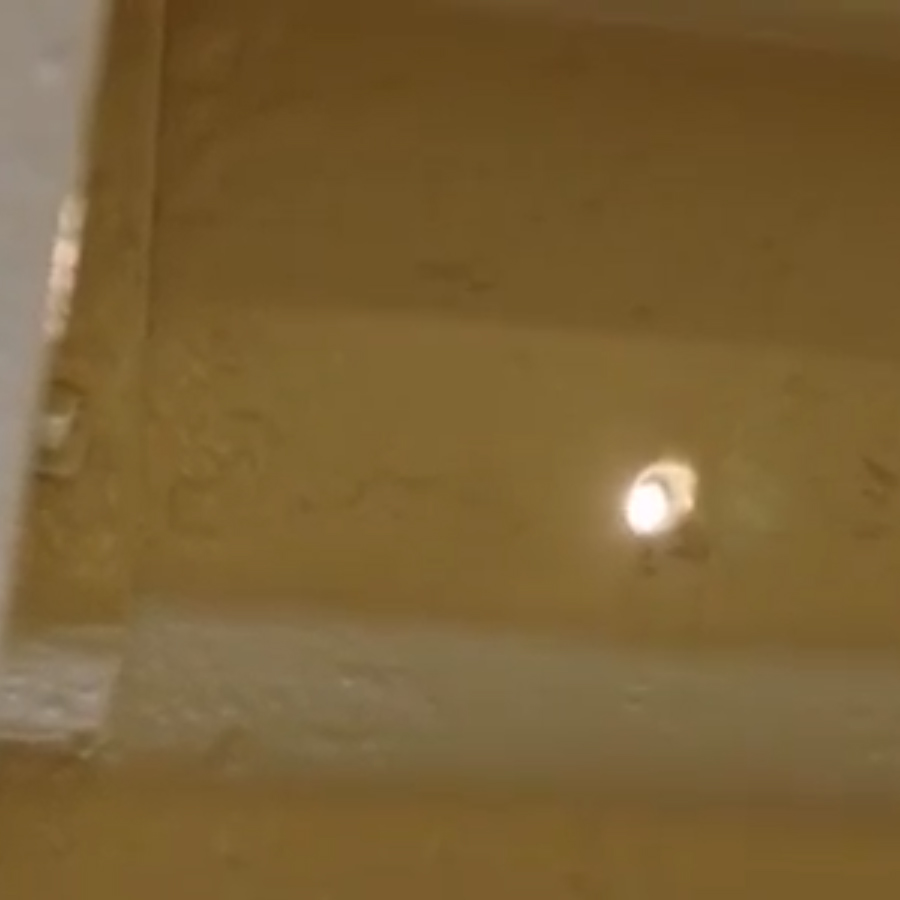 The LiDAR reconstruction of the metal stairwell, and a bullet hole from the Second World War

Marine Corps Air Station Ewa is just 11 miles from Pearl Harbor and was hit hard in the attack. It was closed in 1952, but the tarmak remains, the space is still clearly an airbase. 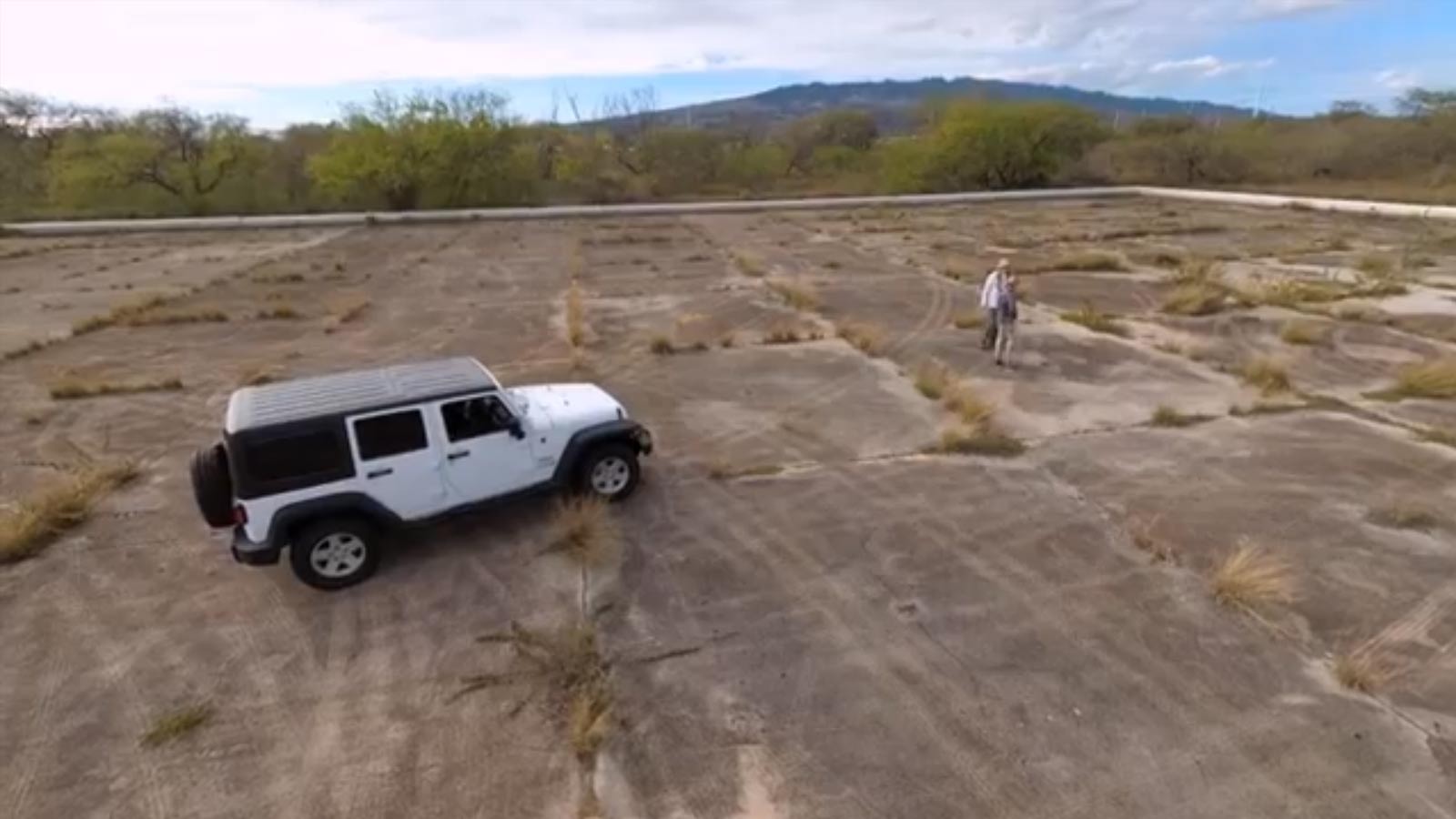 A Second World War airbase: as it was then and is now

Using a fixed wing VTOL drone, Kelsey scanned the large concrete area of an old airbase. He explained that what was true for the Catalina in the Second World War remains true today: generally speaking, the larger the wingspan, the longer the flight time. When mapping a large area, it makes sense to choose a fixed wing drone.

The multispectral camera captured information invisible to the human eye as the drone flew its pre-plotted path autonomously.

Kelsey and Morgan spotted an unusual looking area on the completed orthomosaic. The tarmac was scarred from high heat, leaving the ghostly traces of a burned aircraft. “You would otherwise just walk right over it and not notice it, but this is basically the footprint of a burned aircraft,” says Morgan. 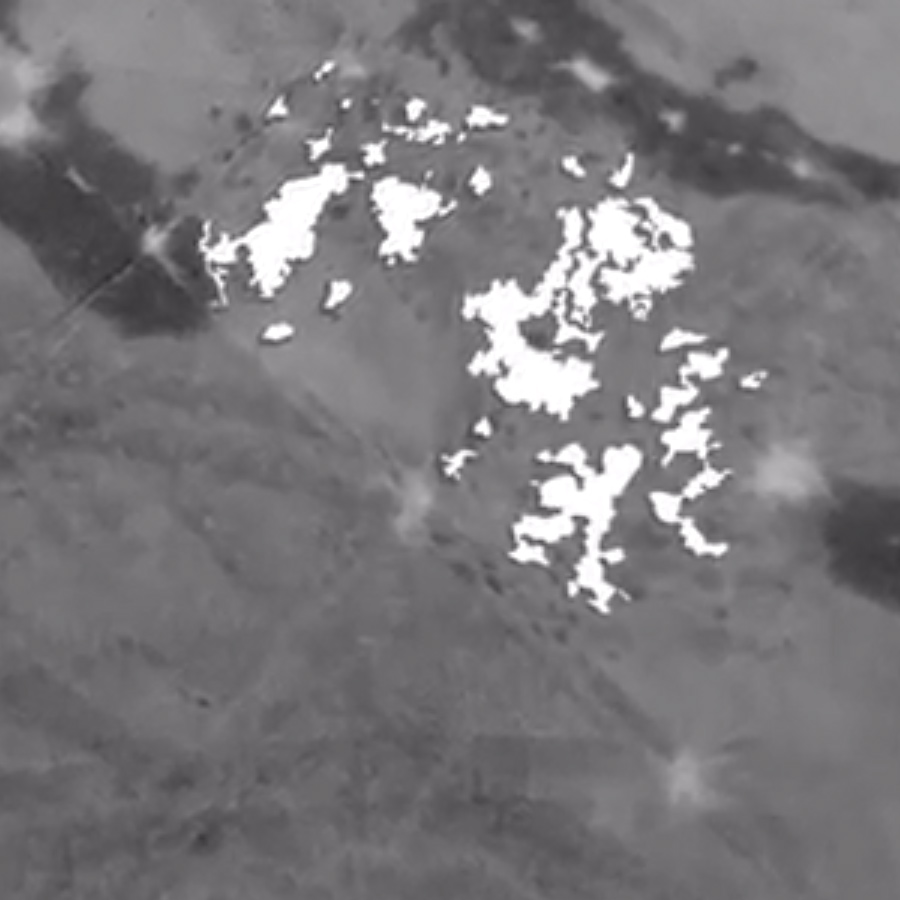 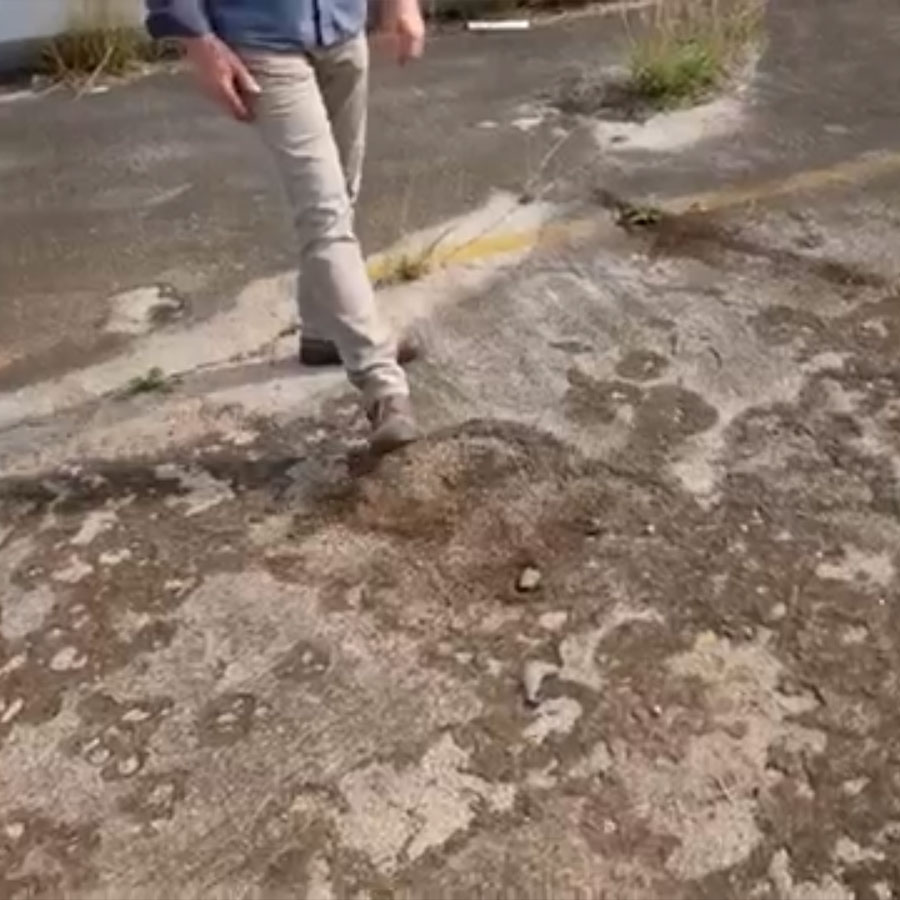 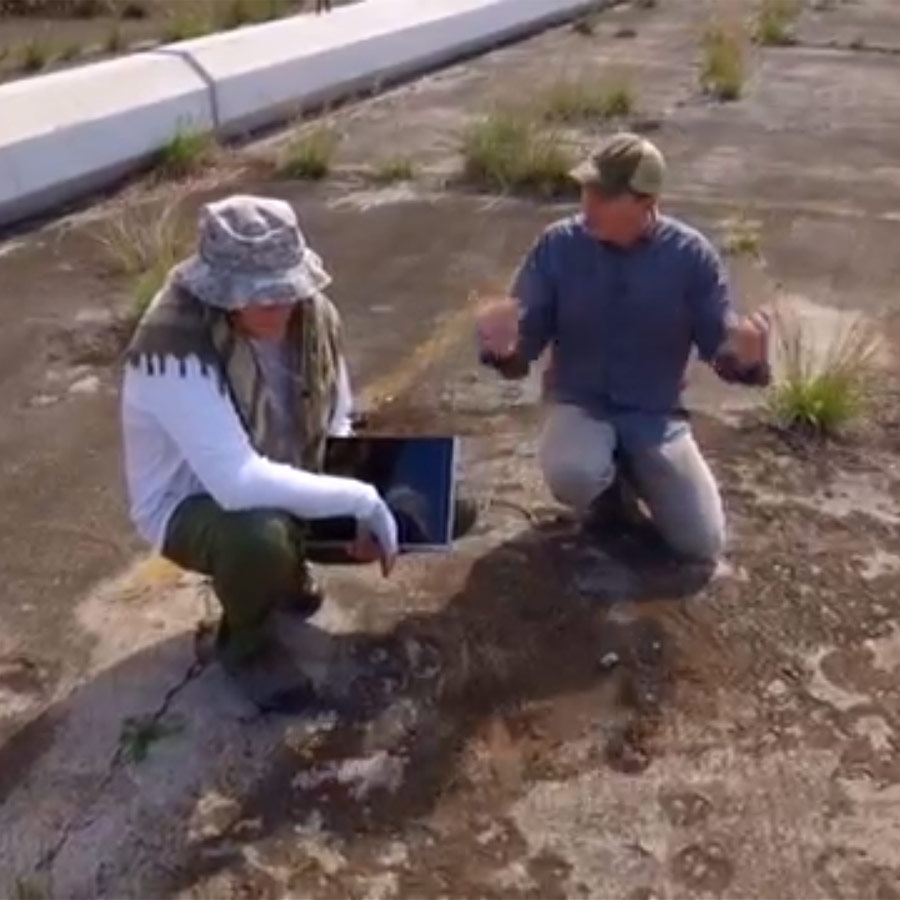 The burned area showed up clearly in thermal imagery, allowing the team to literally walk over history

The final tool the team used was a little bit of Hollywood magic, projecting the 3D models created in PIX4Dmapper as holograms on a table. Kelsey was able to interact with the models, turning, panning and zooming with a handheld remote control, bringing history to life for the guest experts, team members and audience alike.

The last chance to model history

Commenting on the USS Arizona, Kelsey said: “How can you not be amazed by something like this?” The National Geographic series is a chance for Kelsey and the team to create: “Not only beautiful models, but valuable models. Important models,” before the last remaining traces of the Second World War disappear forever.