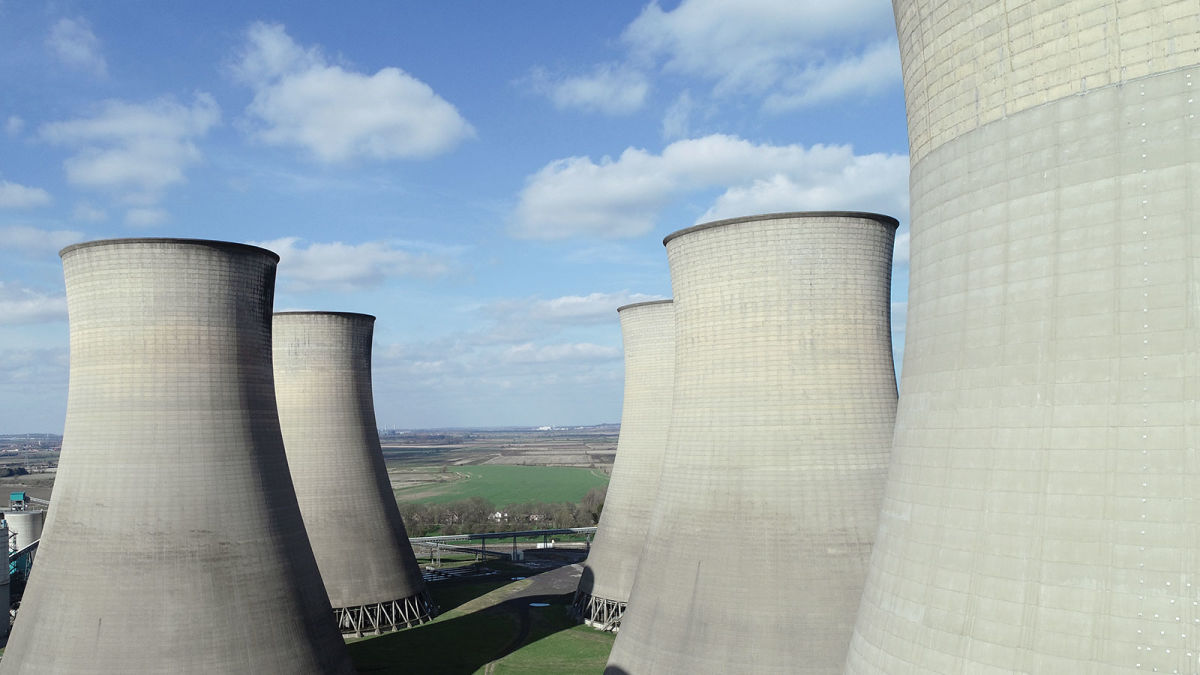 Out of power: mapping a disused coal plant for new life

February 2, 2021
Coal is being left behind, resulting in closed power plants. Redeveloping them requires planning - but data collection can be tricky.

As many countries transition away from fossil fuels, coal power stations are being decommissioned across the globe. These coal power plant closures leave huge infrastructures behind, including tall chimneys and cooling towers. Eventually, the land they sit on may be repurposed as the space can be used to find a more attractive and functional alternatives to empty coal power plants. This can lead to interesting but complicated controlled demolition projects to bring down the towers. Mapping a disused coal power station is a first step in the redevelopment process, but it might not be a simple task, as H&W Surveying and Consulting discovered.

H&W Surveying and Consulting is a company whose core services are in building and quantity surveying. They also assist with insurance claim assessment for fires and floods amongst other events. Their repertoire of projects currently includes mapping sea walls, harbors and complex roofs to generate dense point clouds. Keith Wakeley, who kindly shared this project, is a veteran of Pix4D software, benefiting from the extensive support available online as well as the community forum which have helped him develop his expertise. This meant he was well-equipped to work with PIX4Dmatic on this project. 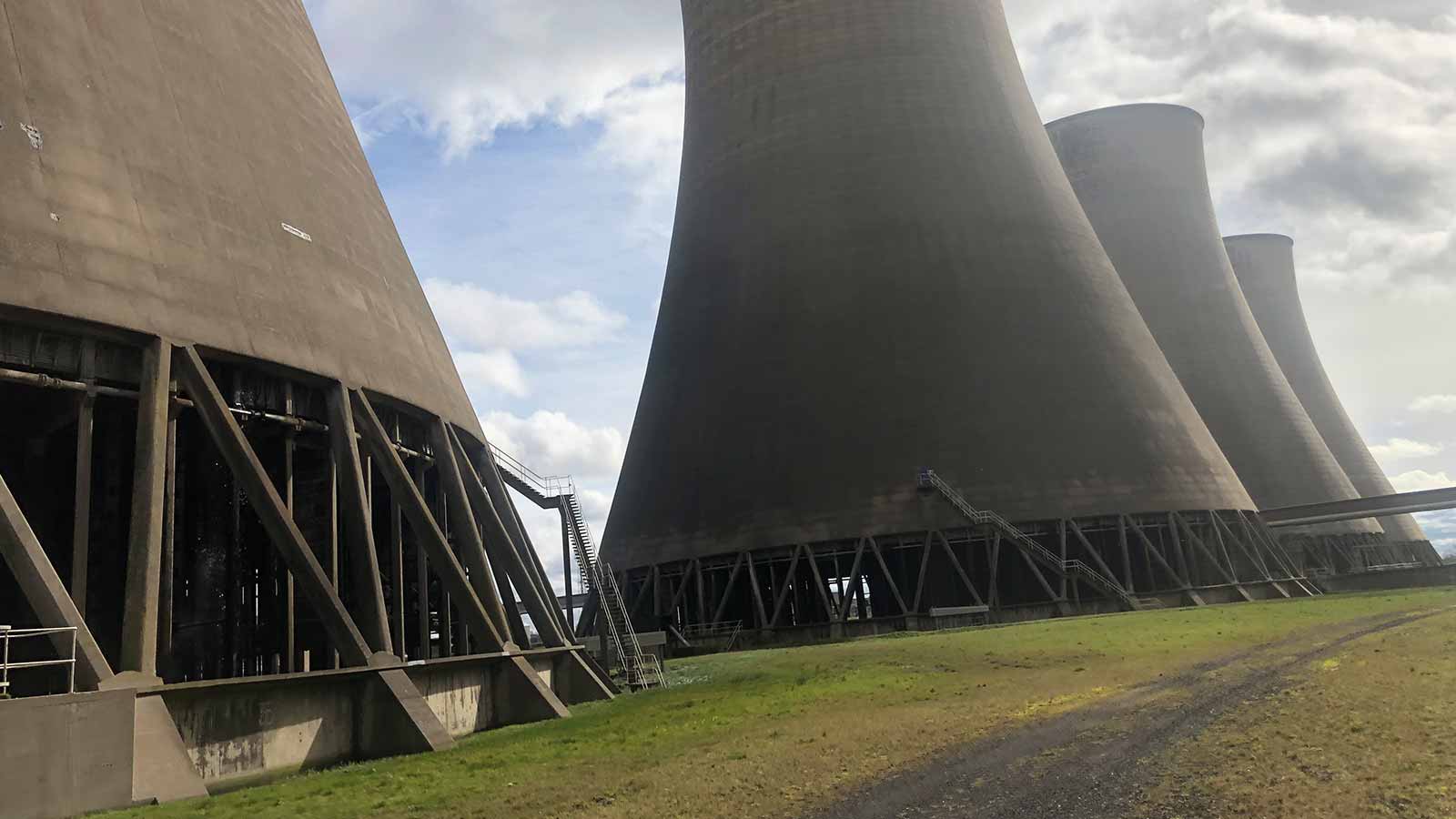 For this shut down coal power plant, H&W Surveying and Consulting were principally interested in assessing an ash stockpile on the eastern side of the site, as well as creating a point cloud of the rest of the coal station. The location of this power plant is on the flood plain of the River Trent, making it vulnerable to flooding. H&W Surveying and Consulting’s client hoped to use the ash stockpile to help fill in trenches in the land and protect the terrain beneath the power plant from the river flooding. However, this would not be possible if the stockpile had been static for too long and filled with organic matter. Whilst H&W Surveying gathered aerial data, geotechnical specialists sampled bore holes to assess the ash pile to determine if it could be moved, and completed an ecological survey.

A difficult site to survey

There are strict regulations for flying drones in the UK to maintain air traffic safety. H&W Surveying and Consulting got permission for their flight from the relevant authorities, but were faced with a problem: they were allowed to fly at 120 meters (394 feet), as per UK restrictions, but the cooling towers on site were 115 meters (377 feet) tall and the main chimney was 220 meters (721 feet) tall. Wakeley’s team flew around these in an orbital manner up to the legal height restrictions. For this reason, the use of a rotary drone with maneuverability options around the tower was ideal. Grid missions were then flown in chunks between the cooling towers at a height of 75 meters (246 feet) to collect data. 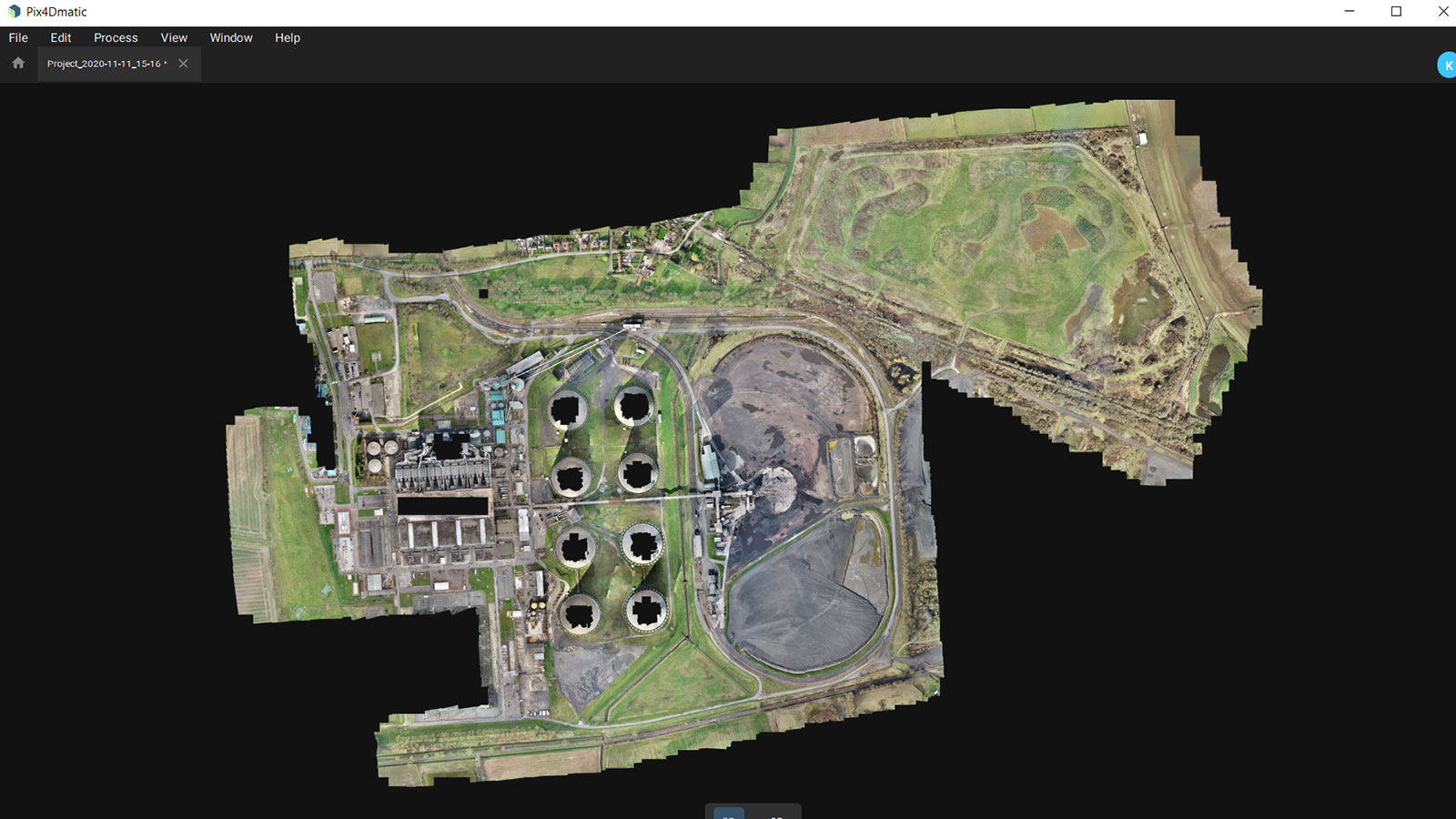 The vertical size of the site was not the only obstacle to the project. Spread across 171 hectares (423 acres), Wakeley had to spend the first day on site setting up the Ground Control Points (GCPs), which are important for improving the accuracy of the data for processing. Wakeley marked 80 GCPs across the site, using his expertise to determine their best locations. He then split the project into 16 flights. The large number of flights necessary because of the obstructions around the site, ranging from buildings and infrastructure to the tall cooling towers. Planning a drone inspection flight properly can save time during data collection. In the end, each flight collected up to 500 images, generating a large total dataset of 4,004 images.

The ash stockpile was also an issue: the land could be unstable, or too solid for the client’s plans. It is vulnerable to flooding by the nearby river, and spreading out the contents of the stockpile could mitigate the site's vulnerability for future development. Careful management of these stockpiles is meant to prevent too much organic build up, which can prevent construction plans - if a stockpile houses lots of animal burrows and habitats, there are stricter rules about transporting it or using the matter. This is why the volume assessment produced by H&W Surveying and Consulting needed to be combined with the bore hole and ecology survey data, to give a complete picture of the ash stockpile’s state. Wakeley had to coordinate with the other teams on site to have a clear view of the ash pile when he was flying over it. 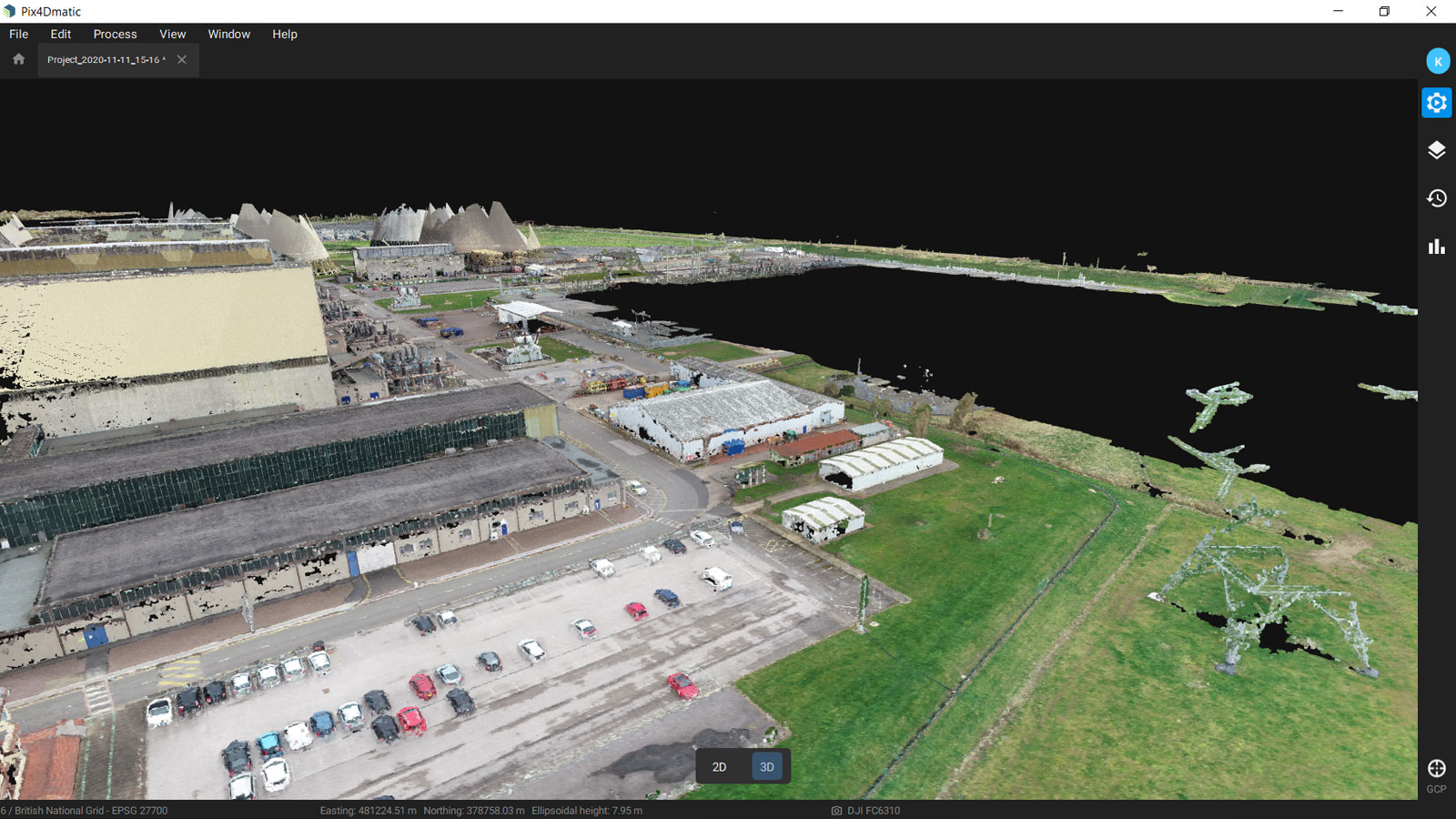 Wakeley loaded the images onto PIX4Dmatic on his dekstop computer, and marked 80 GCPs before running Step 1 of processing.

The total processing time shrank from over 32 hours down to just 14 hours.

PIX4Dmatic’s workflow was also simple and seamless. Wakeley found it quick to pick up, with an intuitive set up that suited his style of work. In addition, the GCP picker helped speed up his work whilst the processing options were ideal for his project. 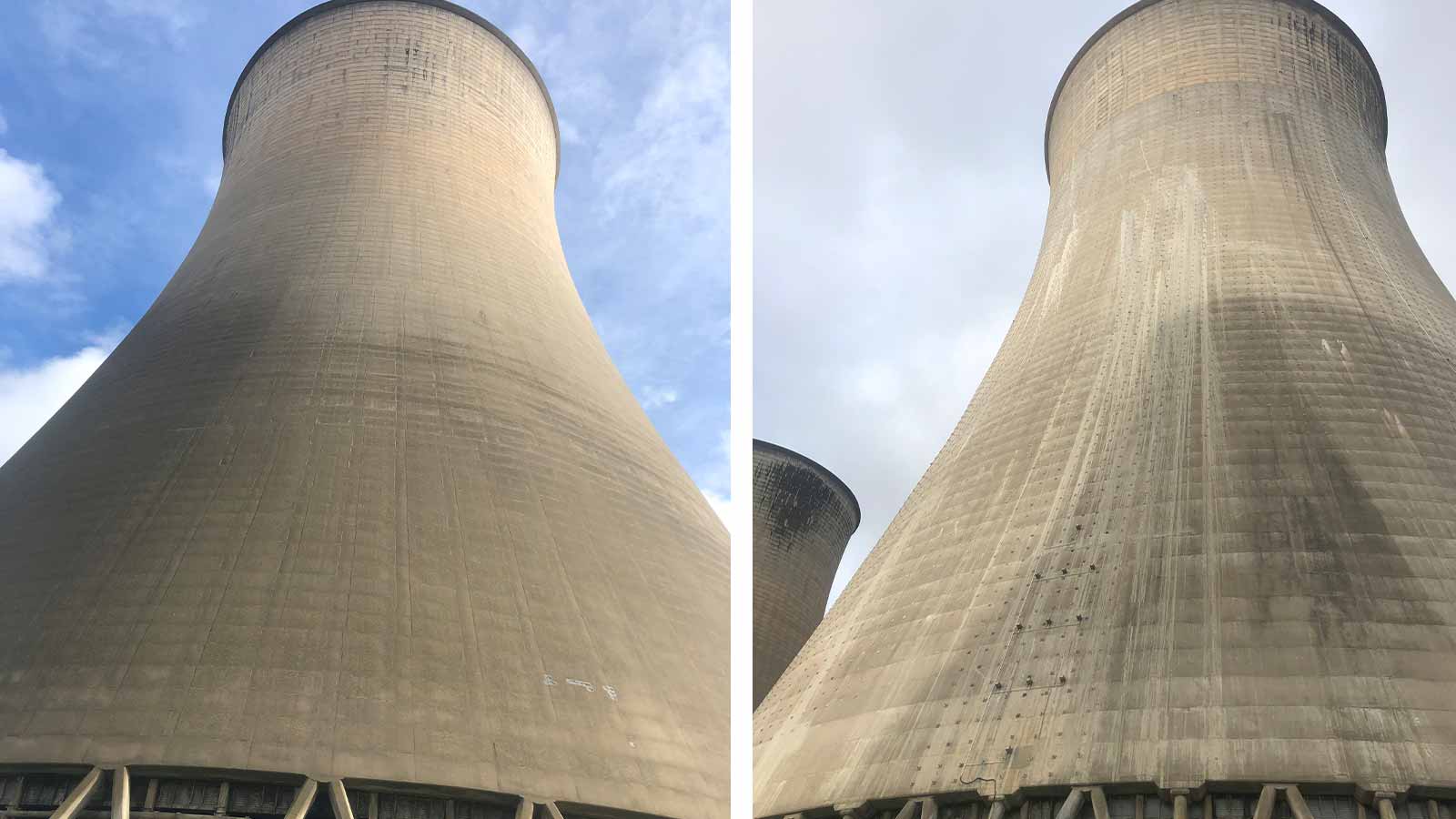 Soon these curved concrete towers will be safely brought down

Looking to the future

The final output was a dense point cloud used alongside cross sections from the terrestrial surveying and boreholes, and cross-referenced with grid lines across the site. The client could then plan the next stages of the redevelopment project, paving the way for the disused power station to be put to better use.

“Pix4D software is reliable, and the quality report is better than alternative options. Accuracy is key and I want something with viable accuracy that I can trust.” - Keith Wakeley, H&W Surveying

Similarly, Wakeley found that using PIX4Dmatic was a new experience opening up new avenues for larger projects. This large dataset didn’t need to be broken down into small, manageable chunks and instead crunched all 4,004 images without issue. For a surveying company with the range of projects that H&W Surveying faces, PIX4Dmatic is an exciting addition to their photogrammetry toolkit unlocking new possibilities to help contribute to a positive trend in society - the move away from fossil fuels to greener alternatives, freeing up huge infrastructures to be repurposed as part of a better future.