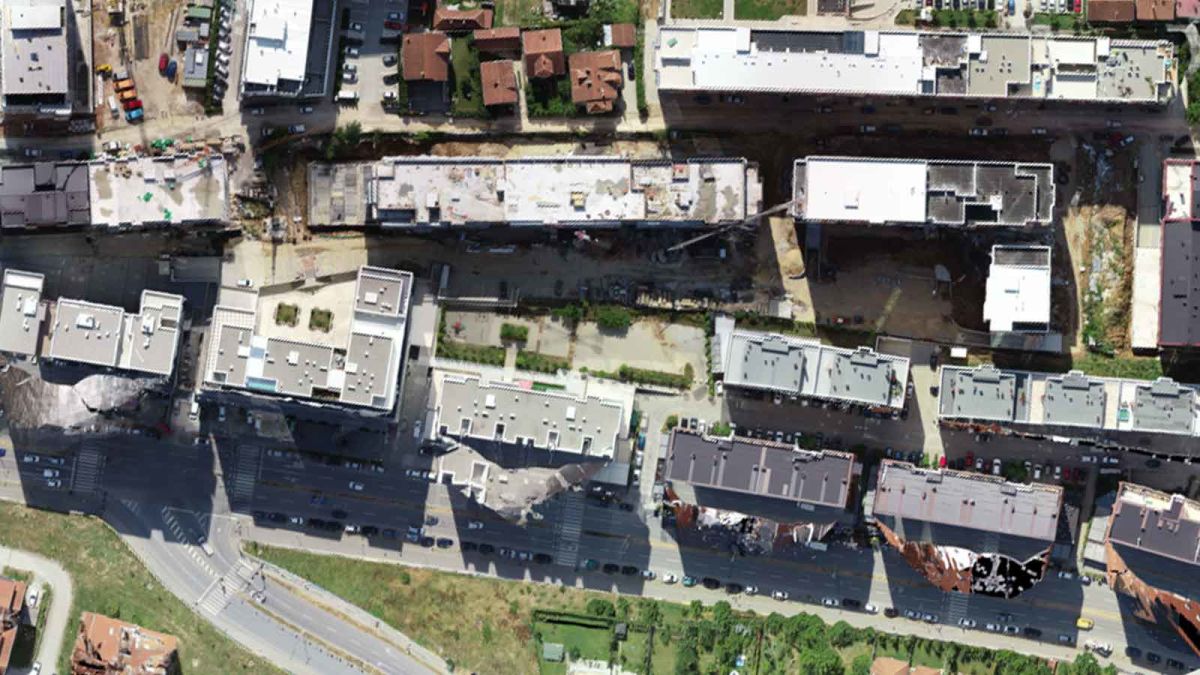 Drones in cities: the future of urban air mobility

September 4, 2019
Before air mobility has the chance to resolve gridlock, urban air flow needs to be better understood.

Ever looked up from a crowded city block and wished you could be above it all?

Air mobility has the potential to release the gridlock strangling the streets - but before we can take to the skies above the city, there are some problems which need to be solved.

The problem with using drones for deliveries

The 20th century dream of flying cars has never seemed closer. Drones are being used on farms and construction sites around the world for mapping and monitoring; they deliver essential medicine in far-flung parts of the world, and in leafy suburbs pilot programs are delivering groceries by drone.

As terrain, cities are different than suburbs, mountains, fields or construction sites. Consequently, before we see drones being flown in big cities, some real challenges need to be overcome

As an example, urban wind tunnels (or ‘street canyons’) increase wind speed and turbulence. At the city street level, residents may also notice higher temperatures from the urban heat island effect. As a result, drone pilots may feel the Venturi effect, as the breeze is funneled into the relatively narrow gap between buildings, increasing wind speed dramatically, or thermals from increased surface temperatures. 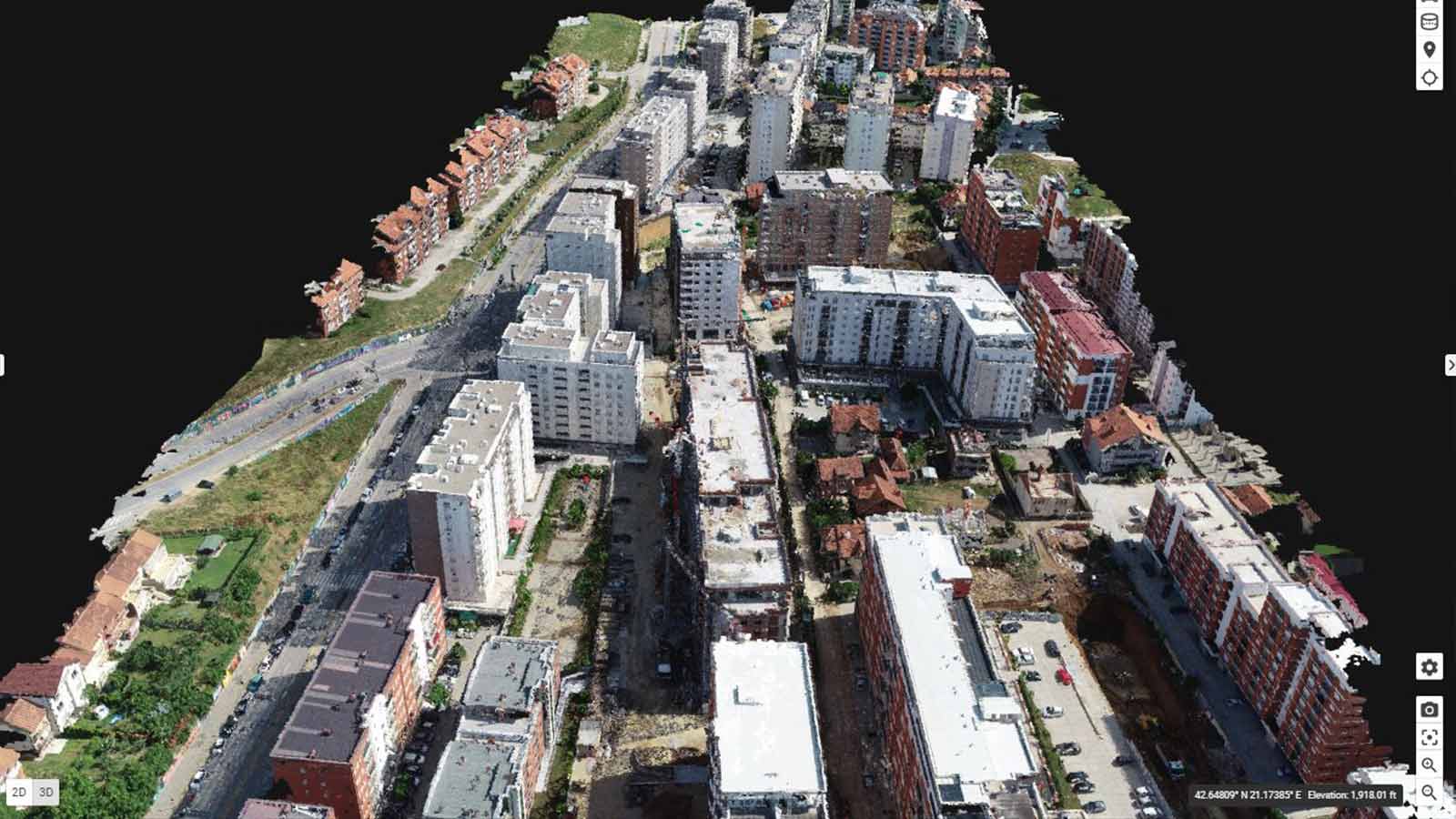 Because of the sheer density of population, there is little room for error in urban operations. Any drone program in a city needs to be absolutely safe.

Why drones are the future of urban air mobility

Most plans for urban air mobility envision propellered vehicles, holding between one and eight passengers. In artist’s renditions, these can look a lot like helicopters. Peter Wambolt, UAS Project Manager at Embry-Riddle Aeronautical University explains how helicopters differ from drones:

The future of urban air mobility envisions a vehicle which combines the agility of a helicopter with the safety of an airplane at much lower noise levels. At least 50 cities worldwide are incorporating urban mobility drones into their long-term plans. Passenger drones will be trialed in Dallas, Texas as early as 2023: it’s possible we’ll see them in our skies not long after that.

Study abroad with a difference

To study the effects of urban landscapes on drones, a team from Embry-Riddle Aeronautical University and Gaetz Aerospace Institute took off to Kosovo. The research effort was directed by Dr. Kevin Adkins and hosted by the Rochester Institute of Technology at the American University Kosovo. 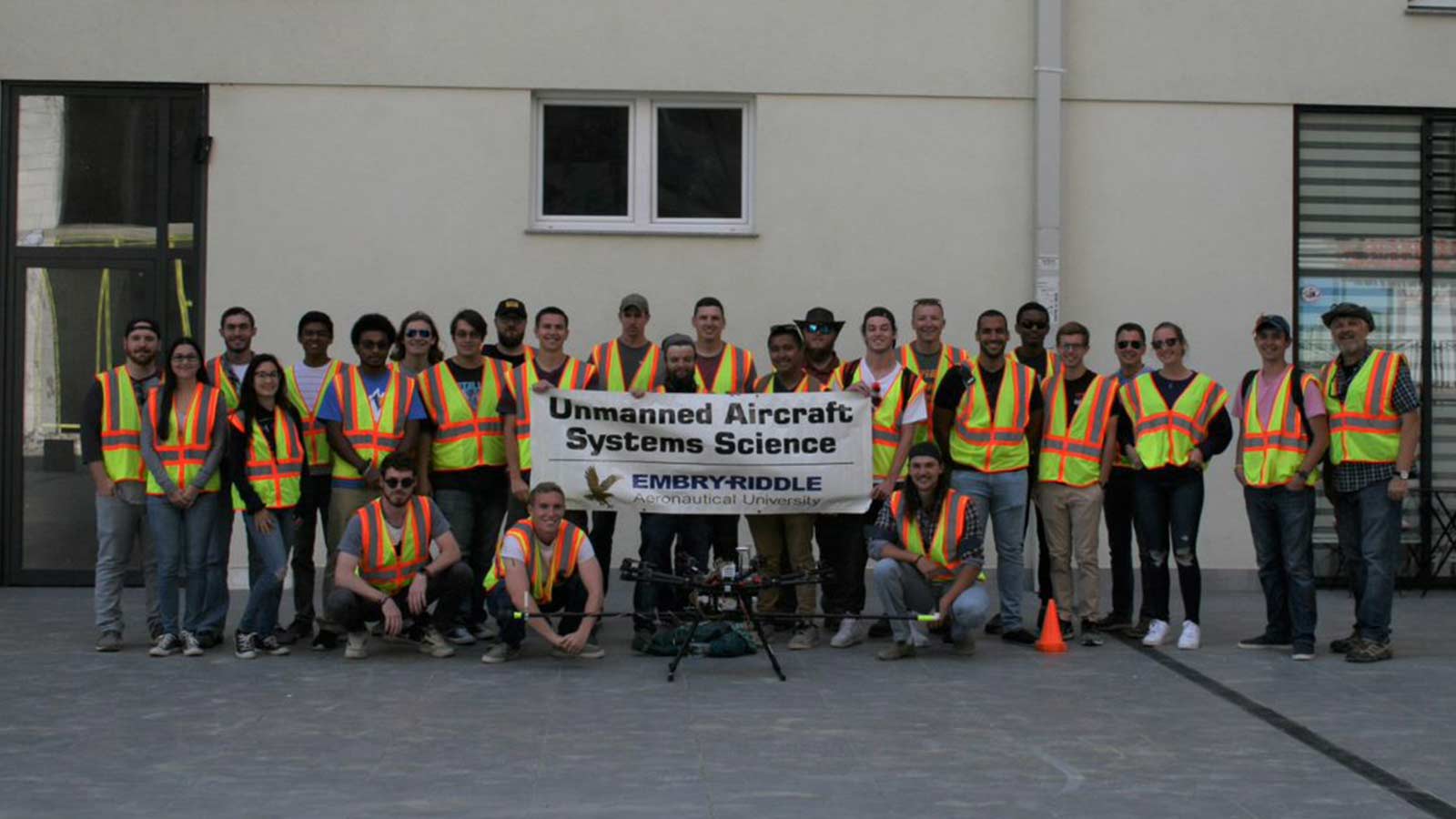 Peter Wambolt, UAS Project Manager at Embry-Riddle Aeronautical University, explained it would be extremely difficult to get permission to fly in a similar built-up, densely populated area in the United States. Many of Kosovo’s urban environments are relatively sparsely populated following the war in the late 1990s. Still, “One of the harder parts of the project was getting permission from the government to allow us to fly in Kosovo,” says Wambolt. “However, with the tireless work of Dr. Dan Macchiarella and cooperation from the government, we did get permission and were able to work effectively.”

The resulting project is one of the first of its kind, and will pave the way for the future of urban air mobility.

Hardware for a hard problem

The team used a variety of drones for different situations. Wambolt recalls that getting the equipment to Kosovo from the US was one of the trickier challenges of the project! 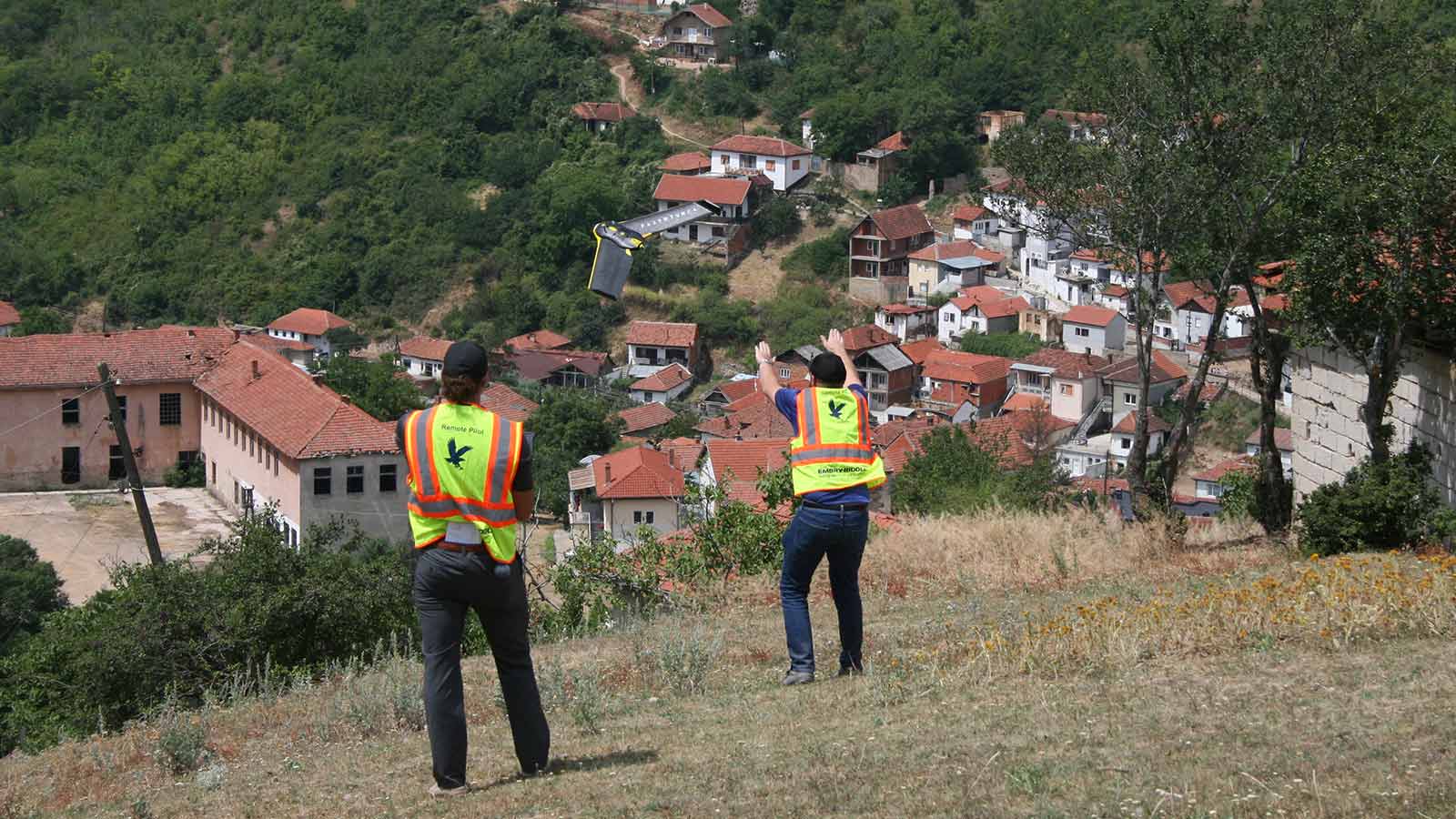 Christopher Swinford, a senior undergraduate studying Engineering Physics at Embry-Riddle, mounted two sonic anemometers on the DJI S1000, to measure both horizontal and vertical wind fluctuations. The octocopter drone is particularly stable, so it provided a solid foundation for hosting the sensors. 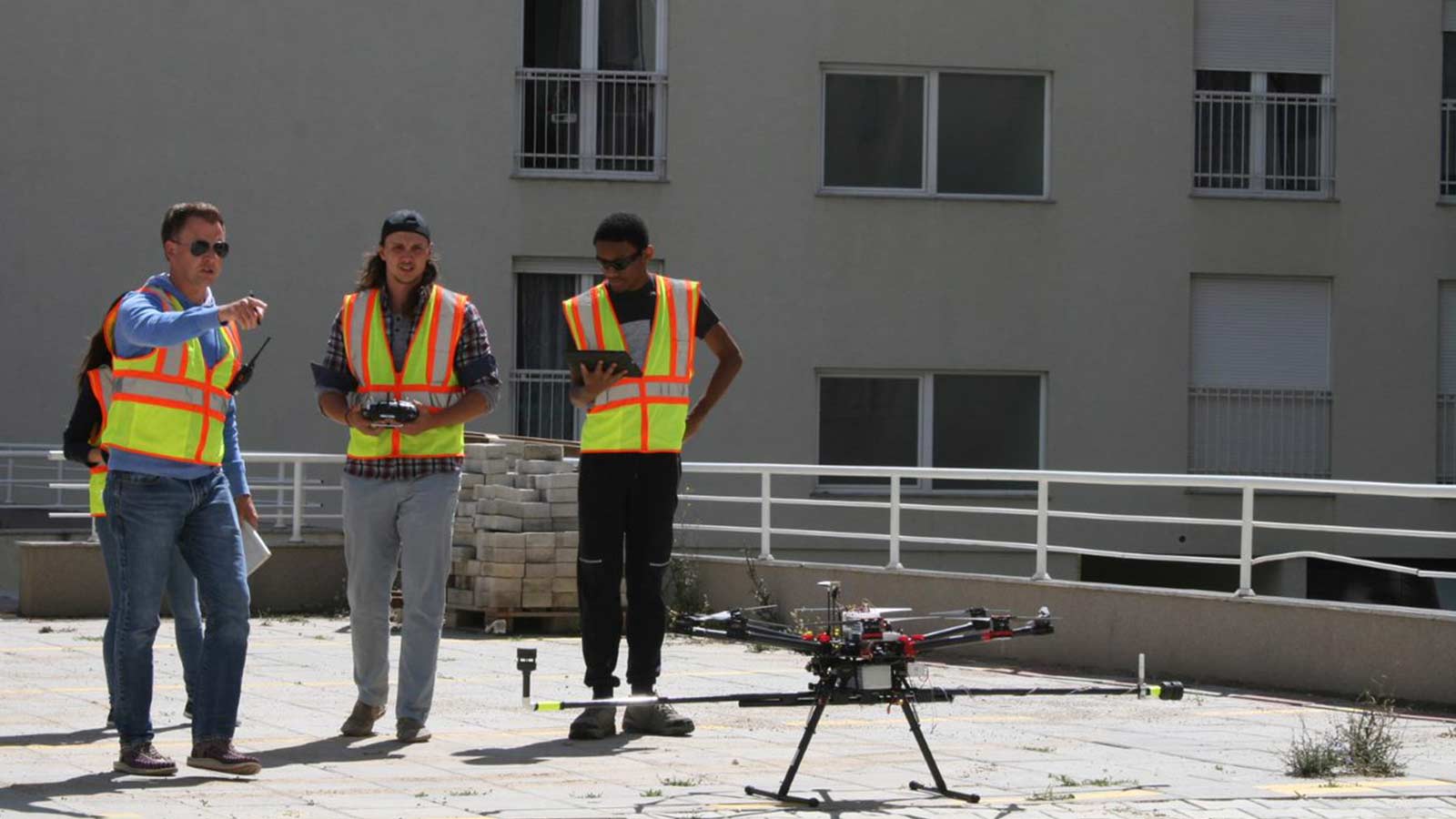 The team flew the S1000 and its sonic anemometer payload to measure the fluctuating wind within the atmospheric boundary layer. The atmospheric boundary layer is the atmosphere adjacent to the earth’s surface, and can extend up to about a kilometer above the ground. Surface conditions affect what happens above - heat from the sun hitting the earth and radiating back out, temperature differences creating pressure differences and creating wind, or buildings disturbing the flow.

Mapping and understanding these patterns is essential for urban air mobility.

Many surveyors and GIS professionals work alone or in pairs. The Embry-Riddle group had the advantage of numbers. The presence of two-dozen students meant that there were plenty of eyes on the UAVs at all times, and the group covered enough ground that all interested team members were able to take a turn at flying. 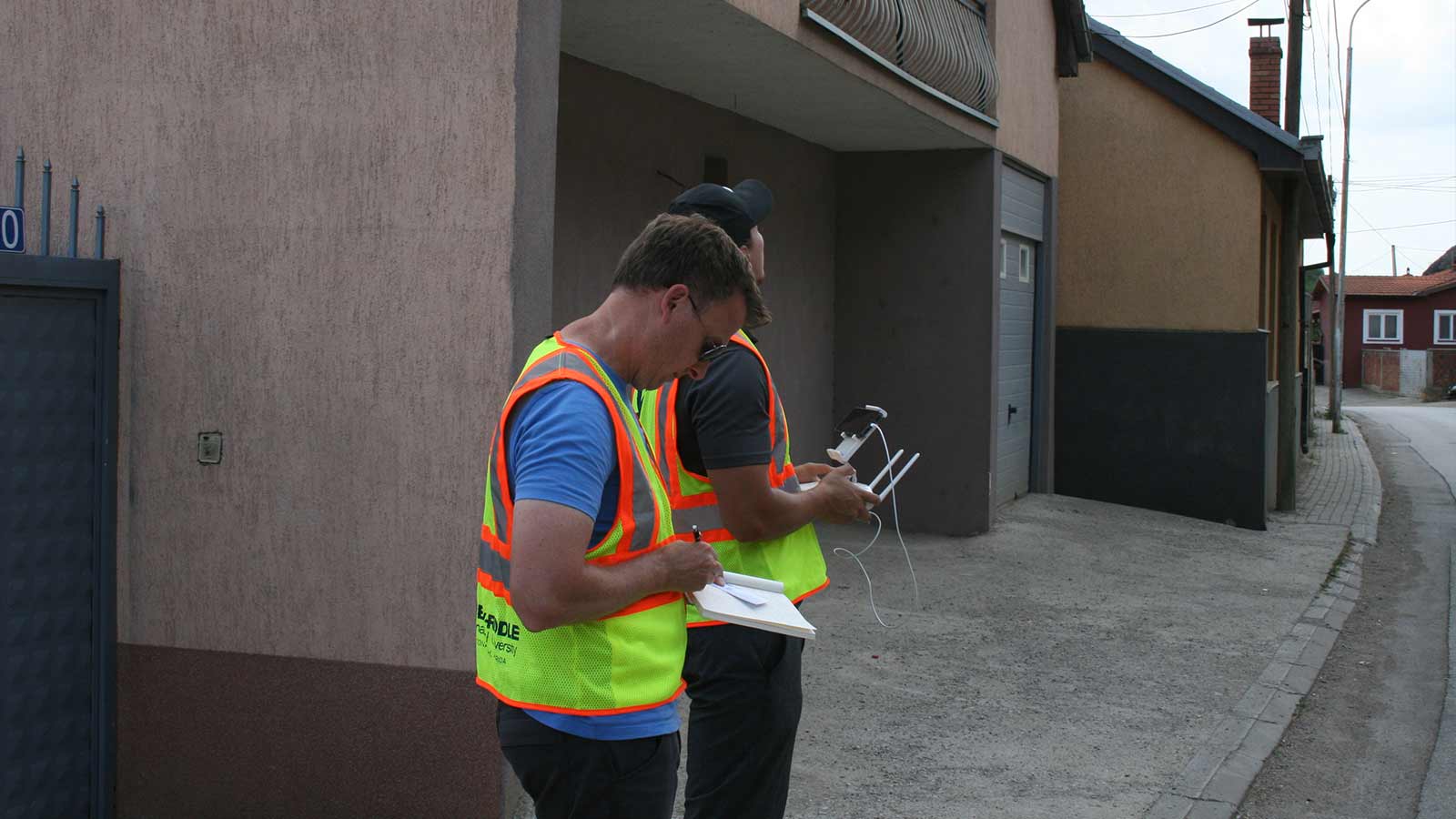 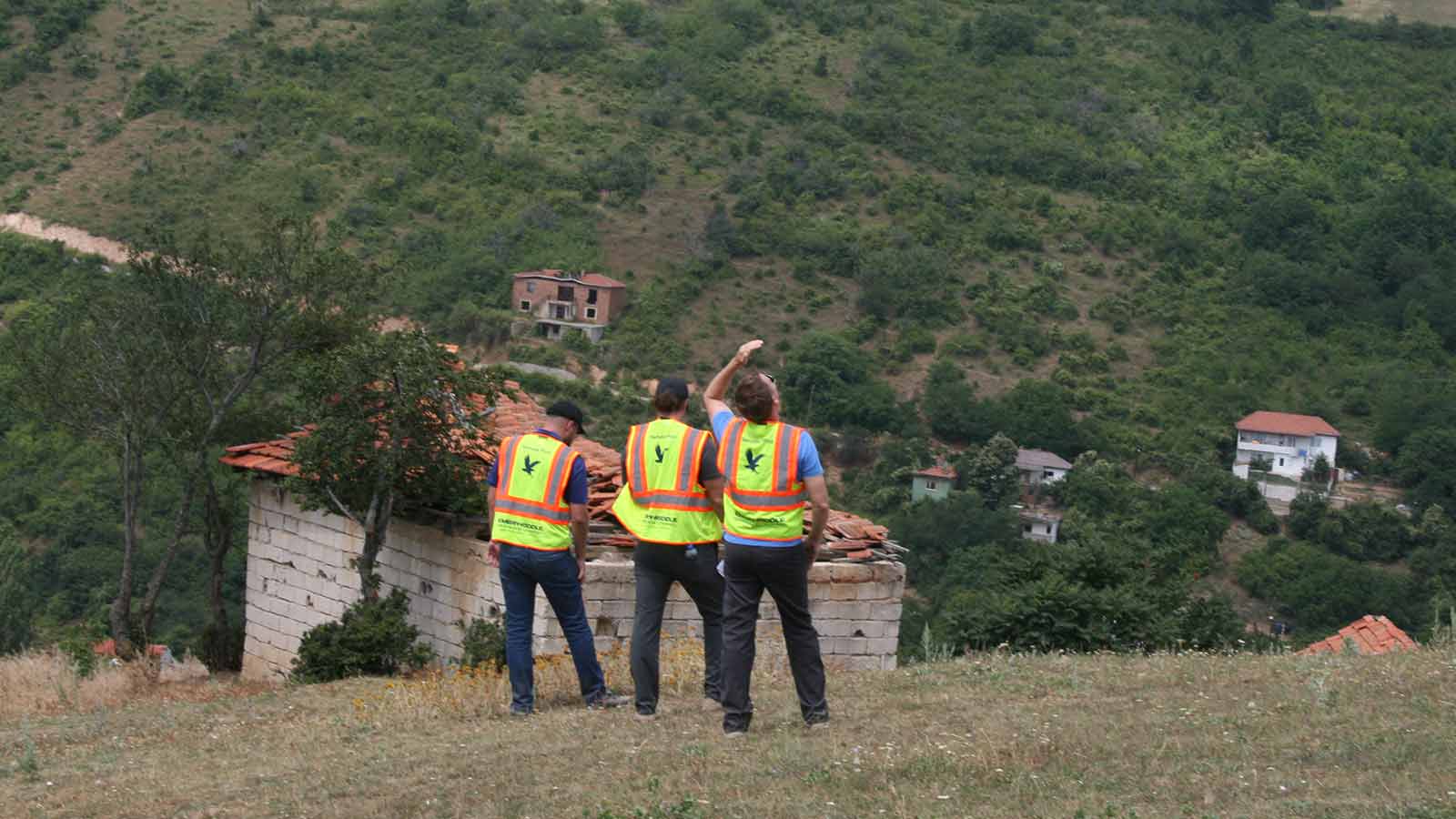 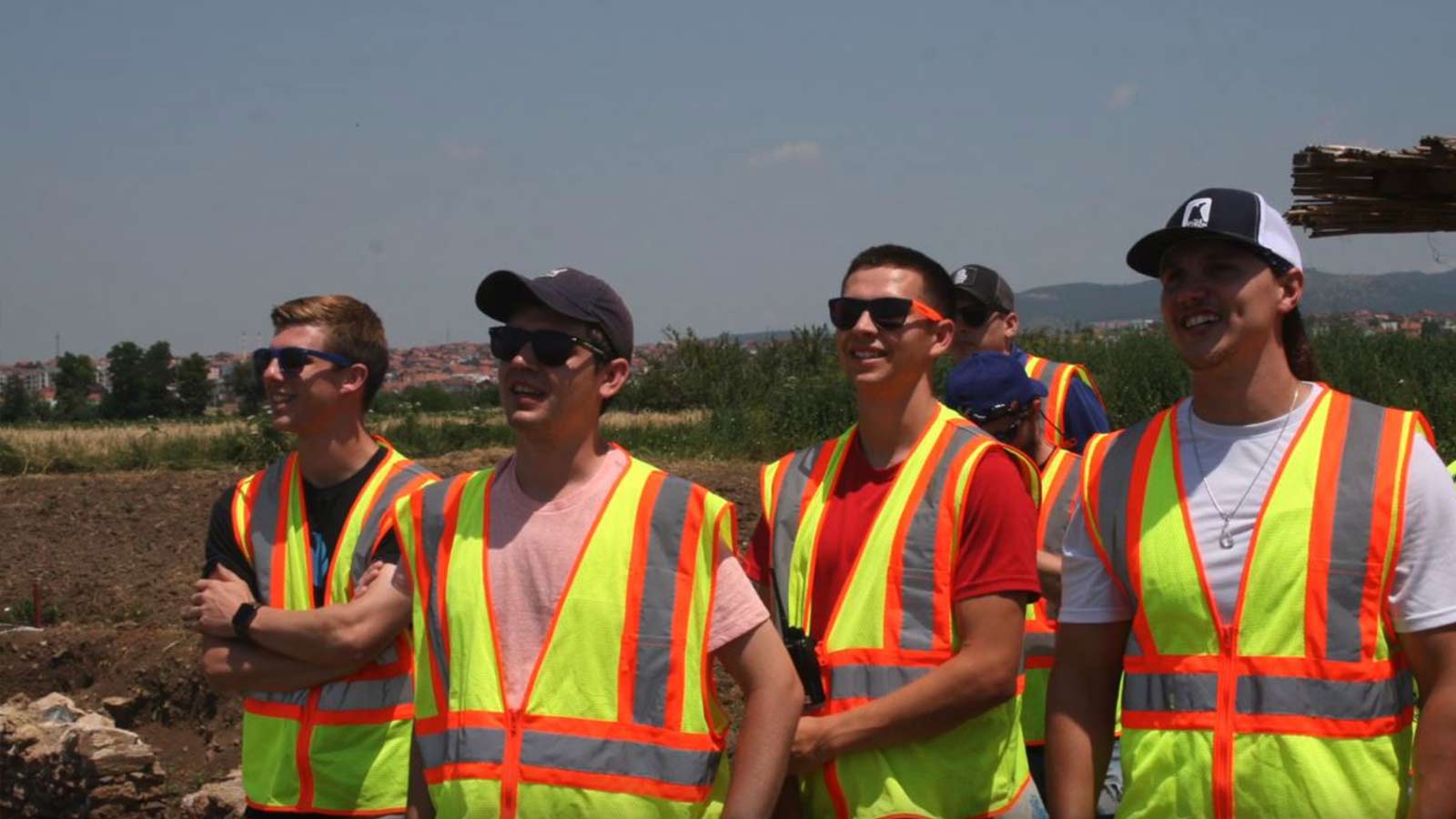 In addition to mapping urban flow, under the guidance of Dr. Dan Macchiarella, the group mapped buildings of historical or cultural interest in association with Cultural Heritage without Borders. CHWB is a non-governmental organisation dedicated to preserving cultural heritage. In some cases, their mission extends to digital presentation, as they believe everyone has the right to access cultural heritage.

The cultural heritage projects included The Church of the Black Madonna in Vitina-Letnica, where it is said that Mother Teresa found her calling. 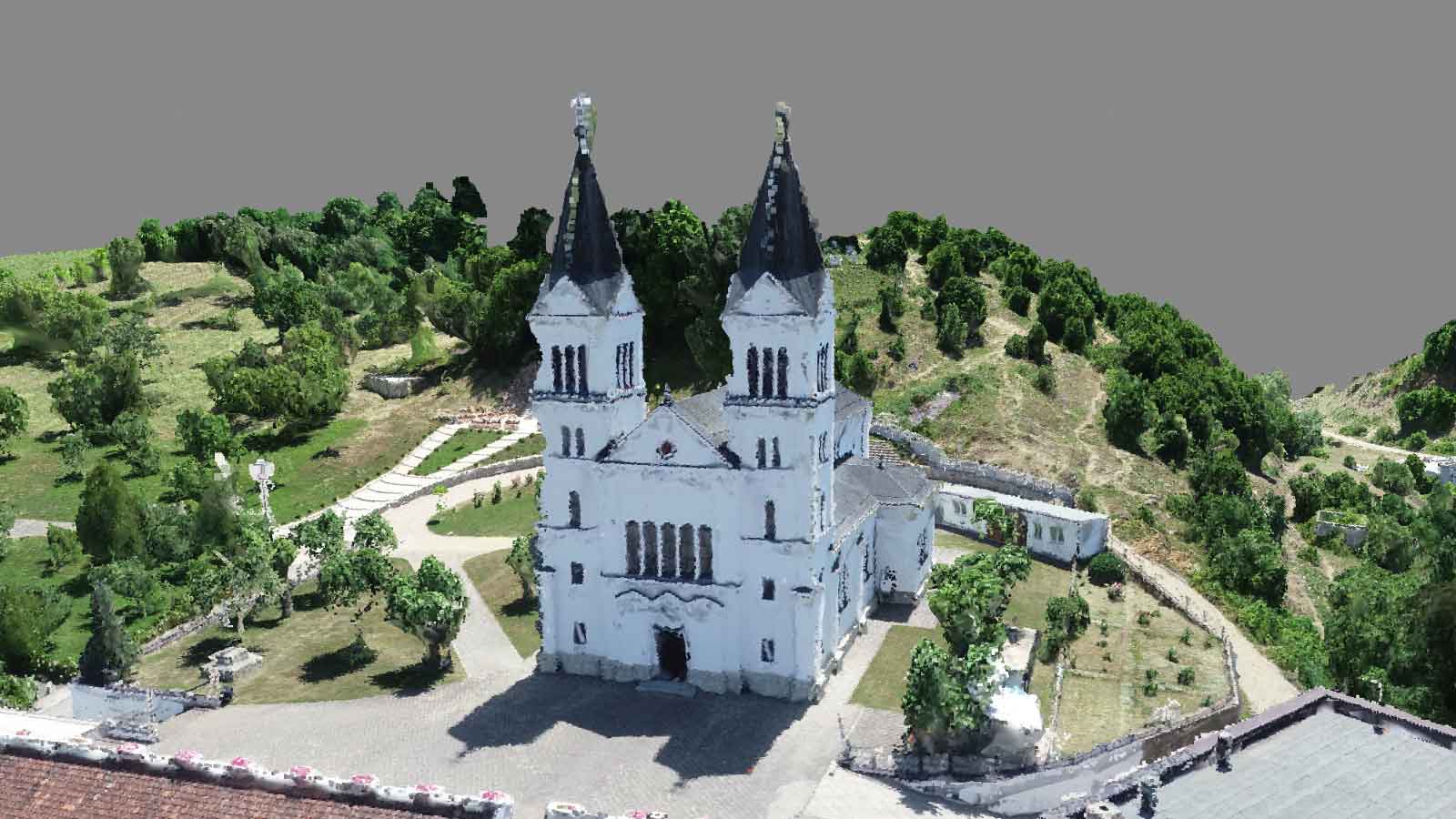 The Church of the Black Madonna in Vitina-Letnica, where it is said that Mother Teresa found her calling | Explore this model on the Pix4Dcloud

The datasets were wildly different in size. The group mapped some individual buildings, collecting less than a hundred photos. In contrast, the largest area covered was 400 acres (1.6 square km), which was captured in 1,500 images.

“3D models generated by Pix4D and merged with 3D wind components are paving the way for the future of Urban Air Mobility.” - Peter Wambolt
In addition to the RGB and multispectral images, the team worked with a CSV file from the sonic anemometer.

Processing the data took as little as one hour for the smallest dataset - and 15 hours for the largest. Most of the projects were smaller, and Wambolt and team were happy with the “Quick processing time.” They also liked that the results were “Easily exportable to others, and able to operate with or without the internet.” 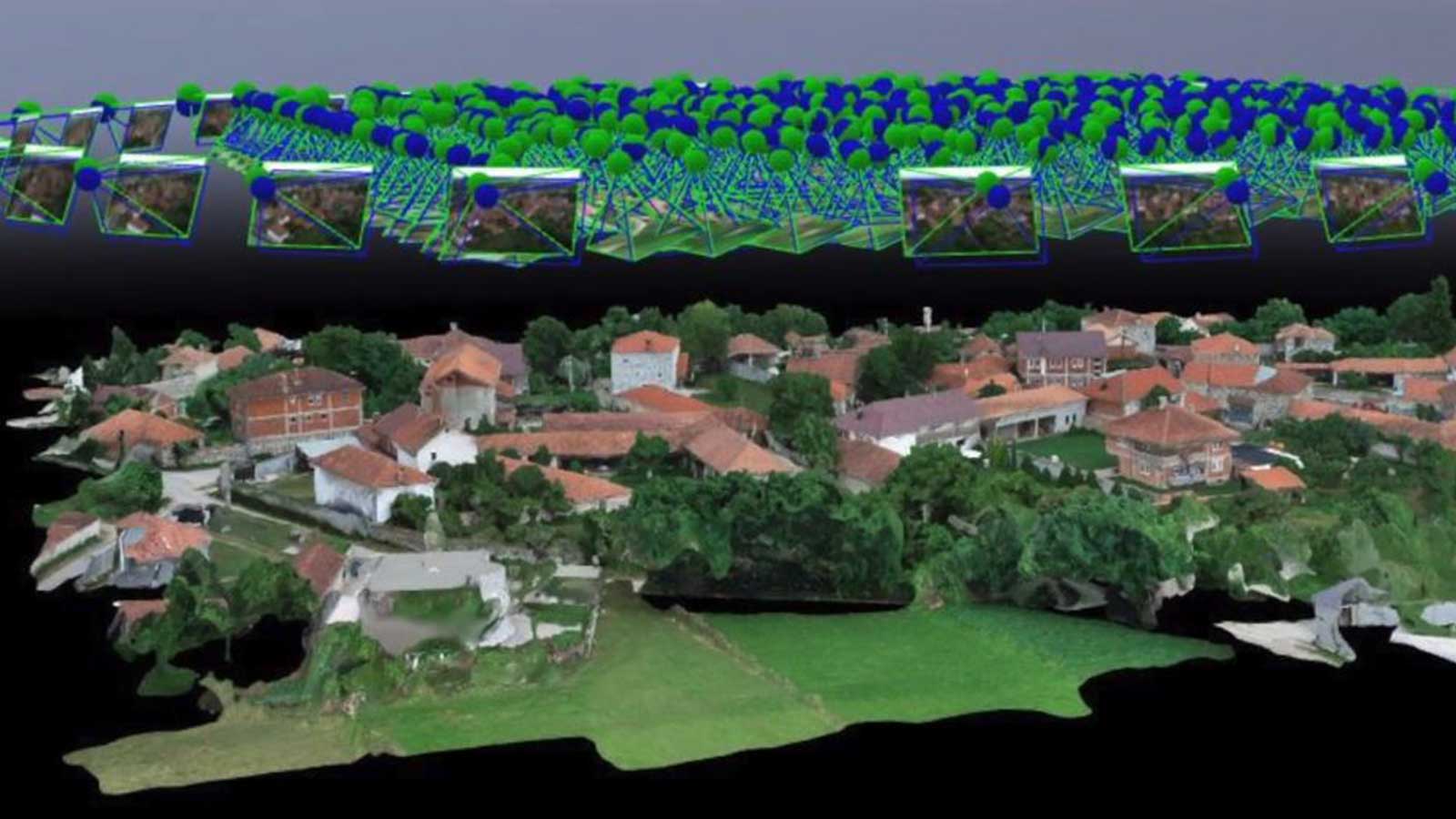 Recreating the model in Pix4Dmapper

We use road maps to navigate the city streets. But aerial maps won’t be sufficient to map the skies. Roads may remain static for years - even centuries - but the terrain that is the sky changes from moment to moment.

Dr. Adkins explains: “One of the challenges with urban areas is that each city is so different, so it’s hard to make generalisations. But if we can identify problematic areas, then we can investigate those more and identify areas of concern.”

Rather than create a map of every single city around the world, teams like that from Embry-Riddle Aeronautical University hope to create fluid dynamic models of air flow in one specific area. By creating a model of a limited and relatively static area, the formula can be checked and rechecked against various real world conditions before being extrapolated into other cities around the globe. “That will tell us two things,” says Dr. Adkins. “It will tell us how well the model is working and it will help us create better modeling schemes.”

Dr. Adkins continues: “We can take models of different types of cities with different footprints - because of course you can’t observe every single city and its intricacies, but we can make better models.”

“This was the first field campaign of what we hope will be many to come,” says Dr. Adkins. “Now we’re more confident with Pix4Dmapper and the workflow, we want to get up higher, get into more challenging spaces, and see where the science leads.”