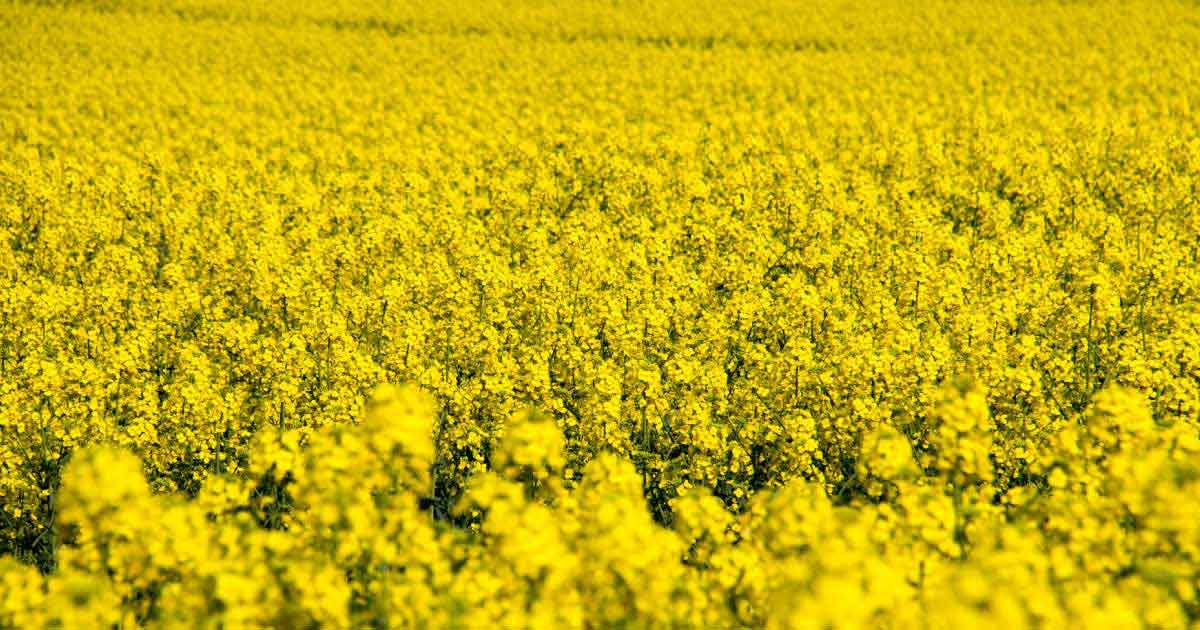 Drone mapping has been the ‘next big thing’ in precision agriculture for almost a decade. But the start-up cost of buying a drone and training the team to use it is a lot for busy farmers.

The Pix4D Fusion program bridges the gap, as one farmer and drone service provider discovered recently.

England’s ‘green and pleasant land’ is dappled with brilliant yellow rapeseed fields. The crop (also called rape, oilseed rape, and canola) is known for its characteristic bright-yellow flower and is cultivated for its oil-rich seed.

Rapeseed is one of the highest yield oils - its dark black seeds are 45% oil - and the other 55% is high protein animal feed.¹ It’s one of the world’s major oil crops, and of the 70 million tonnes produced annually, 2.2 million tonnes is produced in the UK. Rapeseed is one of the most common break crops in the country. Break crops are generally a pulse or oilseed crop grown instead of cereals. Introducing a break crop typically improves productivity and economic value.²

As a high input, high output break crop, oilseed rape has become increasingly important over the last decade for intensive arable farmers. It can provide a good income and goes well in a rotation with wheat, which is often the most profitable cereal crop.³

However, rapeseed is extremely vulnerable to a large number of pests, diseases and animals such as wild game: particularly pheasants and partridges. In addition, this year the major pest has been cabbage stem flea beetle (CSFB) which although has been a problem in the East is now a major problem further west.

To make this crop more viable, farmers and service providers across the UK are exploring new technologies such as drone mapping and precision agriculture to scout and assess the fields for any potential issues. 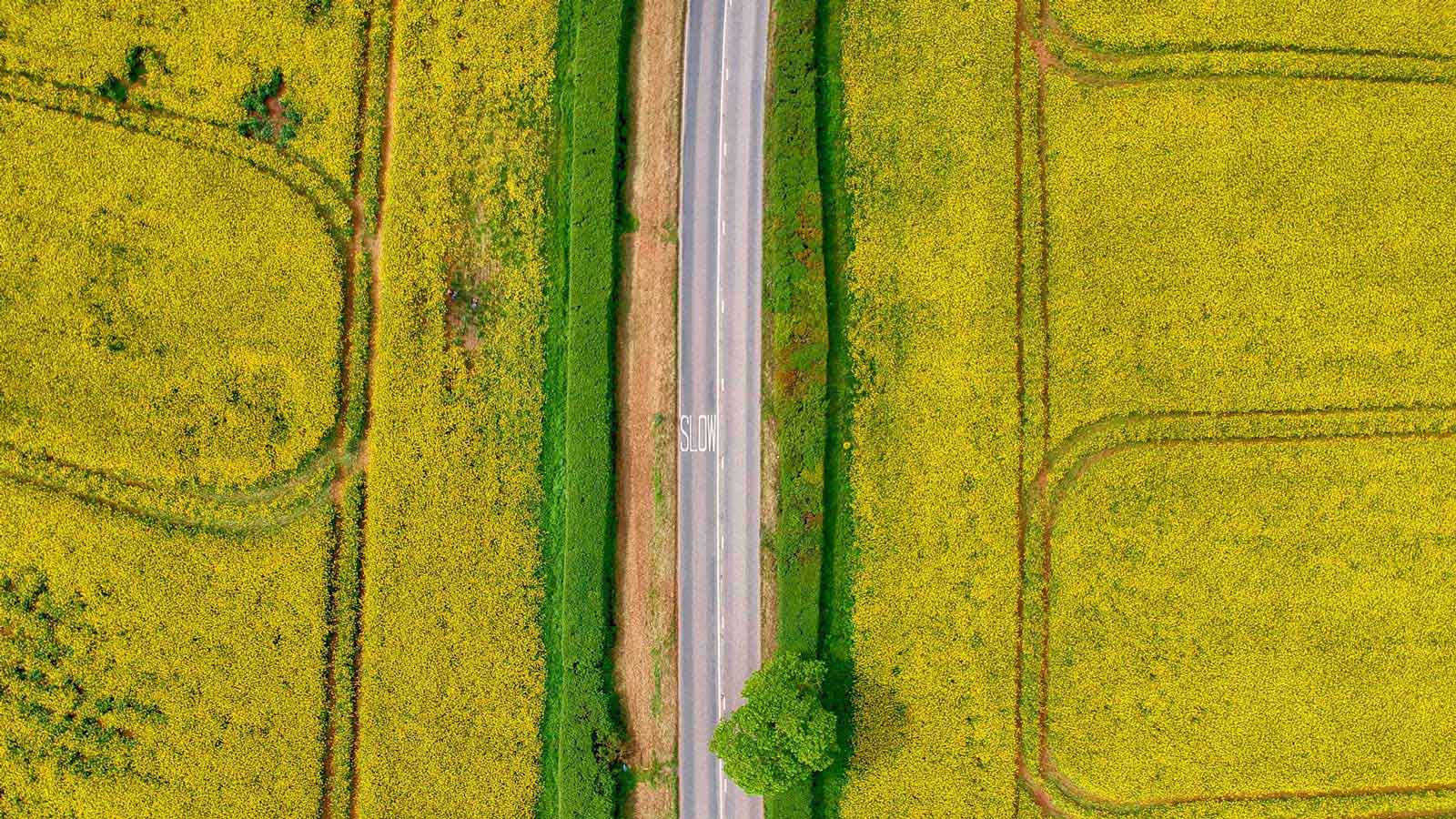 Drone image of a rapeseed field

With the introduction of the Pix4D Fusion program we have opened the door to drone mapping for precision agriculture on demand.

A drone, camera and software can be rented for a specific period, allowing users to leverage the technology for seasonal issues, without a large upfront investment.

One of our early adaptors for Pix4D Fusion, Chris Eglington, CEO of Crop Angel, did exactly that.

Crop Angel specializes in the delivery of agricultural services using UAV technology. They were one of the first companies to offer crop spraying drones within the UK. They also work closely with YEN (yield enhancement network) on their momentum project which involves farmers trying out different treatments and timings of various applications onto various crops to optimize workflows and yields.

A rapeseed farmer was concerned about the damage caused by pheasants, and needed an accurate damage assessment of his field. The farmer asked the Crop Angel team if drone mapping could help.

By renting a Pix4D Fusion bundle, Crop Angel was able to perform the assessment in no time.

“The ability to rent the drone bundle for the period of time I really need to use it, makes my workflow really flexible and if my project ends up taking longer than expected I can simply extend the rental.” says Eglington

Eglington performed one flight using the DJI Phantom 4 Pro mounted with a DJI RGB camera. Once the data was collected, the 432 images were uploaded and processed in Pix4Dfields.

“With the bundle I rented, I also got the Pix4Dfields software which I have used before so I know I can just process my images directly in the field without needing an internet connection. Plus I can show the damaged areas to my client immediately,” Eglington states.

The total processing time for this project was six minutes. 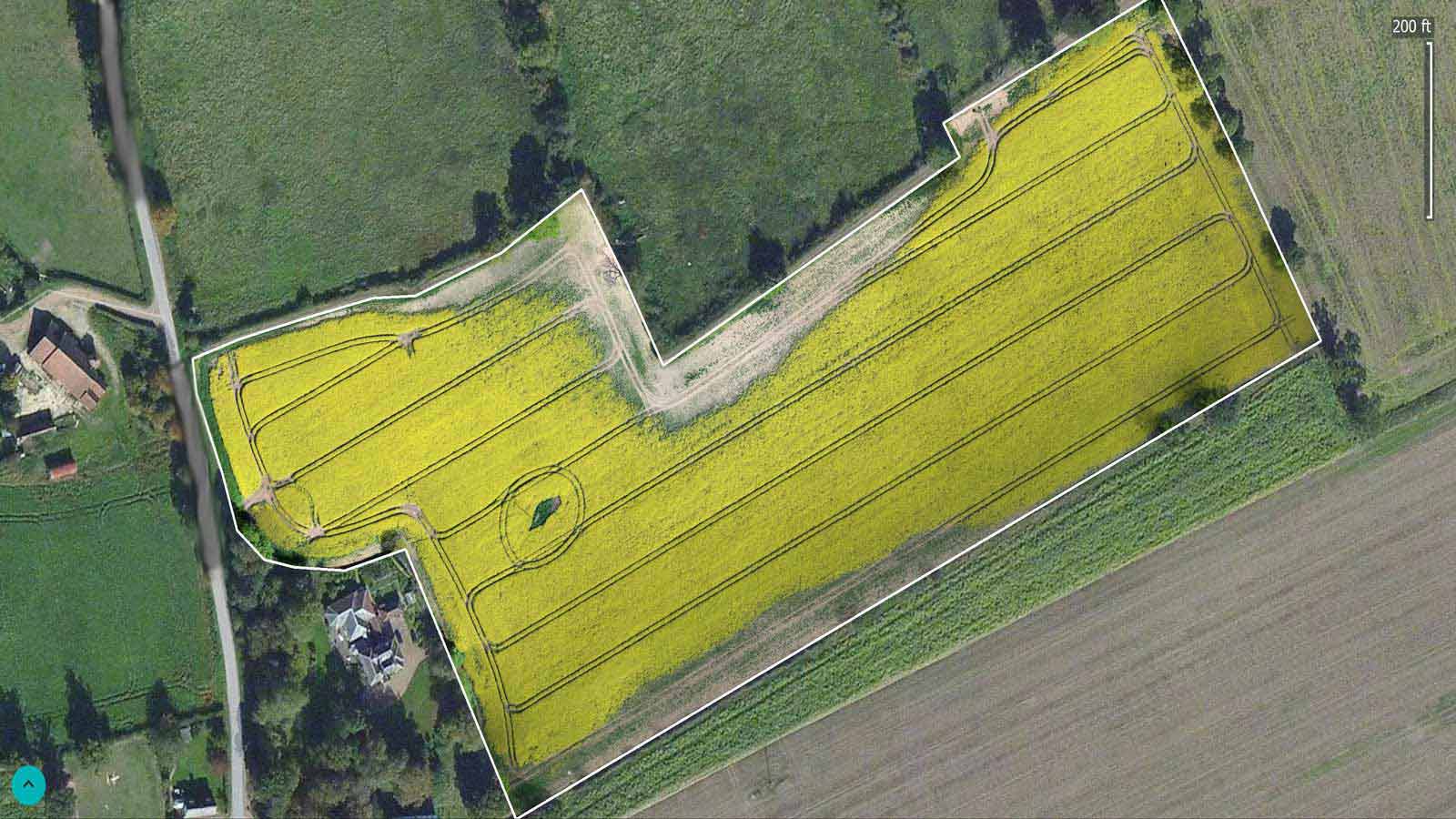 Orthomosaic of a rapeseed field generated in Pix4Dfields 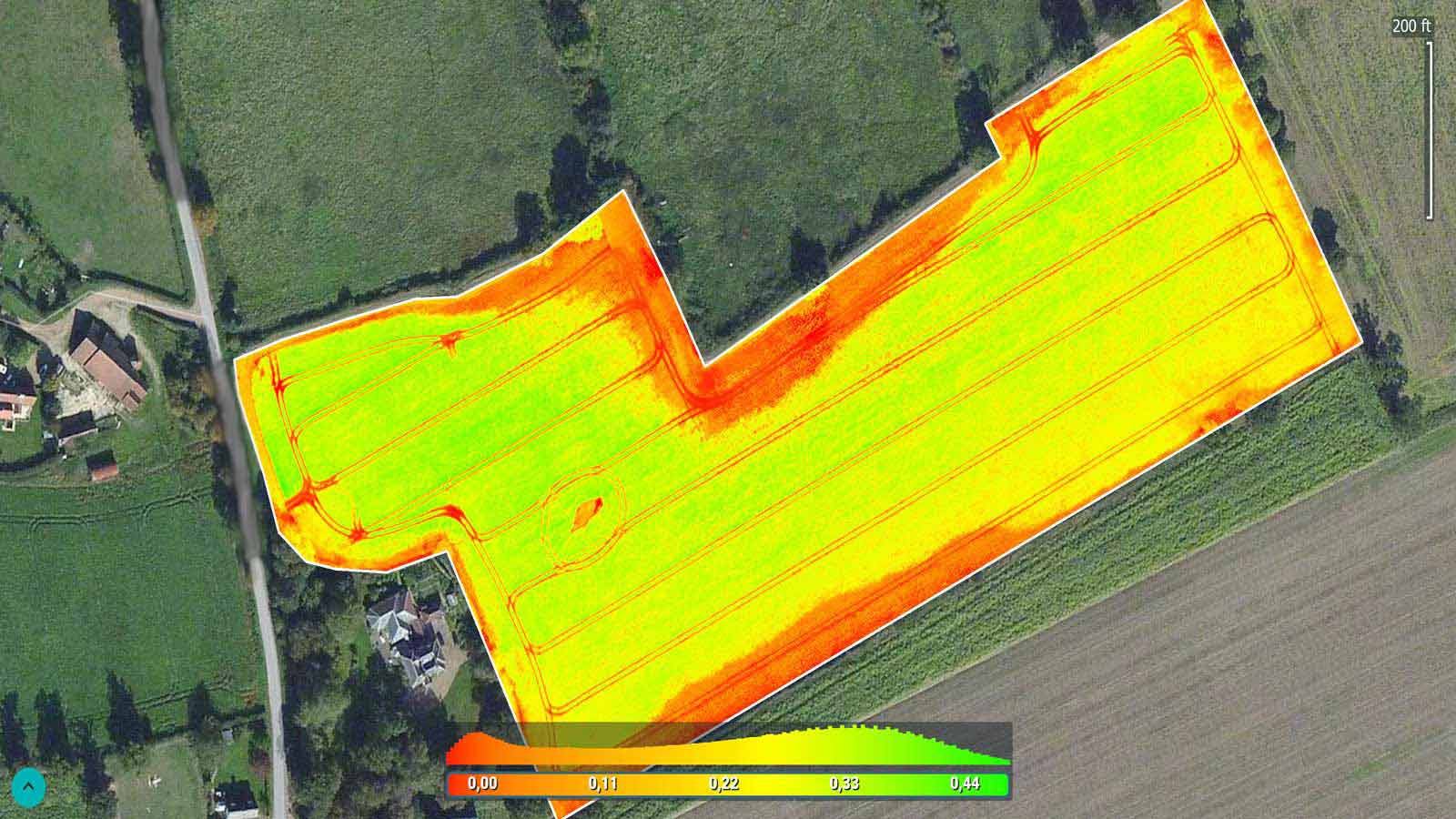 TGI index map of the rapeseed field generated in Pix4Dfields

With the PDF report tool, Eglington created an overview of different software outputs his client requested and then continued to the area damage assessment. Once the orthomosaic was generated, Eglington uploaded it to the Pix4D Cloud and by using the measure tool calculated the size of the damaged area. 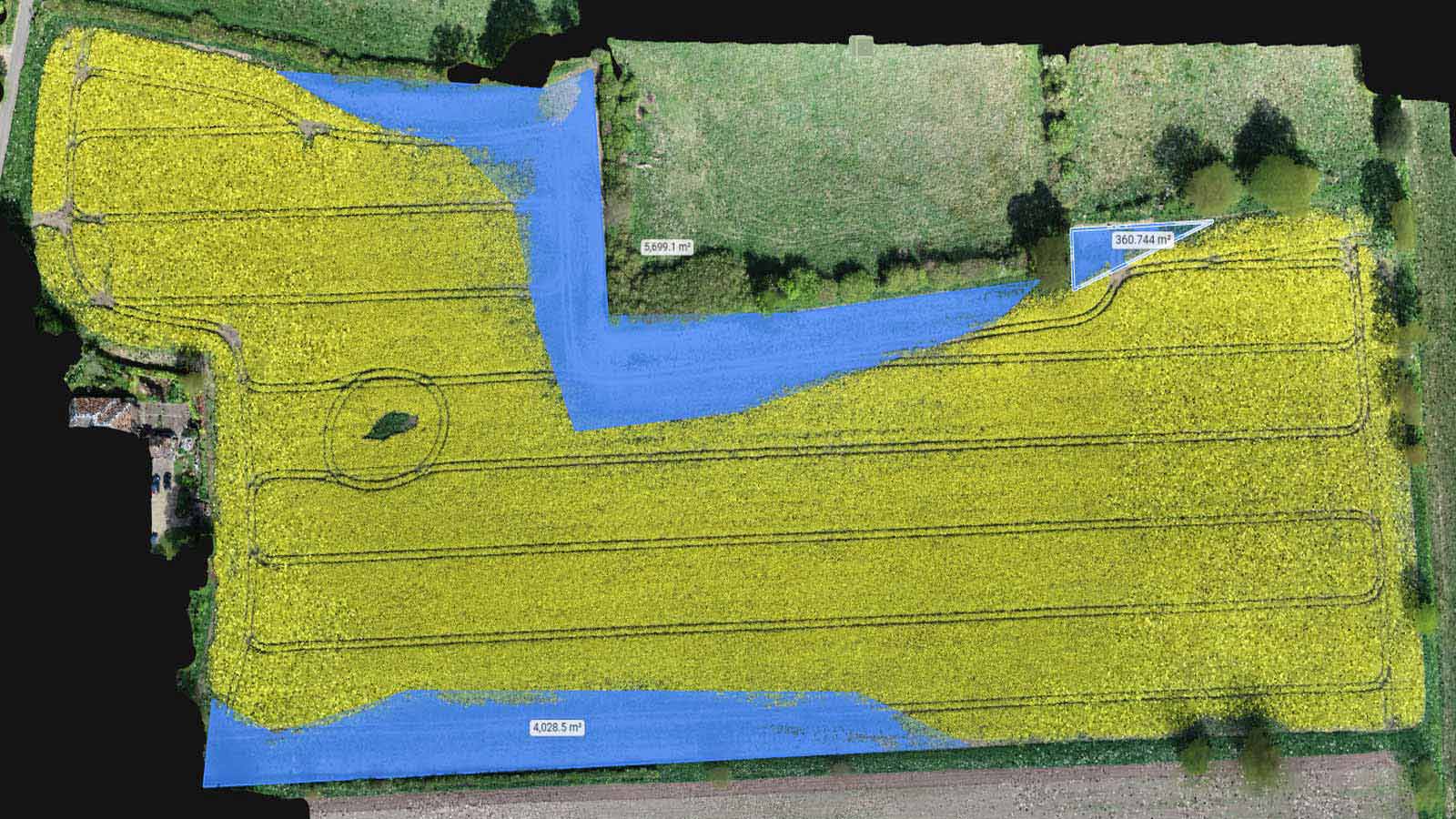 “I think it’s important to have tools to support your work, because in situations like these it becomes essential to have a way to prove and provide context fast and accurately in order to negotiate compensation,” Eglington concludes.

Ready to get started?

Interested in trying out the precision agriculture technology on your farm? Take the first step and discover Pix4D Fusion flexible bundles. 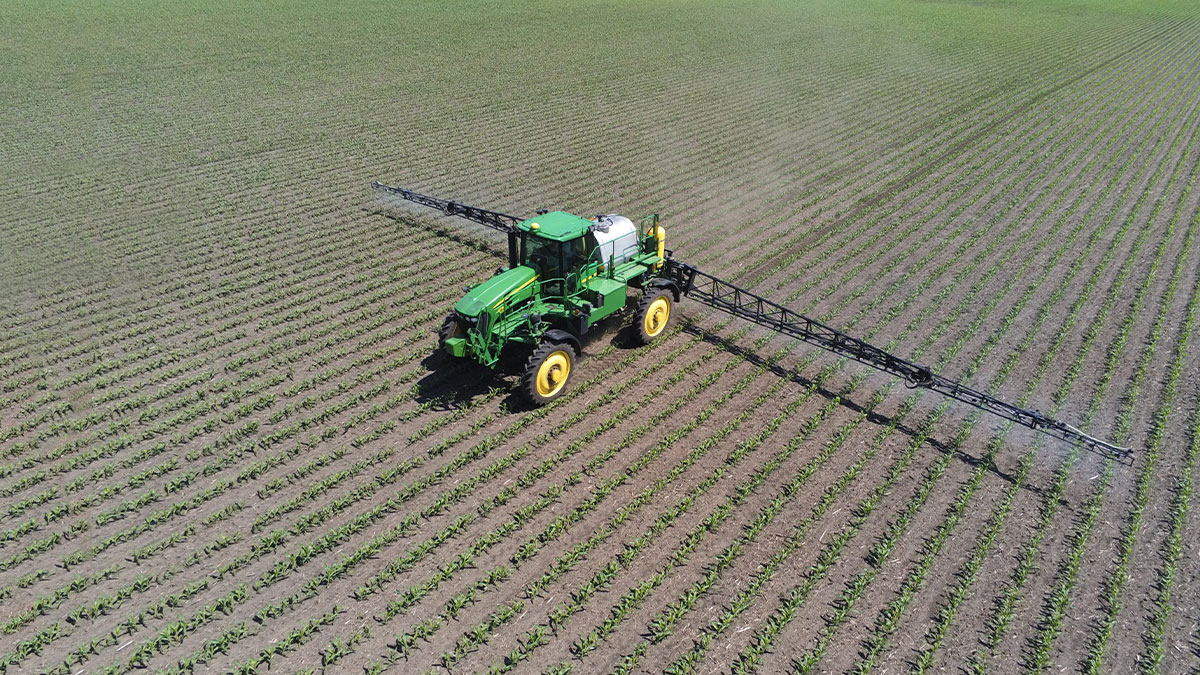 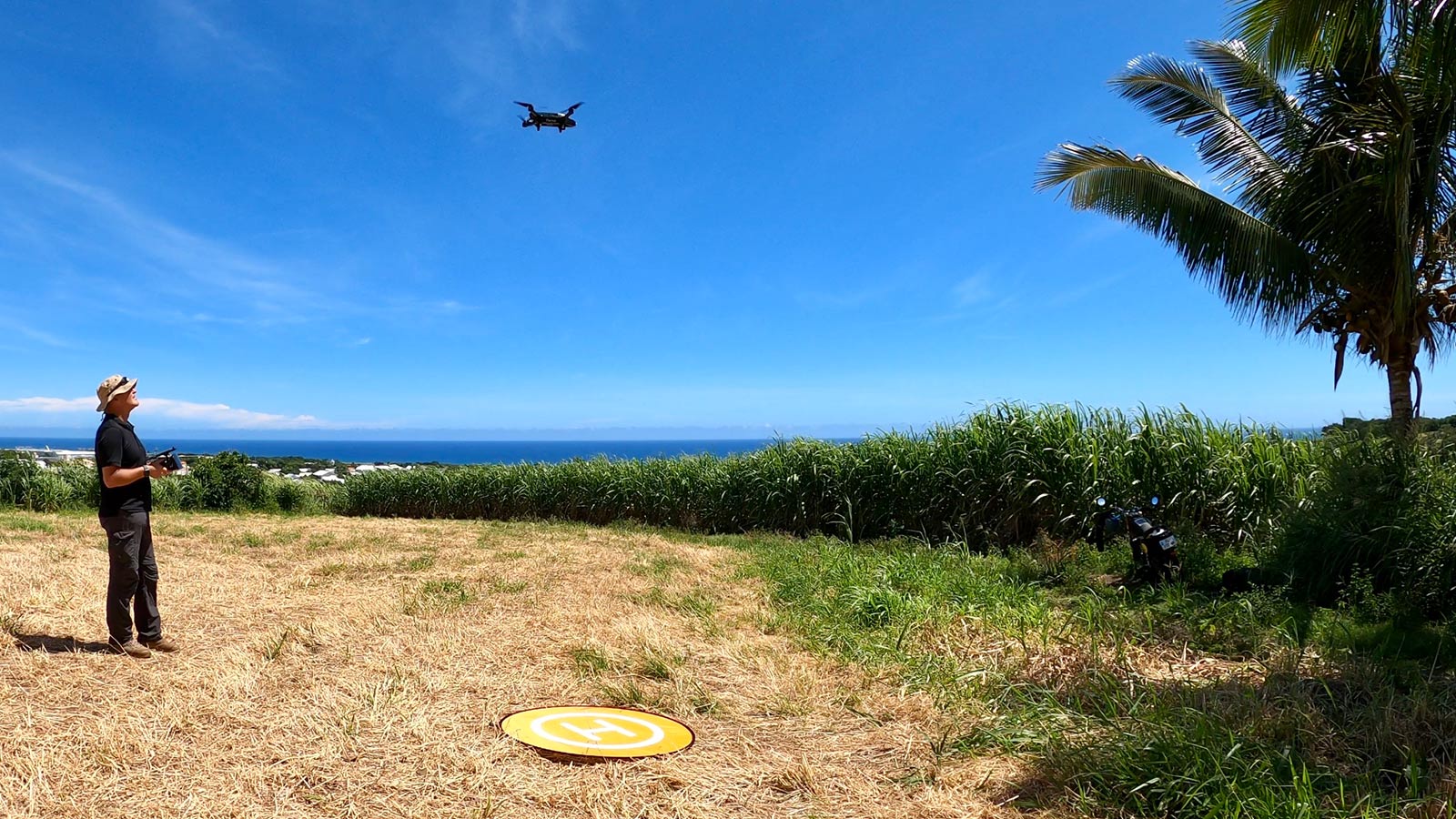 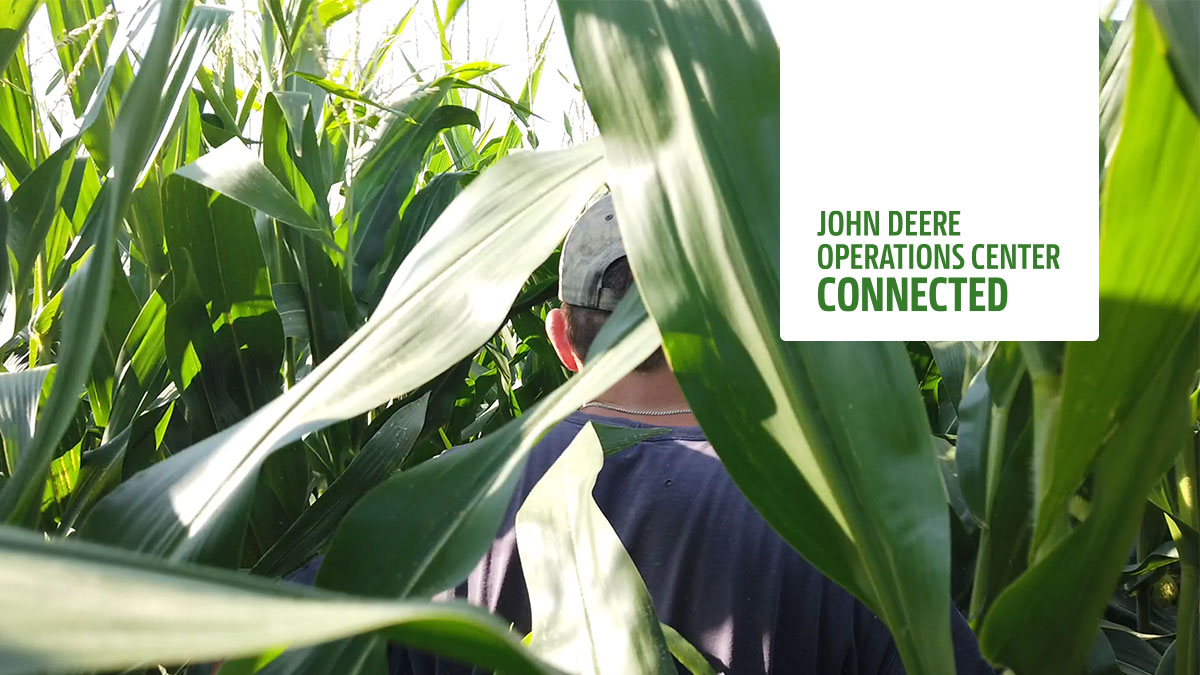