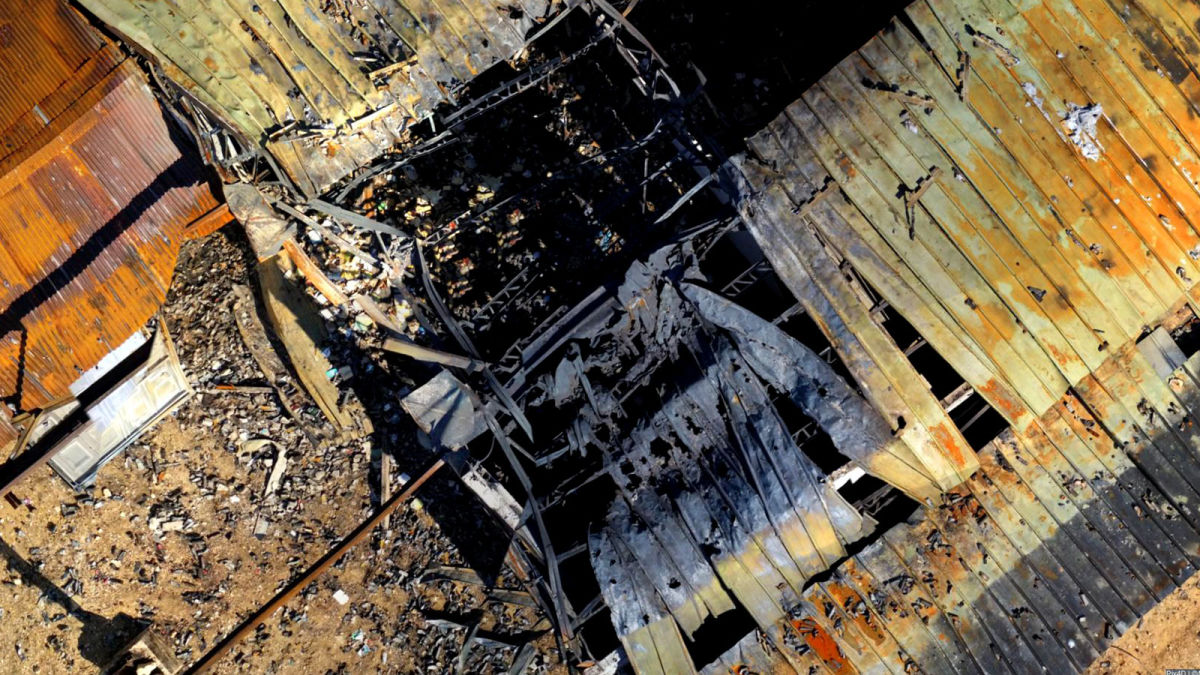 PIX4Dreact in the field: flying over a warehouse fire

January 12, 2021
Fire responses require speed, accuracy and control - drones and PIX4Dreact combine this with the pilot’s cool head under pressure.

Don’t get too close to the fire - regardless of if you are an emergency responder or not, the instinct is the same. Using drones can protect firefighters in the field as well as help to assess techniques and share best practices. Vendelin Cliques, President of the International Emergency Drone Organization (IEDO) and a Lieutenant at the Yvelines Fire Department in France, is the manager of the Intelligence Team which is bringing drones to firefighting.

In the summer of 2020, the Yvelines Fire Department assisted in putting out a warehouse fire, where they used a drone and PIX4Dreact for their response. The assignment had a two-part role for the Intelligence Team: firstly, to assist in the field during the live fire and secondly, to create a model of the structure afterwards for the fire investigation. 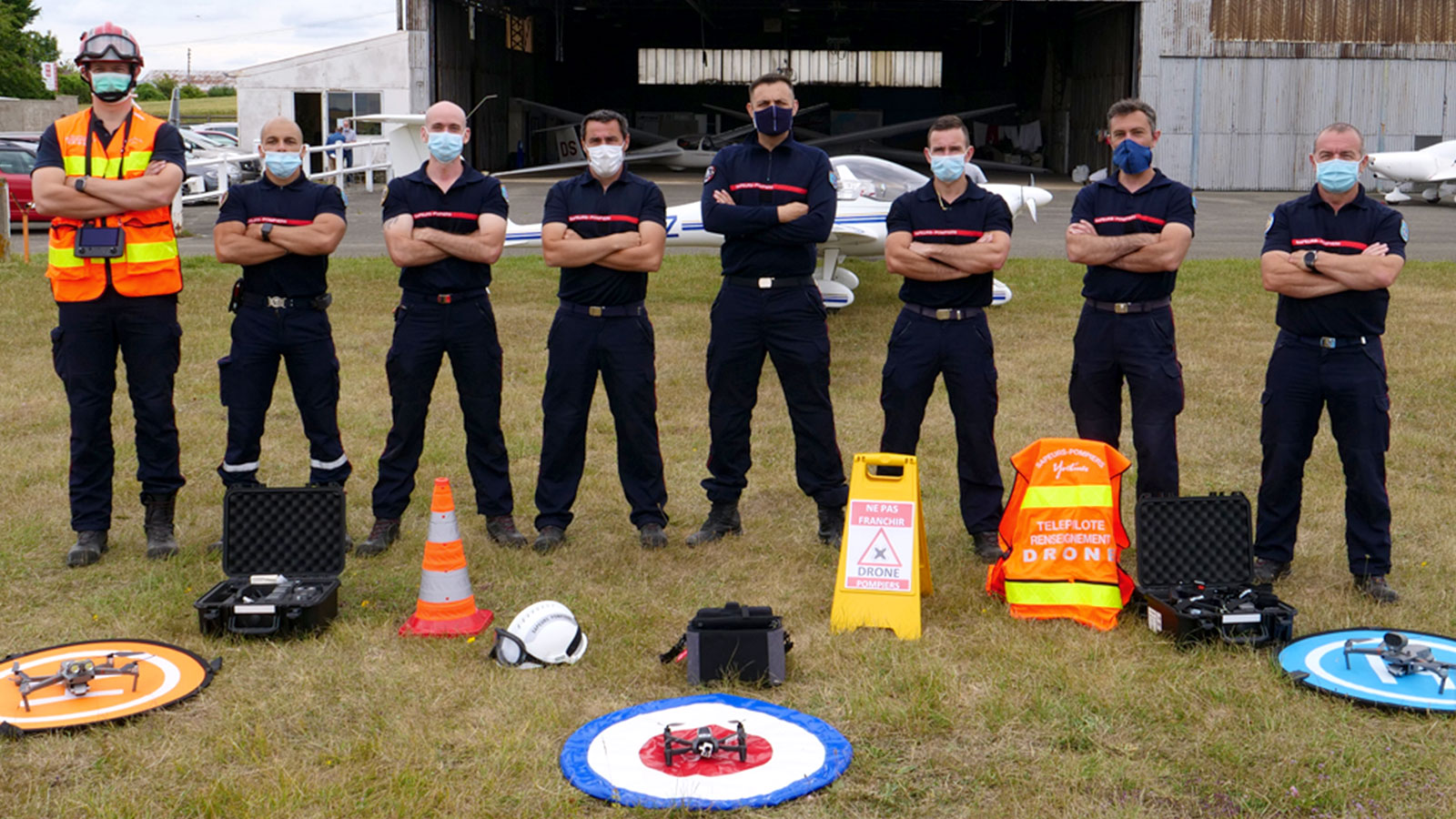 Members of the Intelligence Team from Yvelines

The Intelligence Team is made up of 17 firefighter drone specialists as pilots or team leaders. This firefighting drone project has been successfully integrated into the department, so the unit is now highly effective in drone use firefighting. Their roles vary between assisting the incident commander to providing aerial intelligence during a fire, searching for lost victims and ensuring the safety of river-diving while firefighting.

The challenges of a drone fire response

Firefighting even with a drone presents several specific challenges. The first obstacle is piloting the drone in an extreme situation, where the flight must be prepared quickly, taking into account airspace traffic, obstructions or hazards and the weather. This is especially difficult for the Yvelines team because the pilots need to fly low to collect data and get useful images on the thermal cameras. This puts the drone at risk of collisions with antennas, wires and trees as well as strikes from aggressive birds or debris moving in the fire. All of these could damage or knock down the drone, costing the department money and wasting precious time.

To counter these obstacles, the Yvelines pilots have established a special workflow through working in pairs. One pilot will maintain a visual line of sight with the drone and manage aerial safety, whilst the other will analyze the feed on screen, look for ground obstacles and maintain radio communication with the incident commander. This teamwork enables them to manage the risks without losing time or the drone. 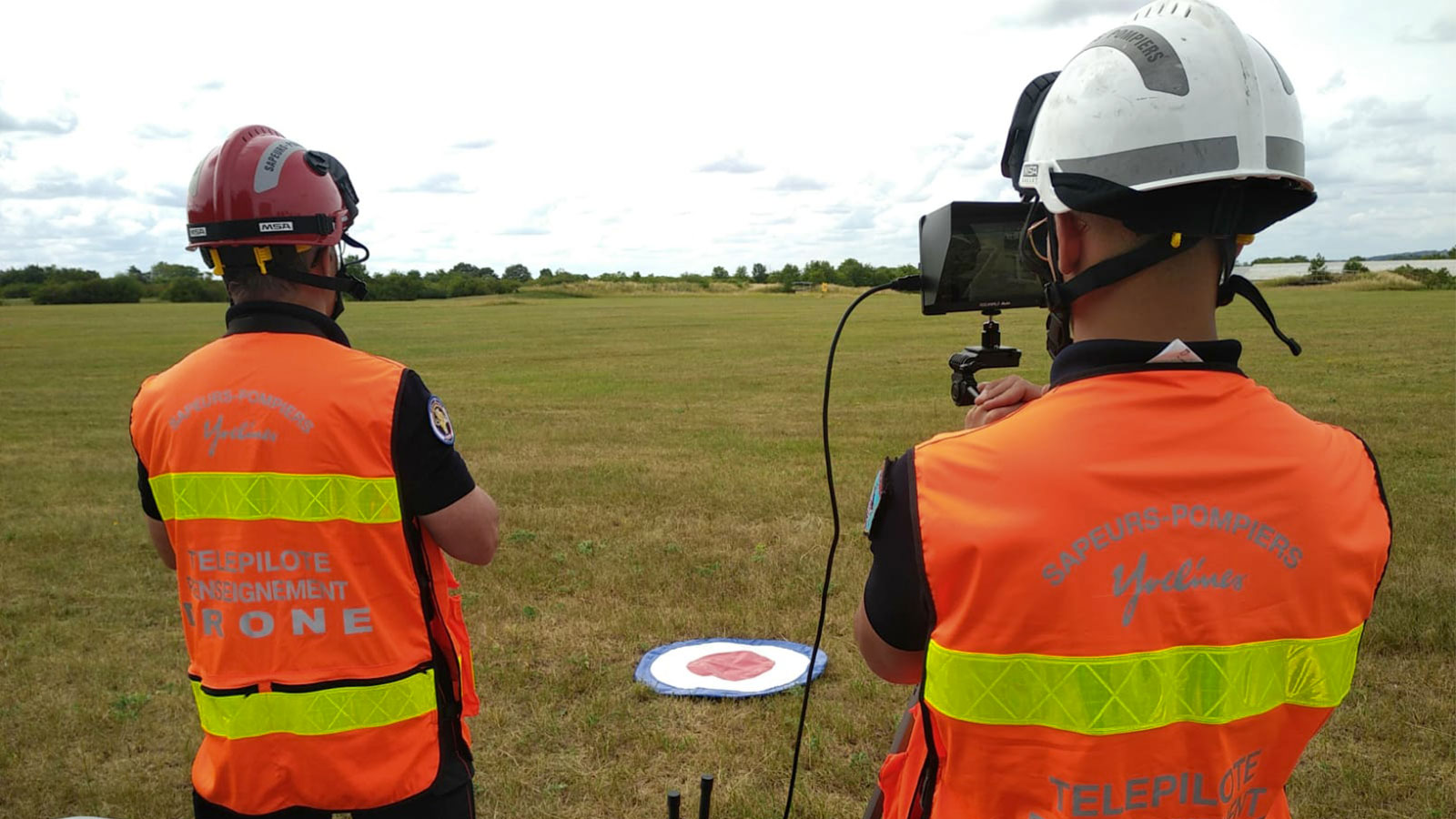 The partnered pilots working in the field

An unexpected challenge that the Intelligence Team also faces is curiosity. Whether it is from bystanders or fellow firefighters, people are interested in how the drone works, what is happening and how it helps. That means the drone pilots can be bombarded with questions or distractions from other people as they try to control the flight. Typically, firefighters set up a cordoned off area where they are operating. Now, Lieutenant Clicques and his team create a separate space within that first cordoned off zone for the drone team, so they can work as fast as possible without distractions. 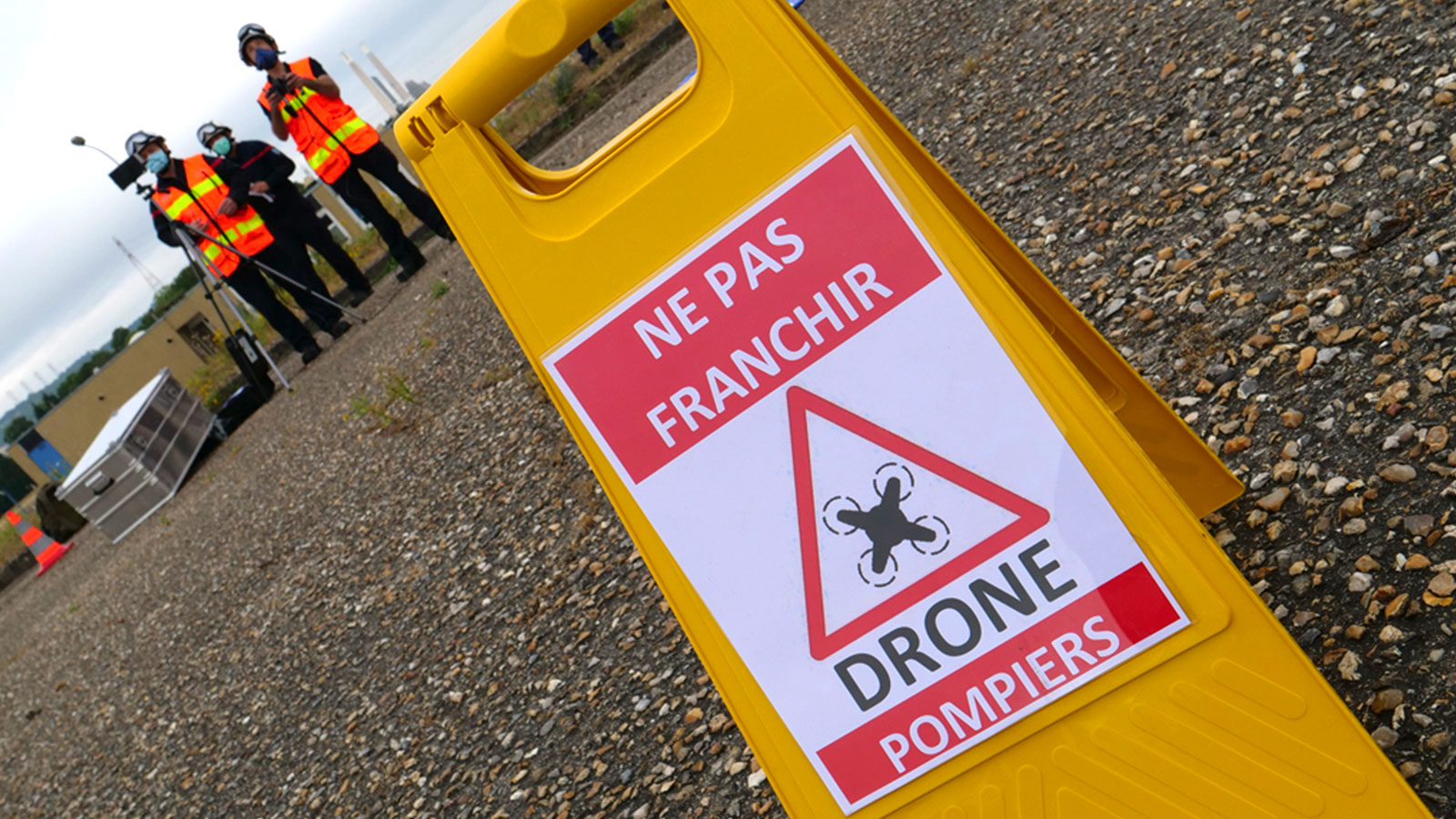 The warning signs to cordon off the area

Finally, Yvelines is an area with high military and civilian aerial activity. Gliders, a non-motorized aircraft, are especially popular in the region. This means the Intelligence Team has to coordinate with air traffic control using a VHF aeronautical radio to ensure flying the drone will not disrupt aerial activity or put anyone at risk.

“Flying a drone in these situations isn’t just about turning it on and taking off. A lot of safety procedures are needed. If you aren’t careful, you could cause 1kg weight to fall on someone’s head.” - Vendelin Clicques

Clearly there are several challenges involved with using drones for firefighting within the Yvelines Fire Department. However, the pilots have found a system that lets them use drones to assist their colleagues without endangering people by paying attention to specilized drone safety protocols.

The warehouse fire the Intelligence Team attended was burning through the roof of the structure, causing significant damage and becoming difficult to control. Lieutenant Clicques was reporting to the Incident Commander, who was in charge of the scene. The Incident Commander coordinates the fire emergency response and decides what materials to use and when firefighters should enter or leave a burning building. Using drones to inform the Incident Commander helps support the emergency response. Clicques used PIX4Dreact to present a map of the site, which took just 6 minutes to process 108 images. Clicques’s team also mapped the nearby waterline to assess and better understand their surroundings. This resulted in 336 images, which PIX4Dreact rapidly processed into a map in 8 minutes. 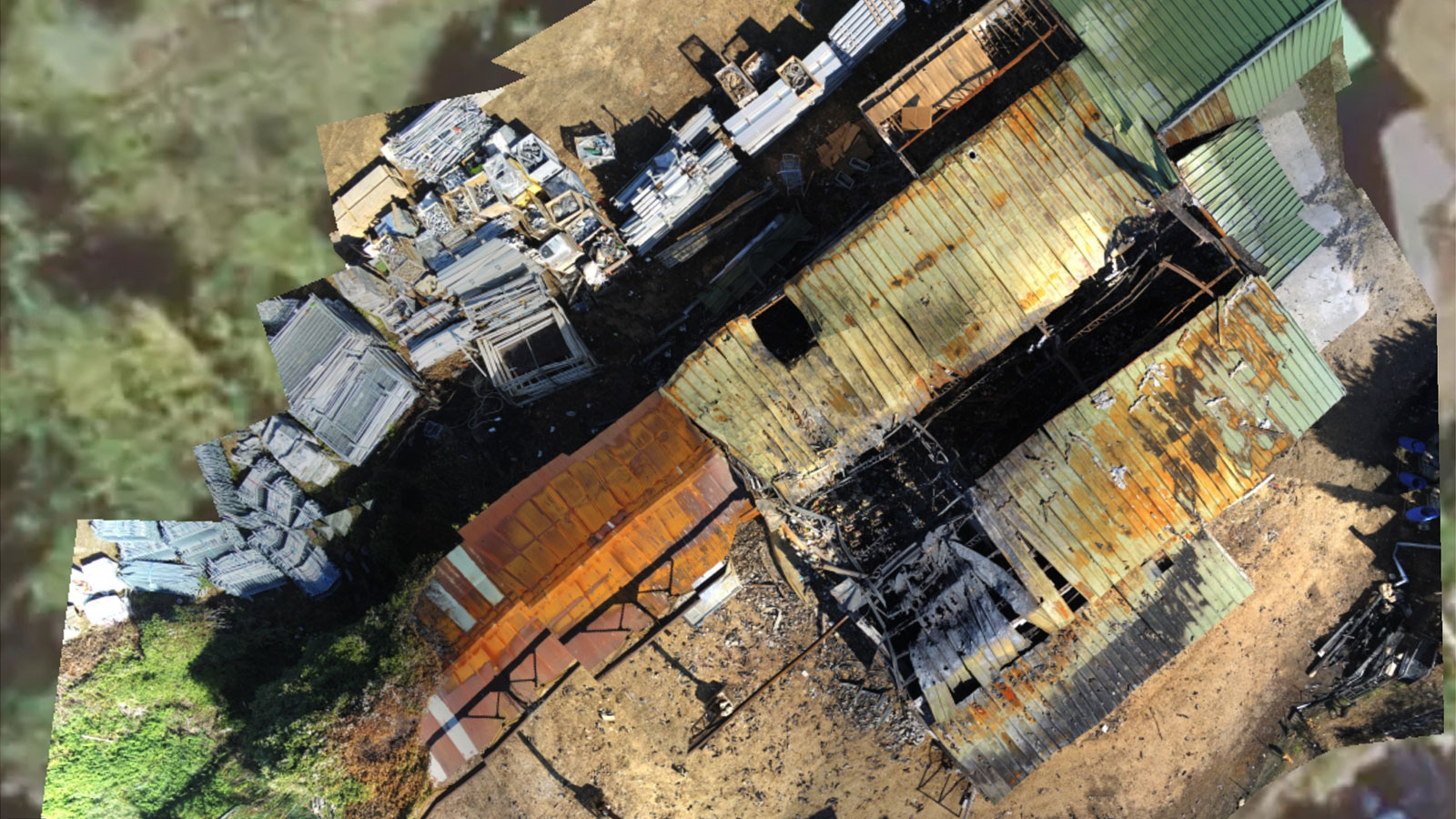 A map of the heart of the destroyed warehouse
The speed of PIX4Dreact meant the Intelligence Team had data ready for the Incident Commander incredibly quickly, which informed on-site decisions.

Photogrammetry, or the science of measuring from images, can be very useful in assessing fire damage and impacts after the blaze has been extinguished. Several months after this incident, the drone unit was called back to the same site to aid the fire investigation team. Fire investigations need accurate data about a scene to determine the cause of the fire and provide reports to insurance companies and the authorities as needed. These reports take place all over the world, whether it is a wildfire like in Australia in 2020, or structures like in this use case. It is important to respect the integrity of a site - if the drone crashes and dislodged something, it could affect the findings of the investigation. The Intelligence Team used the Parrot Anafi Thermal drone for this firefighter drone project, and carefully flew around the scene. The aim was to make an accurate, sharp 2D model for the investigation unit using PIX4Dreact. They only needed 39 photos for this, and rendered the orthomosaic in under 10 minutes.

As a result of this project with PIX4Dreact, Lieutenant Clicques was able to help the Incident Commander live in the field and proove the efficacy of 2D mapping in a high-pressure situation. PIX4Dreact was fast and informative, useful in both the live fire and the legal investigation afterwards.

“The joy of PIX4Dreact is that it works on a basic, administrative computer. We didn’t need a specialist, expensive computer to be able to use the software effectively”. - Vendelin Clicques

The flexibility of the software boosted the overall efficiency of the Yvelines Fire Department. Having that extra information and imagery from the drone improved the firefighters’ emergency response, strengthening public safety. The aim will be maintaining this workflow in the future, without burning the drone’s propellers!