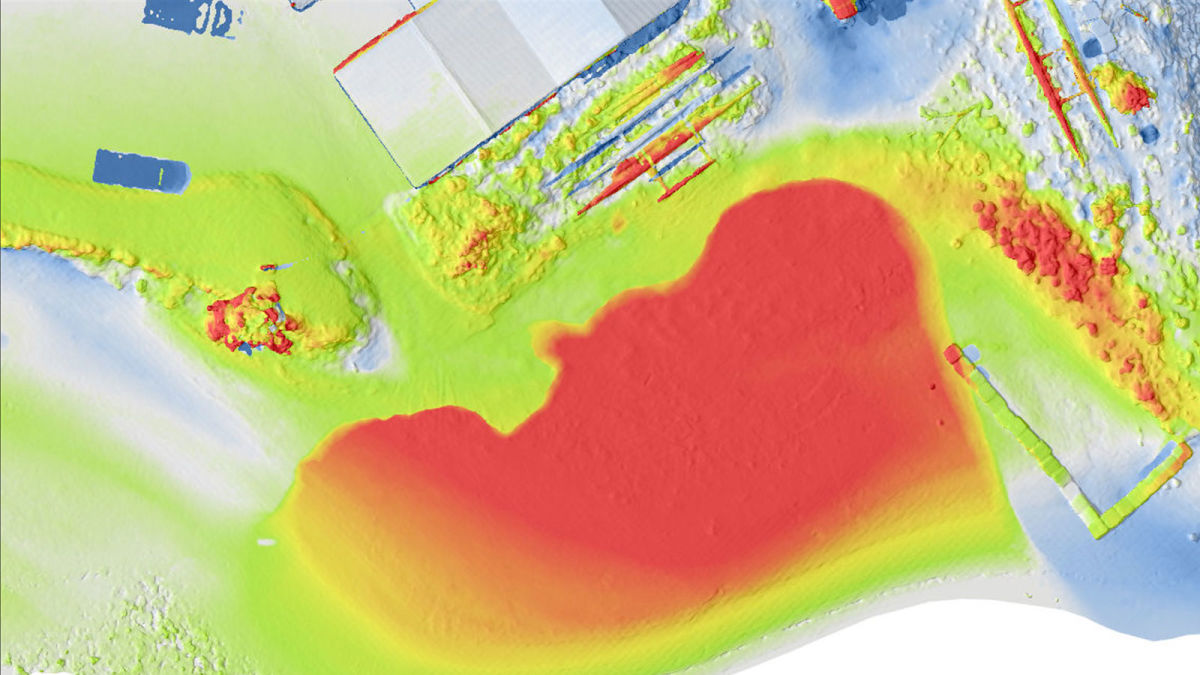 Geologists at work: surveying a landslide in New Zealand

December 2, 2021
A marine landslide in 2017 made a beach disappear. Ever since, a team has analyzed the site and recorded changes using PIX4Dmapper.

New Zealand is the ultimate bucket-list country to visit for many of us. It has abundant natural beauty, famous film sets, and rare animals to see. The geology of the country is even more exciting, as the island nation sits atop the recently discovered Zealandia continent, and on the edge of the Ring of Fire, a region of high tectonic activity. For professionals involved in surveying and geology, it means the region is constantly changing and there are lots of opportunities to research what has happened and get clues into the inner and deeper workings of our planet.

One such professional surveying team is a group from GNS Science, a New Zealand Government Crown Research Institute that is the leading provider of geological and geoscience research, with 390 staff spread across both the North and South Islands. The surveying team from GNS Science monitor landslides, map active faults, and create 2D and 3D geological maps in New Zealand to help understand the hazards during earthquakes or landslide inducing storms. They frequently use remotely piloted aircraft or UAVs to map and analyze geomorphology and geological outcrops. All of this brings us to their current ongoing project: the prolonged mapping of a 100 meter coastal landslide. An area of about 100 meters along the coast near Porirua (close to Wellington) that slipped into the sea in August 2017. Overnight, the entire beach seemed to disappear. The event was caused by a series of natural events weakening sediments, including an earthquake 9 months before. The GNS Science team has been returning to the site since the event to routinely map it in order to analyze what has happened since then and track the movement of the land in the aftermath. Working with drones gives them a full picture of the marine and coastal area with relative ease and great accuracy.

Due to the repeated surveying of this site over several years, the GNS Science team now has a successful drone mapping workflow. However, they have had to face some unusual challenges alongside the typical ones associated with drone surveying. They have completed 11 surveys since 2017, capturing 13,737 images of the site. They process their data in PIX4Dmapper in order to get orthomosaics and Digital Surface Models amongst other outputs which they can use for analysis and comparison over time.

The GNS Science team uses PIX4Dcapture to gather images, collecting roughly 350 images per flight in 3D mode. They also take nadir images and fly a video of the site just in case the photographs don’t come out as desired and they need to extract frames for 3D modeling. When they first came to the landslide area, they used a Mavic Pro, but have upgraded aircraft over the years to a Phantom Pro V2, and now a Mavic 2 Pro. They work with small rotary drones because of how easy they are to operate close to the ground or around steep terrain and transport to-and-from sites. Geologists and volcanologists studying in Hawaii echoed this expertise in their work mapping magma from the Kilauea volcano. However, getting the right weather for surveying in this coastal use case is difficult due to it being a shoreside region with strong winds and changeable weather. As if the weather was not enough of an obstacle to surveying, the team needed to have accurate geolocational data to have useful results. As this is a geological survey, it is being analyzed in precise detail. This is difficult to do if the coordinates of points are incorrect. However, the Ground Control Points (GCPs) that the GNS Science team initially used and thought would be permanent have moved! Some of them have been covered by sand (such as concrete blocks for storm protection) or destroyed (due to nearby road repairs). The land is constantly moving which makes it hard to get an accurate frame of reference. Now the team has integrated AeroPoints as ground control markers to get accurate surveying results. This is critically important as the data is being used to calculate elevation and volume changes at the site as part of official records. The team has to deal with everything from birds attacking the drone to people walking across the site mid-survey, making data collection a challenging endeavor. However, they are seasoned experts at drone surveying and have selected the right tools for the job. Once the photo data has been collected, they generate the models at the office. “We always know that once we are back in the office with the images, PIX4Dmapper will take care of everything else with ease”, says geologist Matt Hill of the GNS Science team. As PIX4Dmapper is a desktop product, the team can leave a project processing while they go out to survey another site, knowing they will be able to confidently analyze their results in 3D when ready. “The software has allowed us to repeat the same survey over several years to monitor the beach and provided information for scientific research about shallow marine landslides along this popular coastline and beach location,” Hill explains.

“The Pix4D software allowed us to rapidly and reliably deploy remotely piloted aircraft at the site. Within minutes of arriving, a flight plan was made with PIX4Dcapture and high-resolution orthophotographs and surface models could be generated in a few hours on our desktops for scientific analysis”. - Matt Hill, a geologist at GNS Science

As a result of repeatedly surveying the site, the GNS Science team now has accurate results and records of the shallow marine sediments for the area. These show how the beach has reformed remarkably fast thanks to deposits of wind-blown sand and longshore drift in the years since the landslide. They have historic aerial photographs of the area from as far back as 1944 that show how dynamic the site is. PIX4Dmapper produced their results within hours, providing surface models and orthophotographs which has been integrated into the GIS of GNS Science and the scientific analysis of the area. Repated surveys are easier than ever with the parameters saved in PIX4Dcapture and PIX4Dmapper, making the entire workflow more streamlined. As a result, GNS Science has completed extensive research in the area, and will continue to monitor changes as they investigate the geology of their region with PIX4Dmapper.