Calling a drone a drone: the etymology of an industry

January 8, 2019
Every industry has its own vocabulary and the geospatial industry is no exception. We explore the etymology of drone, nadir and more.

Surveyors are used to working with technology where you can see progress. Software developers release new features or fix a bug and the product evolves.

But what about the words in the sentence you’ve just read? Why do we call a drone a drone? In this article, we break down the etymology (the study of the development of words, from the Greek etymos, meaning “true” and logia, meaning “a study of”) of ten words we use a lot in the mapping industry. 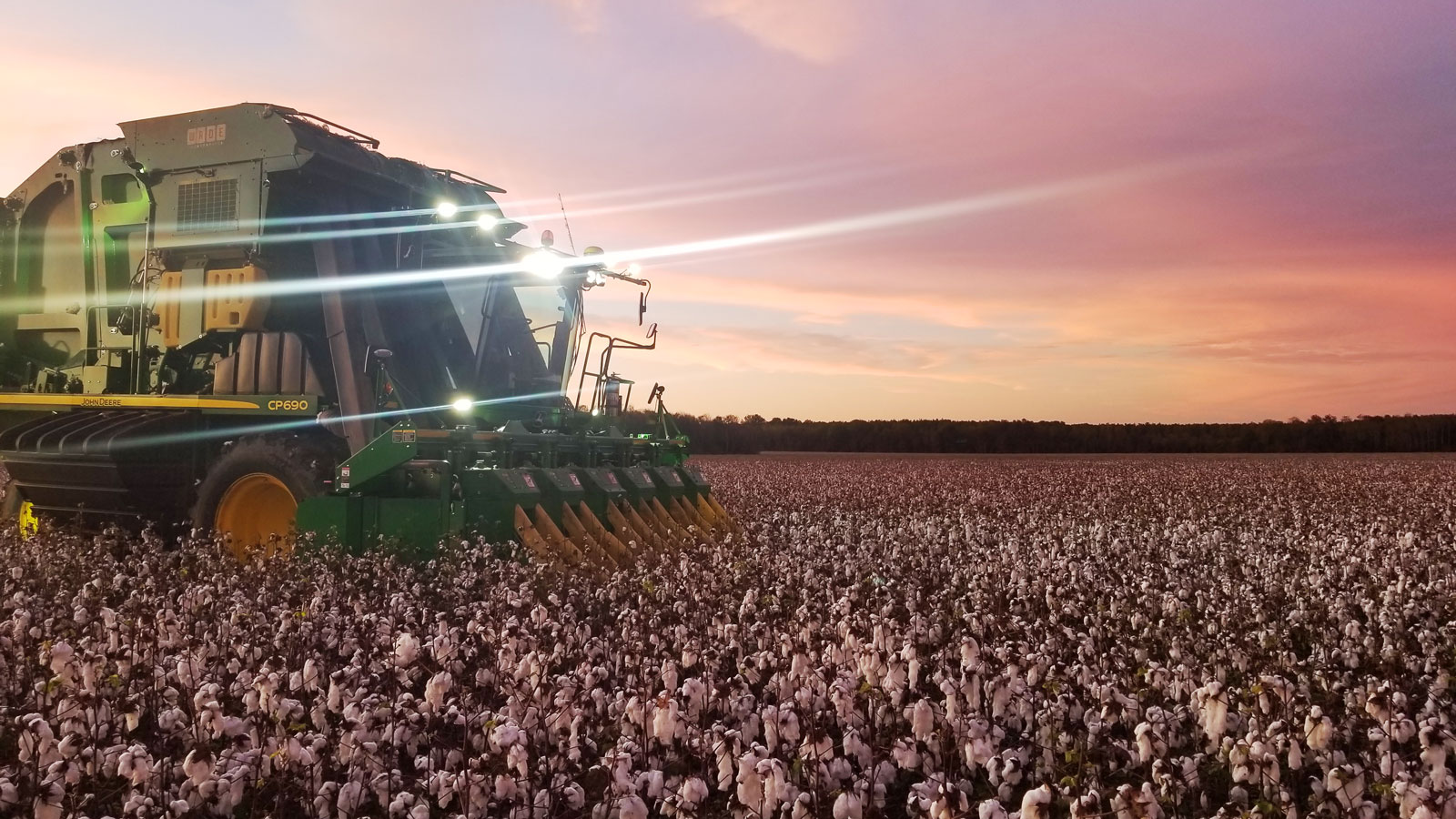 Agro is the sort of ancient term which excites etymologists. It’s a Proto-Indo-European root meaning "field" - which is probably already a derivative of the root ag, which means to “drive, draw out or move.”

It shares a link with the Sanskrit ajaras (meaning “plain” or “open country”) and the Greek agros (which you’ve already guessed means “field”, as does the Latin ager, the Old English æcer and the Gothic akrs) from where we derive the word acre.

The root ag has grown into words as diverse as acorn, peregrine and pilgrim.

We reach agronomy from the Greek agronomos, meaning “overseer of land.” Nomos meant "law or custom, administering." So the modern “science of soil management and crop production” comes from the ancient “law of the land.”

In Brazilian Portuguese, agrimensor doesn’t mean agronomist, but surveyor. The word is taken directly from the Latin: agrimensor also meant “surveyor” in Ancient Rome. Agrimensors were also called gromatici as they carried a groma or gruma, the precursor of a modern surveyor’s rod, strung with plumb lines to measure lines and angles and build an empire. Agrimensor is only used in Brazil: in Portugal the preferred term is topógrafo. Perhaps because (as we’ll see later), the term topography only began to be used well after Brazil was colonised.

The root of cartography is probably Egyptian, by way of Greece. Khartes means a "layer of papyrus." This morphed to carta in Medieval Latin, by which time it mean “paper, card or map.” In English we were using both carte and card for chart and map (although chart could also mean “playing card”) until the 17th century. Chart meaning “to enter on a map” was only used in 1837. 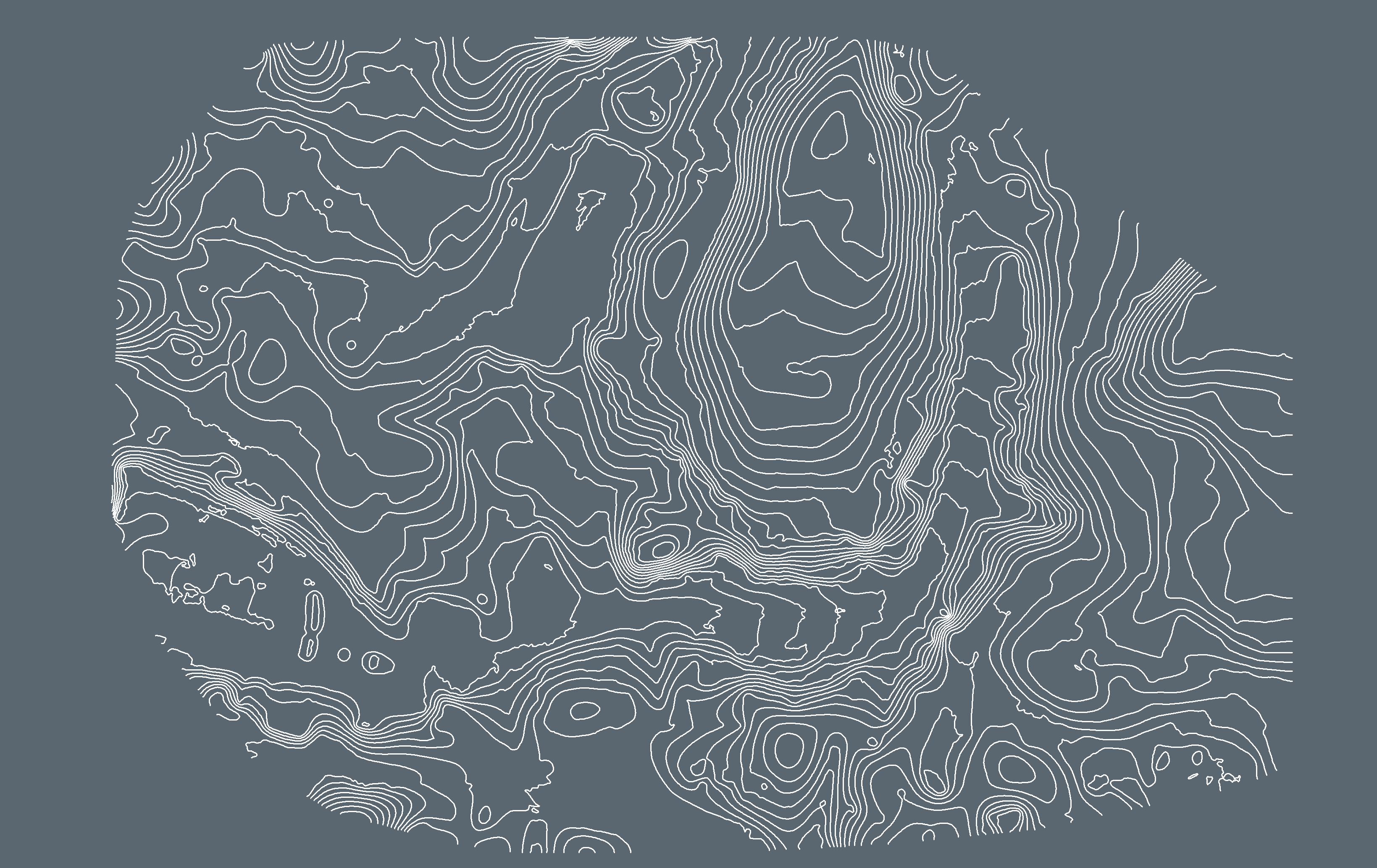 The contour is shown through the distances between lines; closer lines indicate a steeper gradient on the slope.

Before the 1700s, contour referred not to topography, but to blankets: it described a bedspread or quilt falling over the side of a mattress. The term was (and still is) also used to refer to the outline of a figure in art.

Contour gained its modern meaning in the 1700s - it makes an appearance in the colourfully named Essay on the Contour of the Coast of Norfolk; But More Particularly as it Relates to the Marum-banks & Sea-breaches. So Loudly and So Justly Complained Of! The pamphlet was read to the Society for the Participation of Useful Knowledge by M. J. Armstrong in 1789. Contour lines began to be used regularly around the same time. 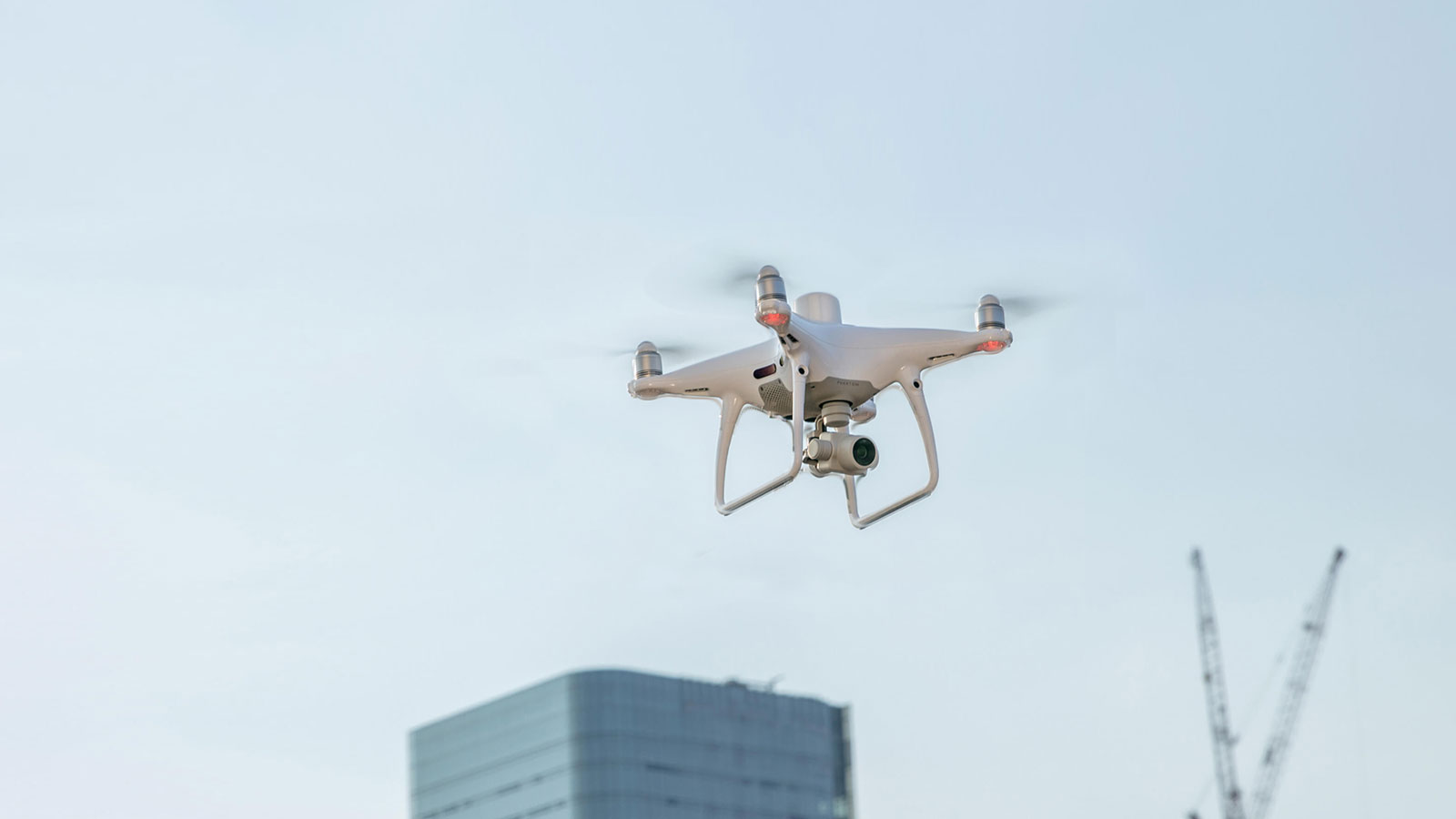 DJI Phantom 4 is one of the most used and well known drones for aerial mapping.

Before drone meant UAV, drones were male honeybees. The word is from the Old English dran or dræn. Like many English words, it has its roots in proto-German: dran.

Drone has been used as a term for UAVs since at least 1946, such as in this Popular Science magazine article:

“Drones, as the radio-controlled craft are called, have many potentialities, civilian and military. Some day huge mother ships may guide fleets of long-distance, cargo-carrying airplanes across continents and oceans. Long-range drones armed with atomic bombs could be flown by accompanying mother ships to their targets and in for perfect hits.”

But why name an aircraft after a bee? That decision was made in 1935, when the DH.82 Queen Bee took to the skies. This remote controlled aircraft was a variant of the Tiger Moth plane, which was common and also named after an insect. The leap from Queen Bee to drone is just an extension of the metaphor. The Merriam-Webster dictionary explains:

“Drones are bigger and heavier than worker bees, and they leave the hive and swarm in the fall. They are renowned for a sort of mindless, driven existence: they don't gather honey, they don't defend or maintain the hive, and their only purpose is to impregnate a queen bee.

“Using drone for the RPVs [Radio Piloted Vehicles] emphasized the fact that they had no mind of their own. And no doubt the buzzing flight of an RPV also reminded them of another flying buzzer.” 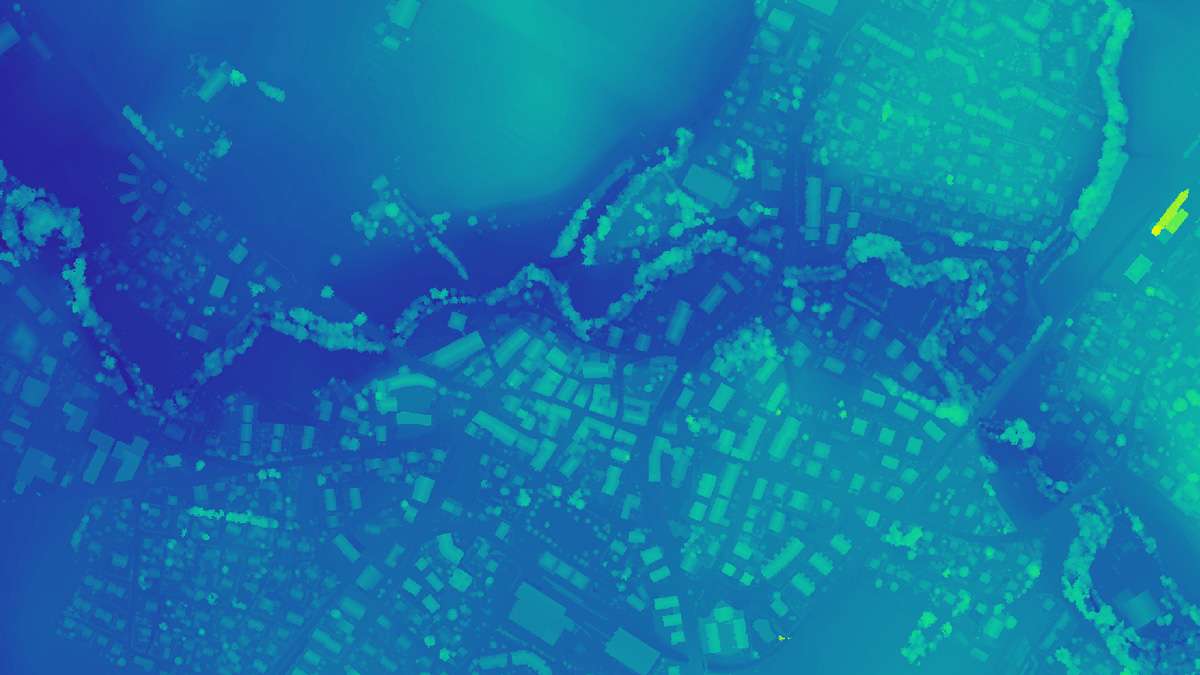 The monosyllabic map is a shortening of Middle English mapemounde meaning "map of the world". French speakers will recognise its roots in the Old French mapemonde, but its true roots are from the Medieval Latin mappa mundi (again, "map of the world").

Our ancestors are not so different from us - mappa is Latin for "napkin" or "cloth," and we still scratch maps on the back of a napkin today. 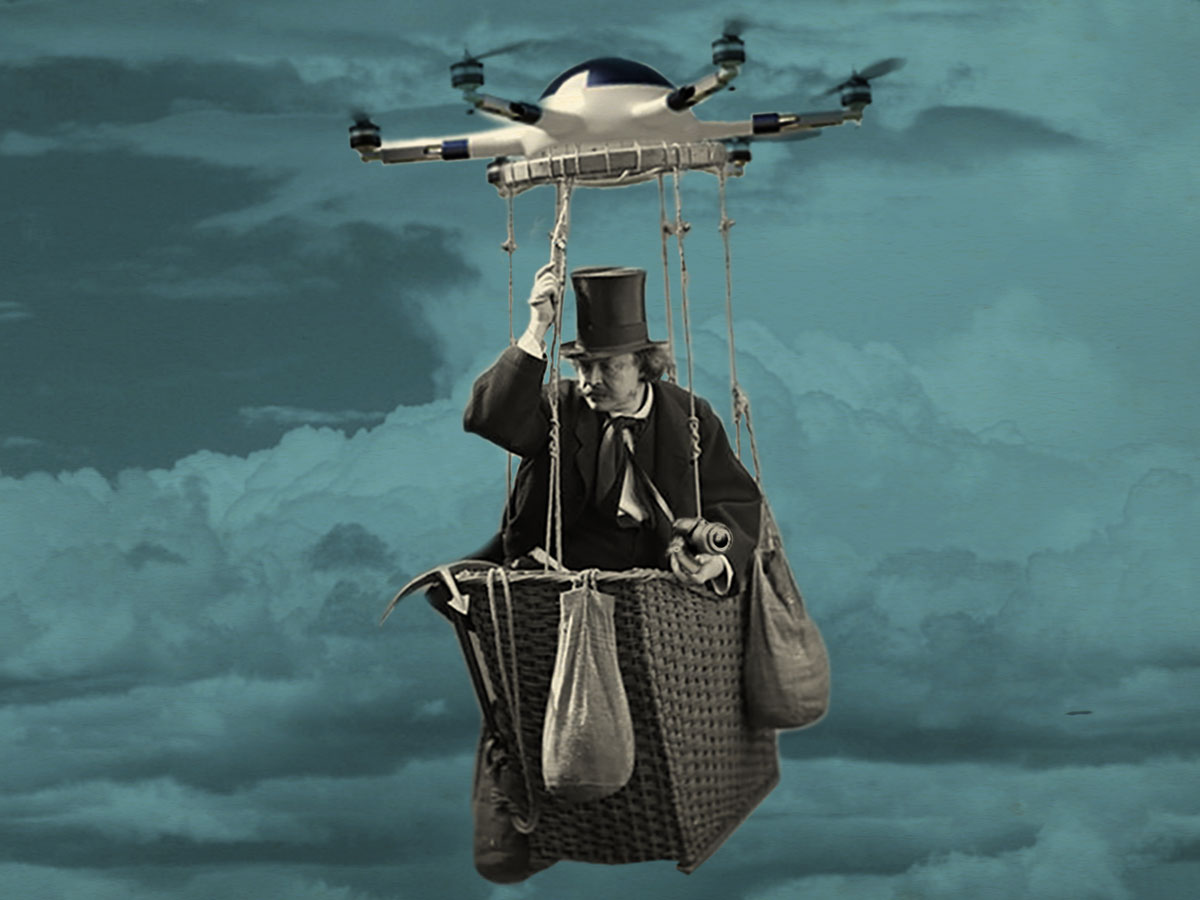 The first aerial photographer was Gaspar Felix Tournachon, who often used the pseudonym "Nadar". He was also a balloonist!

Nadir was taken from the Arabic nazir, meaning “opposite.” Unlike most of the words on this list, nadir hasn’t evolved past the Medieval Latin nadir.

Outside of photogrammetry, a nadir is a low point. We tend to think of a nadir as being above. This may be because of Nadar, the pseudonym of a French photographer famous for taking photographs from a balloon.

Nadar is also the name of a Pix4D-er’s dog.

And Pix4D-er? That’s an internal term used to mean “someone who works at Pix4D”. We took the name of the company and added the suffix er, which means “one who performs an action”.

Er is a collalessence of the Old English ere and the Proto-Germanic ari. It’s typically used with words of Germanic origins (like "boxer"). Words which originated from Latin (such as Pix, which in Latin is “pitch” as in “pine resin” - and in modern English a contraction of “pictures”) typically end in or - but there are many exceptions, and this is one of them.

Photogrammetry is only as old as modern photography. It is a portmanteau of three Greek words: photo (from photo meaning “light”), gram (from gramma "drawn”) and metry (from metria meaning "measuring”).

An early reference to photogrammetry was published in Transactions, the magazine of the American Geophysical Union by Earl Church. Simply titled Problems in Photogrammetry, it does not attempt to deal with “any specific problem or solution, but rather with the generalized subject of photogrammetry problems.” In this way, the magazine can be seen as a precursor to our Support site. 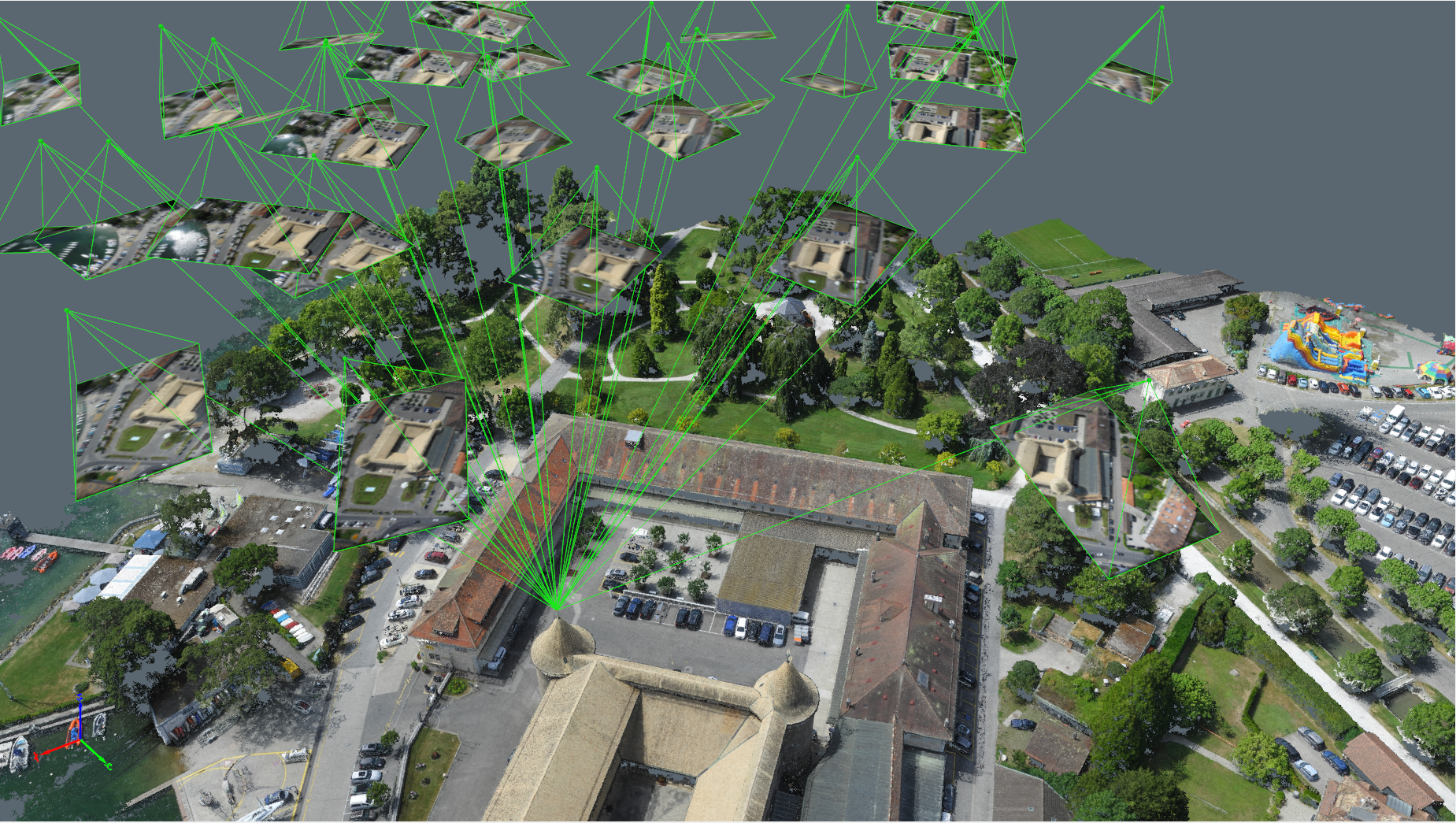 The rayCloud was invented in Pix4D to provide a seamless integration between a 3D representation of the project area and the original images. Inspired by the concept of a point cloud — a mass of 3D points in Cartesian coordinate system — we named our iconic interface rayCloud, which displays a mass of projection rays.

The 3D reconstruction is derived from the intersection of countless rays, each of which projects out into space from the original images, creating a cloud of rays. Click on a 3D point and you will see all of the images that contribute to the reconstruction of that specific point. Each image that captures the point will be tied to the point with a single ray. 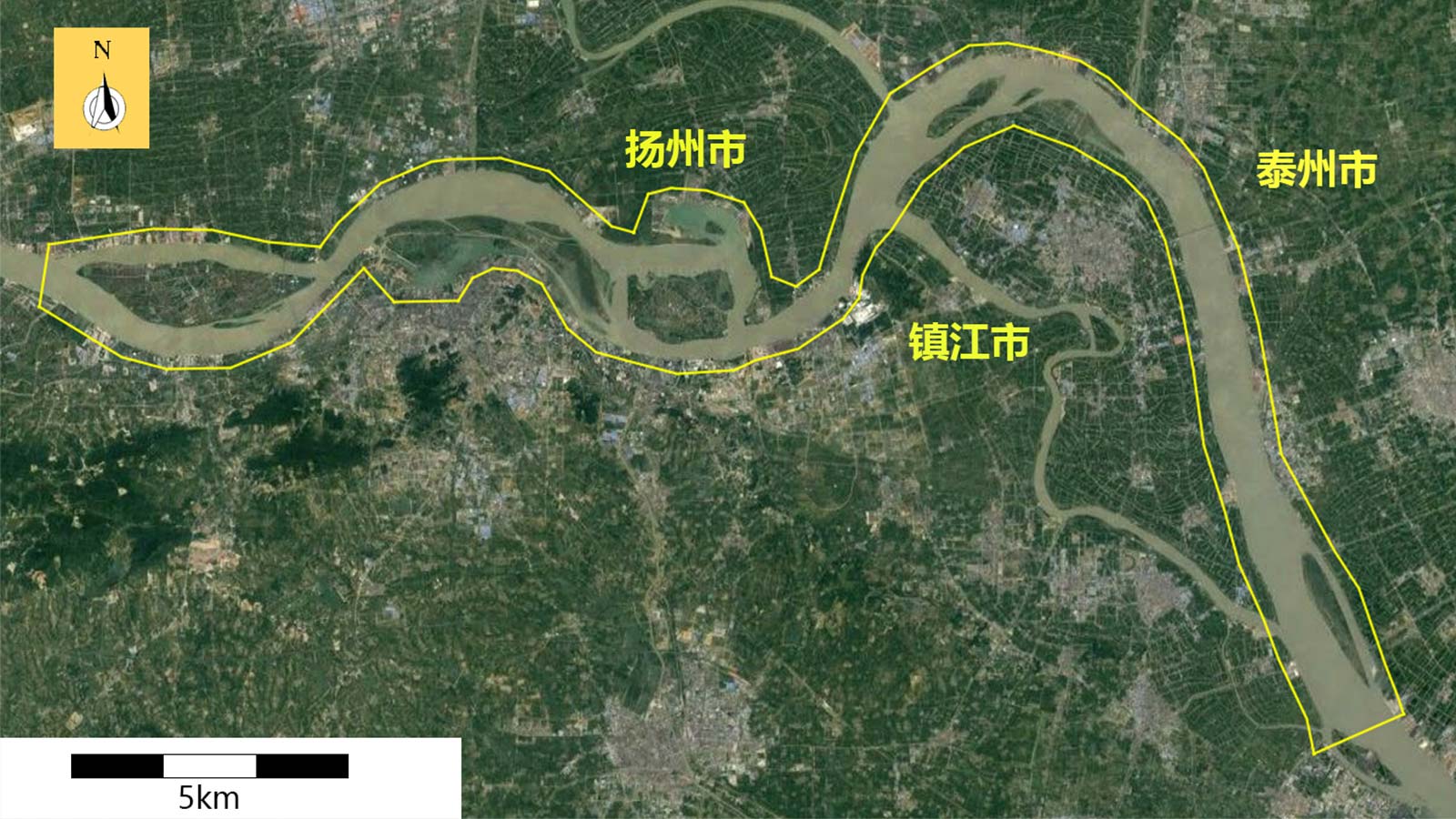 More than 400 km² of the Yangtze River in China were mapped with a ground sampling distance of just 8cm.

Survey has its roots in super. Super as a word-forming element is from Latin and means “above, beyond, over or on top of.” The word passed through Anglo-French as surveier, and speakers of Old French said sorveoir to mean "look at, notice or watch." In Medieval Latin it was supervidere "oversee, inspect" - the second half of the word, videre is "to see." Survey reached its modern meaning (although not its modern spelling) by the middle of the fifteenth century. 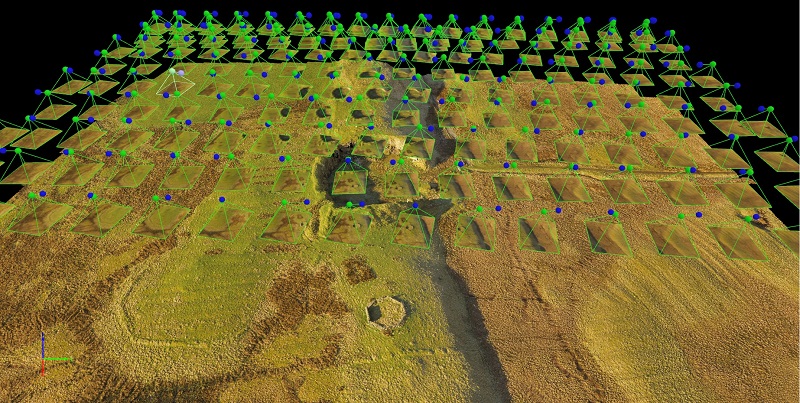 Drone topographic survey of a wind farm with a ground sampling distance of 2.6cm.

Topos from the Greek, means “place, region or space.” Graphy (or graphie in French and German, or graphia in Greek) means “to write or record.”

Its roots may be ancient, but topography been used to mean “the collective features of a region” only from the 1800s. During the war of 1812, the American army shook off the British term “ordnance surveys” in favour of maps made by the “Topographical Bureau of the Army.” Before the military took hold of the world, topography was writing about a place in a way we now think of as “local history.”

Photogrammetry is as old as photographs, and with Pix4D the industry is evolving more quickly than Nadir could have thought possible. With new words like rayCloud entering the lexicon faster than ever before, the landscape - and our language - will continue to evolve.