June 26, 2018
A smart city is a connected city. In a smart city, data and seemingly disparate pieces of information become aligned.

Instead of siloing vital data in different filing cabinets, computer systems, teams or buildings, seemingly disparate pieces of information are aligned, allowing policy makers to make better decisions to the benefit of all.

At least some of that investment will be in systems that gather data safely, quickly and accurately, such as drones.

Public agencies from North America to New Zealand are taking advantage of these small, but powerful devices to connect our world.

Located in the south-east corner of New Zealand’s North Island, the Tararua District is likely not the first location that comes to mind when talking ‘smart cities.’ The district’s constellation of tiny towns – total population of 17,800 – is spread over 4,300 km² of rugged farming and forestry land, slotted between the Ruahine mountain range and the Pacific Ocean. Despite its remote location and small population size, the Tararua District Council is a leader in Oceania in its use of drone-captured data to inform and engage its citizens.

The Tararua District Council is responsible for both the day-to-day management of services like trash and recycling, and bigger-picture planning such as emergency management, transportation systems, and water and wastewater. The Council has a long history of seeking ways to improve connections to its citizenry — largely because of its vast service area. The underpinning of that effort has been wireless connectivity, which facilitates all forms of current and future IoT possibilities. Already, district agencies use the wireless network to capture telemetry data about water supplies, sewer systems, roads, and bridges. 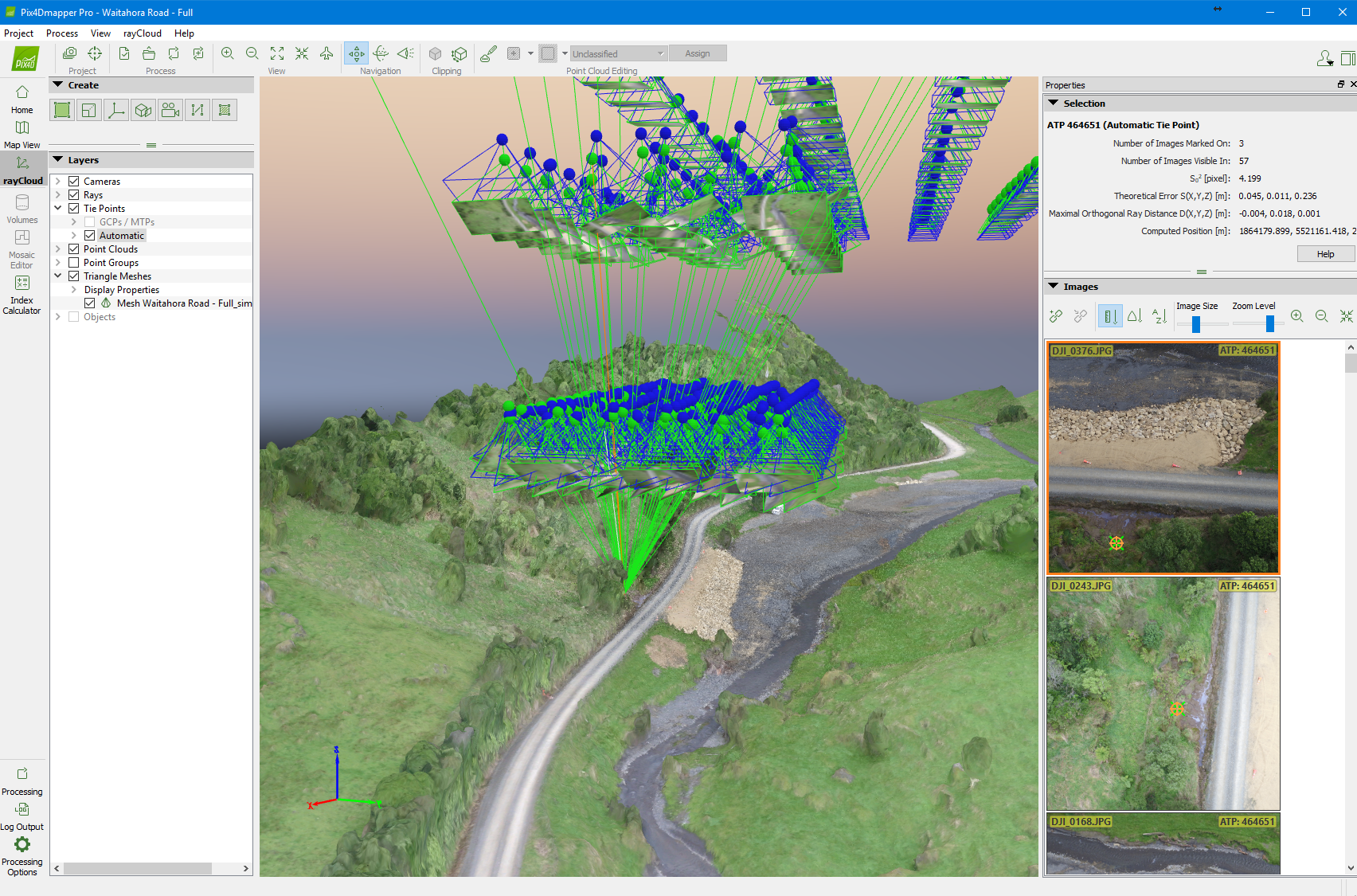 More recently, the Tararua District Council has been working with agencies to test and deploy drone-based mapping technology for a variety of applications. Aerial data is captured with drones and used to update the district-wide GIS, capture infrared photos for carbon model analysis, track construction project progress and for large bridge inspections.

Aerial imagery is used to update district-wide GIS
Blair Rogers, Master Business Systems’ GIS Consultant to the Tararua District Council, says, “The Council is very progressive. Their goal is to un-tie otherwise isolated data and make it available to the entire organization and, where possible, to the community. They see drones as the ideal vehicle to support all manner of services.”

Key in realizing the value of the drone-gathered data is the ability to easily and quickly develop and share images. That’s where Pix4Dmapper comes in. Rogers explains: “Pix4Dmapper lets us produce all manner of outputs from highly accurate orthomosaics to 3D models to traditional contour and terrains maps to name a few. Typically, we post-process with Pix4Dmapper, upload the data to online publishing platforms and share the data with the council, stakeholders and the community.”

The imagery is used to map areas of local historical interest (such as the Settler’s Cemetery, where townspeople were buried between the 1880s and the 1950s), and to create 3D models for publicity. More urgently, drones are used to capture images of slips on the district’s network of rural roads, and where streams have scoured their banks to threaten the streets, allowing transport issues to be resolved faster.

The power and potential of these systems for data capture is so high that the council has created a permanent drone operator position. This individual has the equipment, software and funding to acquire data whenever and wherever needed.

Rogers believes that it won’t be long before every engineer in the council district has a drone, adding, “Within a few years, maybe sooner, these devices will be another tool in the toolbox, as relevant as a telephone or total station.” 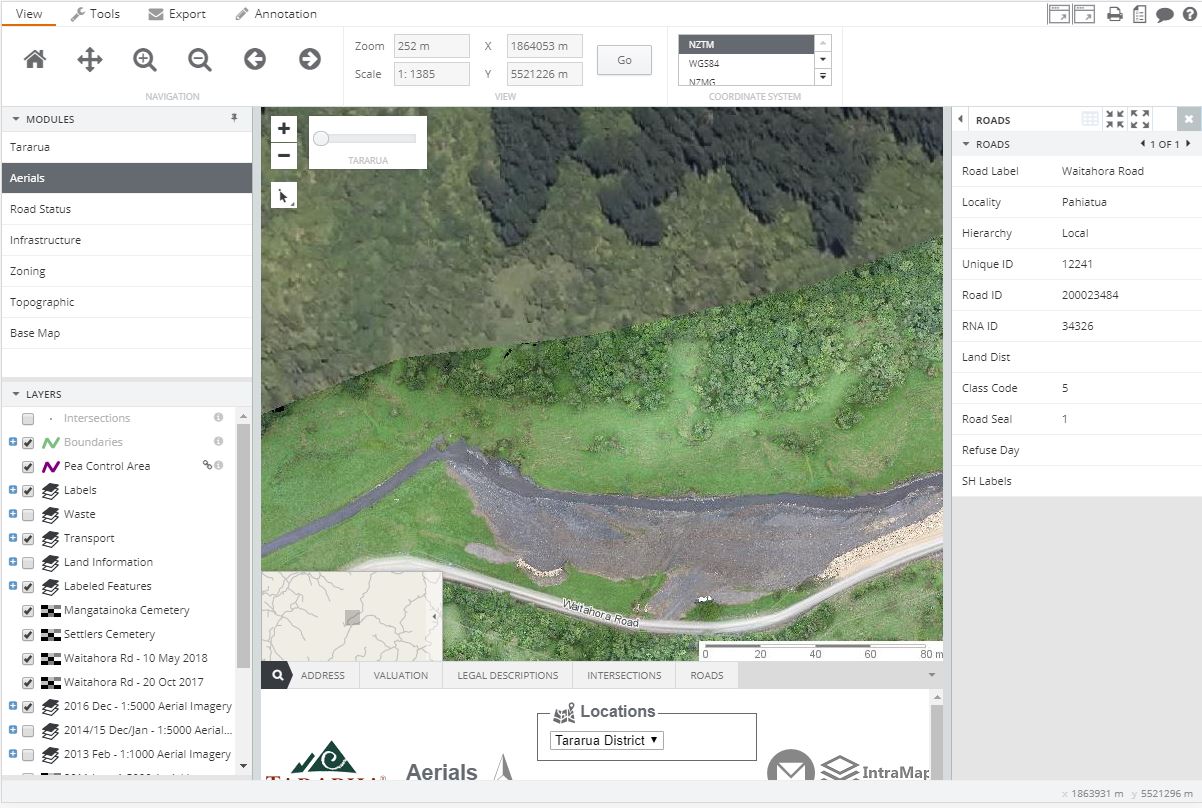 Mapping towns of all sizes

Across the U.S., cities and towns of all sizes are looking to improve connections with residents and business owners.

GEO Jobe UAV, a geospatial data provider based in Nashville, Tennessee, has a seat front-and-center of the smart cities evolution in the U.S. The firm provides high-resolution digital mapping products such as ortho-aerial maps, topographic data and models to public sector clients in local and county governments, as well as private sector clients in the engineering, construction, utilities and land surveying industries.

Jeff Lawrence, UAV Business Development for GEO Jobe, says, “As a service provider in the drone market, we’re seeing a whirlwind of interest from communities interested in using aerial data for a wide variety of applications from improving asset management to programming bus routes.”

Lawrence points to a project Geo Jobe recently completed for the owner of a resort community in Florida. The 9 km² property is essentially a small city with residential, commercial and recreational facilities such as golf courses along with almost a kilometer of beachfront. The client wanted a high-resolution map to better assess potential stormwater issues.

Combined with data gathered on the ground with handheld GPS units, the owner now has a comprehensive map of drains, manhole covers and the pipes that will be used to manage the infrastructure assets.

Now, that same owner is looking to compile other layers of GIS data like local zoning ordinances, mosquito spraying programs and working on community engagement applications. If there’s a flash flood or a backed-up storm drain, a resident could simply tap into the community app to report the incident. Or the property maintenance team can push out information such as the beginning of a flood mitigation program or areas impacted by a recent rain event to alert residents and business owners.

Lawrence adds, “The basemap becomes a two-way source of conversation and connection between the community public works team and residents and businesses.”

Still too small for a public works department, Tiptonville relies on engineering consultants and drones to support the operations and maintenance of sewer and water utilities. Looking ahead to opportunities to better understand, manage and upgrade their infrastructure, town leaders hired Geo Jobe to develop a high-resolution ortho map of the town’s water utility infrastructure. 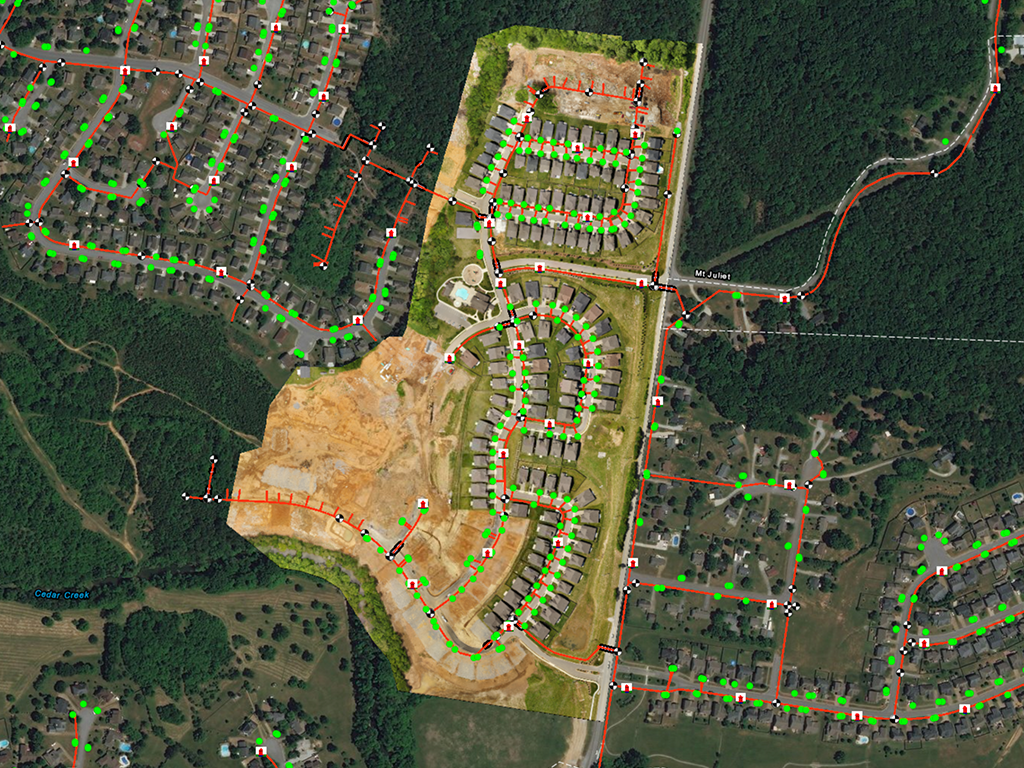 Geo Job’s Lawrence believes the ability to quickly and affordably develop a micro-GIS is one of the greatest advantages of drone technology for smaller municipalities. He adds, “Before drones and high quality microsensors, Tiptonville would have had to hire a plane to develop a topographic map—and they would have been lucky to get two foot (60cm) contours, for a much higher cost and then it would have taken several months to produce.”

Geo Jobe was able to develop the topo map of the town with 30cm contours in a couple hours, post-process the data within Pix4Dmapper and deliver the ortho image within a week.

Lawrence concludes, “Mapping with drone-based sensors and flexible, fast post-processing tools is an affordable way to create basemaps and build a GIS for a fraction of what it used to cost. For small towns like Tiptonville, it doesn’t make sense to fly a plane. Drones can do it faster, cheaper and more accurately —thereby opening the door to smart city initiatives in communities of all sizes.”

A city doesn’t have to be big to be smart. What matters is the technology driving the change. With Pix4D, mapping has never been more flexible, affordable or accessible. Small cities like Tiptonville and the Tararua District are leading the way with agile and inventive uses of the new technology, proving that no matter what the size of the town, it can be smart.