Overwater mapping: the case of the disappearing kelp

June 1, 2020
In less than a decade, 90% of California's kelp forests have disappeared. One team is mapping what’s left to figure out what to do next.

“If someone took out all the redwoods in California, then people would notice,” says Waz Hewerdine. “But because the kelp forests are mostly out of sight, a lot of people aren’t really aware of the extent of the problem.”

Hewerdine, a ‘citizen scientist,’ is working with a joint program of two non-profit organisations: The Nature Conservancy and The Greater Farallones Association.

The joint program aims to support kelp recovery: a process which has to start with mapping the kelp. 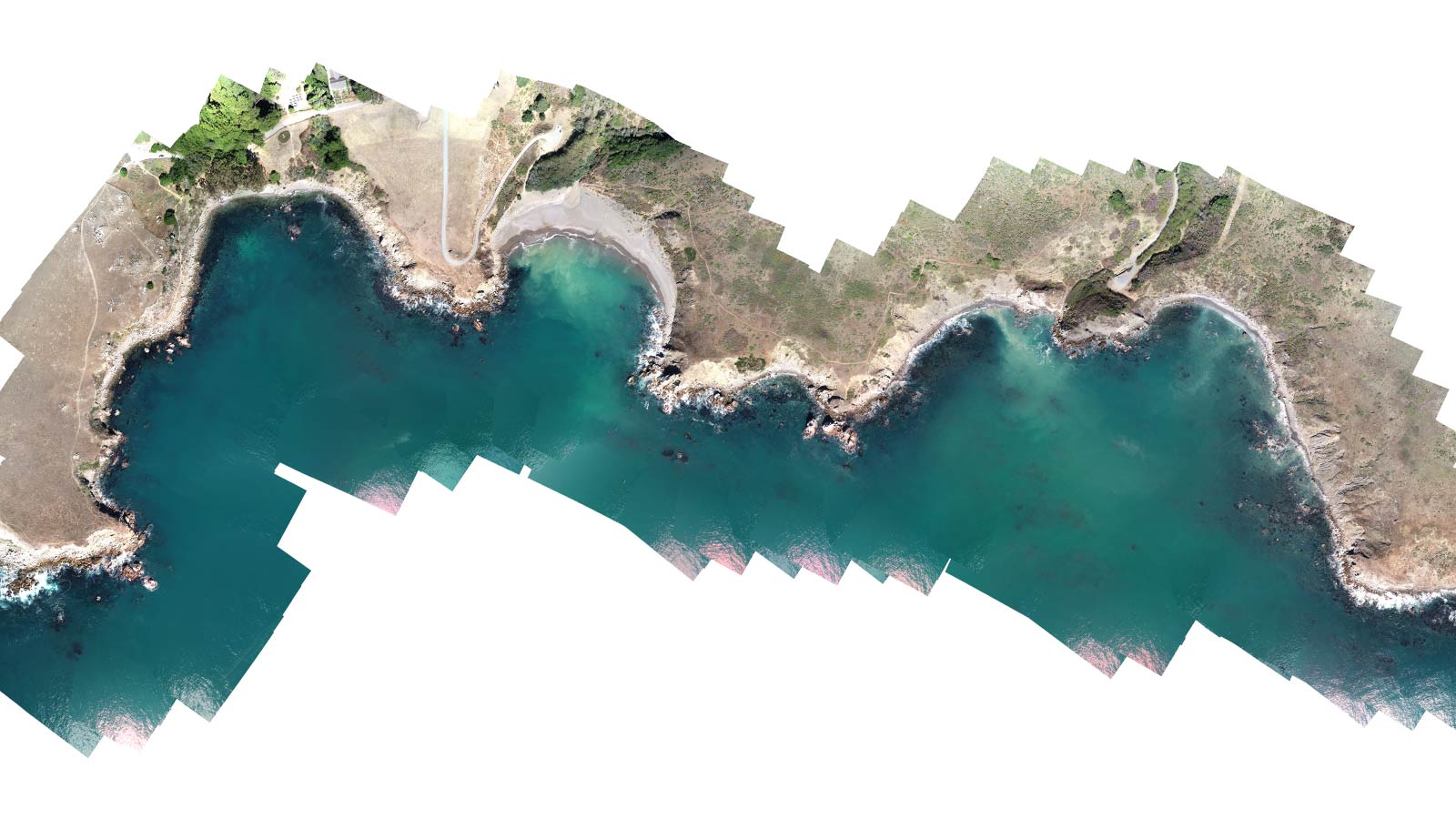 The ocean in this image should be dark with kelp
This project was the third-place winner in the 2019 Pix4D Climate Contest. Read more about the contest.

“It’s vital to map and measure the kelp presence for three main reasons,” says Hewerdine. “One is to understand the extent of the problem. The second reason is to be able to communicate the severity of the issue. And last but not least, to understand the effectiveness of any recovery program put in place. That’s why we’re using drones as a cost-effective solution for the mapping and monitoring the kelp canopy.”

Kelp: a forest under the ocean

“Kelp beds are the rainforest of the ocean,” says Hewerdine.

Found in cool, nutrient-rich waters, kelp forests are some of the most diverse ecosystems in the world, providing a habitat for otters, fish, and shellfish. They can act as a ‘nursery’ for other creatures, including sharks.

Kelp forests are essential for land-dwellers too: marine plants produce about half of all oxygen on earth.¹ But the massive kelp forests along the Californian coast have been dying off.

A marine heat wave in 2014 led to a population explosion of purple sea urchins.² Kelp can grow as much as half a meter a day, but purple sea urchins not only eat the kelp, but scrape the ocean floor clean, making it impossible for new forests to take root.

“It’s estimated that about 90% of California’s bull kelp forests have been completely wiped out over the last few years,” says Hewerdine. “This will drastically impact the biodiversity of the Californian coastline for years to come.”

Project locations were identified based on a number of factors including accessibility, historical kelp data, and the area’s current use, whether that was recreation or commercial fisheries. The project was narrowed down to 20 sites, spread over some 200 miles of coast.

Before flying, the team secured permissions from landowners and residents. “We had to deal with a lot of different organisations,” says Hewerdine. “Half a dozen local and residential authorities, everything from state parks to marine reserves to private residential estates that forbid drones. There was no resistance - everyone saw the value in the project, but it’s like any other permitting process: it takes time.” 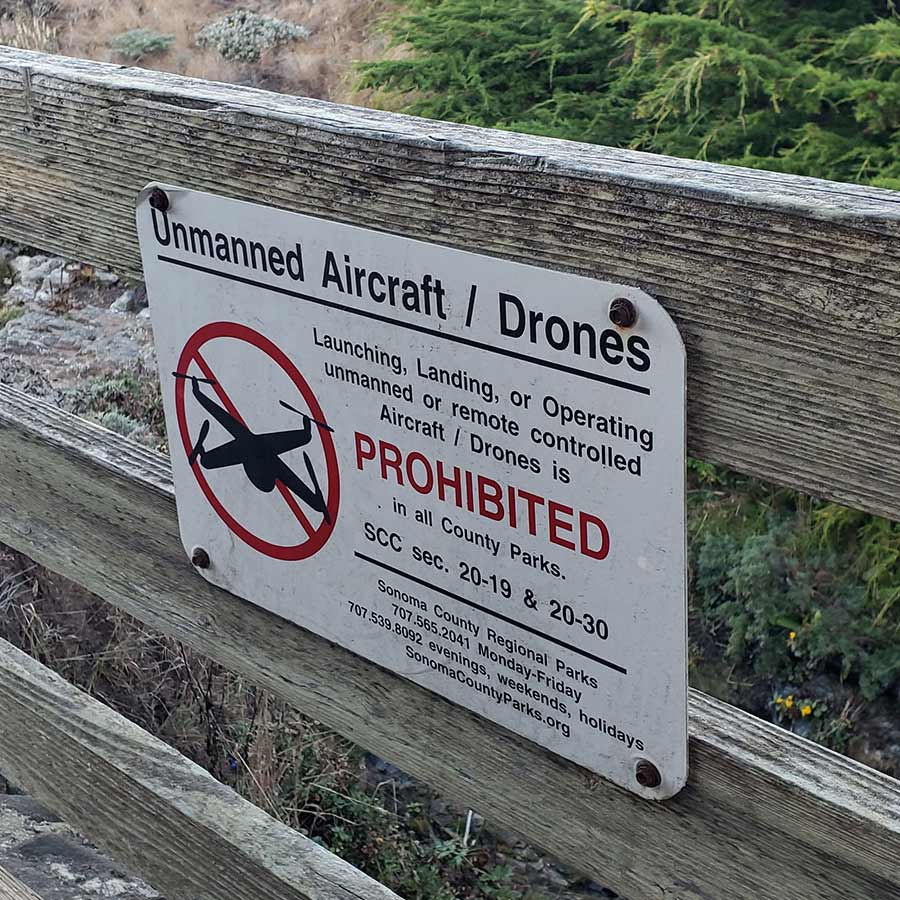 The team received permission to fly, even in areas forbidding drones

Paperwork completed, the next challenge was getting to the site.

“Accessibility is a bit of a challenge, logistically. It’s a very rugged coast and access is varied and sometimes sparse,” says Hewerdine. 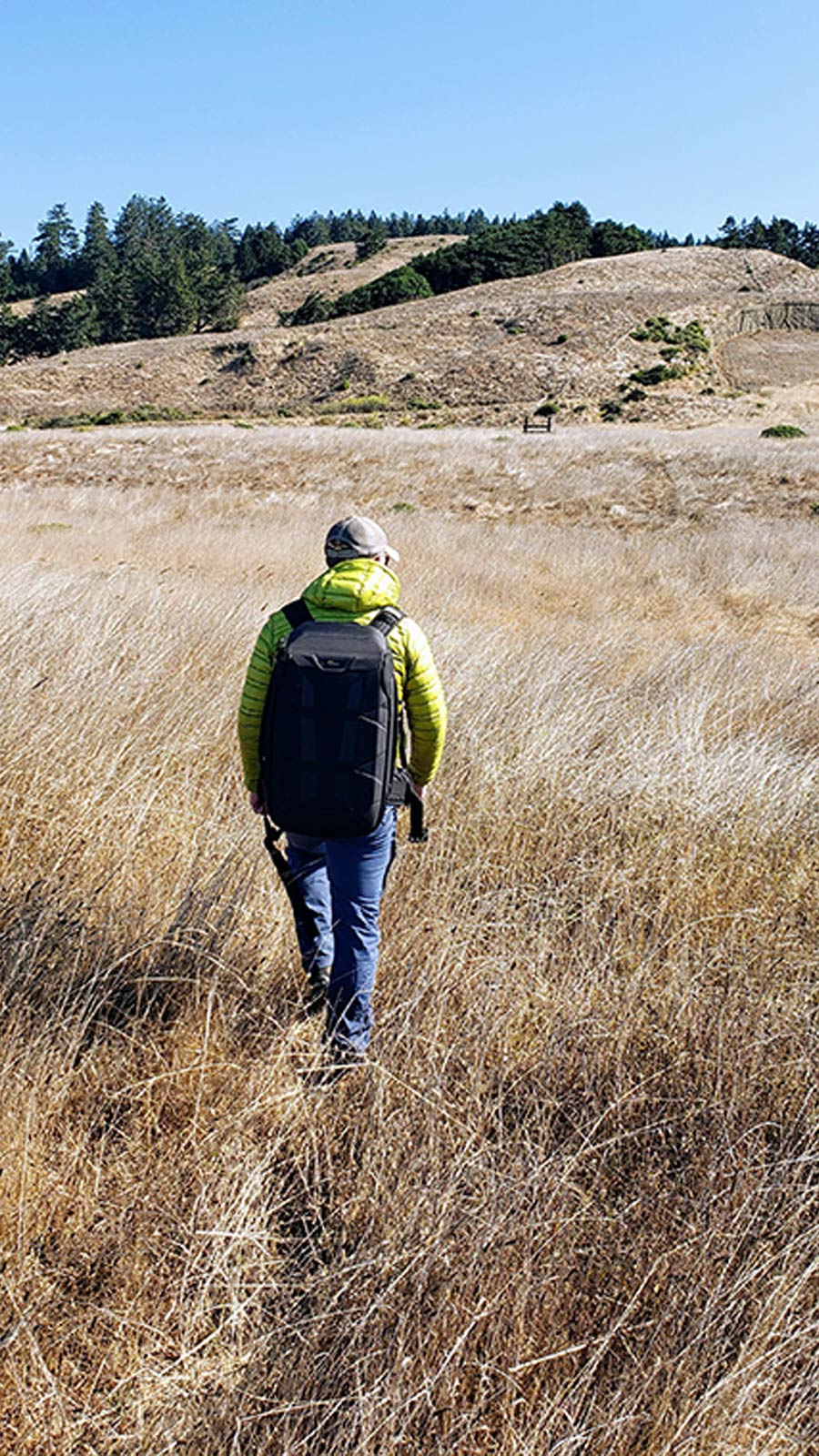 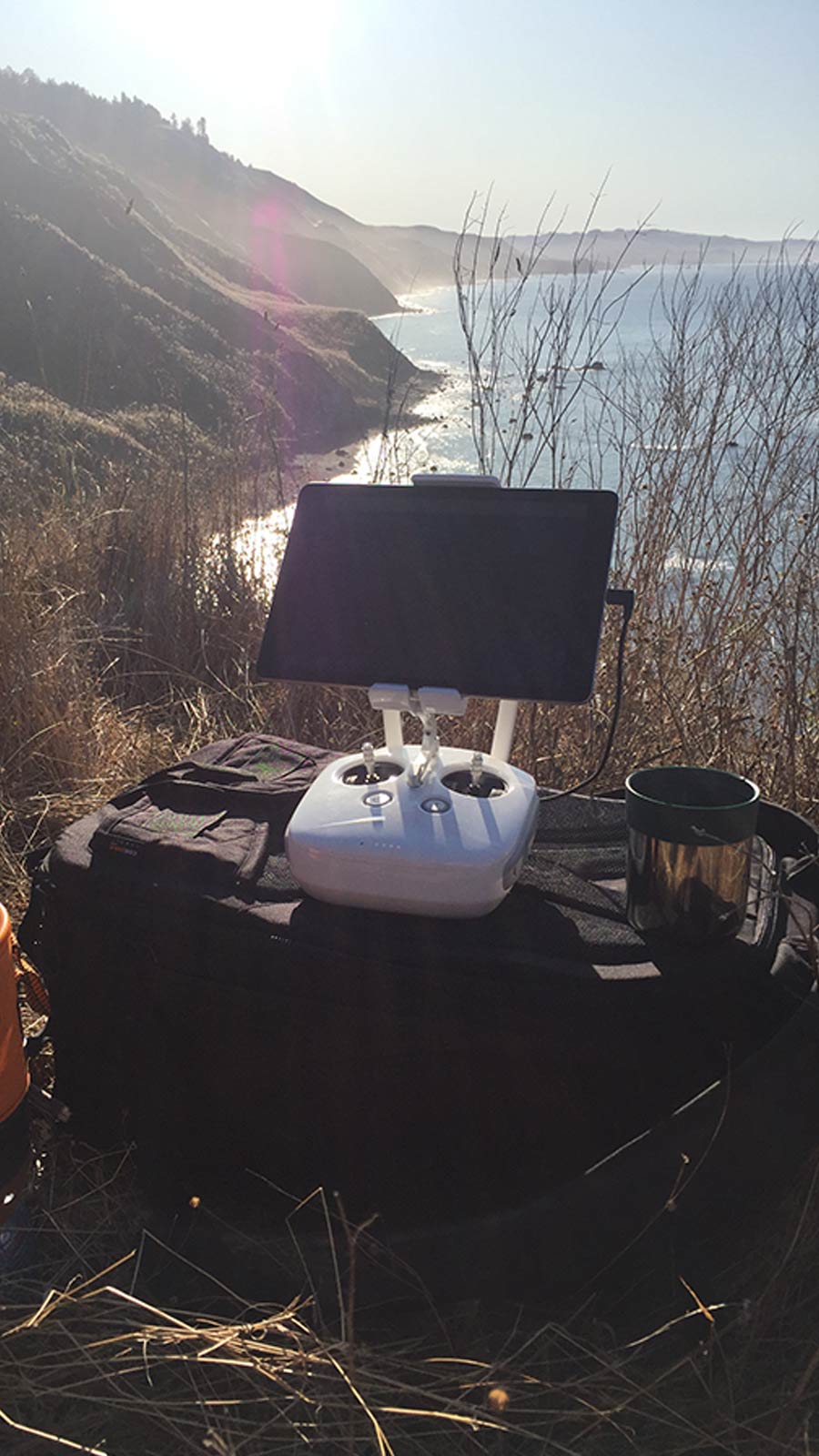 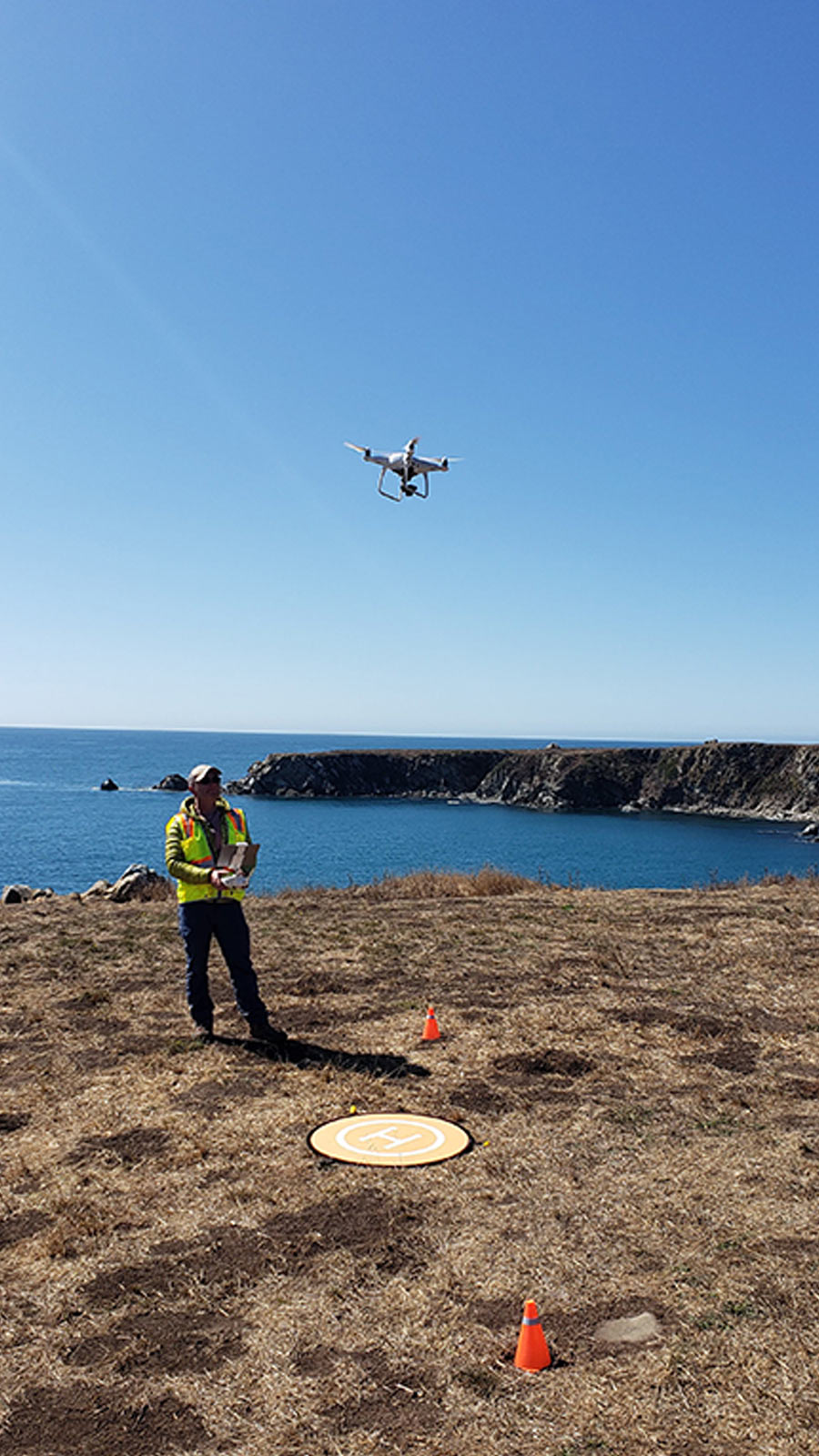 “Sometimes you could pull up in a car park and fly from there - just sit back in your chair and enjoy the ocean. But others we had to arrange to pick up the keys from local authorities and hike through paddocks on cliff tops to actually access the sites. It was a lot of early starts - getting up at 4am - because we wanted to avoid the midday sun glare and the afternoon winds which makes for less favourable flying conditions.” 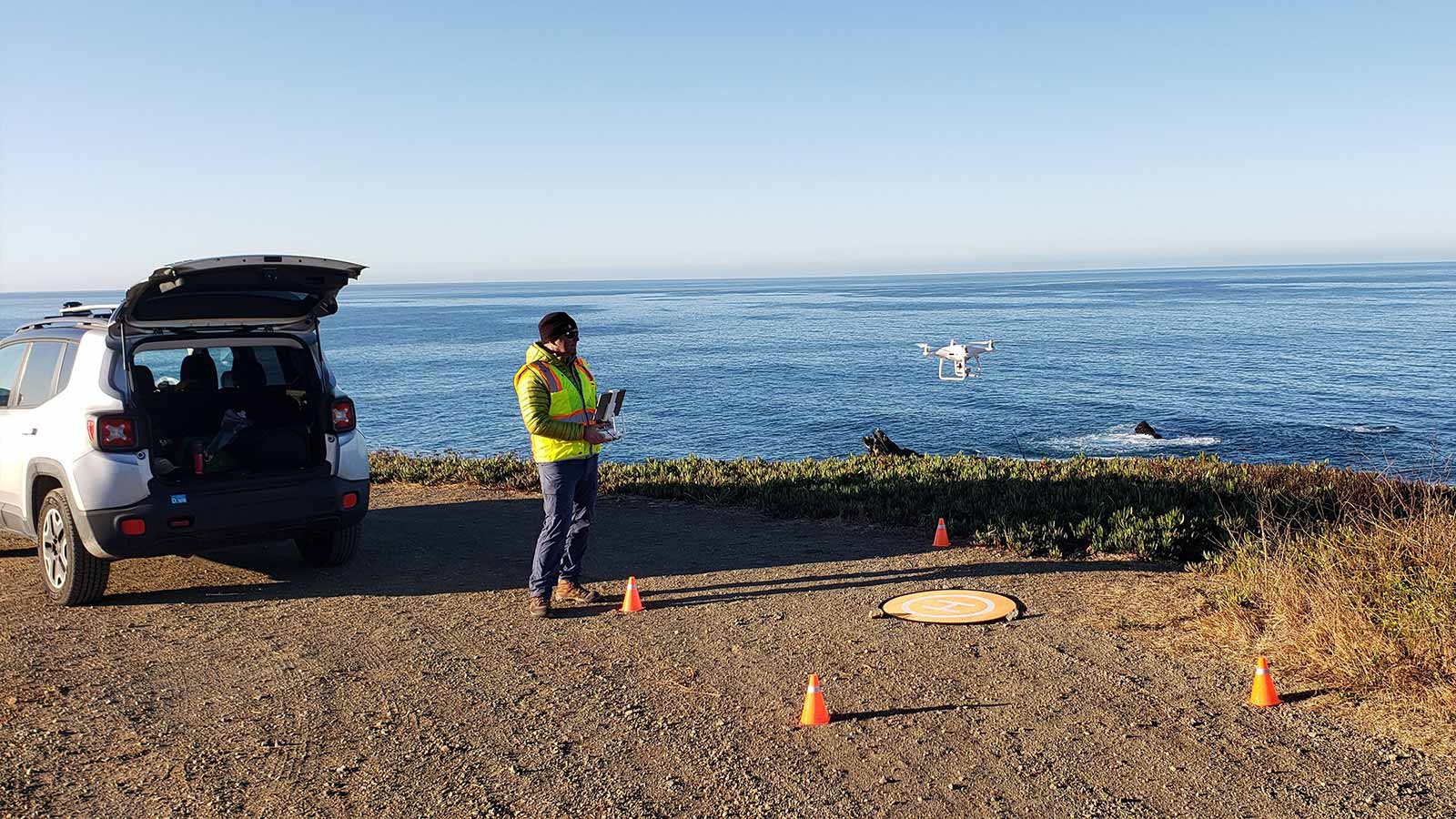 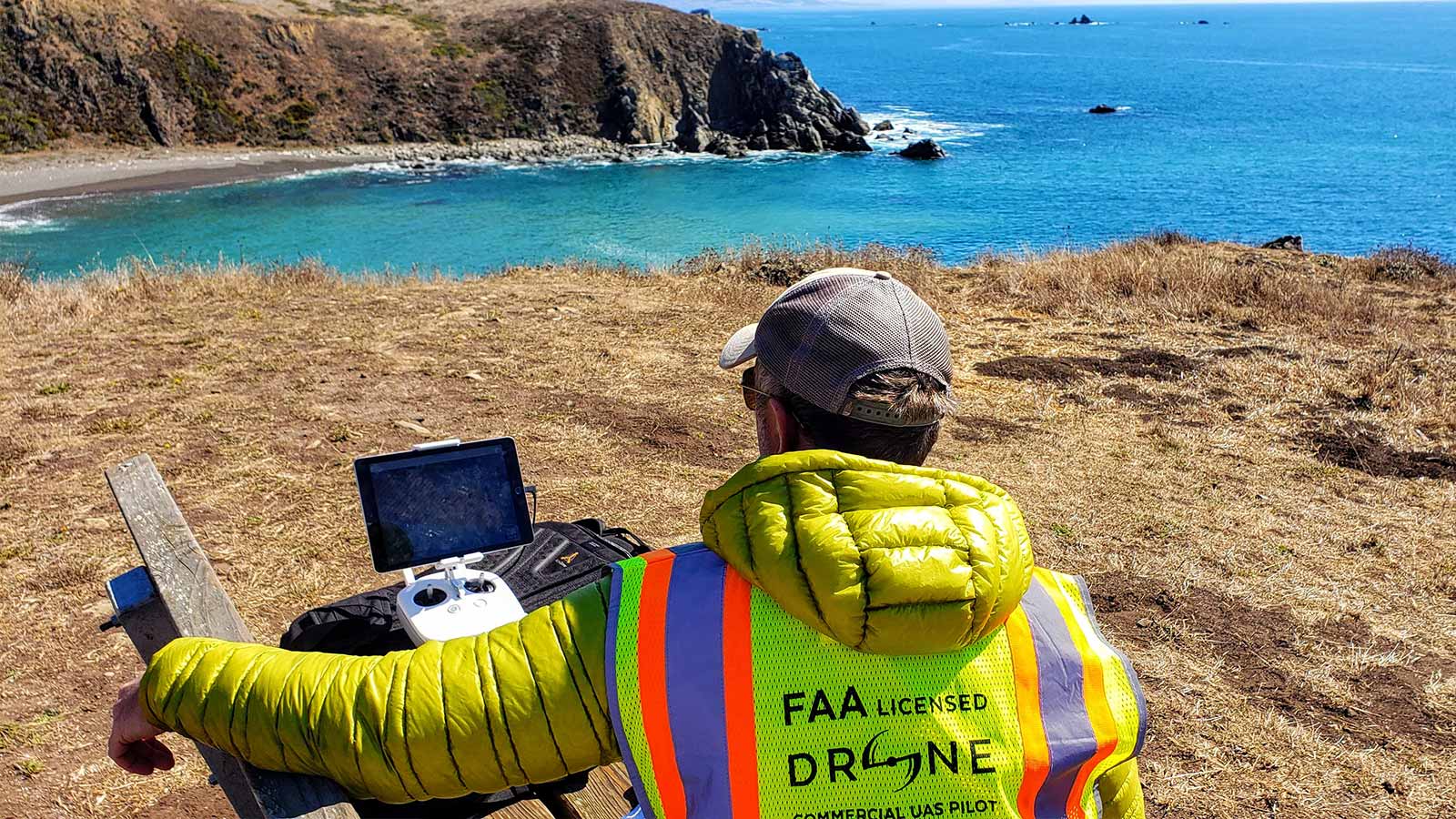 Flying over the ocean

Once on site, the team launched their Phantom 4 Pro drone. “A typical site would be half a kilometer out to sea,” says Hewerdine.

Water is very difficult to reconstruct using photogrammetry. That’s because Pix4D photogrammetry technology relies on locating the same point in multiple images. Water typically does not have identifying characteristics - and when objects are present, they’re not static.

However, the team had great results using Pix4Dreact.

“We experimented with a number of different programs to see how we could piece all of this together in the best possible way,” says Hewerdine. “Most photogrammetry programs really didn’t cut it, because of the constant motion and lack of unique features in the water - photogrammetry really does not like water. But we found that as long as there was some sort of unique feature out there - the kelp canopy in this case - Pix4Dreact did a very good job of creating an acceptable orthomosaic.” 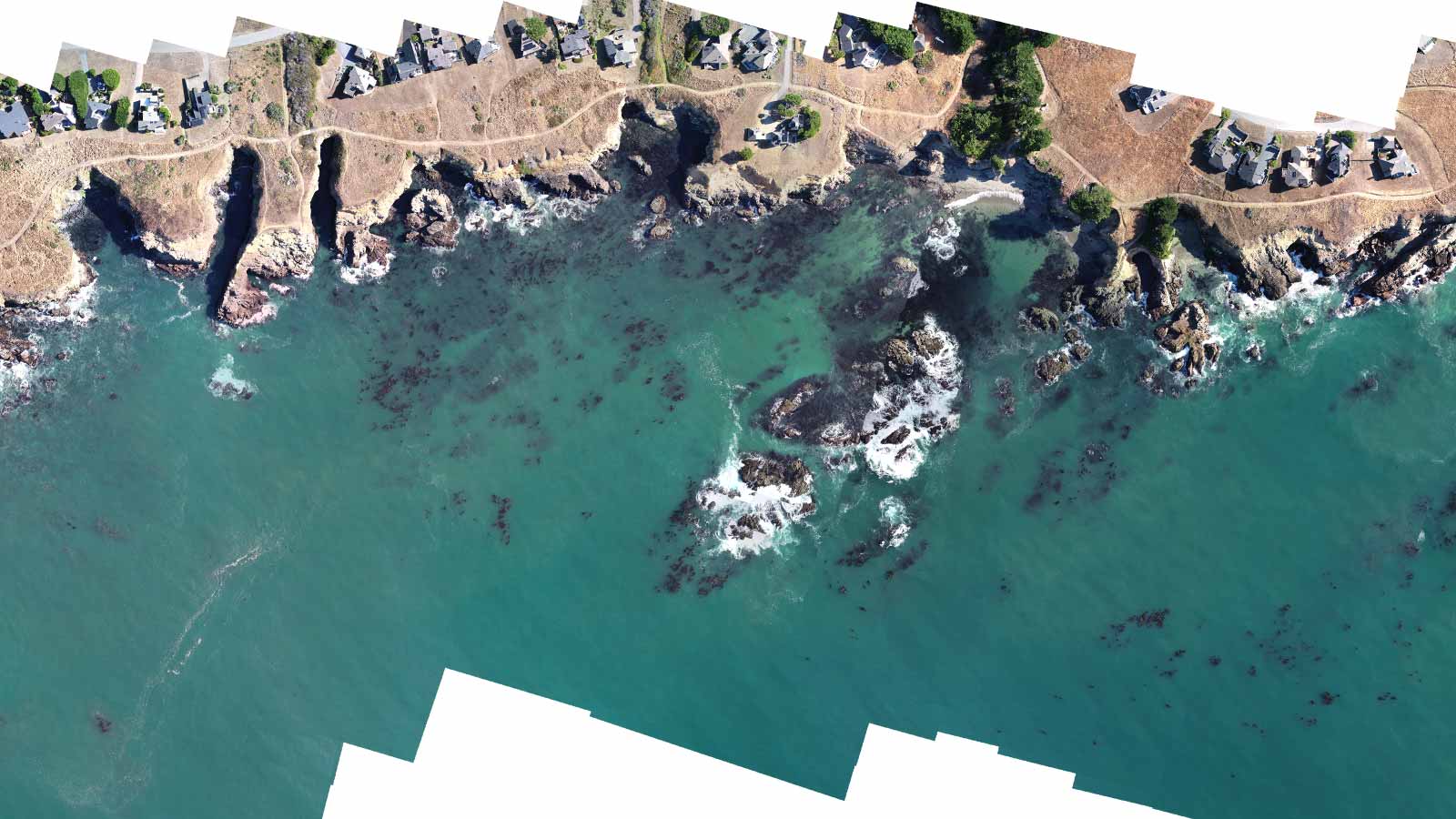 More than acceptable: kelp is clearly visible as dark spots in the orthomosaic

“It’s pretty clear that Pix4Dreact is the clear winner and generates the orthomosaic that is most accurate and in a timely manner,” says Hewerdine. But one issue facing the team is: “The computer I’m running it on was invented along with the wheel. I’m impressed given the specs of my computer that Pix4Dreact would run at all, let alone could process data. There was definitely a little bit of waiting, but I'll just set it up and leave it running, and it works fine.”

Hewerdine adds: “As long as we have something visible in the water like the kelp canopy, then it’s good. We’re in the process of validating that we’re not missing too much canopy, but at the moment, the results are looking extremely favourable.” 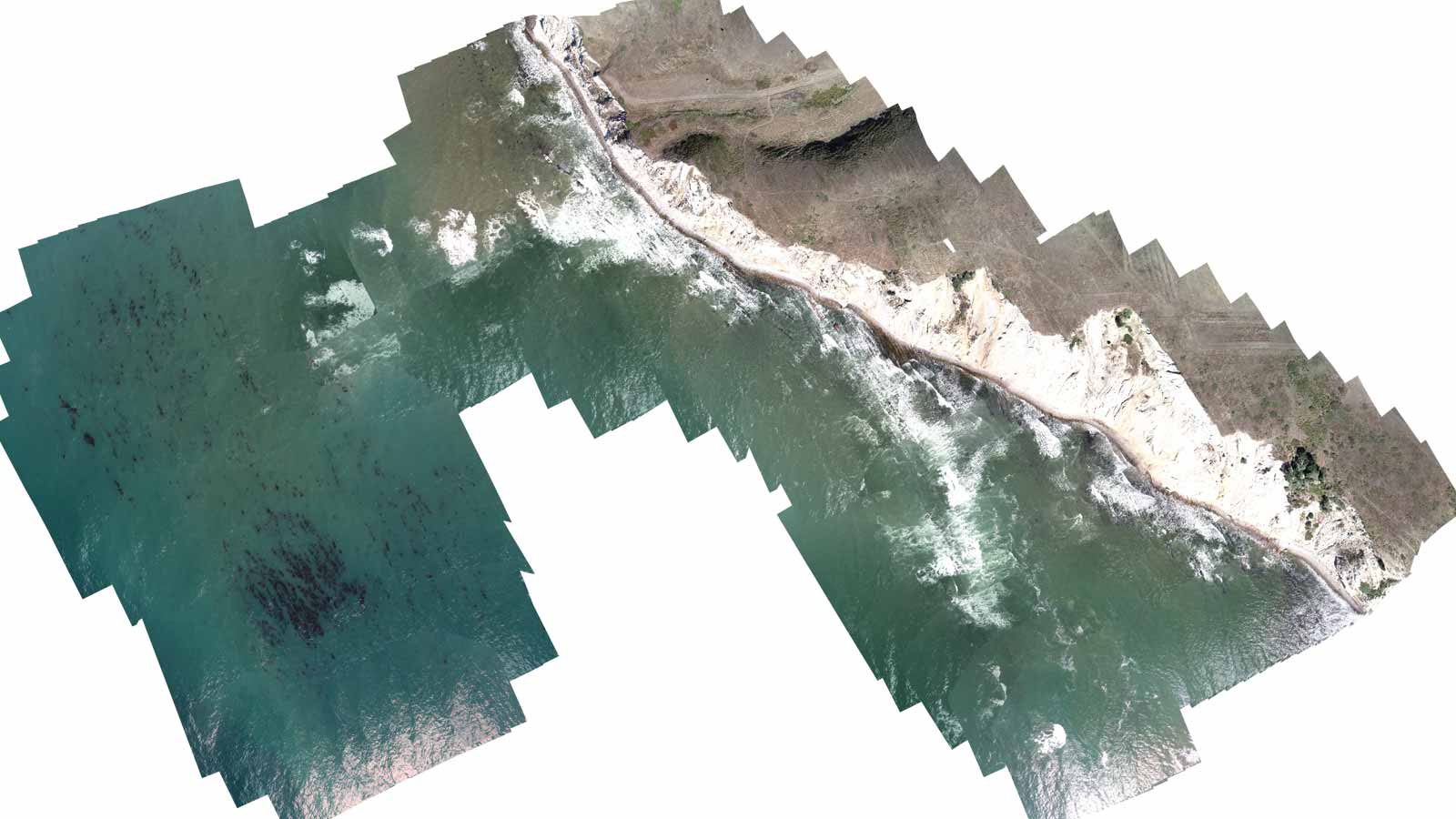 Some 'stitches' are noticeable, but the kelp is clearly visible

The first stage of the project was aimed at understanding the drone mapping workflow, and mapping the sites.

“Now we’re in the process of classification and canopy coverage calculations,” says Hewerdine. “We need to bring that data into a GIS package to classify the kelp itself, and ultimately be able to calculate kelp canopy coverage of those target sites.”

Pix4Dreact allows users to easily calculate area. In theory, a back-of-an-envelope calculation could extrapolate from the visible canopy to total biomass. But the team fears it won’t be easy to get accurate results.

“There are some programs which map giant kelp,” says Hewerdine, “But bull kelp is really different as it tends to live in more exposed locations. The surface fronds of the canopy isn’t as dense as giant kelp, and it grows in a lot more active water environments, which makes it challenging for any traditional photogrammetry process and technique.”

“The other thing is, the environment is very dynamic. Kelp itself is very quick growing, day to day it changes, and it’s also very seasonal. Plus tide heights affects the amount of canopy that is exposed on the surface.” 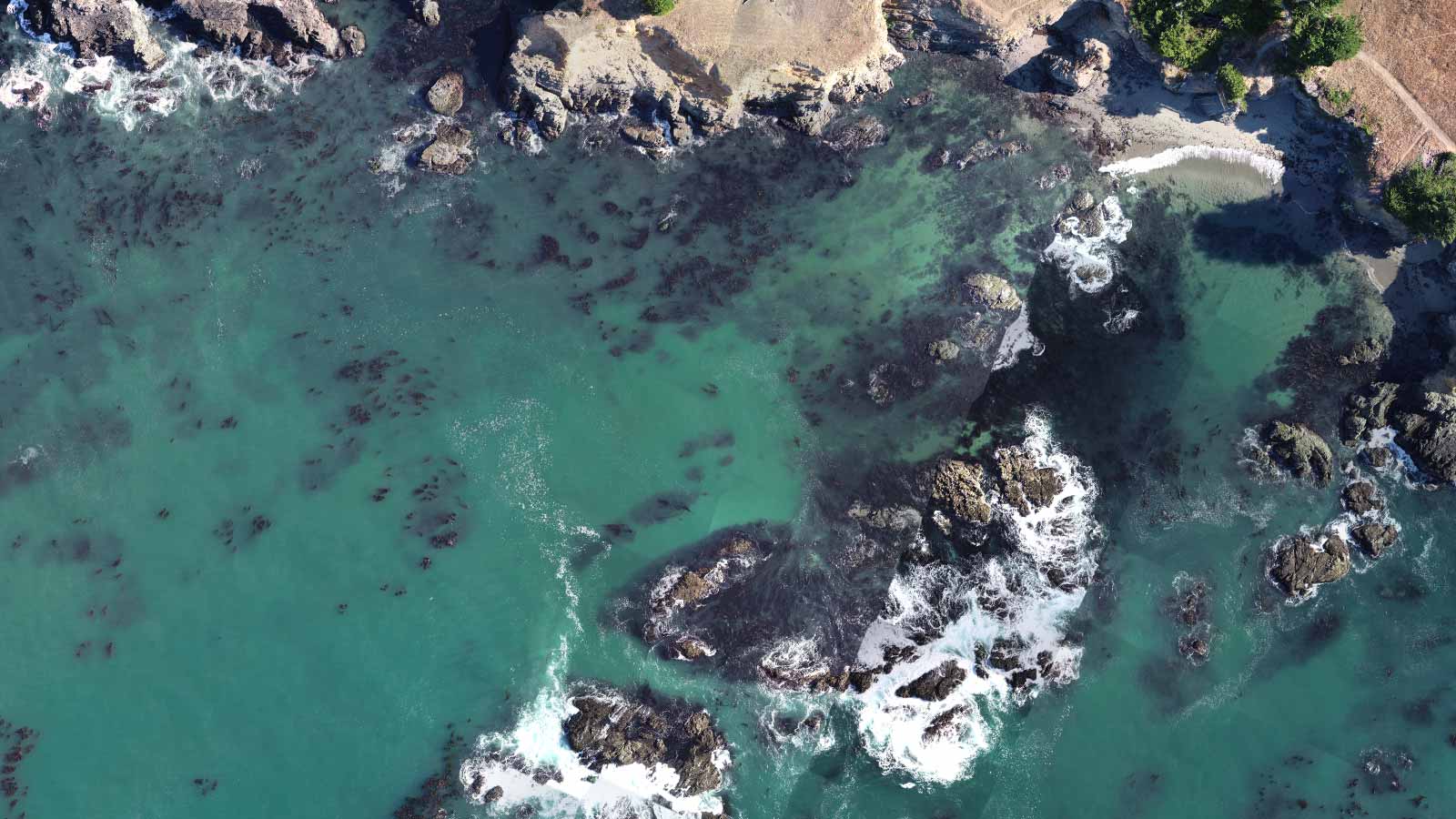 Tide levels affect how much kelp is visible

Beyond calculating the precise coverage, the primary objective is to measure the effectiveness of recovery efforts.

From “ranching” purple sea urchins to planting kelp spores, the team are ready to try a number of different approaches to regrow Californa’s kelp forests.

“The drone imagery and orthomosaics measure the effectiveness of the recovery efforts. To understand what canopies are growing or reducing. And then do more of what’s working, and do less of what’s not,” says Hewerdine.

The project is the first step towards kelp recovery.

Mapping a solution to some of the world's biggest problems
Ready for take off?
Pix4DreactClimate Change ebook