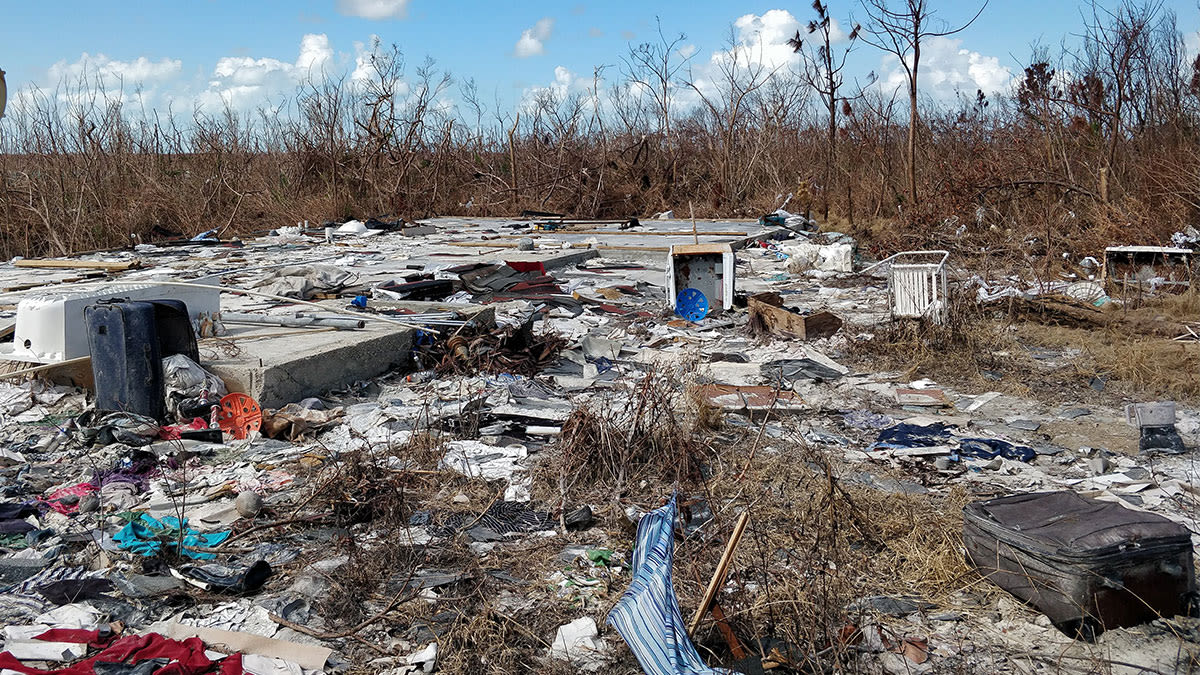 October 22, 2019
In the aftermath of Hurricane Dorian, communities are relying on people, supplies and technology to help with the recovery and rebuild.
Download PDF

Hurricane Dorian was the worst natural disaster the Bahamas have ever experienced. With almost half the homes on Grand Bahama destroyed, and thousands of people living in temporary shelters, the rebuild needs to begin as soon as possible. 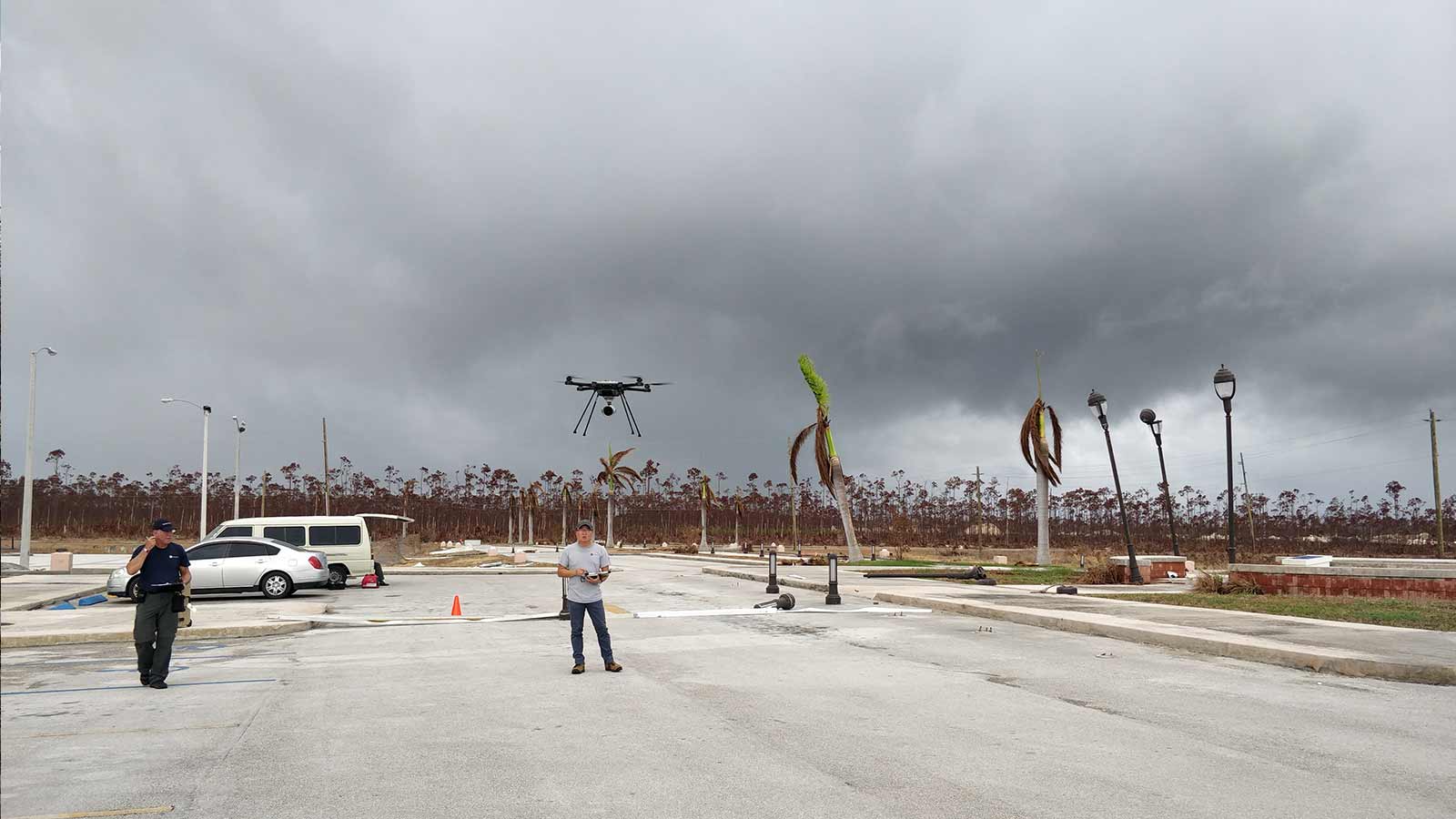 “The government was overwhelmed with the quality of the maps and the speed we were able to create them,” says Jowett Wong, GlobalMedic’s RescUAV team lead. 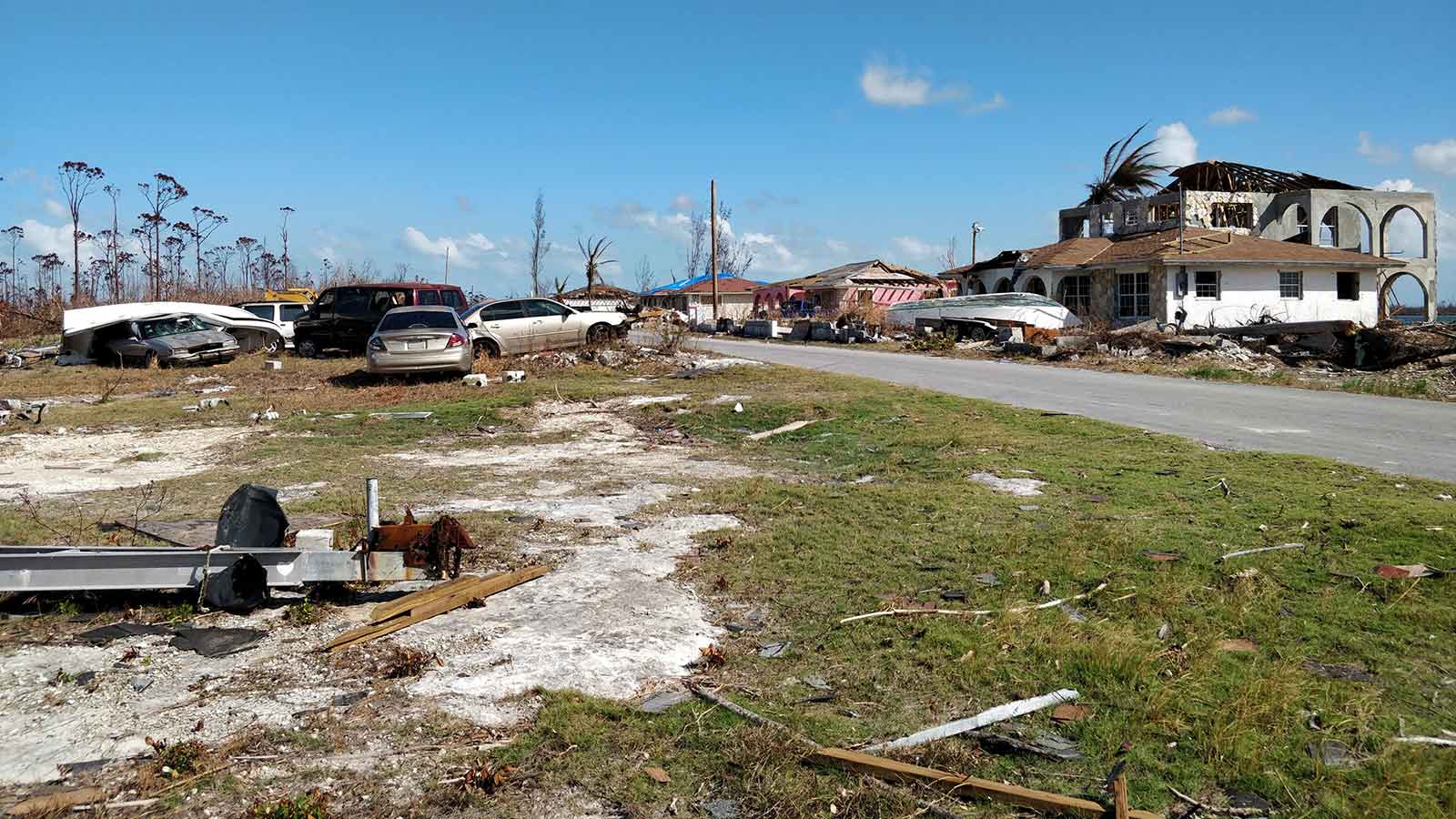 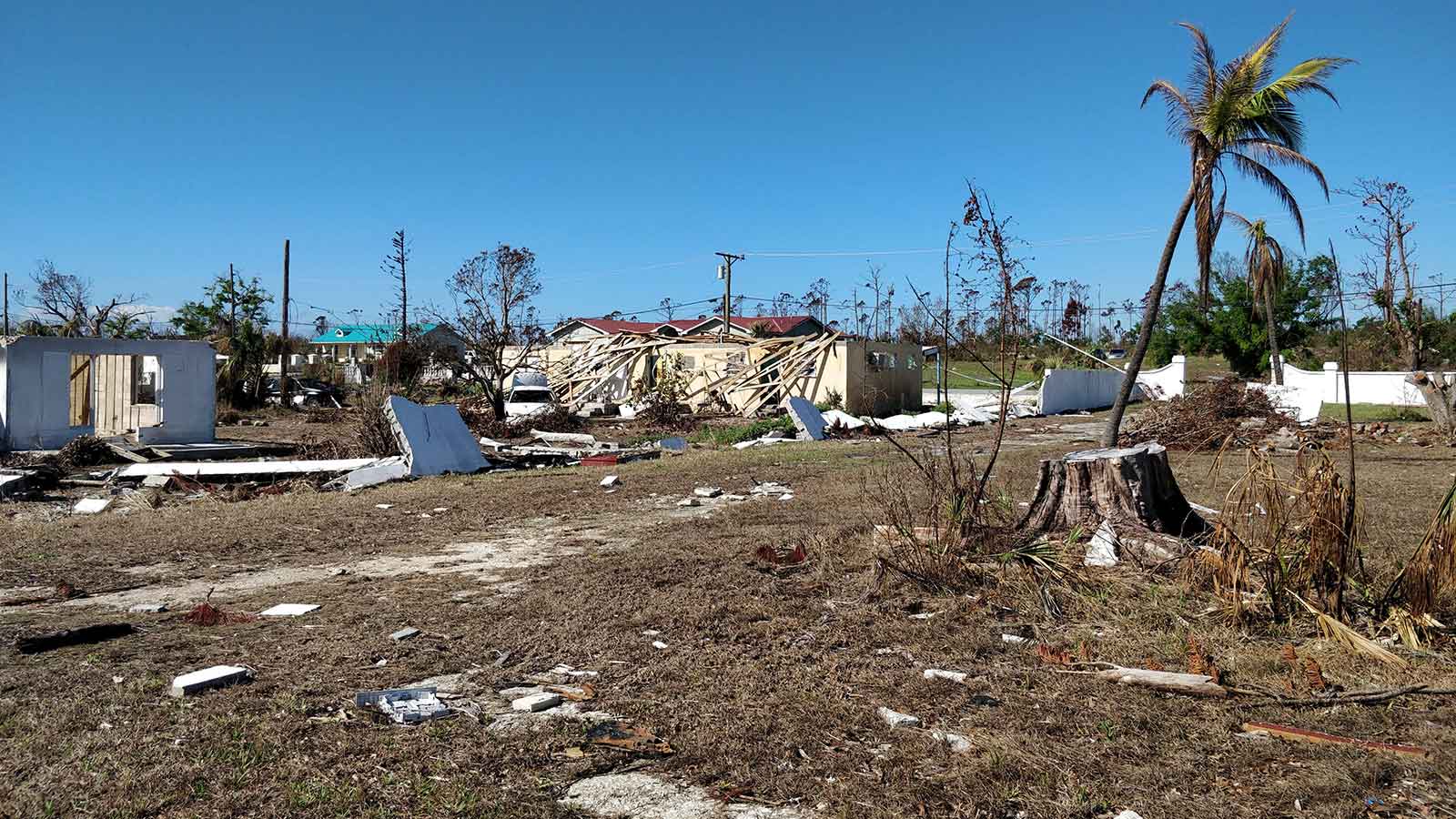 “It saved them from having to do some time-consuming ‘windshield assessments’ - getting into a car and driving through the affected areas. The drone imagery creates situational awareness for both us and government officials to begin the recovery process, and to get a grasp of how bad the situation is.”

The five-person team’s days begins by 8am, when they head out to one of the affected areas the government has requested they map. 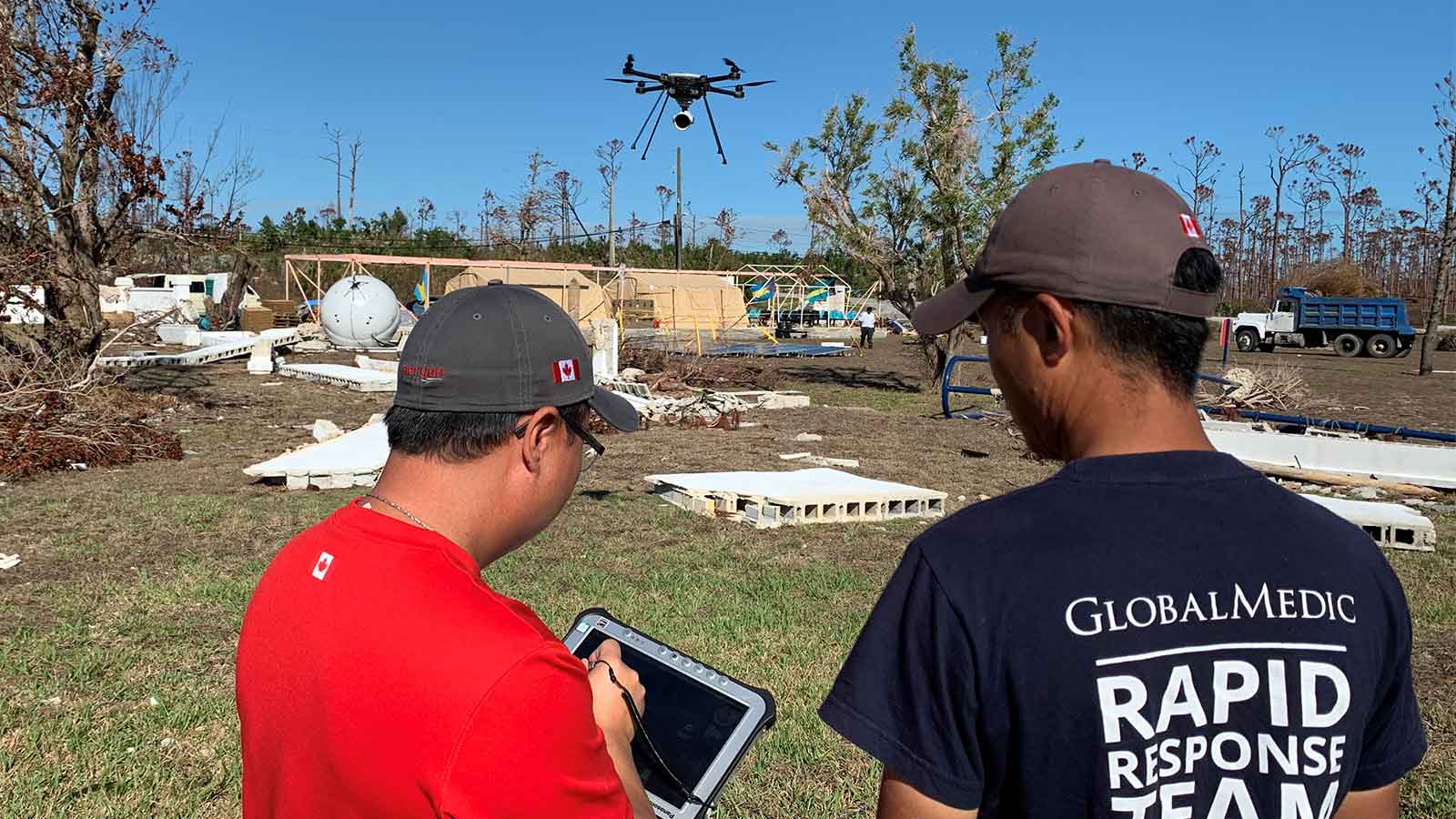 Huang (left) pilots a drone as Wong looks on
Their focus has been on the Grand Bahama Waterway, a canal system cutting through the central part of the island. The Waterway was significantly damaged by a massive storm surge, damaging the canal, its infrastructure, and devastating the communities on its banks.
The Category 5 Hurricane hit the Abaco Islands on September 1st, 2019, and Grand Bahama Island the following day, stalling over the island for an entire day. With a wind speed of 295 kilometers per hour, and storm surges of more than 7 meters, the devastation was immense. When Hurricane Dorian finally moved away from Grand Bahama on September 3rd, 60% of the island was underwater.

61 people were killed, and hundreds reported missing. Overall, 76,000 people were affected by the storm. Material damage was estimated at $7 billion US. Hurricane Dorian was the worst natural disaster the Bahamas have ever faced.

“On one of our mapping missions, we spoke to a resident living in one of the central areas of the canal system,” says Andrew Huang, drone pilot and FLIR Systems sUAS & Robotics Test Engineering Manager. “He was the only person out of his entire neighbour that stayed for the entire storm - storm surges of 15 feet, 20 feet, I don’t know exactly how high, covered his entire next door neighbours house. To the roof.”

Huang continues. “His house was built to withstand this type of storm, but we were just looking at the roof of his neighbors house and - that’s a lot of water that went up there.” 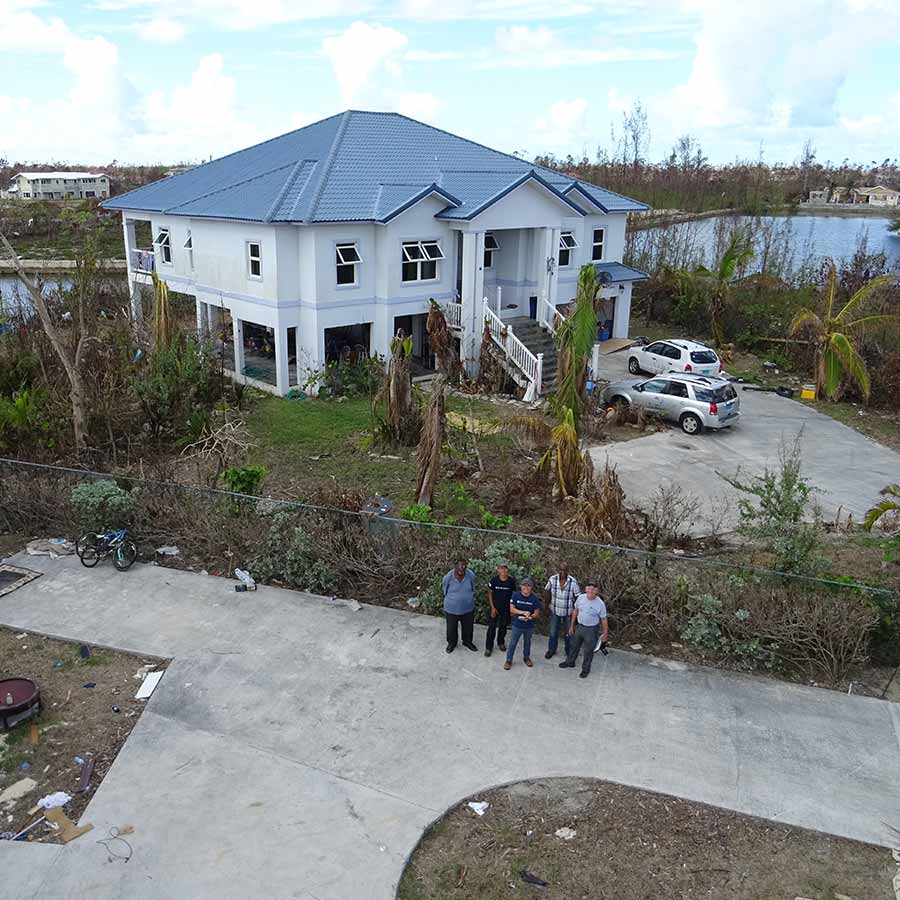 The construction of this home allowed it to survive Hurricane Dorian. The neighbor’s homes were destroyed

The small team are motivated to help as much as possible before being rotated out.

“I’ve been here two weeks,” says Huang. “Other than one day which was an all-day downpour, we’ve flown every day.”

“But we’ve flown in pretty treacherous conditions,” continues Huang. “We are not waiting for a beautiful blue-sky day with no rain in the forecast. We are in a disaster situation where people have lost their homes. We need to get our product up in the air to collect data, in order to use PIX4Dreact to stitch maps, so people can start figuring out what the need to do to get their lives back on track after disasters. We built the FLIR Systems SkyRanger R70 as an all-condition aircraft for situations like this, where delivering critical information as soon as possible is what’s important.” 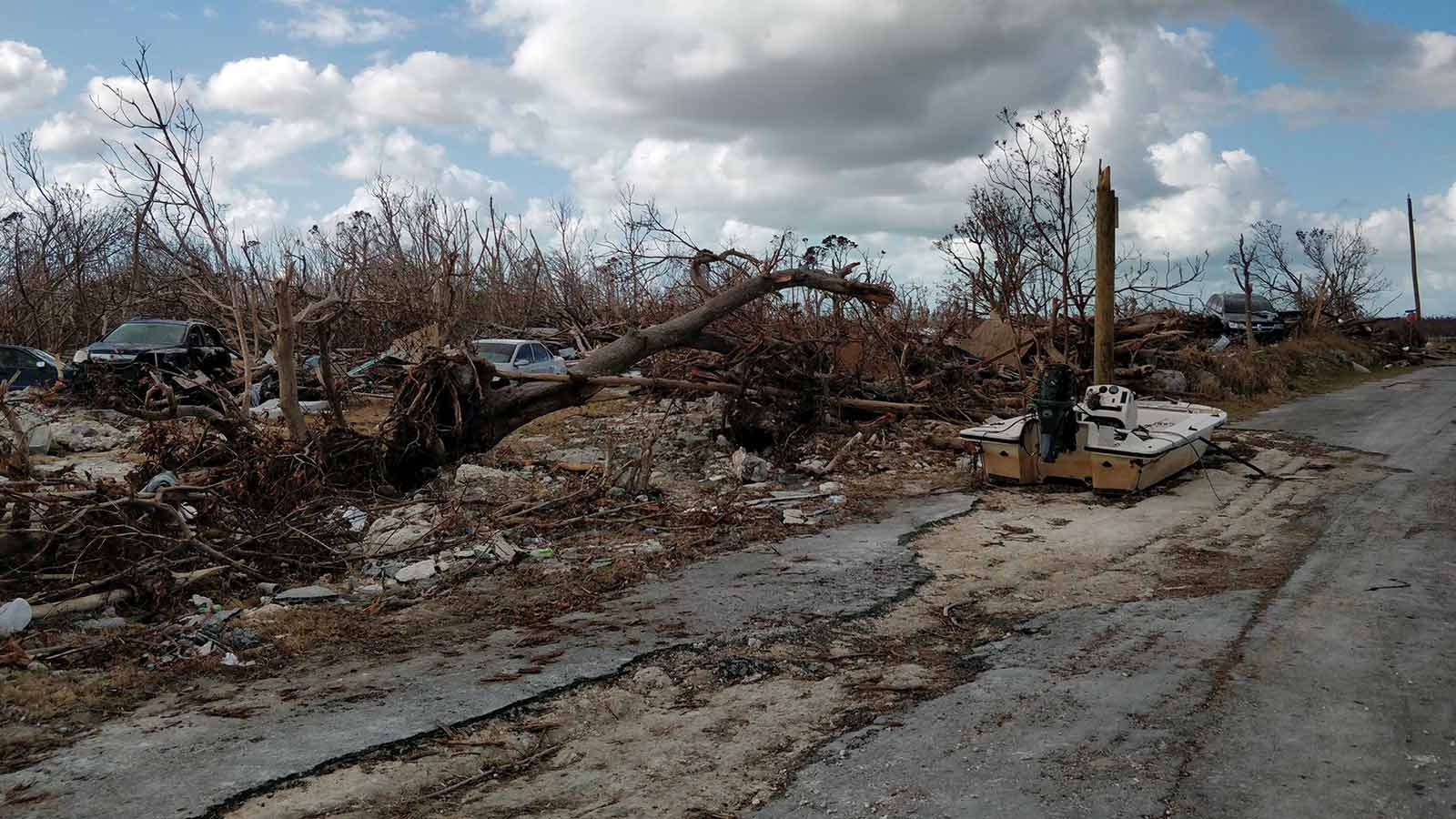 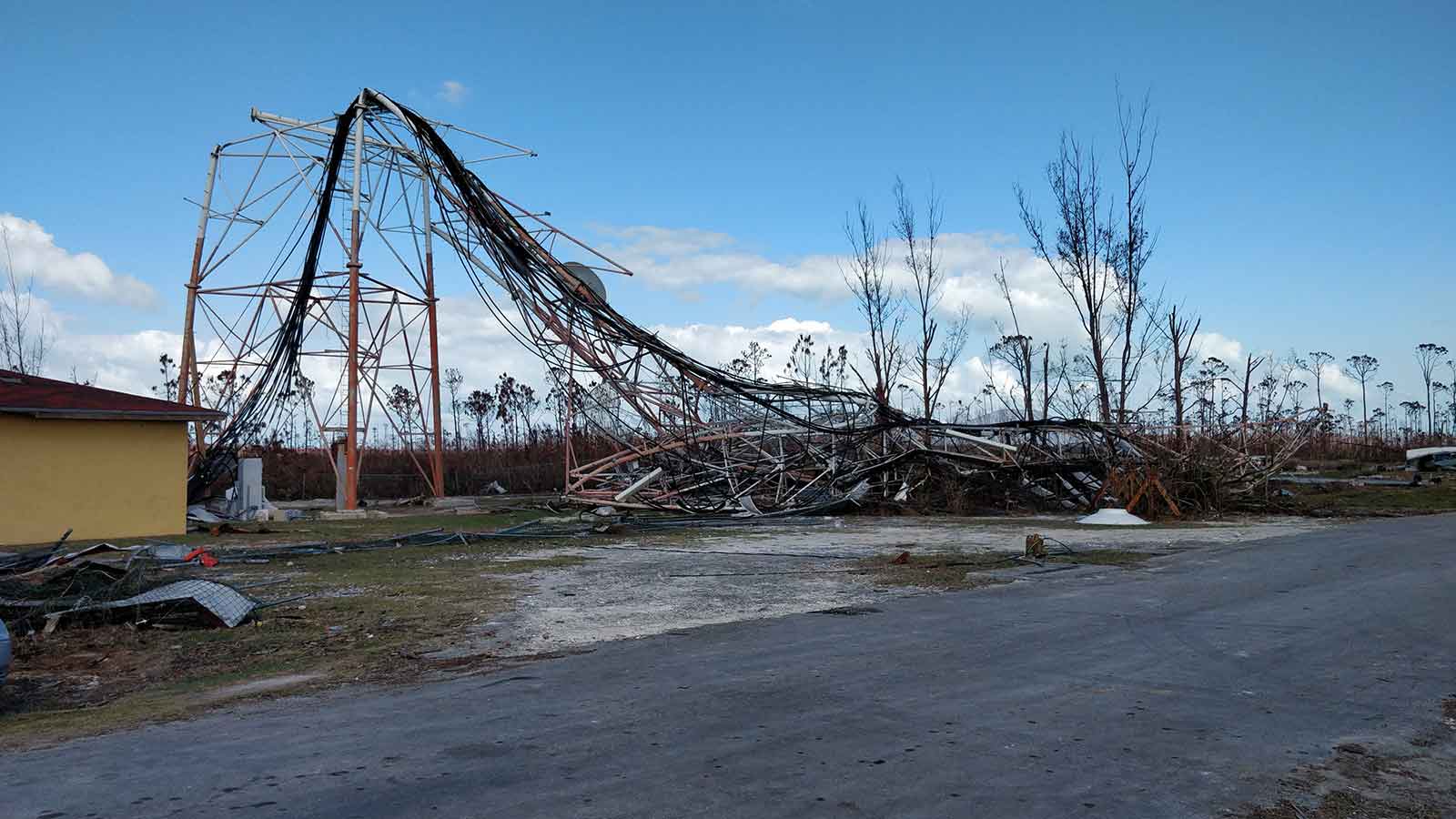 GlobalMedic have turned to PIX4Dmapper in emergency situations, using the software to generate maps after a devastating landslide in Colombia. But the laptop the team were using in the Bahamas was rapidly running out of space. 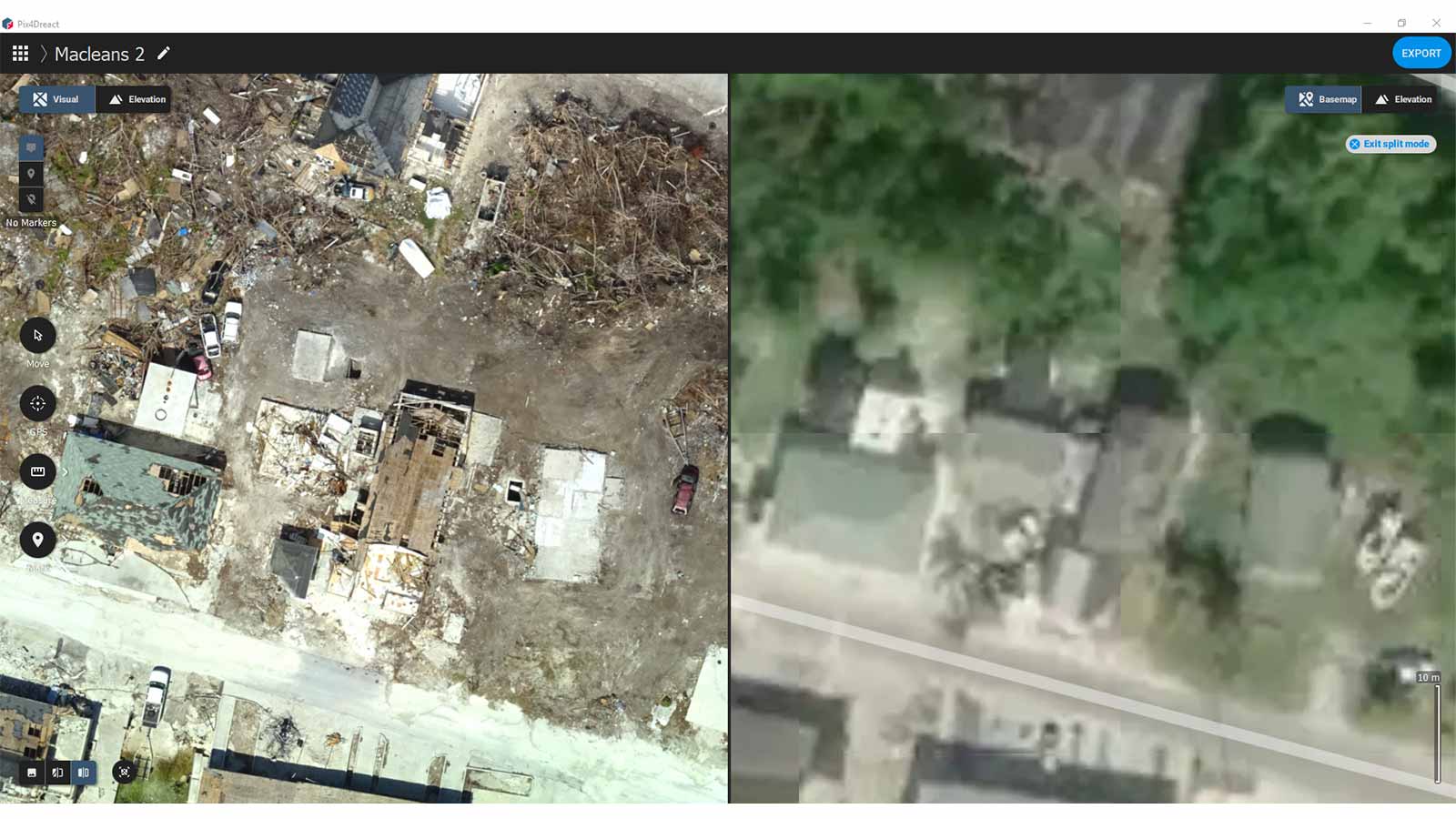 The team decided to use PIX4Dreact.

PIX4Dreact was designed to be simple to use, and was developed to meet the needs of emergency response teams in stressful situations.

Wong adds: “For the first couple of days under these conditions, we didn’t have broadband internet. We were running on a cellular hotspot, and we joked my phone almost melted from all the data we’ve mashed into it,” The team found the ability to process offline on a mid-range laptop was essential, but not the only advantage of PIX4Dreact.

“The slider feature - wow. That feature is incredible in terms of showing the before and after,” continues Huang. “We’re on the ground and flying, we see the situation. We know it’s bad. But we never realised how bad it is until we used the slider feature and saw the satellite picture and our own-day old photo over the top, and just the slider going back and forth.”

The slider tool in PIX4Dreact allows users to compare drone imagery with basemaps
“We know it’s bad. But we never realised how bad it is until we used the slider feature and saw the satellite picture and our own-day old photo over the top.”
“We discussed as a team, and we decided to focus on PIX4Dreact,” says Wong.

With the images stored in the hard drives the team brought with them, the data is available to make more detailed maps in PIX4Dmapper at a later date (and on different hardware).

By the time the team wraps up their day around midnight, they often have a completed map to share with authorities and other NGOs.

“It’s a serious situation, and to be able to provide this sort of information to first responders that quickly is incredible,” says Huang.

Amongst the devastation, the team focuses on the impact of their work.

Wong says, “Something that will stick with me is we were assigned a farm to map. The storm surges actually reached the roof of the barn. The people we spoke with at the farm were a couple who ‘housed’ their horse at the farm. The farmer asked our team to map the area and look for their daughter’s lost horse: the little girl wanted to save a piece of the mane before the horse was buried. So we uploaded the map to PIX4Dcloud and we asked the teams back home to do map appreciation to find the horse.”

“With this job, you’re not only helping the government. You’re helping that little girl, and that family. That hits deeper for me. It is a difficult job, but we’ve got a great team which makes it much easier to operate and do what we had to do.”

“We want as many people to get these maps as possible,” says Huang. “This data will be very helpful to start planning and rebuilding.”