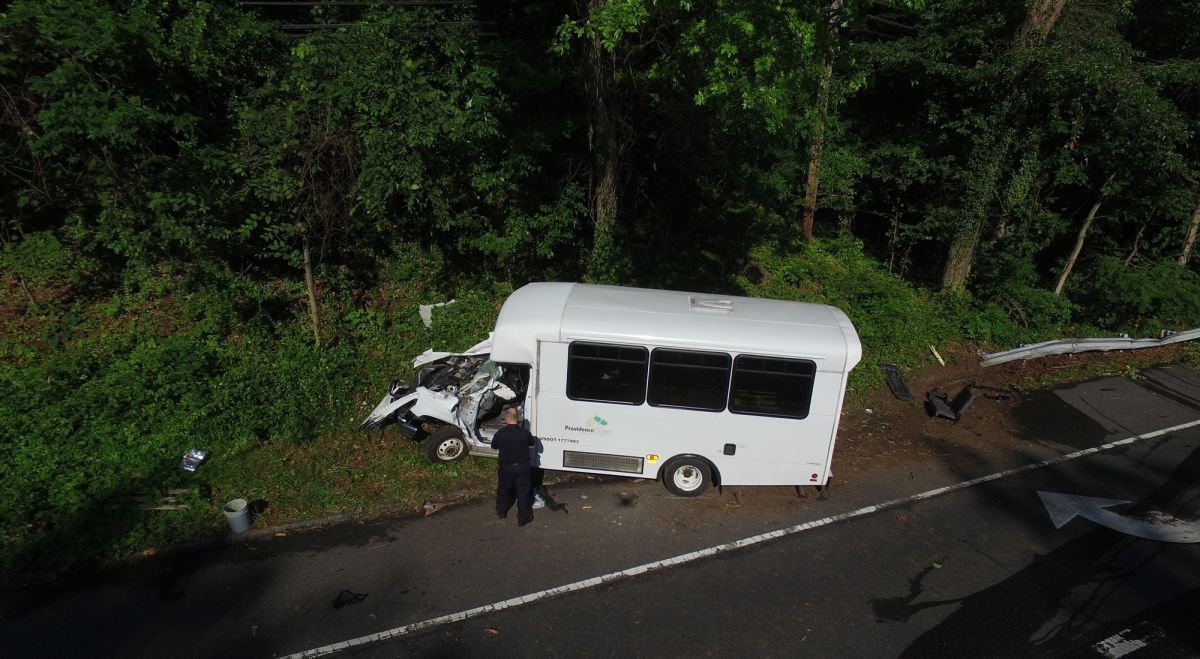 Analysis and documentation of a crash using drone mapping

November 8, 2016
After a serious minibus accident occurred in Maryland, Anne Arundel County Police used Pix4Dmapper and a drone to document the crash scene.

It was in the early morning of June 29th when a minibus from the Providence Center, an organization serving those with mental illness, headed south on Ritchie Highway in Maryland. In a random event at precisely 7:15 AM, a tree by the side of the route fell and struck the moving bus.

An “act of nature”.
Responding firefighters worked for nearly 35 minutes to free the seriously injured 57-year-old driver, who was immediately transported via police helicopter to Shock Trauma at the University of Maryland Medical Center. Two other passengers with minor injuries were taken to the Anne Arundel Medical Center.

The highway southbound route 2, from Chautaugua Road to Route 50, closed for an hour. Police stated after the investigation that the accident was an “act of nature” and that it was unlikely that the driver could have avoided it.

The Anne Arundel County Police manually controlled a DJI Phantom 3 Professional drone to capture videos and images of the scene. The goal was to document, in detail, the information on site, as well as to acquire overlapping images to reconstruct the scene in Pix4Dmapper photogrammetry software. The point cloud, 3D model, and orthomosaic outputs were implemented in CAD software to make diagrams and conduct follow up analysis.

A complete collision investigation report starts with basic information: such as the location and date of the incident, victims involved and their status, vehicle models and year of production, weather and road conditions; and finishes with advanced measurements and crash analysis. Key elements for the analysis include the diagrams of the damaged vehicle profile superimposed over the undamaged one, actual measurement of the damage, and the vehicle’s post-impact travel. Here we provide sample diagrams* to explain those elements in more detail. 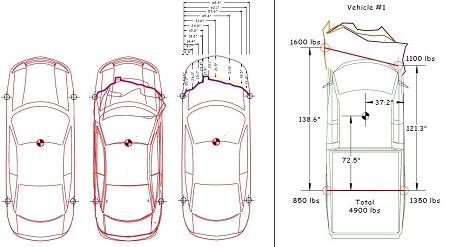 Due to regulation, above diagrams are not directly related to this accident. They are displayed as samples to showcase the report elements

A diagram of the damaged vehicle profile is generated in CAD software by importing the Pix4D orthomosaic. This diagram is superimposed on the undamaged diagram in the database.

Damages over the vehicle are then measured and quantified to give information on the speed it was traveling and the force it endured during the crash.

Due to regulation, above diagrams are not directly related to this accident. They are displayed as samples to showcase the report elements

Along with the simulation and the crush force information, the trajectory of the vehicles involved in the accident is documented.

This gives the information on the vehicle speed and how it moved, in terms of distance and rotation angles, after the crash happened.

Reconstructing the crash scene within hours

Using drones to document an accident scene is very advantageous, in both time spent and cost. Speed is crucial for forensic cases, in order to capture as much accident information as possible before cleanup starts, or before evidence is damaged, in adverse weather for example. Speed also influences the amount of time a road or highway needs to be shut down.

For accident cases similar to this one, the highway could have been shut down 3 hours (e.g. using LiDAR to document the scene) instead of 20 minutes (using a drone), causing more damage to circulation and even to the economy.

Another advantage of drone documentation is the fact that taking images or video clips with a drone records detailed information of an area of interest without intruding on police site investigation. Within a few hours, these drone images can be turned into a fully reconstructed scene by with Pix4Dmapper photogrammetry software. Exported 2D orthomosaics and 3D models provide proof and evidence for the collision investigation report presented in court.

As we discussed with Aerial Metrics, drones and aerial mapping have become the go-to solution for crash reconstruction, investigation and documentation.