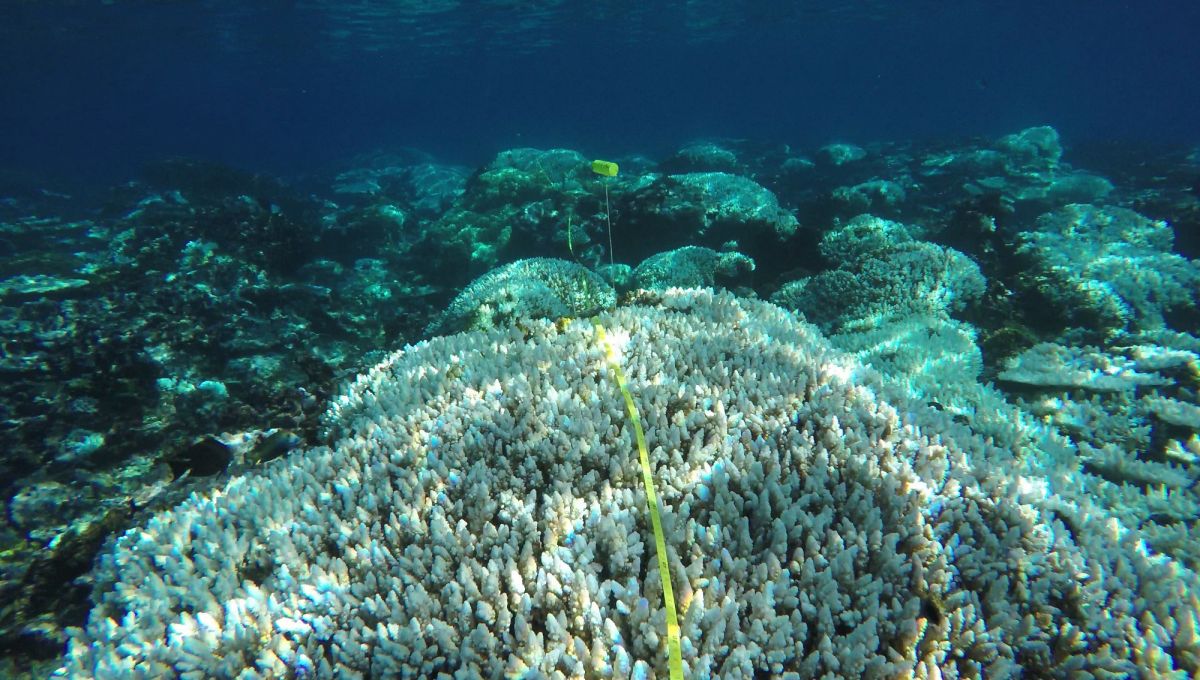 Coral reefs are one of the richest ecosystems on earth, and contain nearly one third of marine biodiversity. Apart from being a natural fortress against swells and storms, coral reefs also provide food and shelter to a large variety of marine populations. However, this ecosystem grows very slowly and is extremely fragile to environmental changes.

Coral reefs are very sensitive to changes in their environment, placing them in danger. A rise in water temperature, change of chemical composition of the water, over-fishing and extensive agriculture have become major threats for corals reefs. Fully understanding this ecosystem and potential negative impacts towards it is key in saving coral reefs.

With Reef Check France, a participatory science initiative that allow low cost marine habitat mapping, we studied the potential of using underwater images and Pix4D software to survey and better understand the reefs. Indeed, 3D models offer new possibilities of analysis. One 20-meter-long transect was reconstructed with Pix4Dmapper in order to measure bleached areas, identifying species and estimating the living coral surface. The line transect was necessary to assess the coral reef status of a defined sentinel coral reef habitat. 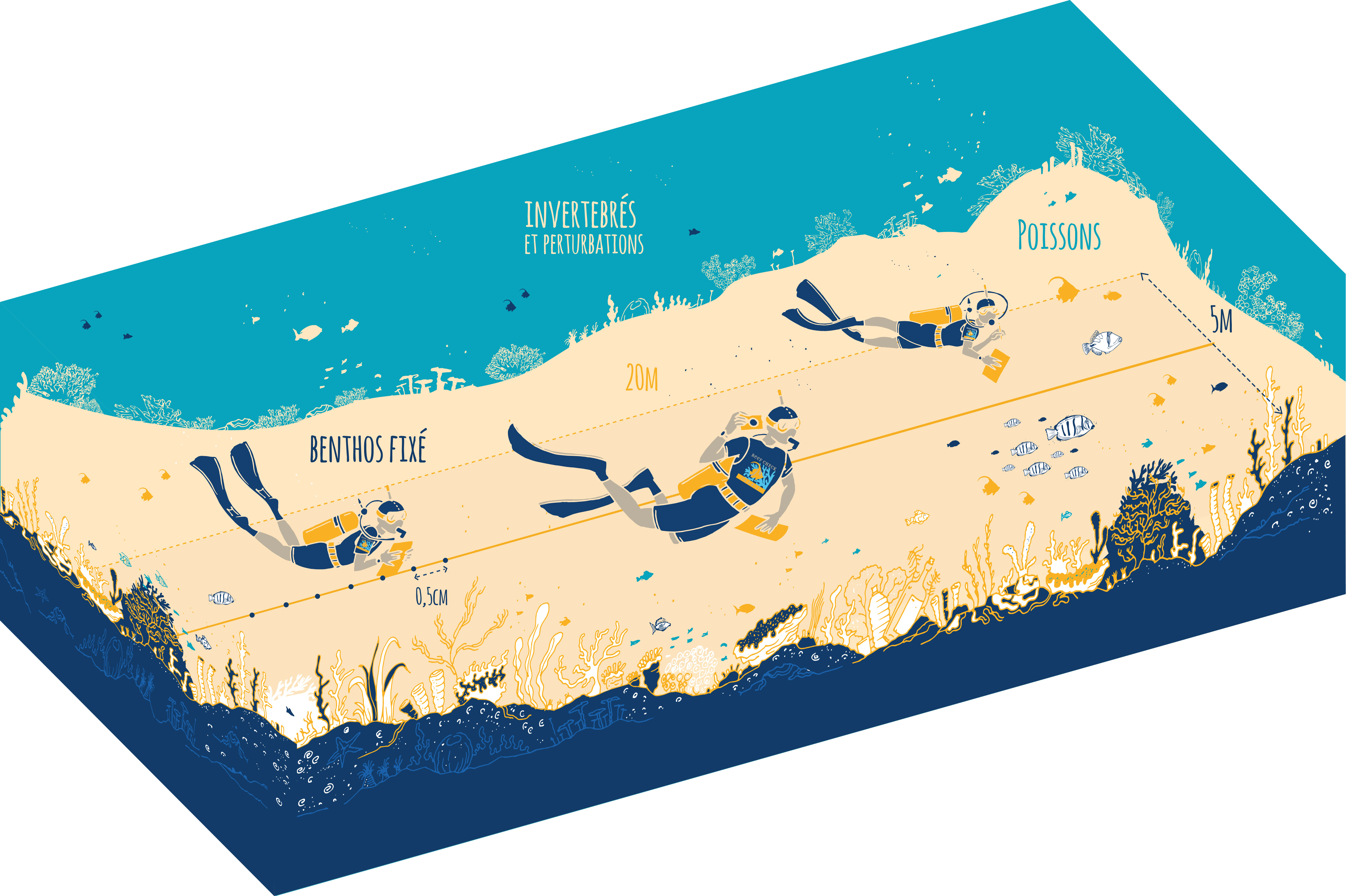 The survey was conducted in Lagon of St Leu’s pass, a reef on the southeast of La Réunion (Reunion island), with the target region located 2.5 to 3 meters under the water’s surface. Pictures were taken with GoPro Hero 4 black edition cameras, on full resolution settings. Reef Check transects are within areas where reefs have been regularly surveyed by diving volunteers. They manually counted and noted the different species they saw. The entire transect, 100 meters long and 5 meters wide, was divided in 5 divisions of 20 meters in length. 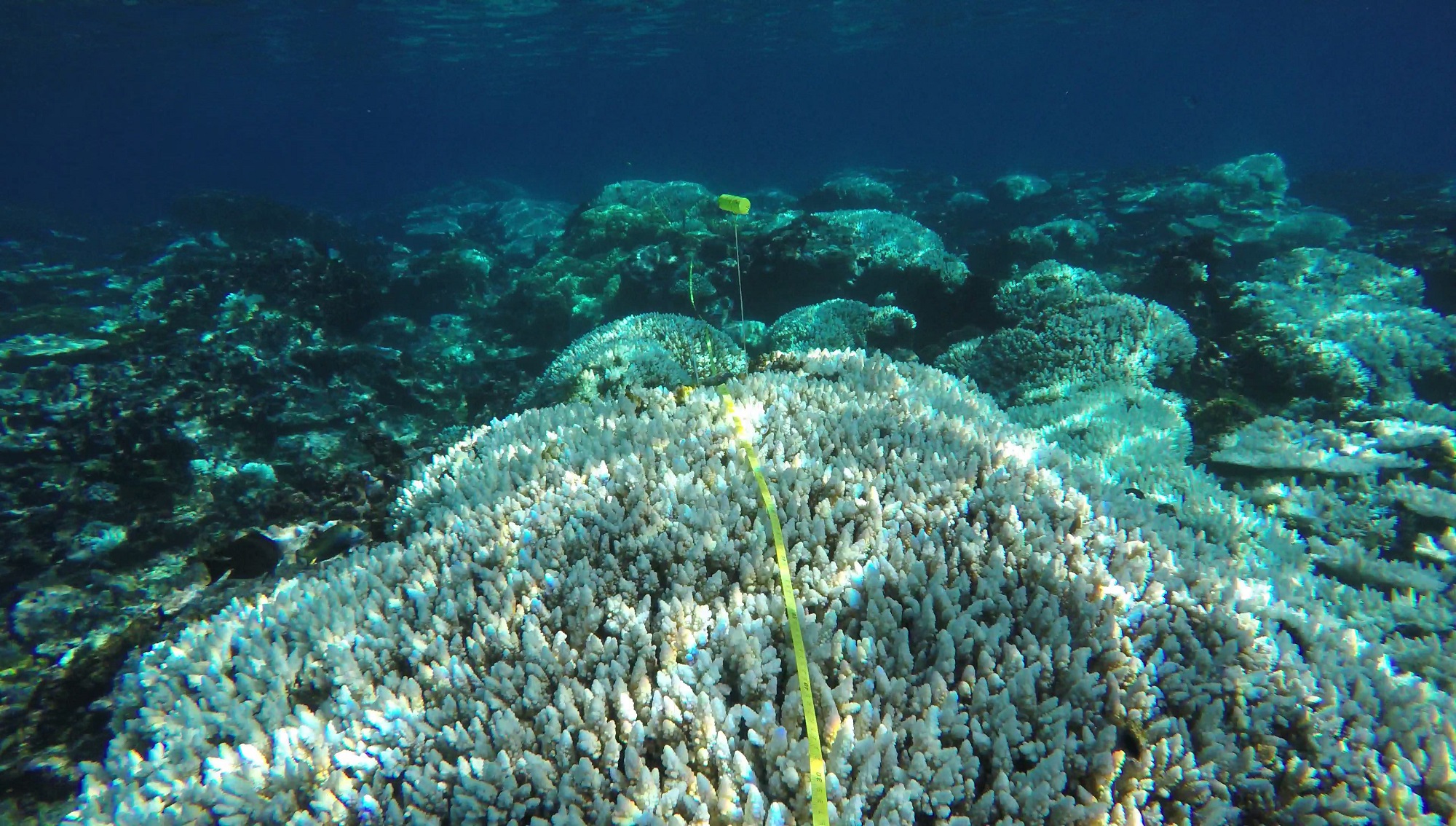 A tape was placed in order to provide scale of the transect and divisions.

This study was conducted over a 20-meter division of a transect. Several difficulties were encountered due to the underwater conditions, such as large distortion from GoPro fisheye cameras, unstable lighting conditions, as well as the complex structure of the coral reefs and their movement with water current.

To minimize the influence of these issues, images were acquired with very high overlap, ensuring the entire region was well-covered without discrete changes between images. As a primary test of underwater mapping, images were taken manually by swimming by with two GoPro cameras attached to the extremities of a 1-meter-long metal bar, shuttering every 2 seconds. 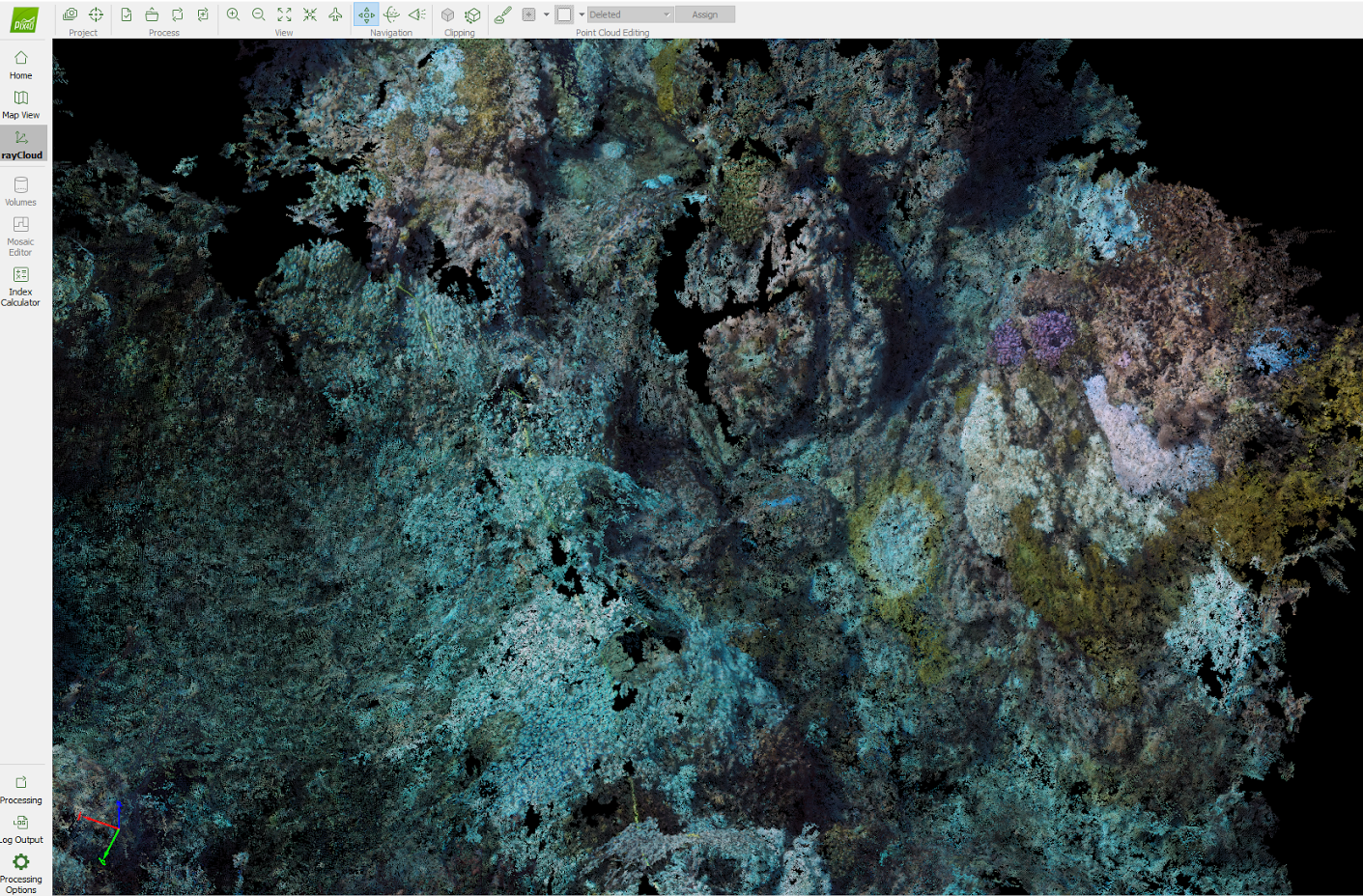 This test’s main goal was to discover whether the data would be exploitable for photogrammetric restitution. Various effects induced by the water have made the entire processing more challenging. Rays of light, in particular, are perpetually moving and make it extremely difficult for the software to identify and match keypoints on images.

In the end the process went quite smooth, even though processing more than 1,600 images required some computing power. The whole model turned out well and presented fewer artifacts than expected, overcoming the issue of large-distortion from wide-angle cameras, chaotic reef structures, and the refraction of sun rays.

Mapping underwater coral reefs with images allowed Reef Check volunteers to spend more time studying fish and invertebrate while in the water, while still getting data needed from the reef itself. With these reconstructed outputs, more precise numeric data can be obtained. Before the technology was applied, such values could only be correctly estimated by expert divers.

Another advantage of this technology is its non-invasiveness, allowing the study of an environment in the office with less stressful field operations and coral extractions. The ease of repetitive surveys will make an amazing database for following coral reef evolution, with the possibility to quantify all changes in near-real-time. 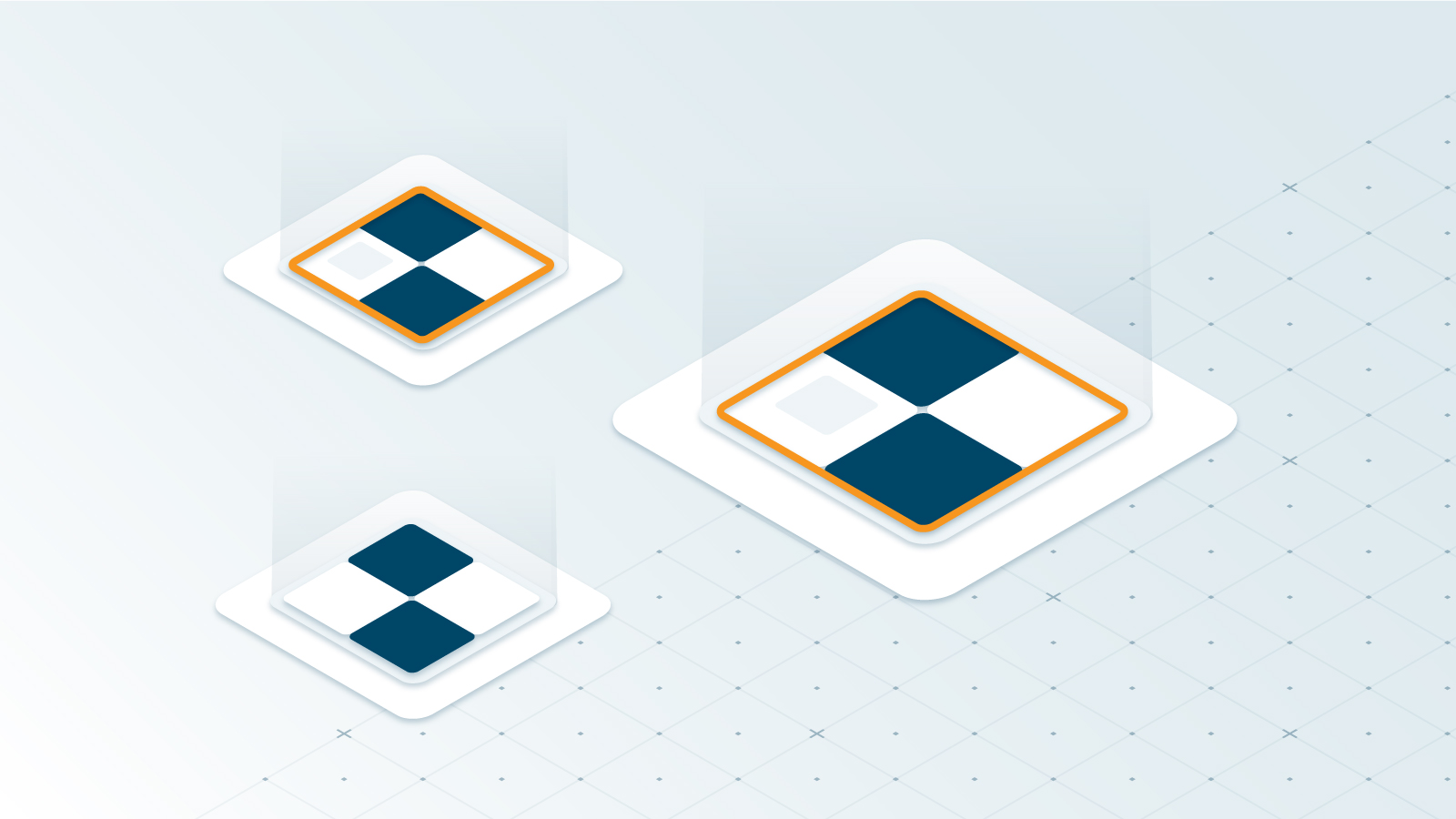