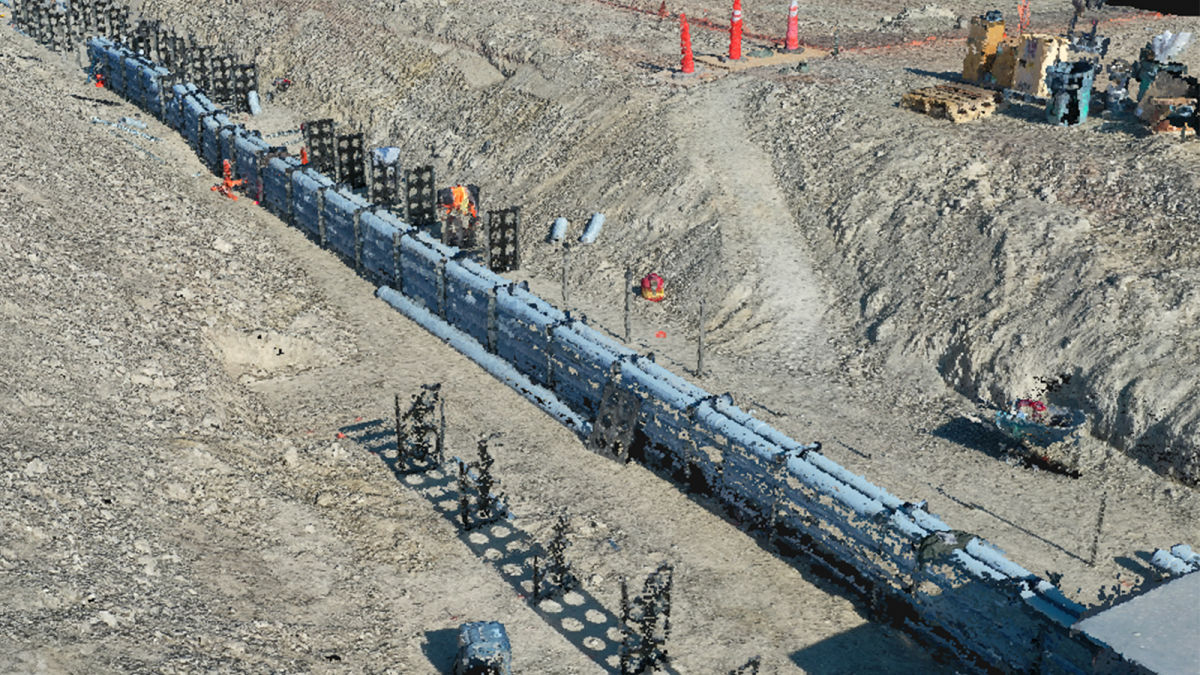 When as-built drone data and PIX4Dcloud save the day

May 19, 2021
Monitoring the progress of a large data center with PIX4Dcloud keeps everyone on the same page and prevents a gas line rupture.

Minneapolis-based Mortenson is a construction company with over 67 years of experience in construction, solar energy, and infrastructure. In May 2018 Mortenson was hired as a general contractor for a data center project in Eagle Mountain, USA. The data center currently consists of 3 buildings each of which will be approximately 1 million square feet when finished.

Working on a large project like this inevitably has its challenges. Obstacles such as planning and logistics, dangerous underground utilities, site progress tracking, and lack of up-to-date data are only a few of the challenges Mortenson’s team has faced with this project. However, with the right tools, challenges can be overcome, the project's progress can be tracked accurately, and all stakeholders can be on the same page.

Three buildings on one site

As this site is spread over an area of 500 acres, logistically there are a lot of challenges for Mortenson as well as for the different trade partners working on the project. On top of that, the three buildings were not started at the same time which makes monitoring of the project progress more complex.

“PIX4Dcloud is helping us to remotely track the progress of each building and to share it easily with the trade partners over the cloud, as each building is at a different stage of construction. We also use the data from PIX4Dcloud during briefings to specify who needs to work where. Logistically, It worked out very nicely that way,” says Ryan Fluckiger, Sr. Integrated construction coordinator and Reality capture lead at Mortenson.

To ensure the safety of the general public and construction workers, it is crucial for the Mortenson team to locate and avoid damaging utility lines before starting any groundwork. Encountering underground utilities is costly and can lead to budget and schedule overruns. Failing to properly locate the utilities poses a great risk of electrocution or even worse - gas line ruptures which can lead to an explosion.

That’s why Mortenson’s team was very careful with the underground utilities of the project and was verifying their location within PIX4Dcloud. “On a weekly basis, the superintendent was overlaying a CAD file with a utility map on top of the orthomosaic and sharing it with the trade partners online. They could see right away where the utilities are on-site and avoid encountering them. This was happening while they were planning or digging on-site,” explains Fluckiger. 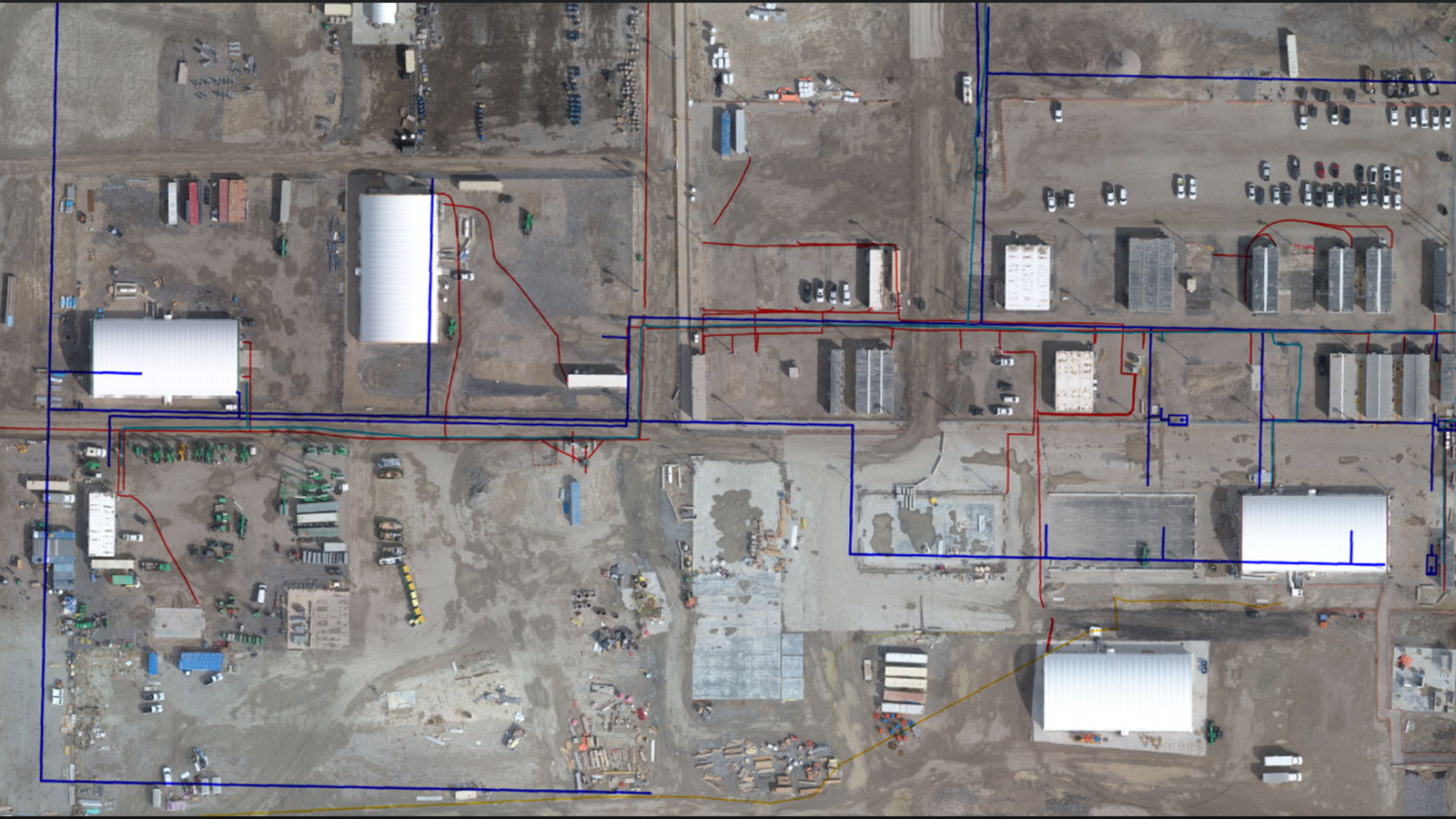 The Overlay tool of PIX4Dcloud Advanced allows you to easily overlay design plans and utility maps onto the 2D orthomosaic of your project. In this way, you can check the as-designed vs as-built images to quickly spot errors or to easily verify the schedule of your project.

As a general contractor of the project, Mortenson oversees and coordinates the building of the project. To avoid potential schedule deviations and logistics problems, and to ensure the progress is on design and schedule, the team has to know the progress of the job site for which the team trusts PIX4Dcloud.

Fluckiger says: “We use the PIX4Dcloud data to verify that the project is progressing according to the schedule. Being able to plan and weekly track the progress of the project has been invaluable to our superintendents who are coordinating and planning the work. If there is an issue with the Internet and they cannot access the platform, it is maximum an hour before they call to check what is wrong. That’s how valuable PIX4Dcloud is for them.”

Keeping everyone on the same page

Throughout the project lifecycle the Mortenson team works with different subcontractors and for every single one, having up-to-date information of the as-built is important to be able to complete the job.

The trade partners are using the project data delivered from the Pix4D platform to verify their work and to avoid encountering underground utilities while the owner of the project is keeping an eye on the overall progress of the project.

Contractors getting paid according to the work done

Working with many subcontractors on the site requires the Mortenson team to be able to properly track the work done by each subcontractor so that they can get paid for what they did respectively. For example, the team used PIX4Dcloud to check the installation of fences on site.

Tracking the dirt being moved

Mortenson’s team is performing the earthwork in-house. As this is a big project and the team is moving millions of cubic yards of dirt, small miscalculations can have great consequences. That’s why the Mortenson team is constantly keeping track of the dirt being moved with cut and fill calculations of stockpiles.

“Within the PIX4Dcloud software we can verify how much dirt we have moved before and after if everything was correct or we miscalculated - pretty fast and hassle-free,” comments Fluckiger.

In 2020 while excavating the site, a mistake concerning a gas pipe could have cost people’s lives. “The subcontractor company received a CAD file and was told that it contains the latest data of underground utilities but it was not accurate. Luckily, they had PIX4Dcloud and they were able to see that some lines looked like gas. Having a detailed look, they confirmed with certainty this was gas. That was a good catch that the subcontractor was able to discover thanks to PIX4Dcloud,” explains Fluckiger. 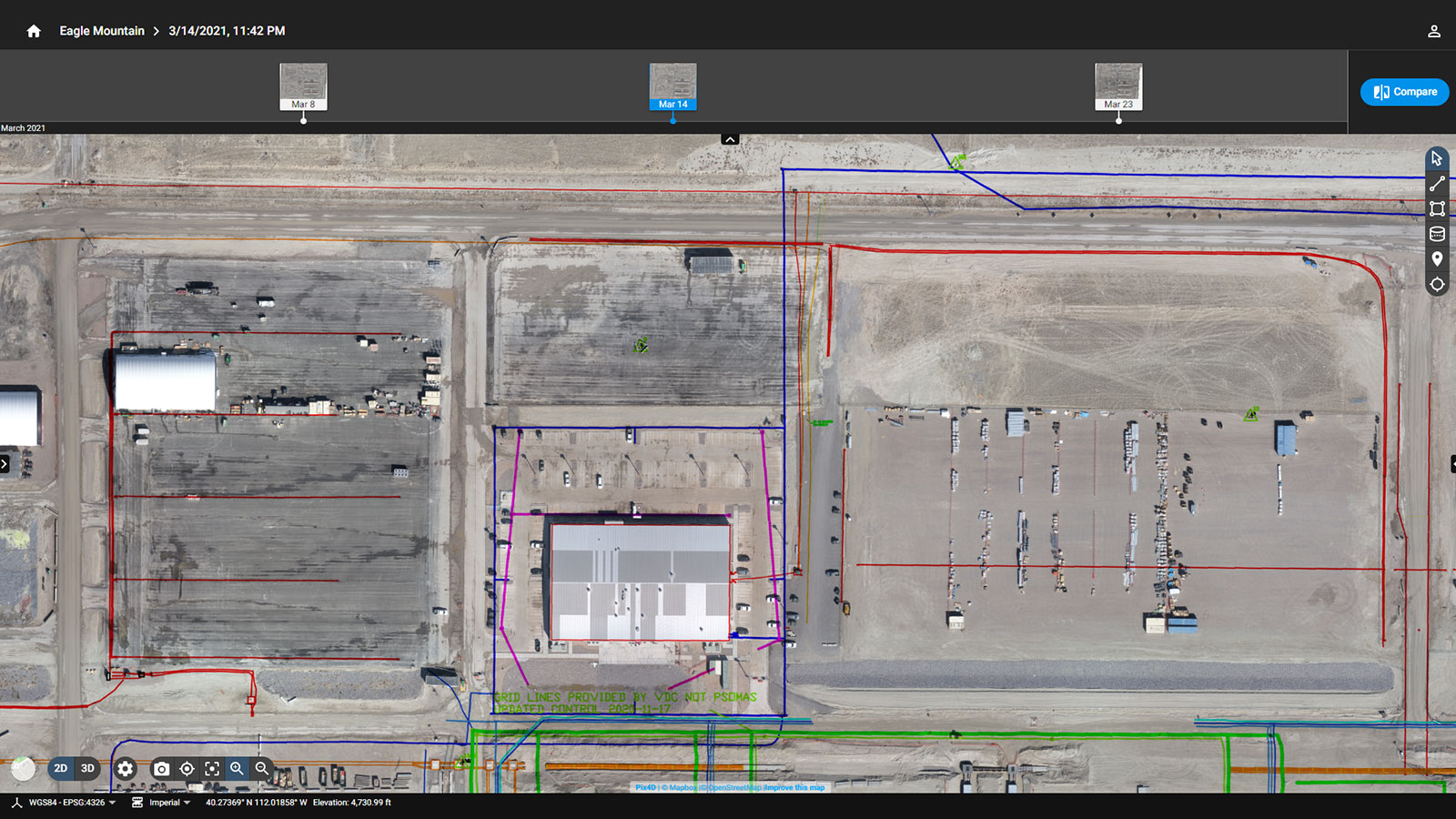 Fluckiger adds: “If the gas line was not spotted in time, anything could happen - from an explosion to severe injuries. This is not only a hazard to people working around but it could disrupt the service because we have a live data center on-site. That would shut down all the utilities. It would cost money and time but also people’s lives which is the worst outcome.”

Integrating PIX4Dcloud deliverables into other software

To further verify utilities, the Mortenson team is exporting the point clouds in Navisworks. “The process is fairly easy - click, download, and upload to NavisWorks. It takes a couple of minutes. We also upload the orthomosaics to the Bluebeam for demonstration purposes and to Revit to further plan and optimize the logistics on site. That is one of the reasons for choosing Pix4D - many options for downloading outputs and also the file formats we need,” adds Ryan Fluckiger.

Ready to try PIX4Dcloud on your projects?
Learn morePricing