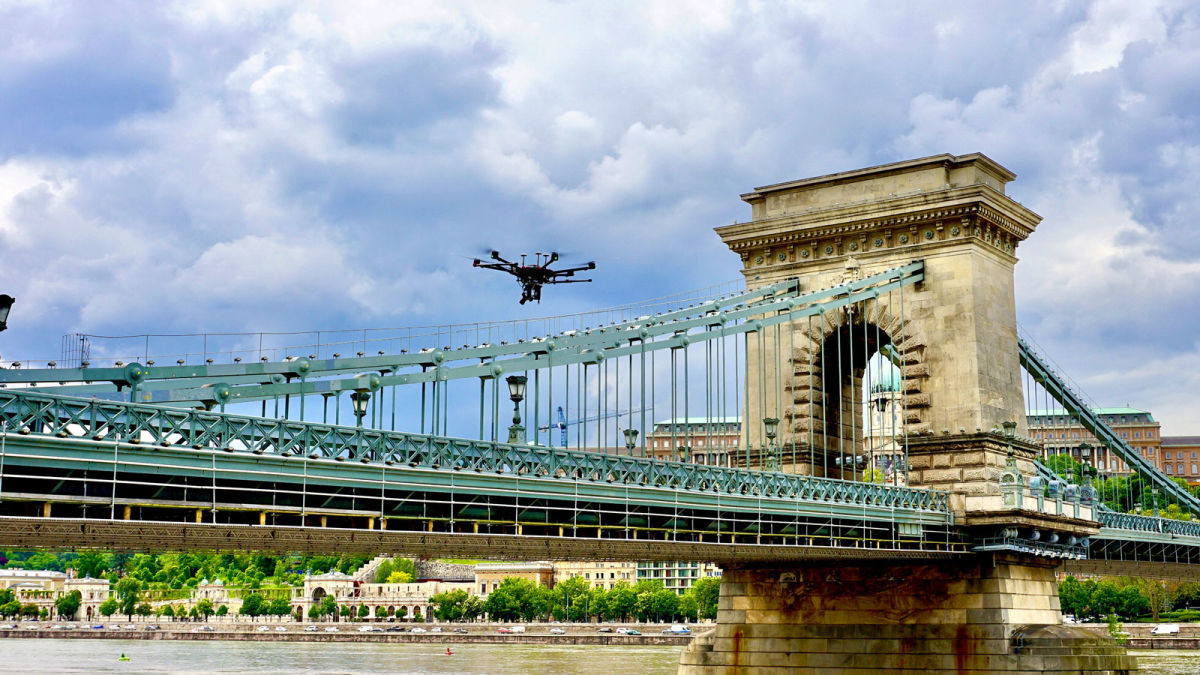 February 23, 2022
Two companies partnered up to create a 3D model of the famous Chain Bridge in Budapest with photogrammetry software PIX4Dmapper

One of the most iconic structures in Budapest, Hungary has to be the Széchenyi Chain Bridge. It spans the Danube river between Buda and Pest, connecting the eastern and western halves of the city. Originally built in 1849, the chain bridge is at the heart of Budapest, with the buildings of Parliament nearby as well as the Hungarian Academy of Sciences. Upcoming maintenance work intends to expand the capacity of the bridge for cycle and pedestrian tourism so that more people can use the crossing. It is also being rebuilt with lighter materials. The bridge had been bombed in World War Two and rebuilt with concrete at the time, which made the bridge age more quickly and made it heavier. Maintaining the original style of the bridge, complete with beautiful cast iron designs, is important to preserve the heritage of this model but the restored version will be lighter and more durable. 3D modeling is being used to create an original record of the bridge and assist in measurements for preparing for restoration and renovation work. 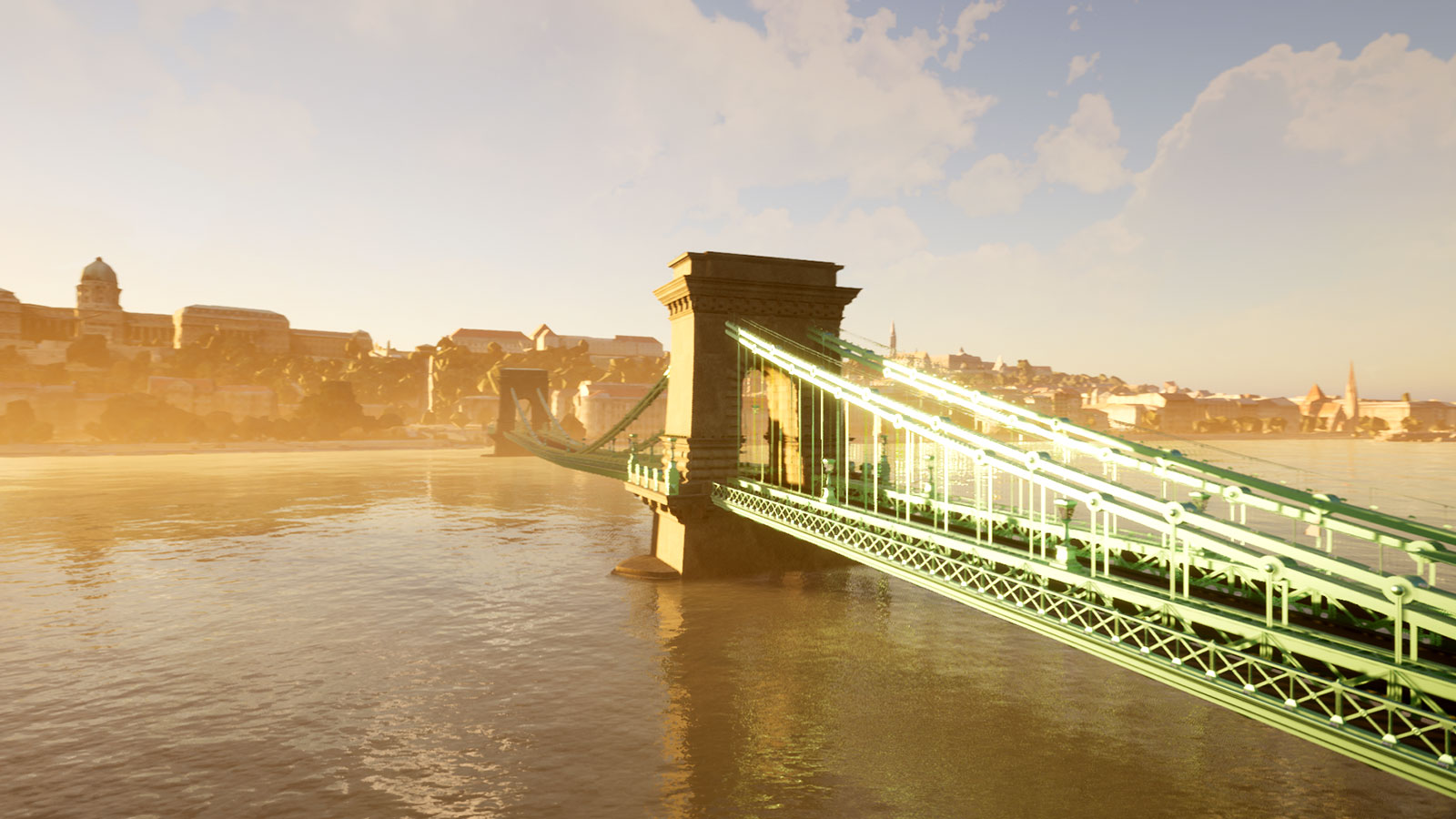 A project of this scale and size is bringing in multiple contractors. The two specialists working on creating a 3D model are Bimfra and Ventus-Tech. Both Hungarian companies are specialized in assisting design, construction and maintenance work. In a collaborative effort, they shared ideas for workflows that could enable them to gather both photogrammetry and LiDAR data of the bridge and river bed and bank details.

They split the work between them: Ventus-Tech managed data collection, post processing and on-site activities, whilst Bimfra was in charge of data management and 3D modeling. They used a combination of drones and remote controlled boats to collect data from every angle of the bridge, working on a tight schedule to complete data collection prior to scaffolding being mounted around the bridge. Both companies were operating on a pro bono basis, committed to the effort by their appreciation of the bridge and recognition that a 3D BIM compatible model made with photogrammetry could be a valuable deliverable.

3D modeling a bridge over a river

The chain bridge is over the Danube river, which is of course an active waterway with changing water levels. Ventus-Tech needed to gather data about the channel, the river banks, and the bridge itself to create a comprehensive 3D model. Ventus-Tech have their own GPS and GNSS systems that they would use to get accurate geolocational data about their sites. For data collection, the two companies agreed on a multi-faceted data collection workflow:

Data collection was not simple though, as the team faced multiple challenges in this urban surveying project, but the greatest was orchestrating and coordinating the multiple surveying methods involved. After the data was collected it would be shared with Bimfra to initiate the BIM workflows. Ventus-Tech needed to be able to collect all the data without errors in one visit, and ensure it could be merged on various processing platforms including PIX4Dmapper. 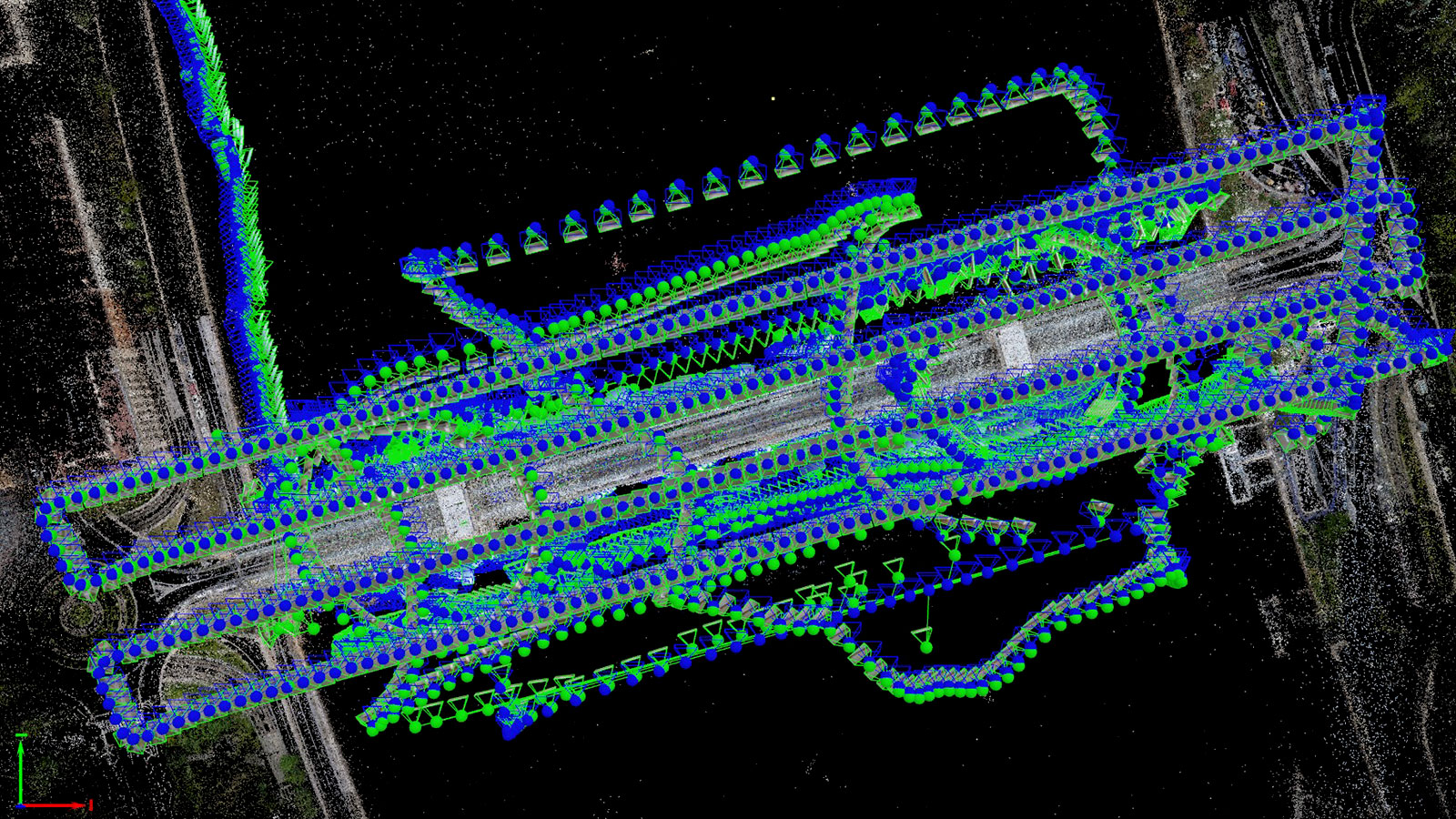 The location of the bridge in the center of Budapest makes it a difficult area to survey. Firstly, drone use in urban areas is generally under various controls worldwide due to disruption of people or distracting traffic. Secondly, as this bridge is closeby to the office of the Prime Minister as well as other government buildings, there are even stricter regulations for UAV use. Ventus- Tech had to have special permission from the Hungarian aviation authorities, and were given specific rules that included not flying closer than 100 meters to the balcony of the Prime Minister’s office.

Once they had gained authorization to fly drones in the center of Budapest, the team set to work. They also had access to a Bathymetric survey to analyze the river bed directly underneath the bridge. With this they were able to reconstruct the terrain underwater as well - and even discovered unexpected factors, such as a car that had previously crashed into the water there. 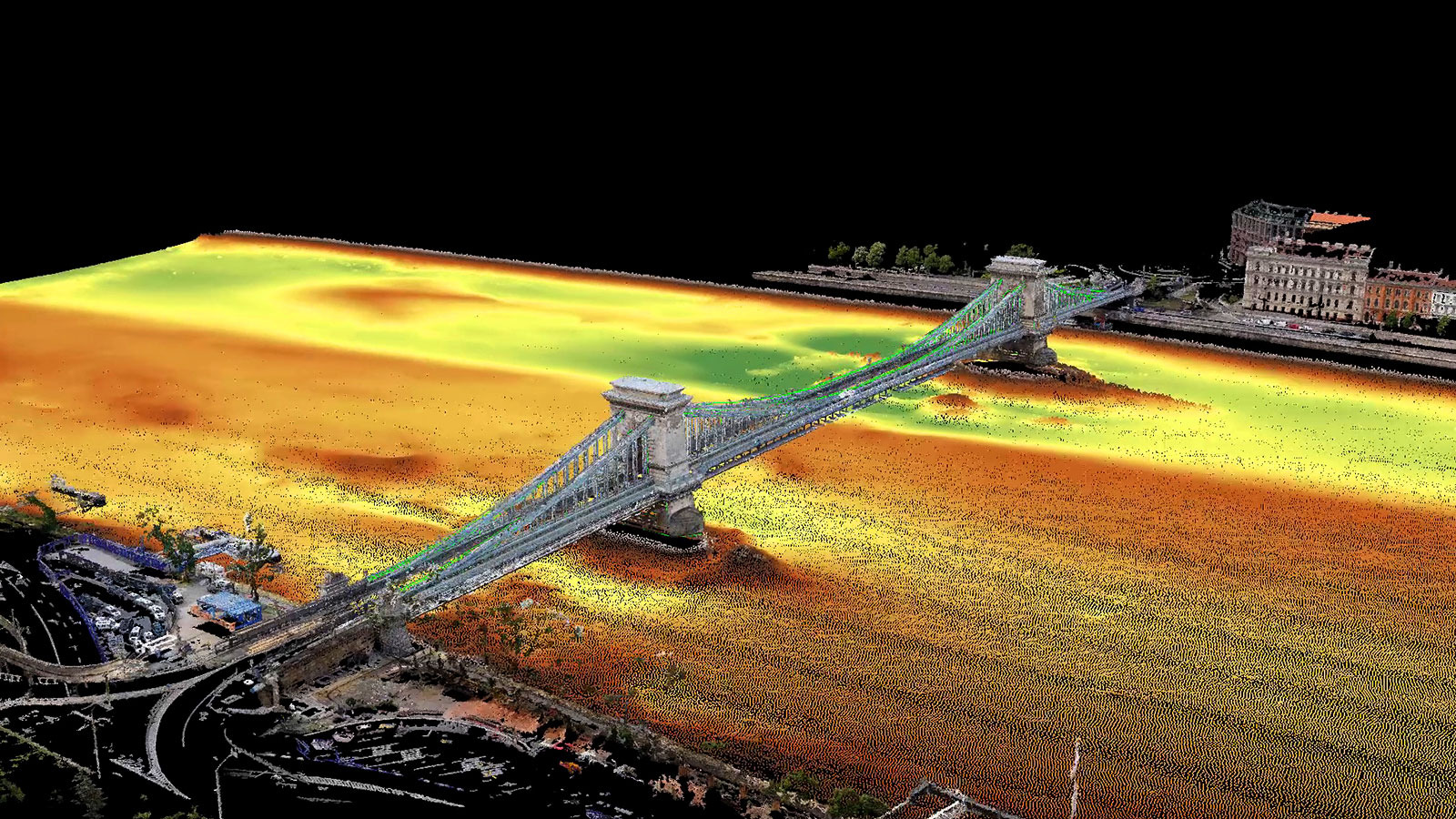 The Bathymetric survey was combined with photogrammetry and LiDAR data

Data collection with drones for photogrammetry requires overlap between images, and also does best in certain lighting conditions. The team had to work fast because construction crews were already starting to set up scaffolding on the underside of the bridge.

They collected nadir imagery with the drone as well as photos with a 30 degree tilt oblique. The cameras and sensors on the boat had 45 and 60 degree tilts to make sure they could get the best result from the underside of the bridge. The flight with the drone was automated but due to the high water traffic on the Danube river as well as the high tide pushing the boats off course, the boat was piloted without any automation. The boat first did a sweep of the north side of the bridge, and then the southern side, to make sure that both sides of the structure were captured in equal detail. 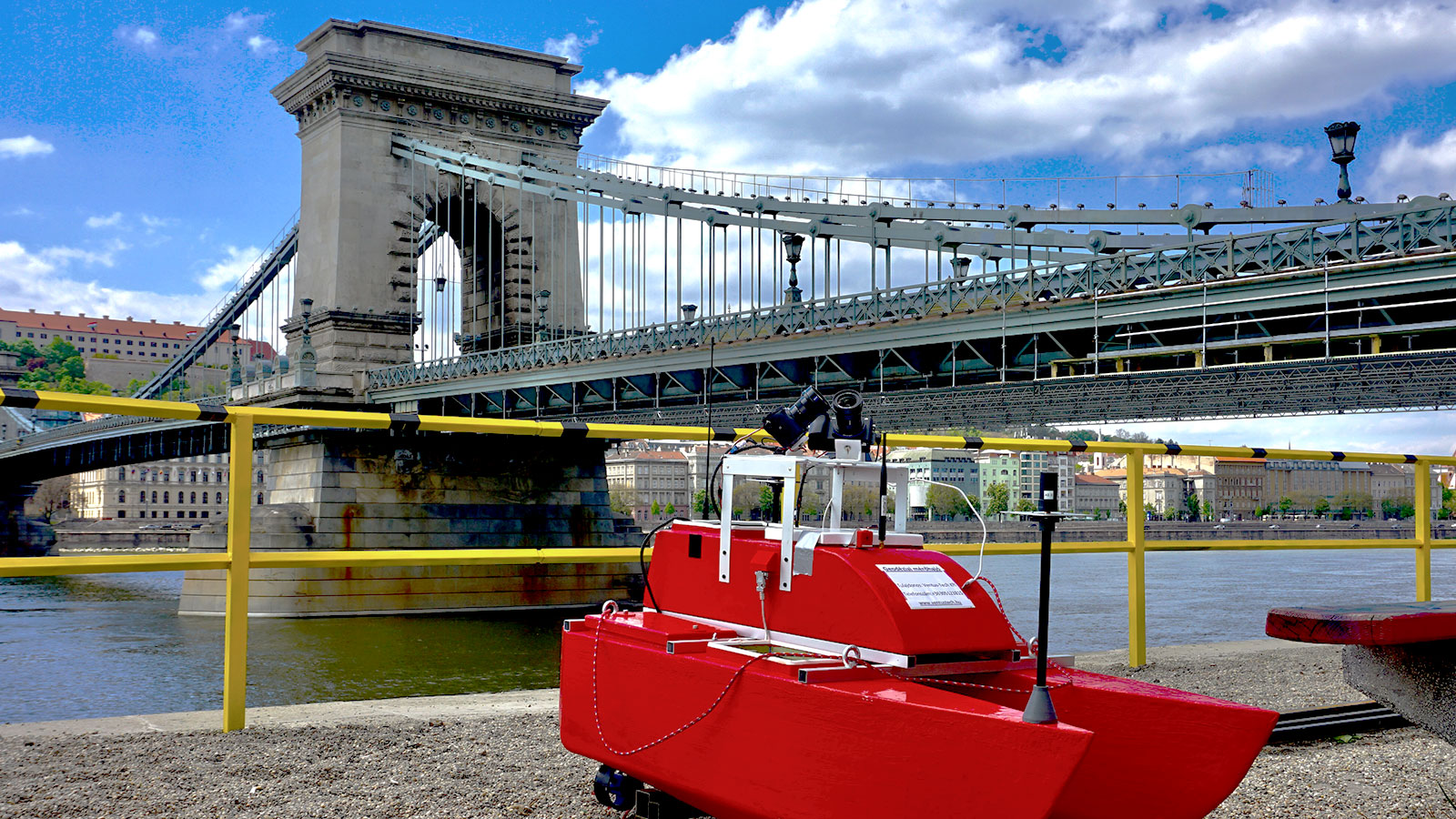 The remote control boats were easy to navigate on the Danube

The experience of both Bimfra and Ventus-Tech was a big asset that contributed to the success of this project. The Ventus-Tech team knew that they would face challenges getting authorization to fly as well as maintaining geolocational accuracy. Between the two of them, they were able to accommodate for this in multiple areas, including the GPS reception. During the data collection for the boat, the team had 2 GPS receivers. They geolocated the camera with one receiver and used the other to compensate that data. When they found errors for geolocation during processing, they used both values as well as dead-reckoning to deal with the signal being blocked under the bridge, enabling the team to minimize issues with accuracy.

After data was captured, the images were processed in PIX4Dmapper. The overall GSD of the project was around 1 centimeter per pixel, providing a high level detail. This means that the intricate detailing on structures on the bridge can easily be revisited on the 3D model. Thanks to using PPK processing, the accuracy of the project was consolidated after processing. This helped save time on-site because of the threat of scaffolding obstructing data collection. Bimfra then used building information modeling software (BIM) to generate highly detailed results that can be used for structural engineering. Through their coordination, Bimfra and Ventus-Tech were able to accomplish a successful BIM workflow by analyzing the requirements early on and capturing the data with the required level of detail so they could manage it in a common data environment. 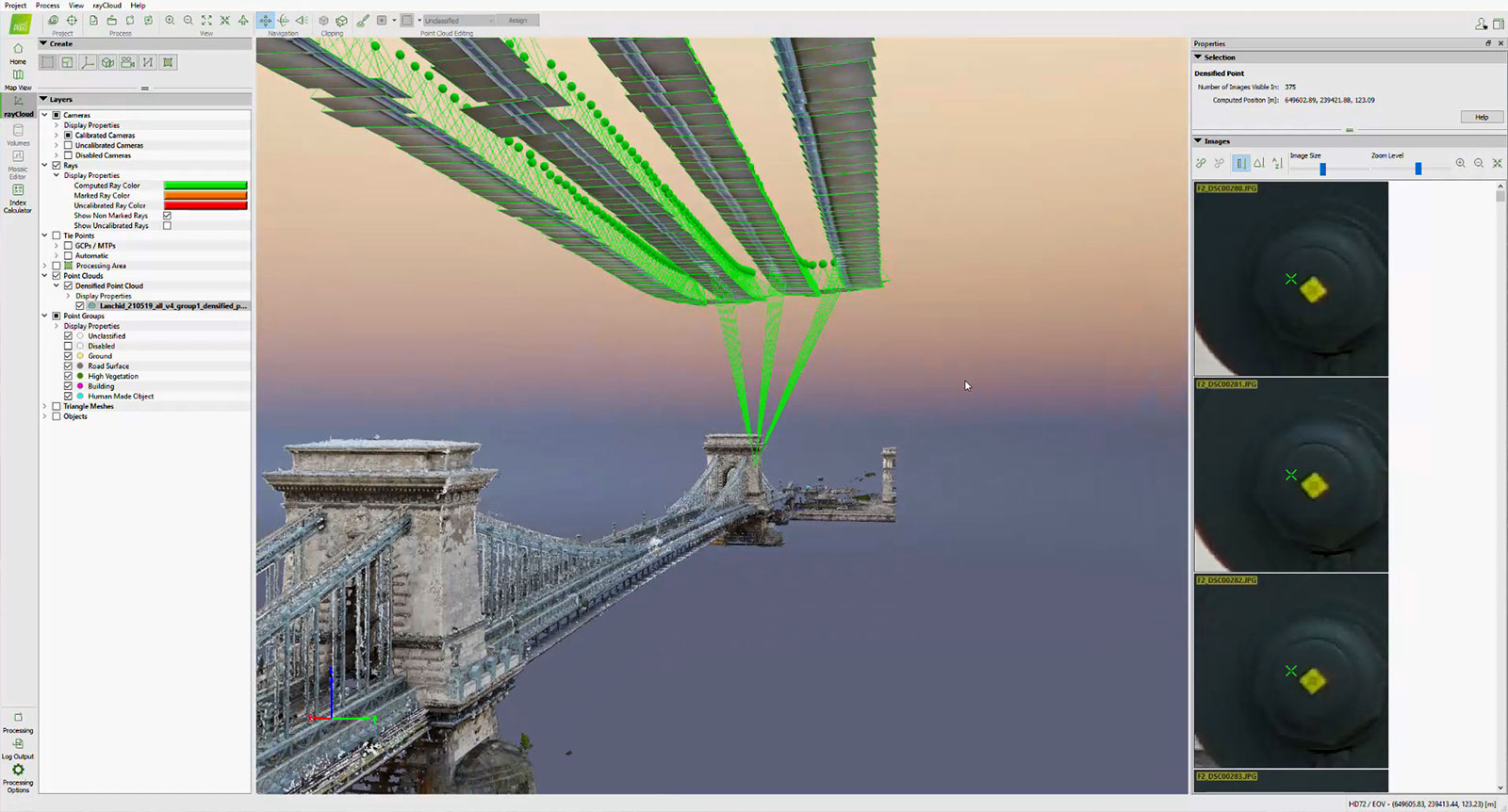 The team had to deal with multiple challenges for this project, and had only 30 days of authorization in which they could complete the flight. Working with drones in urban areas is not easy, but the team were able to get their desired results with accuracy they could trust thanks to processing with specialized photogrammetry software. Now Bimfra and Ventus-Tech have a digital 3D BIM compatible model of the Budapest Chain Bridge that will be used by construction and restoration teams in the planned maintenance work.