Capture the castle: mapping Chillon in 3D with drones

May 31, 2014
The challenge: mapping the famous castle Chillon, inside and out in a single day, using only consumer grade cameras and drones.

Over the last few years, more and more high quality imaging sensors have become available at lower and lower prices. At the same time, people have access to software which can handle such sensors efficiently and automatically build 3D models purely from images.

It is realitivly simple for even a novice to reconstruct simple geometries in 3D. But more complex geometry still poses a challenge.

Efficient mapping is answering the question: “how many image locations are needed to model a complex structure (for instance a castle) with all its geometrically complex structures and inside all rooms.”

The answer is different when considering cameras and drones compared to traditional laser scanning.

With laser scanning, a single scan can measure a full circle of 306 degrees, as long as there are no obstructions.

However, mapping purely from images is a little more complicated. 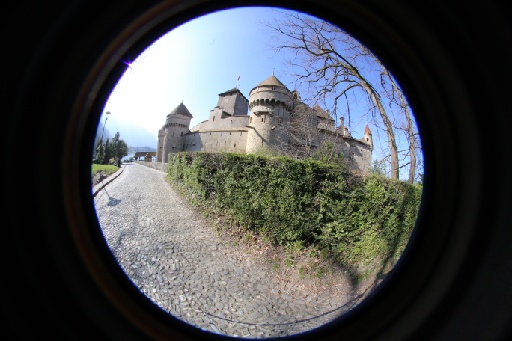 The exterior of Chillon castle shot with a fishey lens
A fisheye lens can map a much larger area than flat images.
Image based 3D reconstructions need at least two images. Based on two images, one can compute a 3D point only for the structures visible in both images. The amount of a 3D structure that can be modelled with two images also depends on the lens: a fisheye lens covering 180 degree of the scene can map a much larger area than perspective images that depict only a small area.

As we planned to map the entire castle in a single day, these questions were vitally important: how could we map most efficiently while still capturing a full reconstruction?

The oldest parts of the castle have not been definitively dated, but the first written record of the castle is in 1160 or 1005. The rocky island on which the castle is built was both a natural protection and a strategic location to control the passage between northern and southern Europe. From the mid 12th century, the castle was home to the Counts of Savoy, and it was greatly expanded in the 13th century by Pietro II. The Castle was never taken in a siege, but did change hands through treaties. 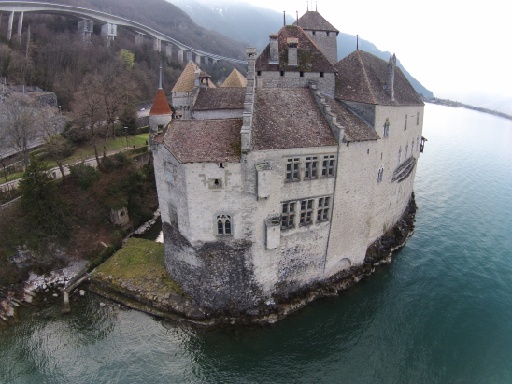 Chillon castle captured by a drone

It was made popular by Lord Byron, who wrote the poem “The Prisoner Of Chillon” in 1816 and who also carved his name on a pillar of the dungeon. The castle has inspired many artists and writers, from Jean-Jacques Rousseau, Victor Hugo and Henry James to Delacroix and Courbet. 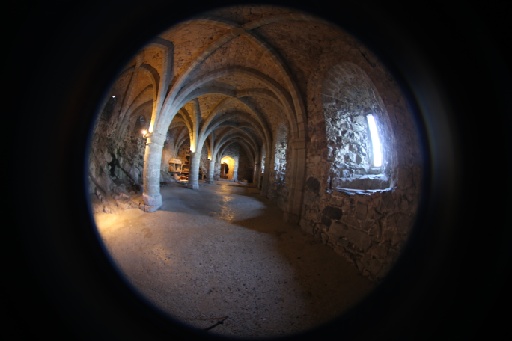 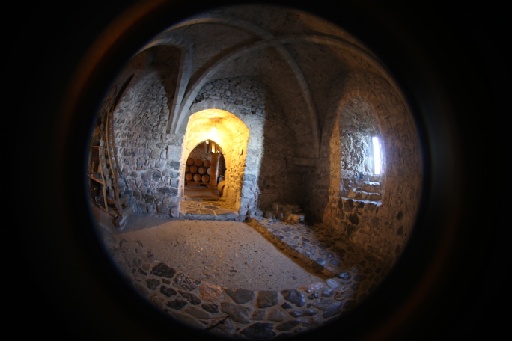 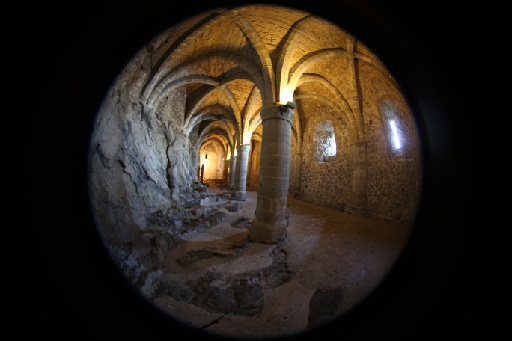 The cellars of Chillon castle once served as dungeons
In its current state, the Chillon Castle is the result of several centuries of constant building, adaptations, renovations and restorations. 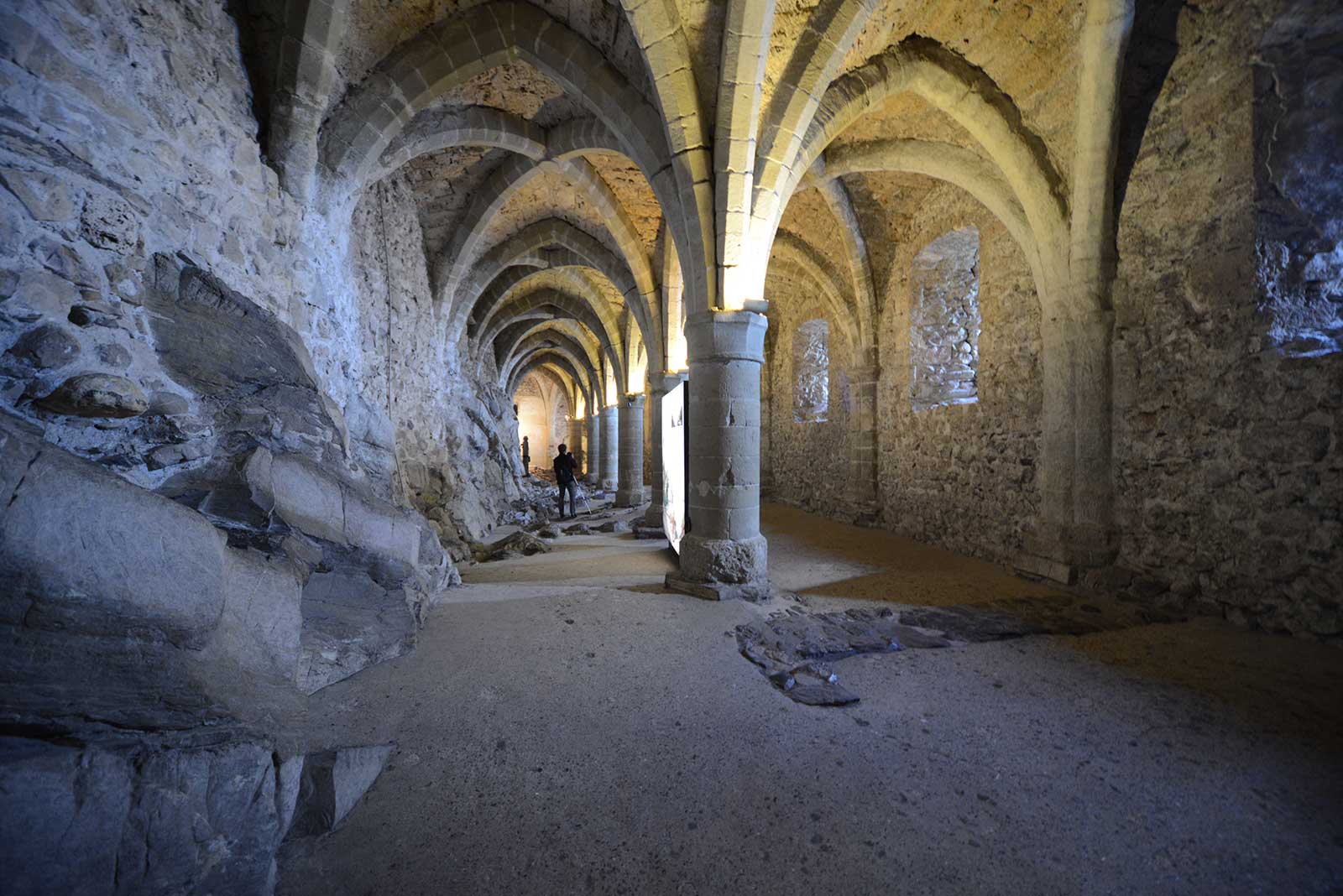 Chillon castle is one of the most visited historical monuments

Our challenge was to map the castle using only consumer-grade hardware. Because the data was obtained by several people in a single day, equipment also had to be light enough to carry comfortably. The following surveying equipment was used to capture the images. 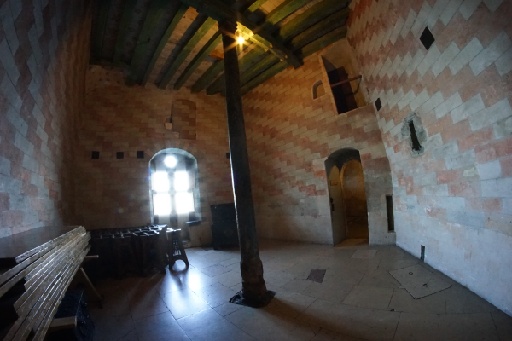 Being a cultural heritage site, no surveying marks were allowed. We used distinctive natural points of the buildings for control points instead.

Most of the points were measured from different viewpoints in both instrument faces; some as a spatial intersection without distance measurement (for example, most of the spheroids on the top of the roofs) and some with reflector-less distance measurement. The least square adjustment took into account the errors of the GNSS-points, also refining them, and led internal to mean standard deviations of 8, 7 and 6 mm in x, y and z. 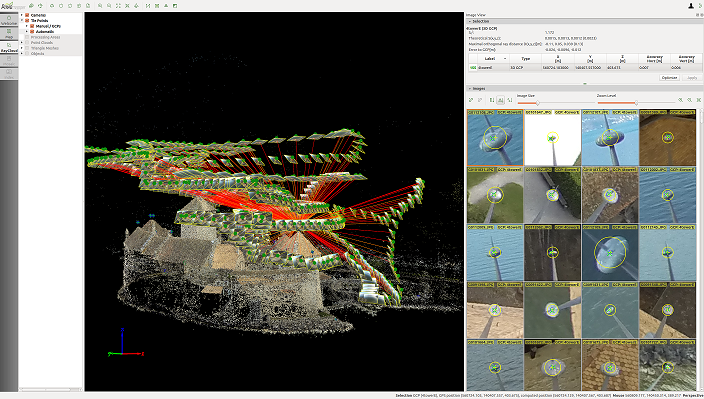 Spheres on the roof of Chillon castle were used as ground control points
The images were captured with a very high overlap (80-90%), which is not difficult to achieve considering the use of many wide angle or even fisheye lenses. More care and overlap is needed to connect the outdoor terrestrial images with the indoor images of the same camera. Since we do not have ground control points for the indoor parts, these connections needed to be very strong - that is, have a very high overlap. 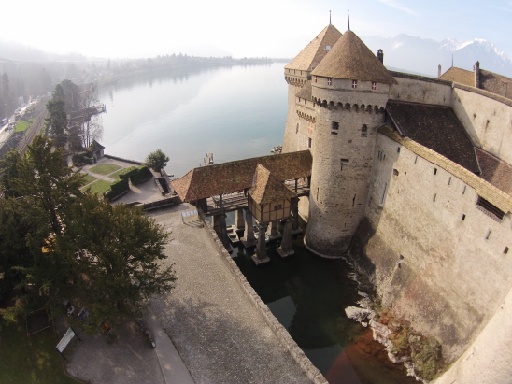 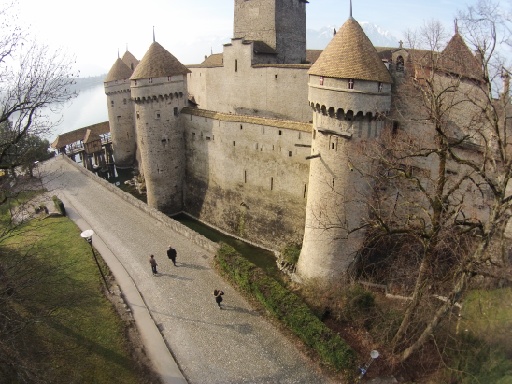 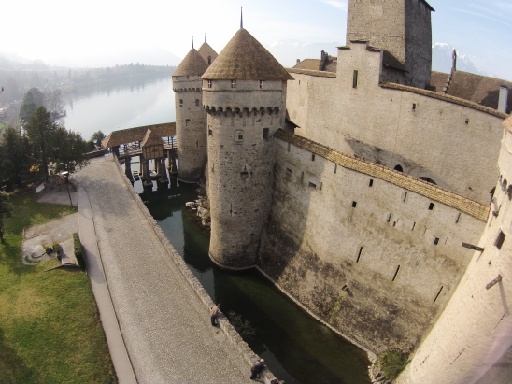 A drone view of the Chillon castle 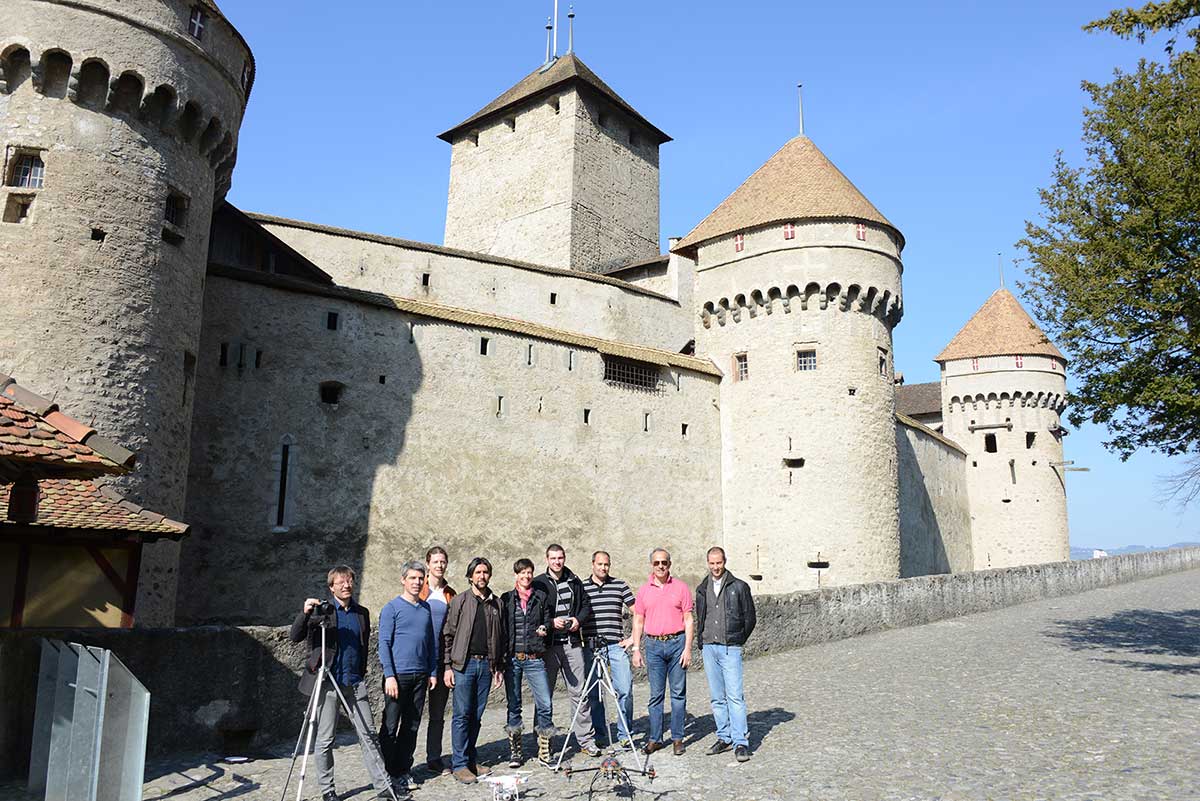 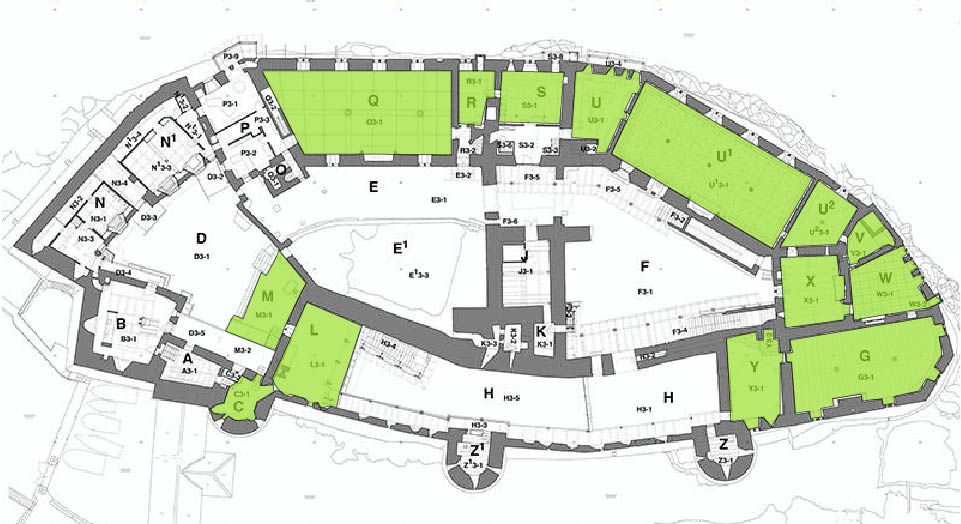 1,885 images were captured from the castle courtyards and inside rooms. More overlap was needed when moving from the outside courtyards through the open doors towards the inside. Geo-referencing is possible from the tachymetric measurements of the towers that are visible from the individual courtyards.

The 1,933 images taken from a tripod connect the inside rooms with two of the courtyards. The reconstruction is geo-referenced by the GCPs visible in the courtyards.

725 nadir and oblique images have been captured from a custom made quadro-copter with a GoPro gimble mount.

712 images have been capture from the courtyards with the DJI Phantom 2 Vision.

469 images have been captured from the lake side (with the DJI operated from a boat) and from the front side of the castle. 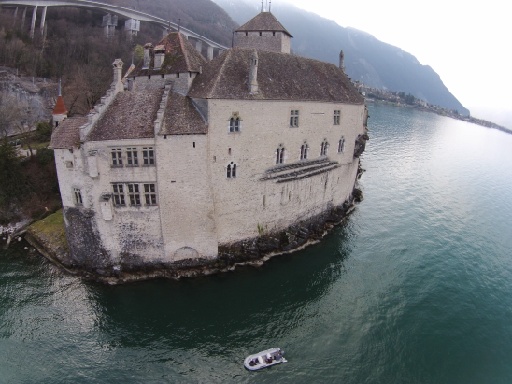 Facade of Castle Chillon captured from the lake

Reconstructing the 3D model in Pix4Dmapper

The model was reconstruced in Pix4Dmapper software. Pix4Dmapper allows you to create projects by merging already computed subprojects. This has mainly two advantages:

In the case of Chillon, the data of the various cameras and sources has been processed independently before combining projects. Each sub project has been geo-referenced with the same ground control points when visible and the quality and accuracy had been ensured.

After this step we merged the different sub projects into larger projects until – finally- all images have been put together. At each step of the merging process, a separate bundle adjustment was performed (“Re-optimize” option in rayCloud Editor). The following sections give more detail in some of the sub projects.

Ensuring accuracy: getting great results with a complex project

The final reconstruction including all images was obtained by creating a new project and merging with existing projects. When merging projects one can use the following cues to bring the individual projects into the same coordinate system by a rigid 7 parameter transformation: 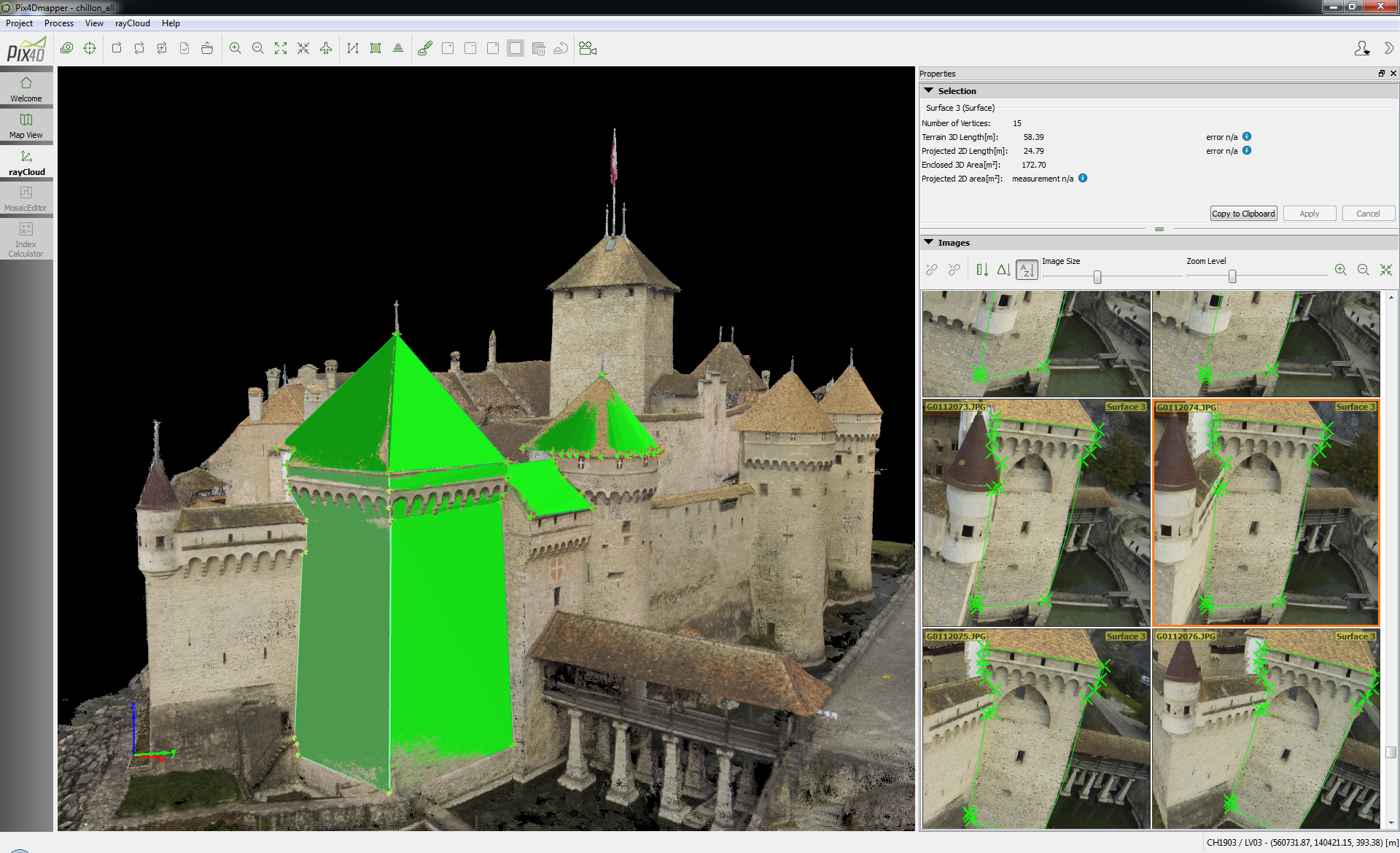 Working with Chillon castle in Pix4dMapper

When merging projects, image features and matches are not recomputed in order to make the merging process efficient a shows the final accuracy of all Ground Control Points after Bundle Block Adjustment of the complete project.

After the initial processing (first step), the external and internal camera parameters of all images are known and will be used for the point cloud densification.

Final 3d model of Chillon castle
In four hours, the thousand year-old structure was mapped. More than 6,000 images were captured, and a 3D model was produced with an accuracy up to 5mm. 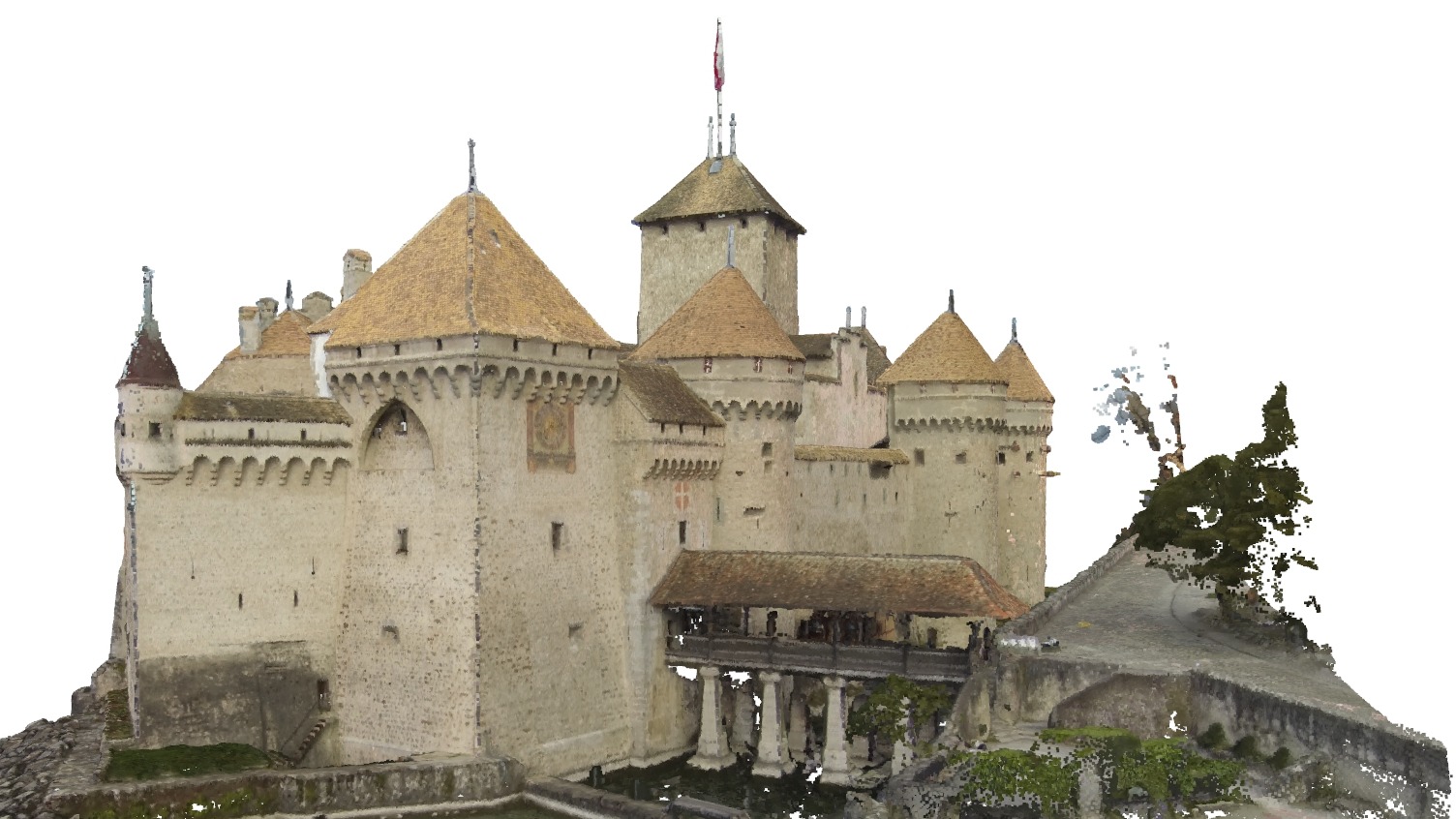 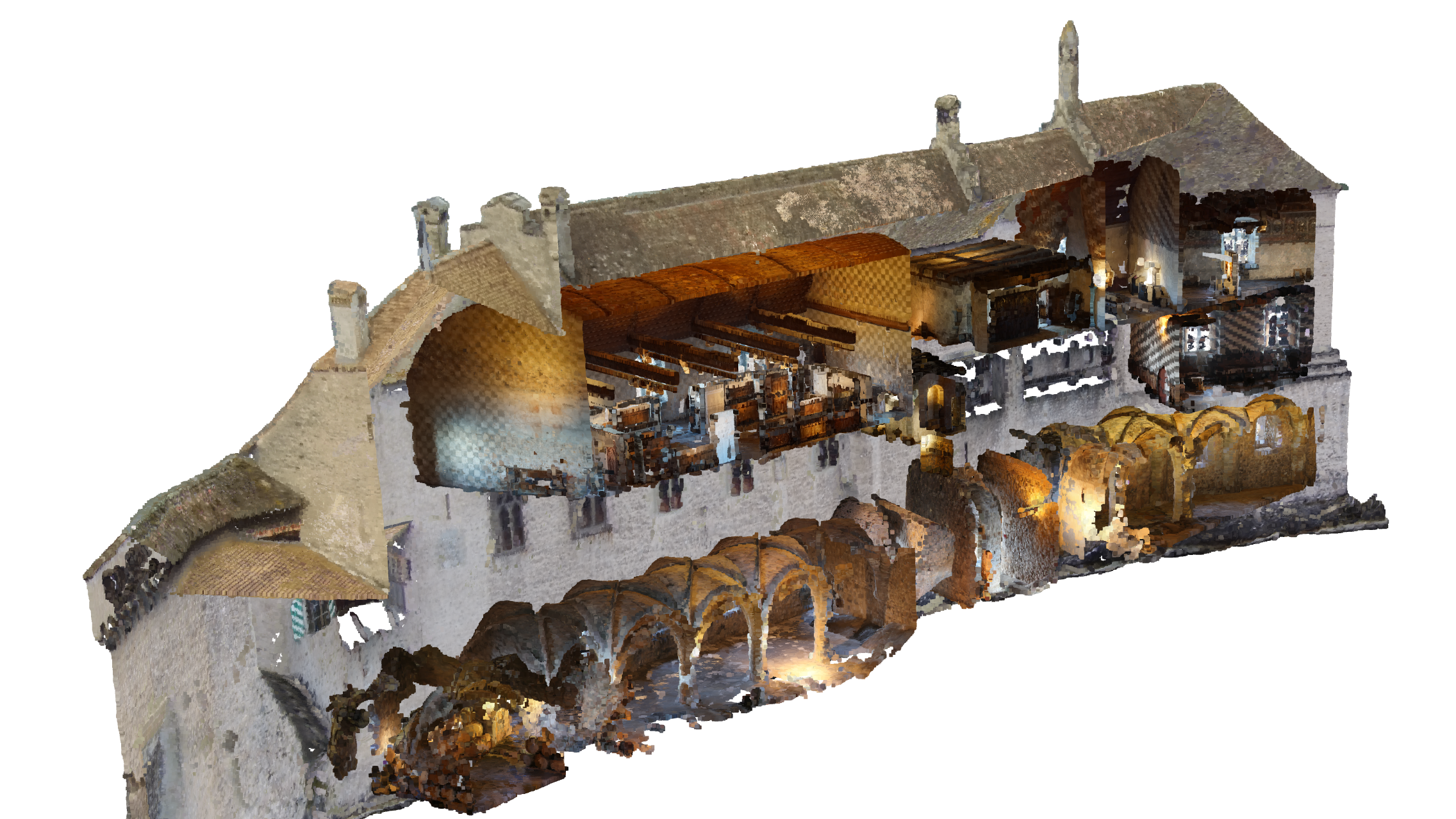 Different views of the 3d model of Chillon castle
As well as proving the value of Pix4Dmapper for architectural projects, the map and model of Castle Chillon is an important artifact which can be explored by people all over the world.
Discover Pix4Dmapper
Professional drone based mapping, purely from images.
Learn moreStart free trial 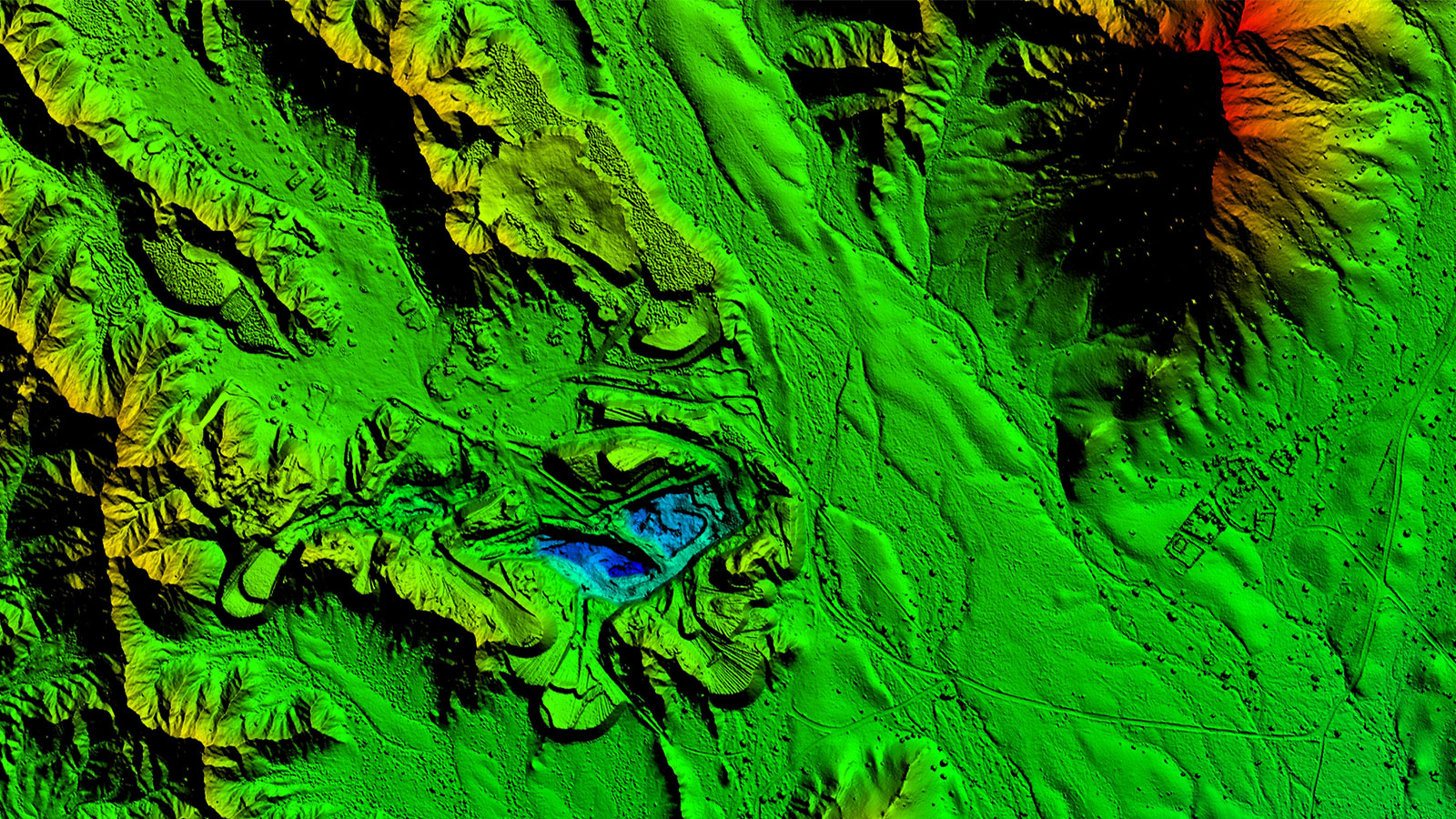