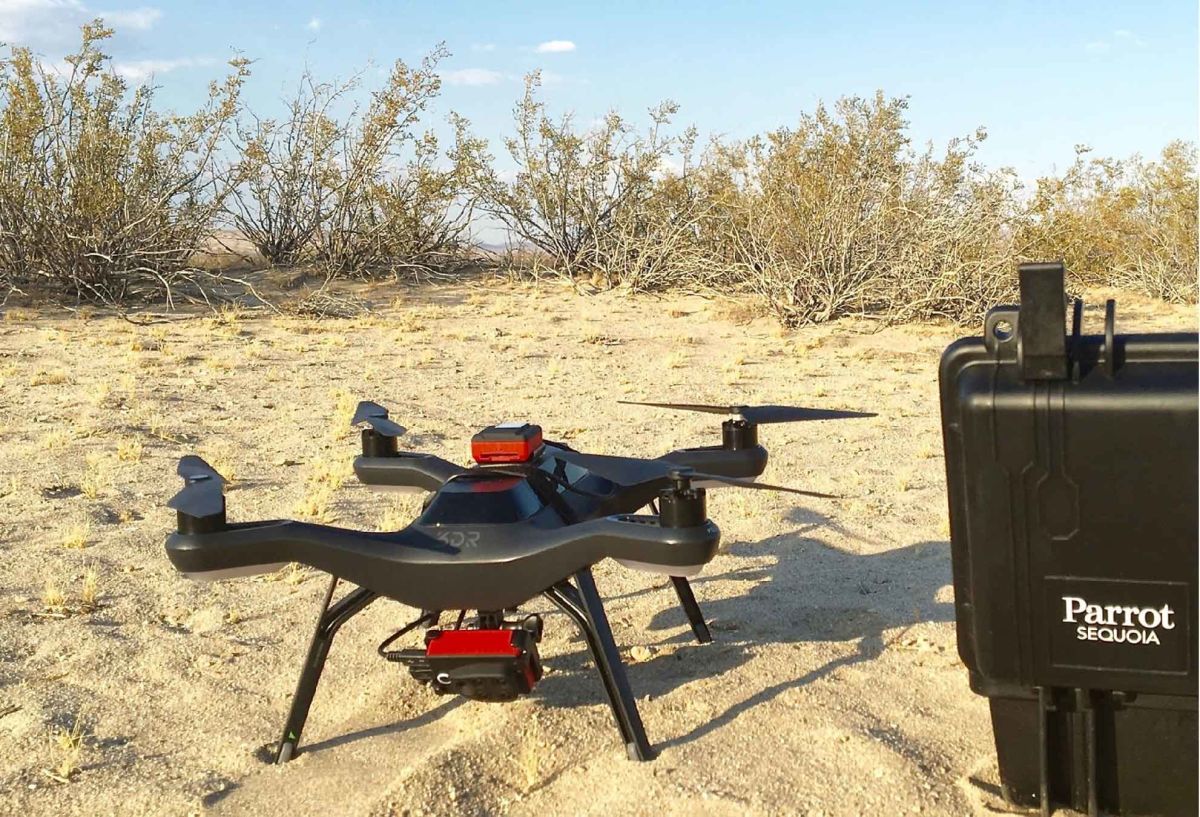 July 20, 2016
Mapping the 1,000 year old shrub rings with a Sequoia multispectral camera helped shed light on how the plant’s physiology changes with age.

Drones have transformed the resolution and frequency that ecosystems are studied and monitored. For this project, Parrot Scientific Program Director Dr. Greg Crutsinger headed to the Mojave Desert with the Parrot Sequoia camera: one of the smallest, lightest multispectral sensors available.

“We used Sequoia to help us address ecological questions about these ancient desert shrubs,” said Crutsinger. “Specifically, do ancient rings vary in productivity compared to their younger counterparts?”

In a single flight, mounted on a drone, Sequoia captures images across four defined visible and non-visible spectral bands. The camera also captures RGB imagery, which can later be processed in photogrammetry software to create high resolution maps with several rich data layers.

“If estimates are correct, the King Clone germinated when wooly mammoths still roamed the earth,” Crutsinger said. “Now that’s impressive, for sure, but we also wonder what that kind of aging might mean for the plant itself.” 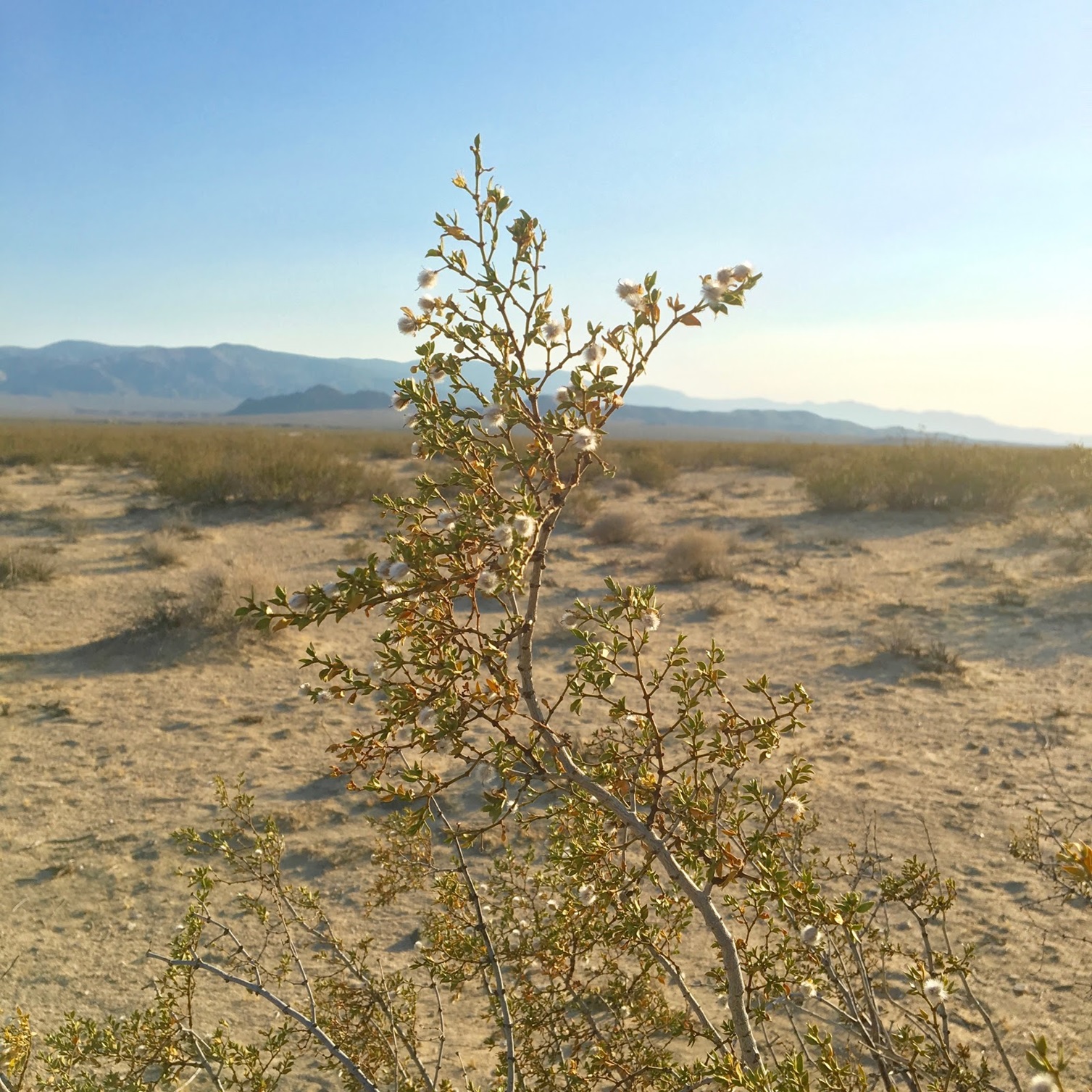 Prone to extreme temperatures and without any natural cover, the Mojave desert is a tough place to live by any measure. It receives less than 13.7 cm (6 in.) of rain per year, the driest of all North American deserts. One species thrives in the Mojave, however: the creosote bush (Larrea tridentata), an evergreen shrub that grows 1 to 3 m (3-10 ft) in height and boasts bright yellow flowers.

Creosote shrubs can live a long time, and as they age, their oldest, most central branches die off and the crown splits apart into a ring pattern. These rings appear to march, spreading out over the years; however, each new plant is actually the same genetic individual — meaning they’re clones.

The oldest known creosote clones are in the Lucerne Valley, California. Referred to locally as the ‘King Clone,’ this ring has been estimated by scientists to be over 11,700 years old and spans over 40 ft (15 m) in average diameter.

By mounting Sequoia on a 3DR Solo drone, Crutsinger was able to map a King Clone and surrounding shrubs in a single, 10-minute mission at 30 m altitude. In only a single flight, Sequoia captured data for a variety of ring sizes. Greg then collaborated on the data analysis with Pix4D’s technical communication team.

The ‘King Clone’ of creosote (Larrea tridentata) in Lucerne Valley, California, is the large ring near the center of the map. Note the black car on the road shown for scale. (R-G-B and NIR-R-G images)

“Field researchers across the globe use Pix4D photogrammetry software for data processing and analysis in plenary applications,” states Oliver Küng, co-founder of Pix4D, “Everything from coastal monitoring to archeological sites.”

Pix4Dmapper stitched and rectified the Sequoia imagery, creating a high resolution orthomosaic in both color (RGB) and multispectral data layers. Focusing on a sub-sample of 60 shrubs that ranged from 1.2 to 23.5 m in diameter, the team then used the Sequoia’s multispectral data to calculate the average normalized difference vegetation index (NDVI) across the different ring sizes.

NDVI map showing multispectral data from Sequoia of the clonal creosote rings (including the King Clone) in Lucerne Valley, California.

The conclusion? There was no relationship between ring size and NDVI (Figure 1), without or without the King Clone included in the dataset as a statistical outlier (r = 0.005, P = 0.96).

Relationship between the diameter (measured at the widest point in meters) of creosote shrub rings and the average (shrub level) NDVI.

“The result suggests that the physiology of ancient shrubs, or how they function in this extreme environment, may be similar to shrubs several millennia younger,” said Crutsinger. “Mark Twain once said that age is an issue of mind over matter: If you don’t mind, it doesn’t matter. That certainly seems to be the case with creosote in the Mojave.”

Drones have already transformed the way ecosystems are studied and monitored. It’s easier and faster than ever to get a large amount of rich, accurate and actionable data. And with the Sequoia camera in particular, scientists now have an incredibly powerful tool to complement traditional vegetation data collection on the ground.