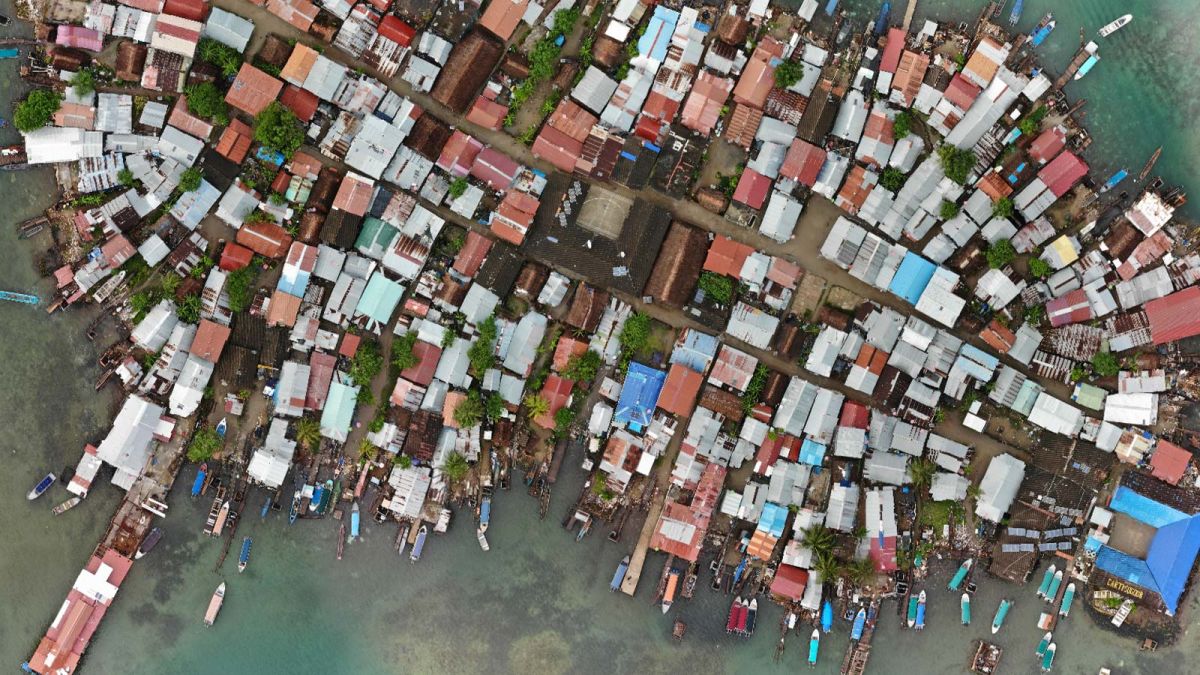 July 6, 2021
How can drone mapping help an overpopulated island threatened by climate change off the Panama coast? Enter PIX4Dmapper.

Climate change is affecting countries all around the world differently. Some are seeing more extreme weather events like hurricanes, whilst others are experiencing rising sea levels. Although many countries are transitioning to green energy and repurposing old fossil fuel plants, others are having to face climate change already. Some of the people most vulnerable to ecological changes are indigenous populations, who often live in delicate balance with their local environment. This is what happened with the Guna population in Panama, who are facing rising sea levels at the same time as overpopulation on a small island. They needed to analyze the land use as well as plan for potential relocation to the mainland.

Panama Flying Labs, hosted by the Universidad Tecnológica de Panama, has a team of 5 people working at the university alongside a network of volunteers. As a group they offer training and assistance in work to do with drones and data. They are used to projects that analyze climate change’s impact. Towards the end of 2019, they worked on a project with the community of Gardi Sugdub, an island close to the Panama mainland. The island is part of the San Blas Archipelago, where the majority of the Gunas live, and is known as the Comarca Guna Yala. 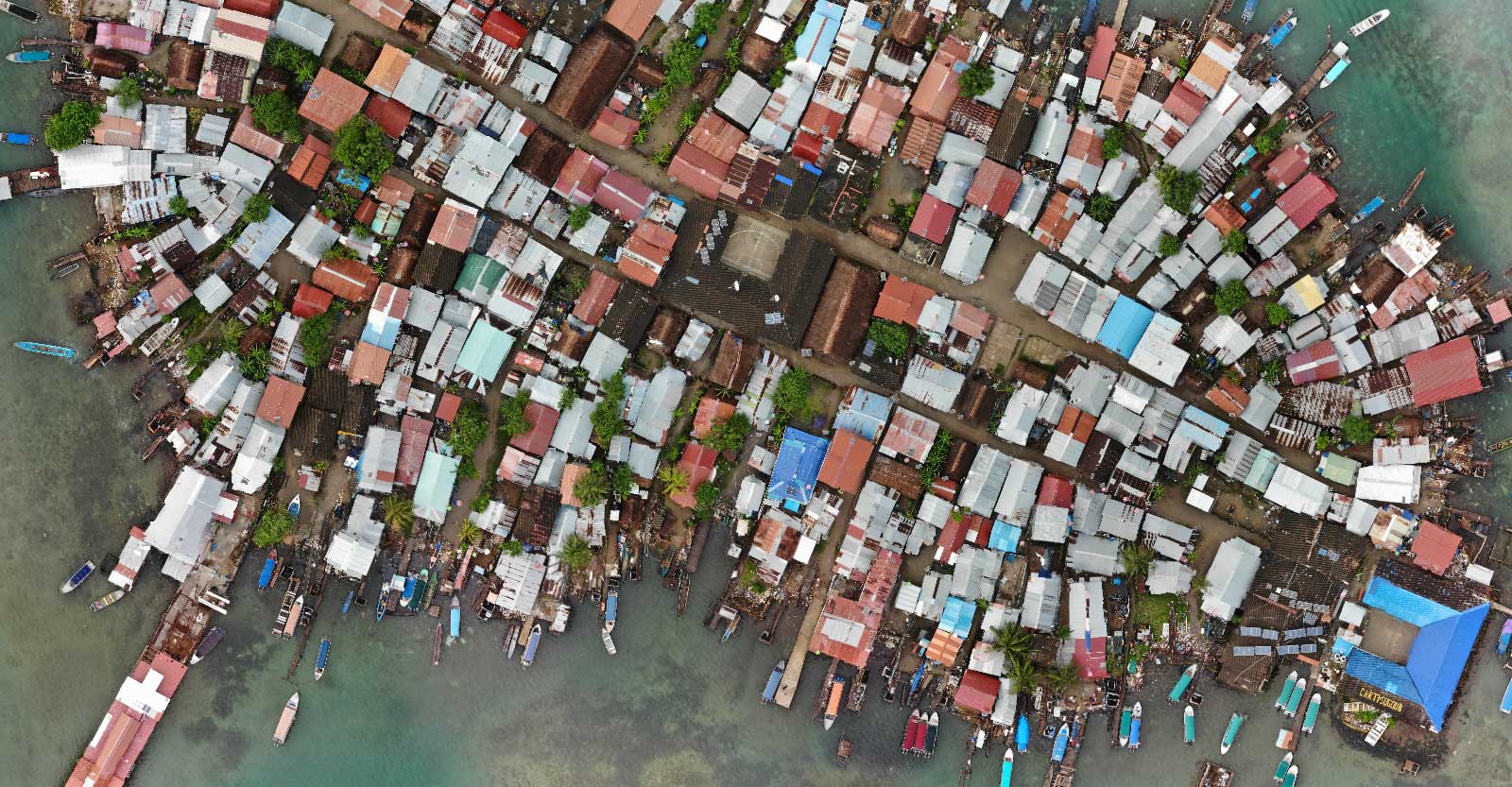 The island chain is sinking under rising sea levels while at the same time the population is growing. As a result, there is unsustainable resource pressure on the islands. There is a large project aiming to relocate the population to the mainland, and the authorities needed to look at available land to see where the Gunas could be relocated as well as assess the current state of the largest islands. Flying Labs was part of this land surveying project, using photogrammetry software to assess terrain on the island and on the mainland. PIX4Dmapper was the ideal tool for this project as it is well-suited to detailed surveying projects.

This is first and foremost, a delicate project. It is difficult to relocate a population, especially indigenous ones that have close ties to the land. The Guna live across several islands, but offering this relocation gives them the chance to also expand, as the population is growing too large for their current home. 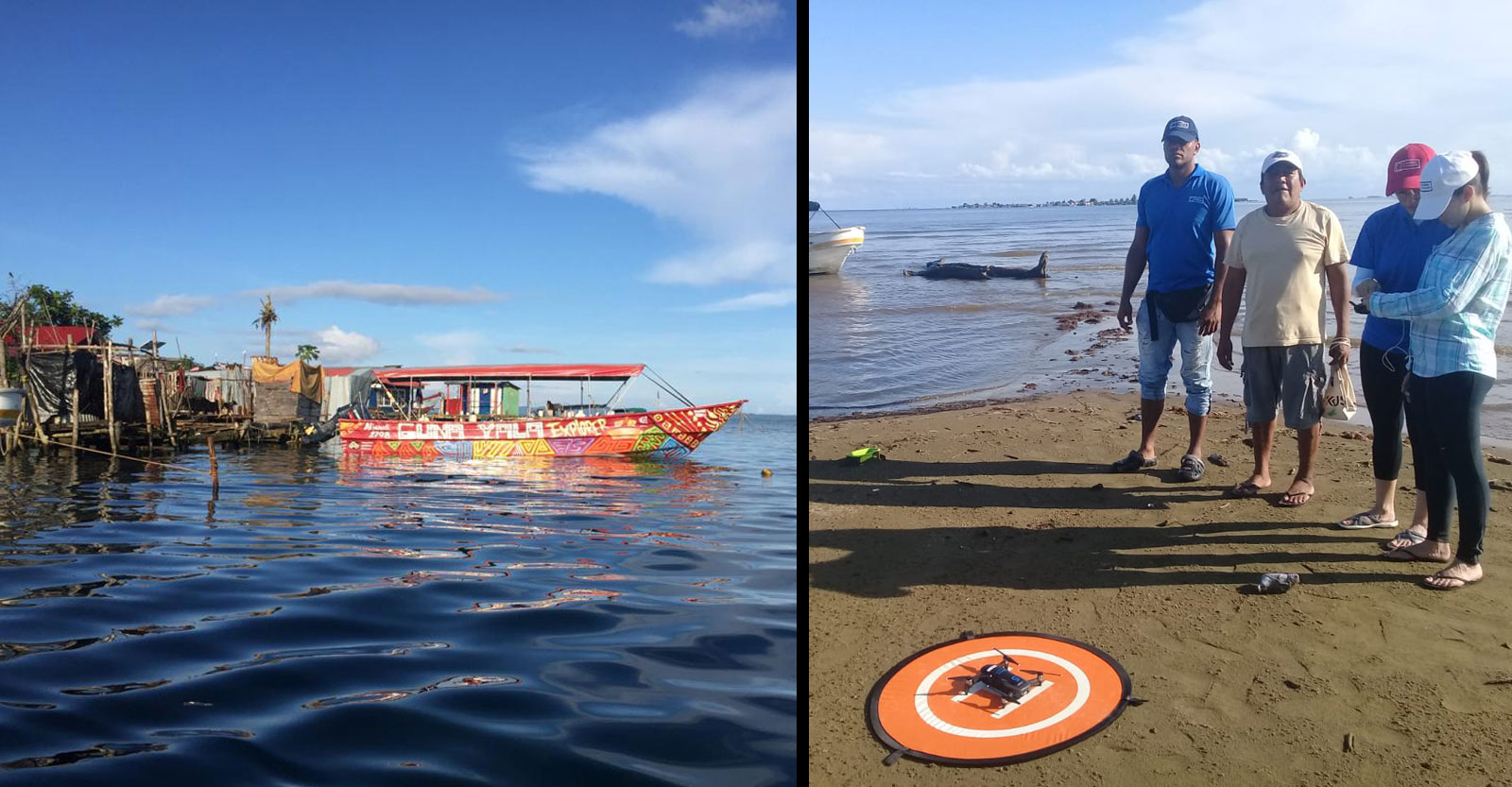 The surveying project was launched by the Inter-American Development Bank, which kept in contact with the Guna. This meant the affected population had a say in how the work was handled and could provide their own insight, which is incredibly valuable for understanding the logistics of potentially moving a large population. Many indigenous tribes or groups are forcefully relocated or not given a chance to influence the decisions made by planning authorities.

Panama Flying Labs surveyed several different areas which were spaced out from each other. They frequently had difficult access due to the terrain not having good infrastructure. They traveled between the sites, spreading data collection across two days in October 2019. They had to pay attention to weather forecasting, as this is during the Panama rainy season. The team aimed to generate orthomosaics, which are a great tool for visualizing and measuring distances or areas over a space of land. Additionally, orthomosaics are easy to interpret, making them helpful in decision-making processes as they can be presented to large groups with no surveying knowledge and convey helpful information. 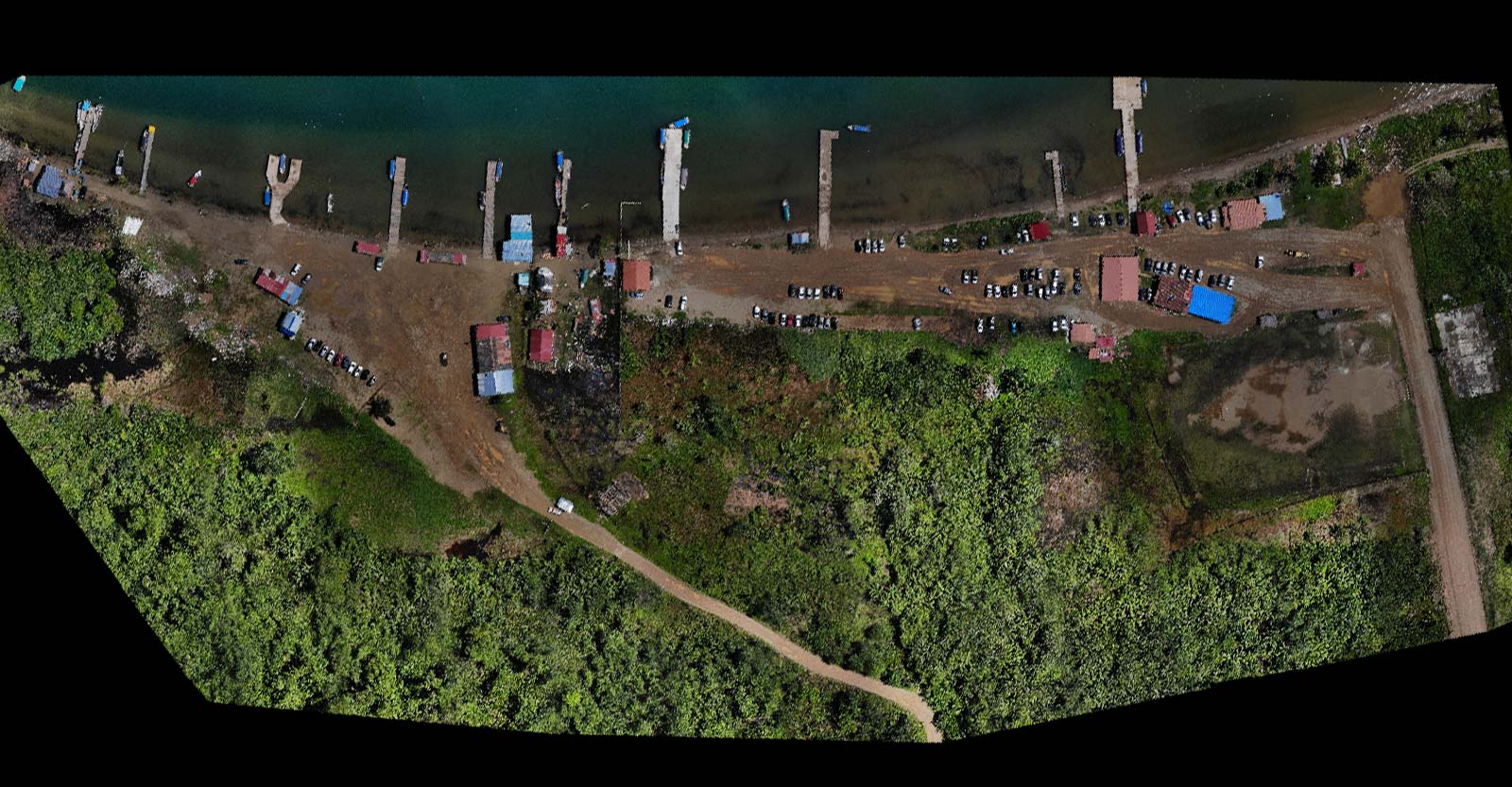 New locations are being proposed to relocate the indigenous population

The Flying Labs team worked with the Gardi Sugdub Committee, who helped make decisions and keep the local population informed about progress. The team received remarkable support from the locals who helped guide them through the new areas being mapped, including island walking recognition and providing transportation by car and boat.

Before the Flying Labs team could even start surveying, they had to first access the locations to be mapped. They traveled from Panama city to Gardi Sugdub, taking several hours across main roads as well as rural mountain routes. Finally, they traveled by boat to reach the target areas, trying to carry as little equipment as possible to make their transit easier.

The rain did delay some of the planned flights, but as the team worked across multiple days, they were able to mitigate the impact of this. It was very warm at the same time, which affected the autonomous features of their hardware and software. The drone struggled to take off due to a checklist failure, and the data collection failed for two trajectories of the flight plan. The team had to place the drone and their flight planning hardware under shade and then in the range of the car’s AC before doing a second flight to recapture the imagery they had lost. 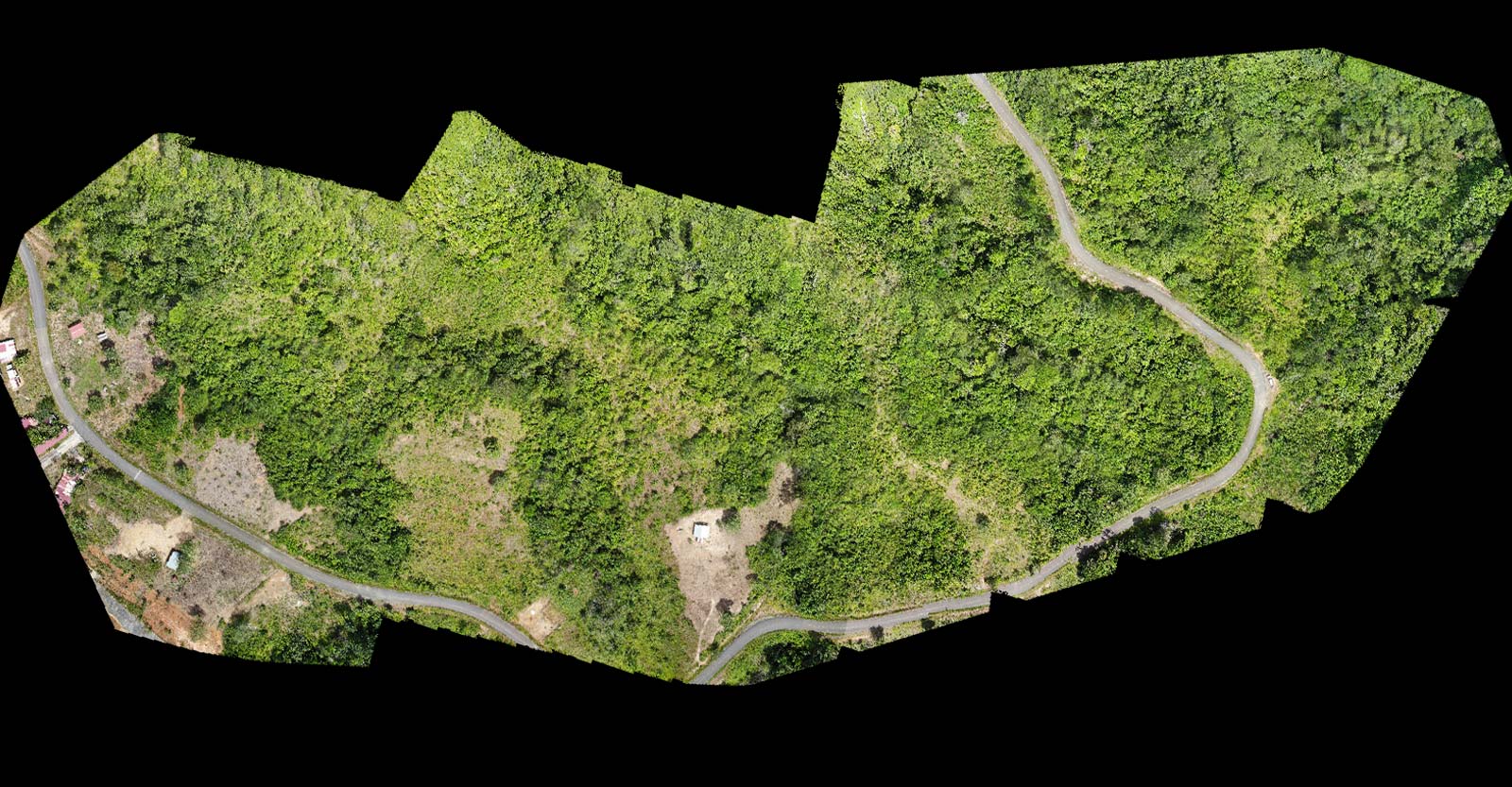 The orthophoto clearly shows the current state of alternative locations

Once the data was collected, they generated 2D maps with all the settings left with the default options in PIX4Dmapper, apart from changing the image scale to full (the keypoint image scale being equal to 1). They surveyed several areas, totaling 8 datasets from which the team created several outputs. They then generated a Digital Terrain Model (DTM), and included contour lines to help with terrain analysis. Across all 6 datasets, 70 - 100% of the images were calibrated.

PIX4Dmapper’s settings enabled quality outputs to be exported to other software and applications by using formats such as .TIF and .KML. Similarly, the quality report summarized the key information about the data and helped identify the location of images that were not calibrated, keeping the team informed about where there may be gaps in the surveying project.

When Flying Labs and their team of volunteers had the results they needed, they set up two workshops. They invited the local community to the sessions, explaining the results and implications. This meant that when it came to decision-making, the people who would be relocated were involved in the process and understood the information presented to them. 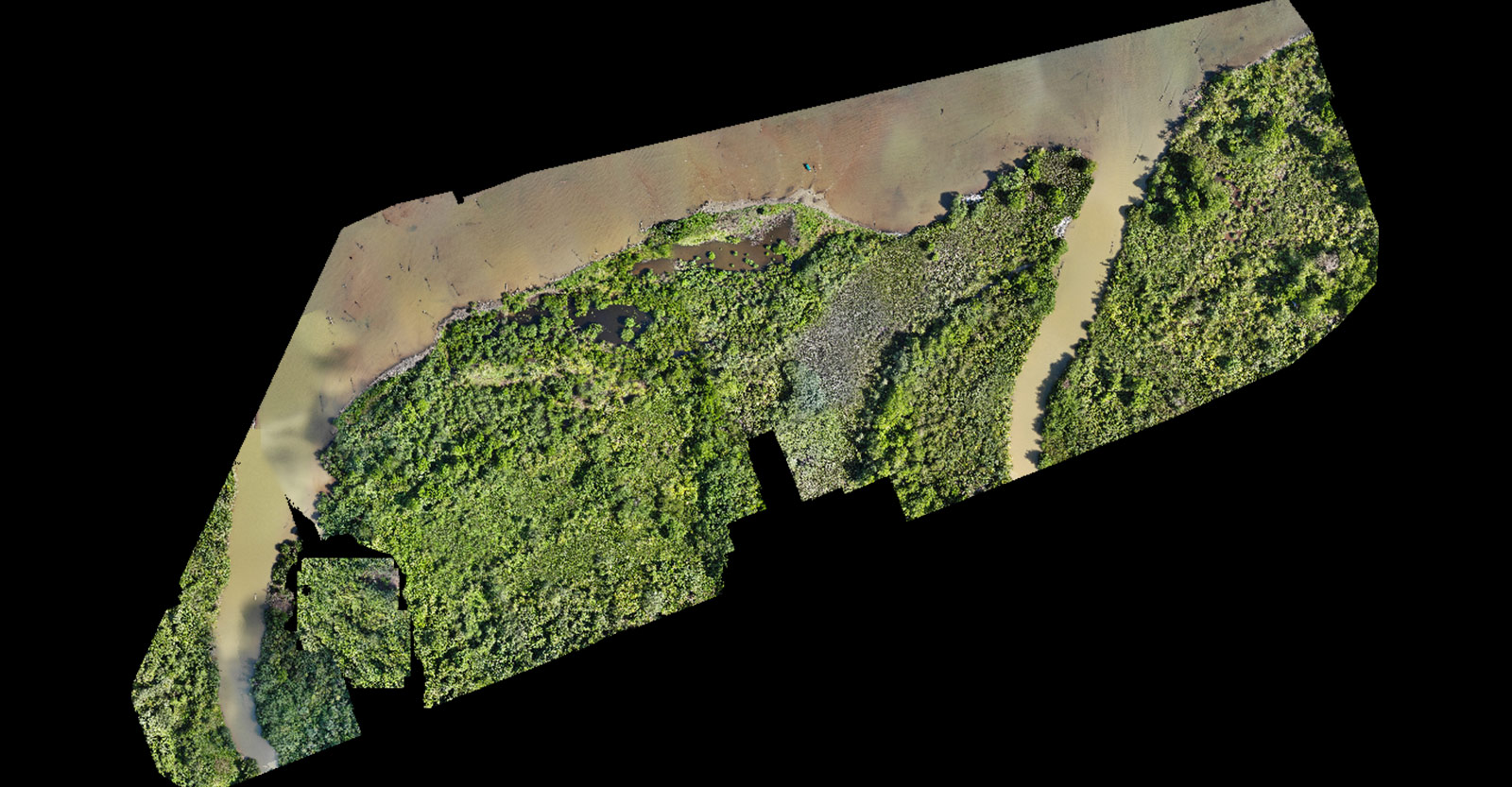 By gathering and sharing this data, Flying Labs was a part of empowering the indigenous community, helping them make informed decisions about their future. The outputs from PIX4Dmapper were actionable and useful and can be helpful in deciding the future of important sites, including protecting indigenous architecture or helping plan for land use in a way that uses environmental knowledge to find the optimal solution. In a situation like this, where time and space are influential factors, photogrammetry helped find a solution to a delicate challenge. Difficult situations like this will be more common over the coming decades with rising sea levels. However, vulnerable communities need to be a part of decision-making, and when empowered, this can bring about positive change for everyone.