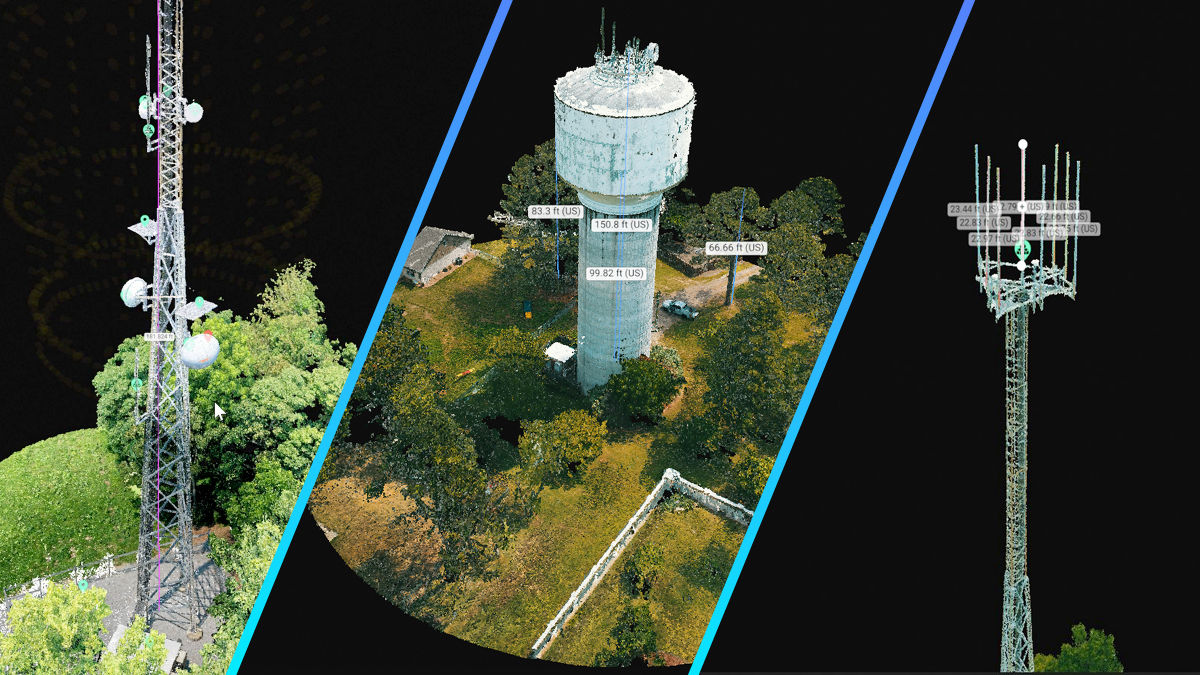 Telecom is an ever-changing industry and the continued rollout of 5G means that telco companies need to upgrade cell towers. Drones are speeding up inspection, maintenance, and installation processes. An aerial inspection with a drone provides imagery that is processed by specialized software PIX4Dinspect to create a digitized, accurate 3D model. The workflow can speed up telecom inspection operations by at least 60%.

The flexibility and power of this solution have been adopted by Motorola Solutions, a telecom operator and network provider. In a recent webinar with Pix4D, they shared how they are using PIX4Dscan and PIX4Dinspect to optimize their inspection operations.

PIX4Dinspect is a cloud-based inspection platform that uses machine learning and AI to produce intelligent digital twins of assets for inspection. The software and its algorithms have been tailored for highly accurate telecom inspections. PIX4Dinspect is paired with the drone flight planning app PIX4Dscan which optimizes image capture - capturing the fewest images possible for a comprehensive 3D model. The workflow has cut some inspection times from 24 hours to just 1 hour, as the data collection, processing, and analysis are sped up by the sheer time savings of using aerial images for inspections rather than asking tower engineers to climb and take manual records.

Motorola Solutions are using PIX4Dinspect in several ways, which include: Installation surveys - to inspect an asset and assess how to install new equipment, create a plan, and ensure the work has been completed successfully Quality inspection - to ensure all new equipment has been correctly installed and located, and provide a closeout package for their own records or to share with clients/collaborators. Emergency survey service - the MERT (Motorola Emergency Response Team) will identify equipment damaged by storms or lightning and report back in a rapid manner to plan repair work.

Antenna installations on a tower or structure involve several steps. Firstly, the installation area must be inspected and analyzed to plan the location of the new equipment before an antenna nest can be put in place.

In one example, Motorola Solutions was looking to install 8 antennas on top of a tower and needed to measure each of the antennas to make sure they were angled at 90 degrees (with a margin for error of 2 - 3 degrees). This is the optimum antenna angle for the strongest coverage. After installation, an engineer used PIX4Dinspect to do an inspection. The cloud-based software created an intelligent digital twin that the engineer could then analyze. 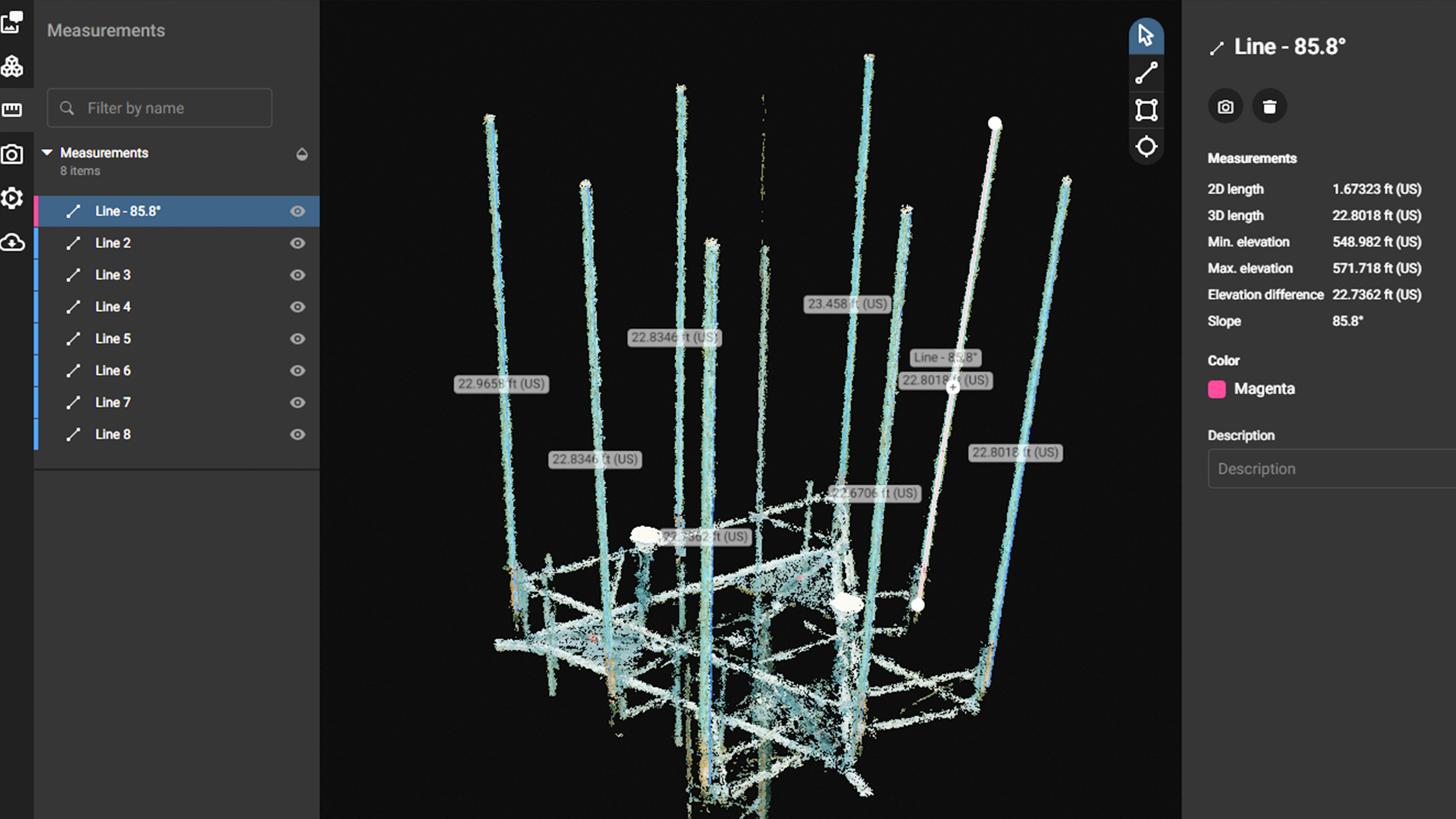 First, they used the line tool to ensure all of the antennas were at optimal angles. Each new element was labeled and annotated to keep as a permanent record. Then any unused equipment on the tower, any lights, and GPS installations were also identified. Finally, the total findings were compiled in a report that Motorola Solutions will use as an internal record as well as share with a potential client looking to rent space on the tower.

Identifying equipment out of alignment with aerial imagery

Assets already installed on a telecom tower can move out of position for a variety of reasons. It could have been damaged or impacted due to extreme weather such as wind storms, or even by accident if someone is working on a separate part of the tower. Motorola Solutions use PIX4Dinspect and PIX4Dscan for automated inspections that can identify an item out of position. 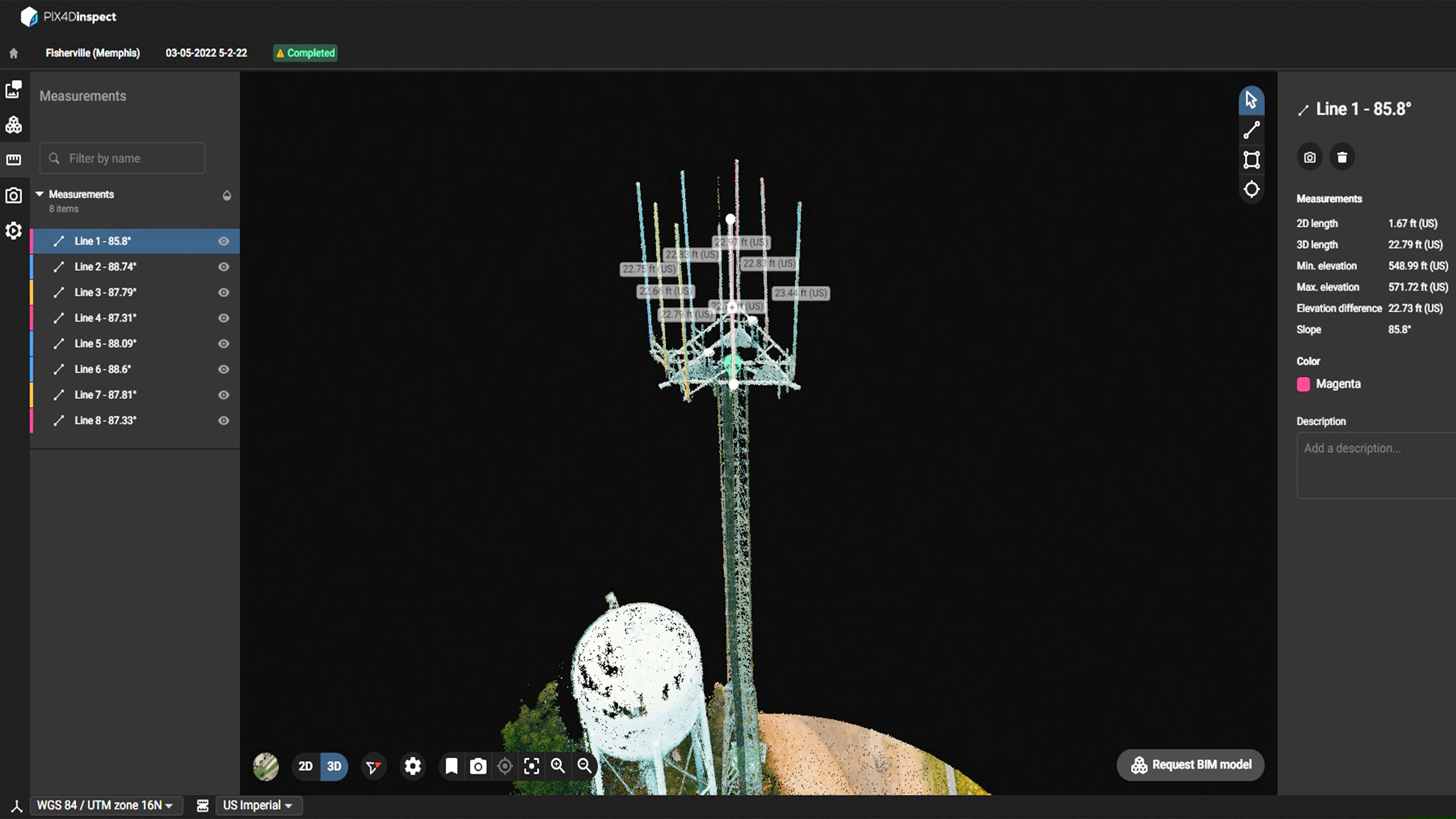 Antennas out of position

In this example, a helix flight plan was used for PIX4Dscan to carry out the inspection. After completion, the imagery was uploaded to PIX4Dinspect. An engineer analyzed the quality of installations and found that two of the antennas were off by at least 3 degrees. This is outside of the acceptable margin of error and meant a tower engineer would need to climb and re-set the antenna. This would improve coverage in the area and save Motorola Solutions future issues caused by the misalignment.

The automatically generated reports from PIX4Dinspect are ideal for summarizing the findings on an asset. One tower owner wanted Motorola Solutions to check on installed equipment and remove old materials. However, as the team had completed a survey the month before, they already had a digital twin available which saved all parties involved an unnecessary trip to the tower to reinspect it. As PIX4Dinspect is a scalable solution, Motorola Solutions are able to store their network of assets on an interactive map that they can re-visit or share with clients at any time.

Motorola Solutions simply identified the relevant tower and opened the file for the tower. One engineer looked at the digitized telecom tower and annotated the items that needed to be removed, using the information provided by the client. 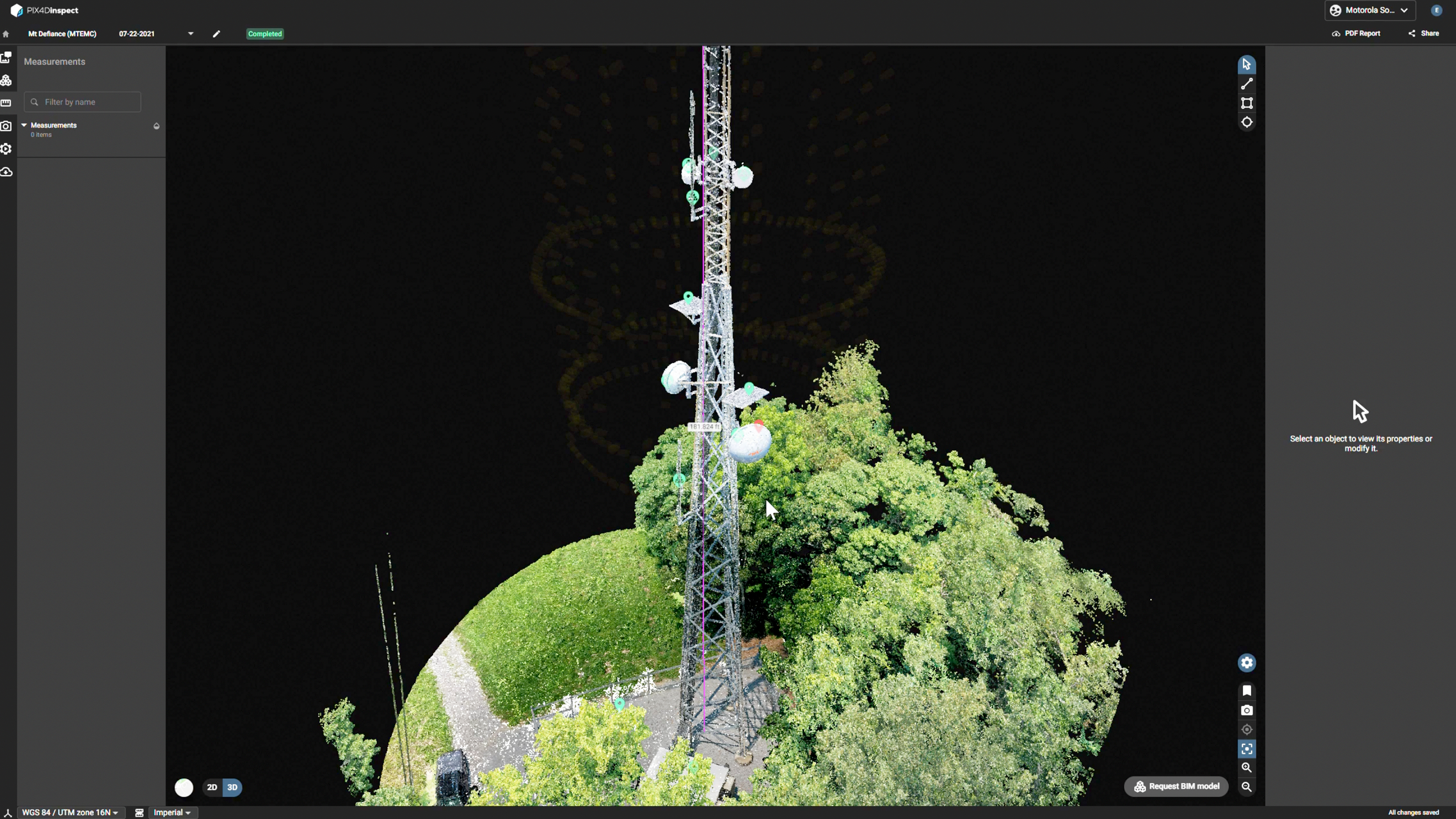 They then generated a report that was shared with the tower crew, who used it to confirm the three items that needed to be removed. This prevented any material from being mistakenly removed as it provided clear instructions.

Although PIX4Dinspect and PIX4Dscan have specific features for standardized cell towers, they are adaptable tools that can analyze equipment that is not on a tower. For example, Motorola Solutions have also used PIX4Dinspect to survey a water tank where they had to custom mount a µw dish. As it is a non-standard item, they had to carefully plan the installation. PIX4Dinspect provided an accurate 3D model that they could easily analyze and use to plan how a tower crew could create the mount and safely install the new dish. 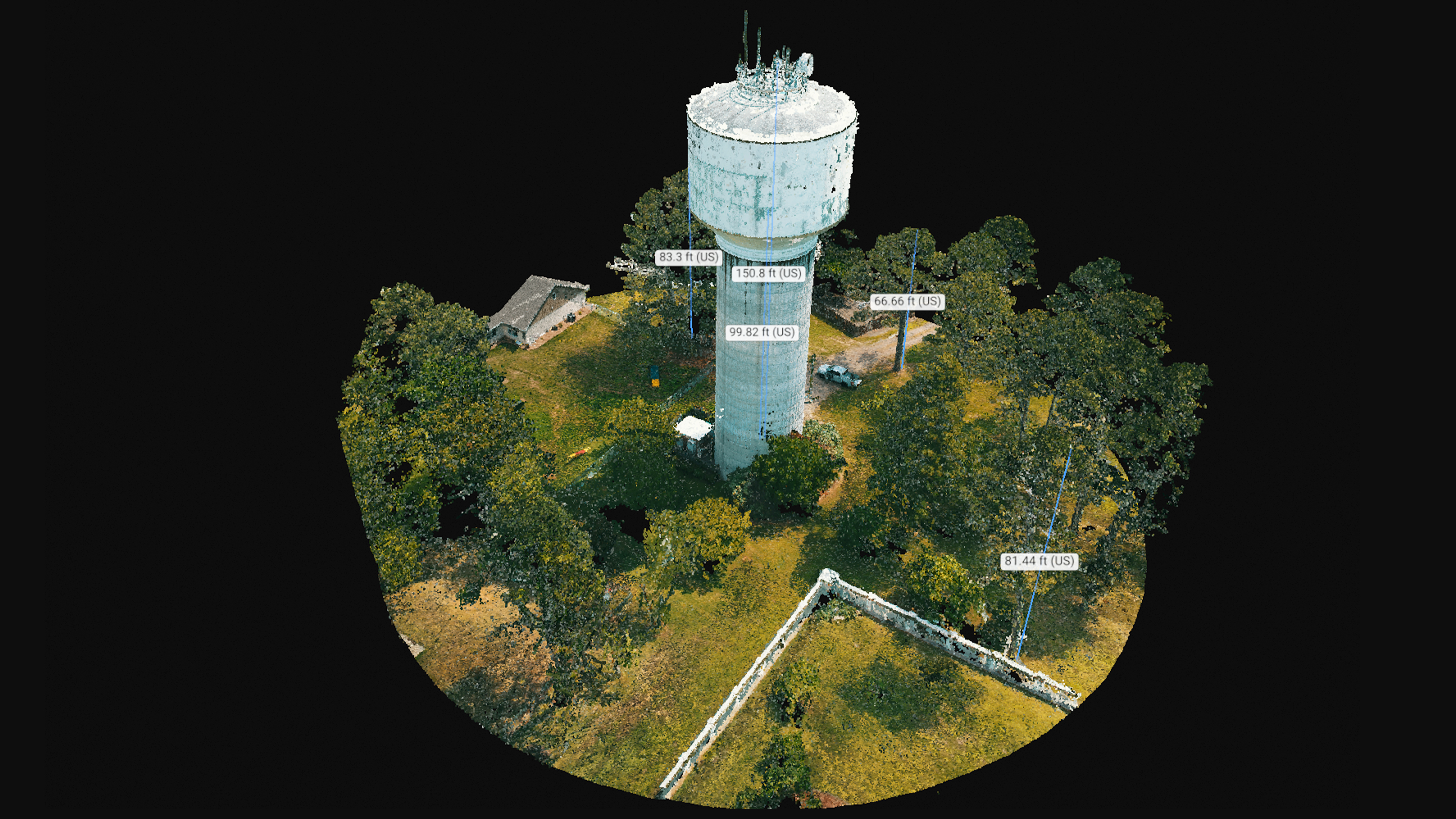 The flexibility of PIX4Dscan and PIX4Dinspect has helped Motorola Solutions streamline operations and identify maintenance needs, as well as prevent errors. The optimization of inspection workflows has saved them time and money, as well as improved safety thanks to reducing the need for inspection climbs. The continued roll-out of using drones for telecom inspections and asset analysis will only continue, especially when coupled with intelligent digital twins as in the case of PIX4Dinspect.